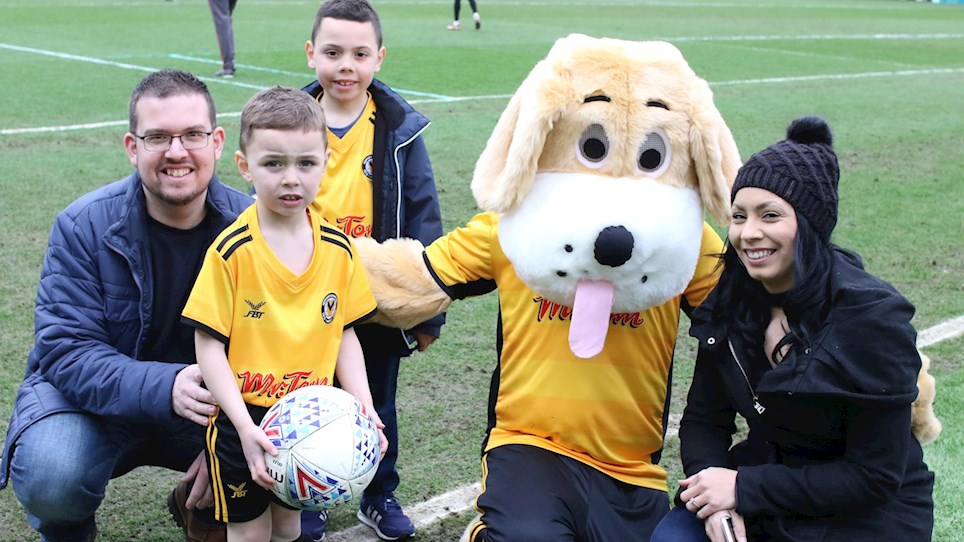 STEVENAGE FC| Join us for our Family Fun Day!

A first goal of the season for Chris Whelpdale was enough for Stevenage to get all three points as Newport County AFC suffered a 1-0 defeat at Rodney Parade.

The away side had a whole host of chances in the first-half, Jamie Vardy's V9 academy graduate Danny Newton passing up the chances on several occasions, although the pressure finally told as they found their goal on 40 minutes.

Crosses into the area were clearly the best route to goal by Stevenage in South Wales and that was how they eventually found the net. Captain Ronnie Henry did well to provide an overlapping run to right-back Joe Martin, before producing another inch-perfect delivery for Whelpdale to head home from close range.

More chances fell the way of Newton in the second-half, but the striker couldn’t add to his 15 goals already this campaign, while Ben White and Mickey Demetriou were required to clear chances off the goal-line.

The defeat means the Exiles drop one place in the League 2 table and down to 13th position, with the gap on the play-off positions increasing ever further to 11 points with just six matches remaining this season.

Mike Flynn elected to make two changes to the side that last played on Good Friday in the draw with play-off chasing Coventry City after Easter Monday's trip to Chesterfield was postponed.

The first alteration saw Mark O’Brien miss out on the matchday squad with an unspecified injury, as Aaron Collins returned to the starting side after some impressive displays of late.

It wasn’t specifically a like-for-like change; therefore, Flynn changed the familiar County formation of 3-5-2 to more of a 4-4-2 line-up from the first whistle.

The other change was a more straightforward one and it came up-front. Paul Hayes was forced to withdraw with the calf injury sustained last time out, as Frank Nouble came in from the start for the first time since 24th February.

Stevenage manager Dino Maamria elected to name the same team for the third successive game, although their last result more specifically was an emphatic 4-1 victory at home to struggling Barnet on Easter Monday.

That was the former County assistant manager’s first win at the helm of the Hertfordshire club, and they matched the Exiles with a 4-4-2 formation at Rodney Parade – Danny Newton and Alex Revell who both scored two last time out leading the line for the away side.

And it was one of those strikers who played a role in the first chance of the game being created in just the 5th minute.

Joe Martin swung an inviting free-kick from 35 yards into the six-yard area, with Revell causing Day to miss the ball when attempting to punch clear, although Luke Wilkinson couldn’t capitalise on that error as his header drifted narrowly wide of the far post.

It was certainly a well-contested battle from both sides to start proceedings, very few other opportunities being created, although you would have to say that the away side had the majority of the possession in the opening 20 minutes.

The best opportunities from a County perspective came from the energetic Collins, ghosting past players on the left-side like they weren’t there, although Padraig Amond couldn’t get the right connection to a cross and chipped an effort over the crossbar.

A change out-wide seemed to get more of a foothold on the contest for the Exiles, Collins switching from left-to right and vice-versa for Nouble, with the Wolves loanee having the same effect on the other side.

He had the beating of Joe Martin on the right-hand side after 24 minutes, although resisted the temptation to take a shot after cutting inside and instead laid the ball into the path of Robbie Willmott, but the shot was blazed over the crossbar.

The away side were still imprinting their style of football onto the game, however, and another error in the County box almost presented them with a glorious chance to take the lead exactly on the half-hour.

Day again failed to come and clear a dangerous looking cross into the area, with the ball presenting itself to Newton eight yards out, only for Mickey Demetriou to expertly read the situation and somehow clear the attempt off the goal line.

If a goal were to come before half-time, the warning signs were certainly there that Stevenage would be the side to get it.

And the goal finally came on 42 minutes as Chris Whelpdale scored for the first time this season.

It was the product of yet another scintillating cross into the area from the away side, this time captain Ronnie Henry making an overlapping run to latch onto Martin’s long-ball before crossing the perfect delivery into Whelpdale to head home across goal from all of four yards.

The indication of three minutes additional time couldn’t inspire the Exiles to find an instant response, however, and the visitors may have actually had a bigger advantage with 30 seconds of the half remaining.

Newton was again the architect of the opportunity, driving from half-way and past three County challenges with intent, although couldn’t quite get the bend on the shot as it clipped the post on its way out.

That brought proceedings to a close in the first-half and there could no complaints with Stevenage having a slender advantage following their superior opening first-half.

Whelpdale was in the right place to convert the best of the chances created by the side, although Newton must have been frustrated at not being able to convert any of the host of chances that fell his way in the first-half.

Collins was certainly the shining light for County from that first-half, causing havoc on both wings, although the clinicality shown in previous games couldn’t quite be replicated by the Exiles when the chances came, Amond chipping over the crossbar with the best of them.

The away side continued their bright start upon the restart and had it not been for a stunning save from Day then they may have doubled their advantage within 25 seconds.

The chance again fell the way of an omnipresent Newton, this one a volley from 30 yards, although the County shot stopper read the scenario well to tip the shot over the crossbar.

Flynn elected to revert back to the familiar 3-5-2 system on the hour after the Exiles struggled to assert any foothold onto proceedings, that change in system coming as Josh Sheehan came on to replace Collins.

But it was the away side to again come closest before the game elapsed 70 minutes, Ben White this time required to clear an attempt off the goal-line from Revell.

The pace continued to be set by Stevenage as the game approached the final ten minutes, Newton again crafting the opportunity after a good run in-behind, although it again went over the crossbar.

That chance sparked Flynn into action by bringing on another attacker to try and salvage the result, this time Marlon Jackson taking to the field in-place of Ben Tozer.

The indication of five minutes added time at the end of the game gave County even more license to try and get an equaliser – but if anything, the away side continued to look the side most likely to get another goal.

White was again required to clear the danger after Stevenage substitute Matt Godden squirmed a shot towards goal – a chance that turned out to be the final of any note in the game.

That means County’s winless run against the Hertfordshire outfit since December 2014 continues, while the away side closed to within three points of the Exiles following their victory at Rodney Parade.

STEVENAGE FC| Join us for our Family Fun Day!