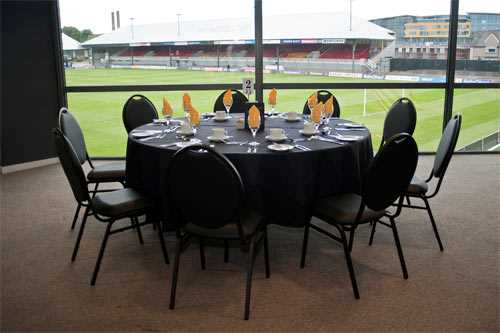 
Enjoy a delicious Sunday Lunch before you watch the game, by purchasing a Hospitality Package for our Emirates FA Cup Tie with Cambridge United. 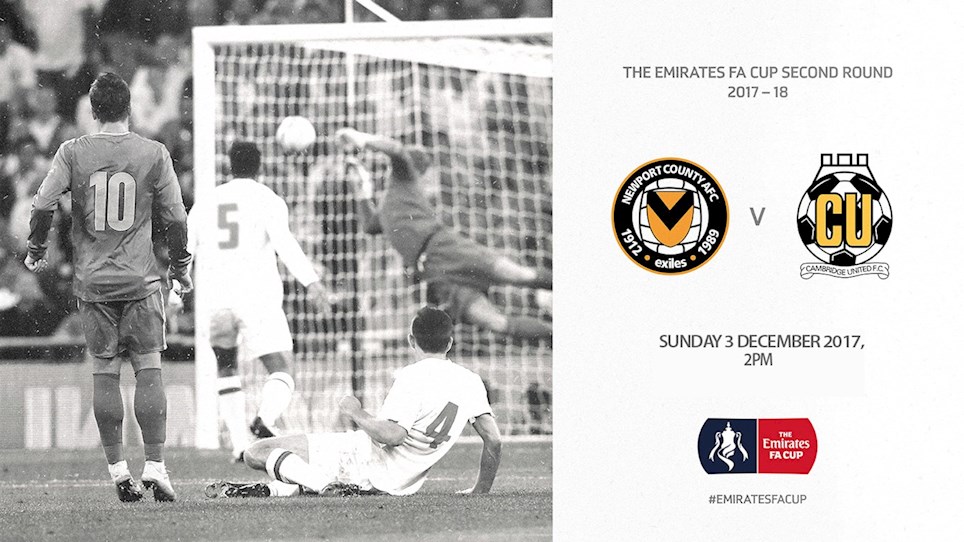 
Following County’s impressive victory over League One Walsall FC on 4th November, the Exiles have reached the Emirates FA Cup Second Round and will face fellow League Two side Cambridge United at...

A double from Joss Labadie ensured Newport County AFC booked their place in the Third Round of the Emirates FA Cup following a 2-0 win over Cambridge United.

And it took less than two minutes for the County captain to get his first of the afternoon.

Labadie superbly reacted to a Matty Dolan free-kick within 93 seconds to beat the offside trap and calmly side foot an attempt into the top corner.

He had to wait until eight minutes from time to get his second at Rodney Parade and what a goal it was to secure the Exiles place in the next round of the cup.

After Amond had freed Nouble down the right, the frontman perfectly picked out his captain to fire a volley straight into the bottom corner to seal a superb County win.

Victory means County will be in the hat for the Third-Round draw tomorrow which you can see live on BBC2 from 7pm.

Mike Flynn elected to name just the one change to his starting team that beat Swindon Town 1-0 at the County Ground eight days ago.

That change was enforced for County as Scot Bennett missed out through a problem with his hip adductor.

However, Mark O’Brien recovered from his own injury problems to start in Bennett’s absence, while Robbie Willmott was able to return from concussion and make the Exiles bench.

Cambridge manager Shaun Derry made two changes to his side that started the 1-0 win over Stevenage last weekend. Both of those came in the midfield as the visitors stuck to their 4-4-2 formation at Rodney Parade.

Paul Lewis and Piero Mingoia dropped to the bench to be replaced by Liam O’Neil, who recovered from his own concussion worries, and Jevani Brown also came in.

And such was the fast start at Rodney Parade that some fans wouldn’t have been in the ground to see the Exiles take the lead.

Just 93 seconds had elapsed when Matty Dolan swung an inviting delivery into the area for his captain Joss Labadie to finish as cool as you like from four yards with a side-foot into the top corner.

Such was the intensity in the opening 10 minutes that both sides created further big opportunities. O’Neil had the best chance for the visitors in the eighth minute but could only fire wide of Joe Day’s far post when found in space on the edge-of-the-area.

As perhaps expected after a frantic opening, the game did begin to die down as it approached the half-hour mark.

Two injury delays did help to disrupt the tempo somewhat in that 20-minute spell as both Tozer and Labadie required treatment, although both were fine to return to the field.

Frank Nouble was looking his menacing best for the Exiles in the opening proceedings while Mickey Demetriou was coping superbly well with the physical presence posed by Cambridge striker Uche Ikpeazu.

Due to those injury breaks, four additional minutes were indicated at the end of the first-half.

And County were mightily unlucky to not double their lead right at the beginning of the additional time. The ball fell kindly to Demetriou in the area and for all the world it looked like his volley was destined for the top corner, only for away captain Leon Legge to block it wide.

He didn’t really know too much about it as he put his head in the way of the effort and Demetriou again came close from the resulting corner.

At the other end, Jabo Ibehre came inches away from snatching an equaliser with just 10 seconds to go in the first-half. But again, Demetriou was the man to turn the ball away from his path to ensure County went in at the break ahead.

And it was probably a deserved lead too. The Exiles were causing the most danger throughout the first-half as Nouble was constantly causing a threat from all areas of the pitch.

Demetriou was just as important for County, winning numerous towering headers to thwart any Cambridge threat and was inches away from a goal for his troubles too.

Cambridge were possessing their greatest threat from the wings, Jake Carroll particularly the danger-man for the visitors, although Day and his alert defence were happy to deal with any aerial threat.

And the visitors were the side to create the opening chance of the second-half.

Harrison Dunk found some space in the area after beating the offside line, finding Ibehre with the cross, only for Ben White to again read the game so well and clear it off the line – the eighth time this season he’s prevented a goal.

White fired wide at the other end as County regained the ascendency by the hour mark, forcing Derry to make a double substitution to try to swing the game back in his sides favour.

Ade Azeez and David Amoo both came on to replace Ibehre and Dunk as the visitors switched to a more attacking 4-3-3 system.

Flynn retaliated with a substitution of his own, as Padraig Amond replaced Shawn McCoulsky up-front.

Labadie almost got his second of the afternoon with twenty minutes to go after a great cross from Dolan, only to see the looping header from 10 yards nestle on the top of the net.

It was almost written that Labadie would get another opportunity in the game following his scintillating display – and this one he duly took to double the advantage with just eight minutes to go.

Amond started the textbook County counter-attack with a superb pass into Nouble’s path. The frontman resisted the temptation to play it early to his captain, allowing him to perfectly position himself to volley home from 12 yards past a helpless David Forde.

Five minutes were indicated at the end of the game as Cambridge tried to force a way back into this cup tie.

But County held out in exemplary fashion to book their place in the next round of the Emirates FA Cup and will be ball number 47 in the draw tomorrow.

Next up for County: Carlisle United (9th December) HOME


Enjoy a delicious Sunday Lunch before you watch the game, by purchasing a Hospitality Package for our Emirates FA Cup Tie with Cambridge United.


Following County’s impressive victory over League One Walsall FC on 4th November, the Exiles have reached the Emirates FA Cup Second Round and will face fellow League Two side Cambridge United at...