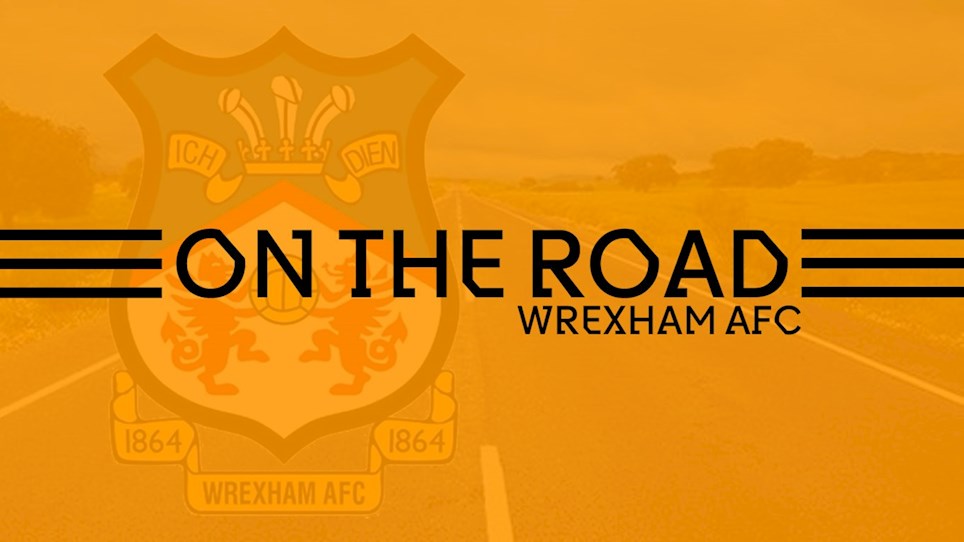 ON THE ROAD| Our Journey Continues to Wrexham


It’s Emirates FA Cup time again! Another away tie and another non-league Club, but Wrexham AFC present a very different challenge to the one mounted by Met Police FC.

Newport County AFC and Wrexham AFC will do battle again at Rodney Parade in 10 days’ time after a 0-0 draw in the Emirates FA Cup Second Round at the Racecourse.

In a game mostly controlled by the hosts, both goalkeepers came out of the game with the greatest praise, Joe Day in particular, his heroics in both halves ensuring County would at least have their name in Monday’s draw for the Third Round.

Mike Flynn decided to trust his starting side from Tuesday night that embodied both attacking genius and defensive resilience in the victory over Northampton Town.

The Exiles maintained the 3-4-1-2 structure that has worked ever so well when implemented this season, with the attacking line of Padraig Amond and Jamille Matt now boasting 20 goals between them.

Amidst off the field drama, Wrexham AFC were led out by assistant manager Graham Barrow at the Racecourse, who made three changes from their team in midweek.

James Jennings and Luke Young both dropped to the substitutes bench, with Mark Carrington and Paul Rutherford both returning.

Influential midfielder Rekeil Pyke missed out completely through a hamstring injury picked up at Barrow on Tuesday night, so Akil Wright also came back in as the hosts implemented a 4-3-3 formation.

With the game kicking off at an extremely late time for a Saturday night, some National League fixtures had been played before the game and therefore 24 places separated the two sides upon the referee’s first whistle.

But you wouldn’t have guessed it during the opening 45 minutes as although there wasn’t too much to note, Wrexham AFC mustered the main chances.

Neither side could even create a shot on target for nearly half an hour despite some intricate play in the midfield areas – Bobby Grant, Andrew Crofts and Brad Walker all trying to see if they could kick the ball out of the stadium.

The most menacing threat from either team in the inaugural stages was Wrexham AFC midfield talisman Paul Rutherford, as he looked like the only player capable of creating a goalscoring opportunity before half-time.

On 25 minutes, his twisting and turning run got him within the County penalty area, but he couldn’t pull it back for Stuart Beavon who was in a promising position, and Walker eventually smashed over.

County’s brightest moment came on 27 minutes and highlighted the sort of passing play implemented by the Exiles at times this season. Andrew Crofts found Dan Butler in a good area after County worked the ball to the captain with some neat interchange, but no player could get on the end of the low cross along the six-yard area.

Both sides continued to trade spells in possession until the main moment of note from the opening 45 minutes – and not for the first time, County had to rely on Joe Day to keep them level.

More promising work from Rutherford saw him squirm through David Pipe and Mickey Demetriou, playing a one-two with Stuart Beavon, before teeing up Grant who smashed at goal, but Day somehow got a strong hand to it.

Fraser Franks headed over at the start of the two additional minutes added time, but that was all for the action in a fairly good midfield battle in the opening half.

That was highlighted by the fact it was just the one shot on target, a great save by Day to thwart the Dragons, and the home side edged the possession statistics.

That pattern transcended into the second-half as well with County unable to get a foothold in the contest and Demetriou this time had to come to the rescue of the side on 53 minutes.

A long punt downfield by home goalkeeper Rob Lainton caught out the County defence with a looping bounce, Beavon advanced on goal and chipped Day but Demetriou had read the situation ready to hook off the goal line.

It felt like one of those matches where County would have to bide their time against a stubborn non-league outfit – that chance seemingly came on 58 minutes but Tyreeq Bakinson wastefully headed over when found unmarked by Dan Butler.

County started to gather some momentum from that point, Crofts and Sheehan both firing narrowly wide around the hour mark.

But Wrexham AFC still had the menacing threat of Rutherford cutting in from wide and when he found Grant in the area, most of the ground thought he’d scored but it actually hit the side-netting.

Once again, Day’s heroics then had to rescue the Exiles from a Wrexham AFC corner-kick. The delivery eventually found its way to Summerfield at the far post, but Day clawed the ball off the goal line.

Back went County and within the space of 60 seconds around the 80-minute mark, home captain Pearson blocked a Demetriou header wide for a corner then substitute Antoine Semenyo missed a glorious opportunity with a header.

The Exiles were getting closer and with their first shot on target after 84 minutes, Lainton made a smart save to deny Semenyo, who was certainly making a difference after his introduction.

Six minutes of additional time was added on at the end of the contest but neither side could find a winner – a replay required at Rodney Parade in 10 days’ time.

Next up for County: Cheltenham Town (4th December 2018) CheckaTrade Trophy - AWAY

ON THE ROAD| Our Journey Continues to Wrexham


It’s Emirates FA Cup time again! Another away tie and another non-league Club, but Wrexham AFC present a very different challenge to the one mounted by Met Police FC.

Please note, this match will be all ticket and supporters will not be able to purchase tickets on the day.

The Club has received an initial allocation of 780 unreserved seats in the Mold/University End of the Bkoncepts Stand.

Ambulant Disabled tickets are charged at the same price as printed above but supporters are entitled to a free carer ticket.

If you require a wheelchair bay for this game, please email ticketoffice@wrexhamfc.tv or call the Ticket Office option on 01978 89 1864.

Please note, the only wheelchair sections in the stadium are in the home stand opposite the away supporters.

Tickets will be on sale from midday, Monday 19th November at the Kingsway Club Shop for Season Ticket Holders, Trust Members and Volunteers only.

You will not be able to purchase tickets online during this period, but you can purchase over the phone by calling the Ticket Office on (01633) 415374

Tickets will go on General Sale at 5pm, Tuesday 20th November 2018 online and will be available to purchase in the Kingsway Club Shop from 9.30am, Wednesday 21st November.