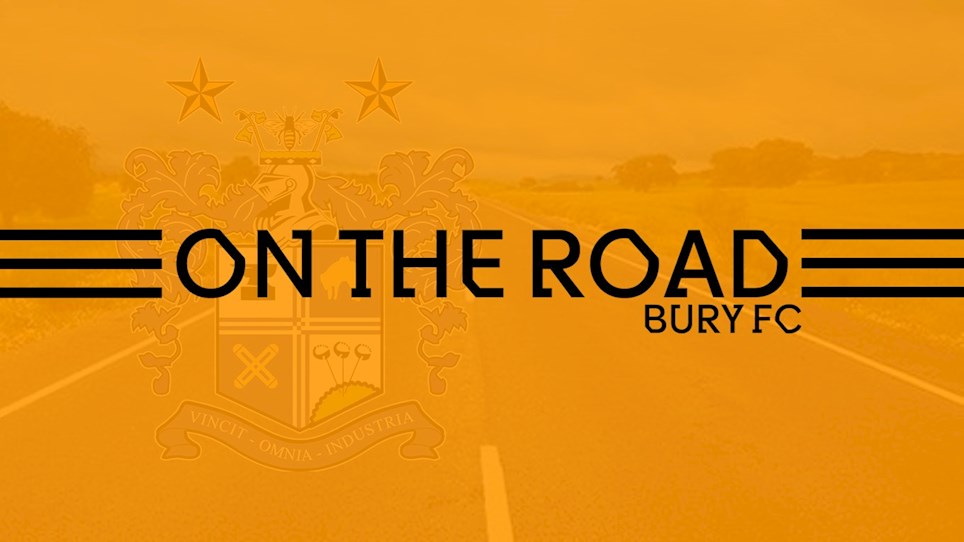 ON THE ROAD| Our Journey Continues to Bury


Tomorrow night, we hit the road again as we travel North to Lancashire to face Bury FC in the League. 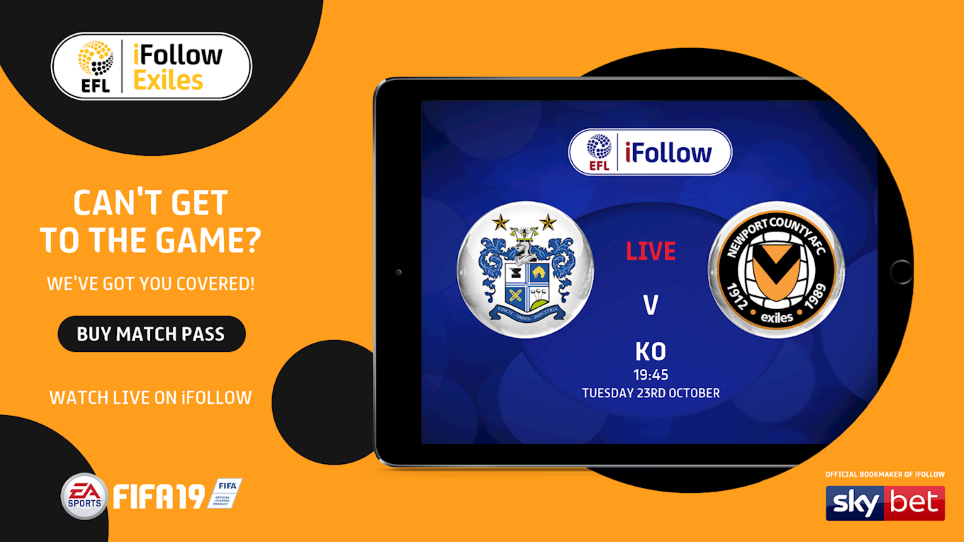 iFOLLOW| Can’t join us at Bury FC? You can watch the action live for just £10 with iFollowExiles

Newport County AFC remain fourth in the League Two table after battling to a 1-1 draw with Bury FC away at the Energy Checks Stadium at Gigg Lane.

Jamille Matt’s purple patch continued as he levelled midway through the second-half with an instinctive goal from two yards, cancelling out Nicky Maynard’s stunning individual opener for the hosts.

MK Dons were the only side above the Exiles to pick up all three points so the gap to the automatic promotion places stays at just a point, while no sides directly below County won either so the gap on fifth and below increased to three points.

Mike Flynn elected to make three changes to the side that suffered a first League Two away defeat since the opening day of the season on Saturday against Crawley Town.

Having been dismissed for an overzealous challenge late on in West Sussex, Fraser Franks started his three-match suspension and was replaced by the returning Tyler Forbes.

The second alteration brought about a formation change for the Exiles as Mark O’Brien came in for Josh Sheehan, meaning the Exiles went for a 3-4-1-2 formation from the first whistle.

With the formation change, County had to lose a striker to make up for the inclusion of another defender and Antoine Semenyo fell to the bench as Robbie Willmott was included.

That saw former Premier League and Cardiff City striker Nicky Maynard line-up against the Exiles up-front, while midfielder Danny Mayor made his 300th appearance for the Shakers.

It was certainly an enterprising contest by both sides in the first-half but Bury FC had the majority of the play if any and had a slender lead at half-time.

The Shakers had 63% of the first-half possession but didn’t really do much with it, happy to play a patient style of football when going through several phases in and around the area but they constantly found the County defensive unit in their way.

It was always going to take something of pure magic to break the deadlock in Greater Manchester and it was the Premier League class of Maynard that got it after 24 minutes of action.

All the play from the Shakers was coming through their architect Danny Mayor and when the midfielder found his striker on the centre-circle, Maynard spun Mickey Demetriou inside and out before bursting through and curling a stunning shot past Joe Day from the edge-of-the-area.

On that notable appearance milestone, Mayor was certainly playing with exuberant confidence and he was only denied a celebratory goal by a clever reading of the situation by David Pipe to divert the looming threat from a Callum McFadzean delivery.

Shakers striker Dominic Telford also saw a shot blocked over the bar after half an hour but that was all the home side could muster in terms of chances despite having the lion’s share of possession.

County’s greatest attacking threat came in the early parts of the game, but Bury FC goalkeeper Joe Murphy remained relatively untested throughout the opening 45 minutes despite some inventive play on occasion.

Robbie Willmott saw a 35-yard free-kick narrowly avoid the near post within the opening five minutes, while some good interchange between Dan Butler and Tyler Forbes eventually saw the right-back denied by a flying covering challenge by Will Aimson.

Just like on the weekend, County again started the second-half in a completely different vein to the first – and in a startling turn of events, Jamille Matt again got the equaliser in virtually the same minute as three days ago.

This time it came on 56 minutes and was a really instinctive finish for Matt’s ninth of the season, the striker refusing to believe any Bury FC defender would clear an Antoine Semenyo delivery into the area, peeling to the far post to tap home from a mere two yards.

It was nothing more than County deserved for an engaging start after the restart, Maynard did see a shot drag wide for the home side but everything else up until the hour was coming from the Exiles.

There was still the commanding of presence of Mayor to deal with, however, and Day had to make an unbelievable point-blank save to deny Maynard after yet another splitting past from the midfielder.

Will Aimson had to time his tackle to perfection to thwart Semenyo’s marauding run as the game really started to open up, County looking a completely different entity after the restart and following the Bristol City loanee’s introduction.

Mayor’s majestic feet were in full-flow again with 13 minutes to go, dancing his way through several challenges and looked destined to score, but Day again came to County’s rescue to get a hand to his attempt.

The County shot stopper also had to get down to his near post efficiently shortly after to deny Mayor’s cross-shot creeping into the far post, as the 28-year old probably thought it wasn’t his night despite being the standout performer for Bury FC.

As the game ticked closer to its conclusion, the home side started to control things and it was really backs to the wall stuff for the Exiles.

On 84 minutes, Maynard probably should have doubled his and his sides tally when hitting the side netting with the goal at his mercy, but Day has to take enormous credit for forcing the attacker wide of goal and not bringing him down within the area.

Five minutes additional time were indicated at the end of the contest but neither side could find a winner – County battling hard to get a deserved point in Greater Manchester.

ON THE ROAD| Our Journey Continues to Bury


Tomorrow night, we hit the road again as we travel North to Lancashire to face Bury FC in the League.

iFOLLOW| Can’t join us at Bury FC? You can watch the action live for just £10 with iFollowExiles

Bury FC do not send a ticket allocation out to a visiting Club. County supporters who wish to purchase in advance for our upcoming League Match vs Bury on the 23rd October 2018 can purchase directly from the Bury's Ticket Office.

Please note that online, advanced ticket purchases will incur a booking fee whilst there is no booking fee when purchasing on the day.

Tickets are charged at the same rate both on the day and in advance, however, online purchases incur a booking fee of between £0.92 and £1.91 per ticket.

* Disabled supporters must purchase tickets on the day at the Ticket Office – please see below for details.

You can purchase tickets online in-advance for this match from Bury FC directly.  There is an online booking fee which is charged at between £0.92 and £1.91 and is charged per ticket.

The cheapest way to purchase tickets for this match, please use cash at the turnstiles on the day.

Bury FC offer a Family Ticket for £20.  This comprises of one Adult ticket and one 5-16 ticket.  Any additional 5-16 ticket purchased on top is charged at £5 per ticket.  Family Tickets cannot be purchased online but can be purchased in advance by contacting Bury FC directly via telephone (0161 764 4881 - option 1) or via email (tickets@buryfc.co.uk)

Tickets will be available to Newport County AFC supporters on the day at Gigg Lane.  It is recommended that anyone travelling purchases in person at the turnstiles – this will be cash only.

Disabled Supporters are required to purchase tickets on the day at the Bury FC Ticket Office.  Bury have asked that supporters bring necessary proof.  Disabled supporters can purchase a ticket at the concession rate (£14) and are entitled to a free carer ticket. 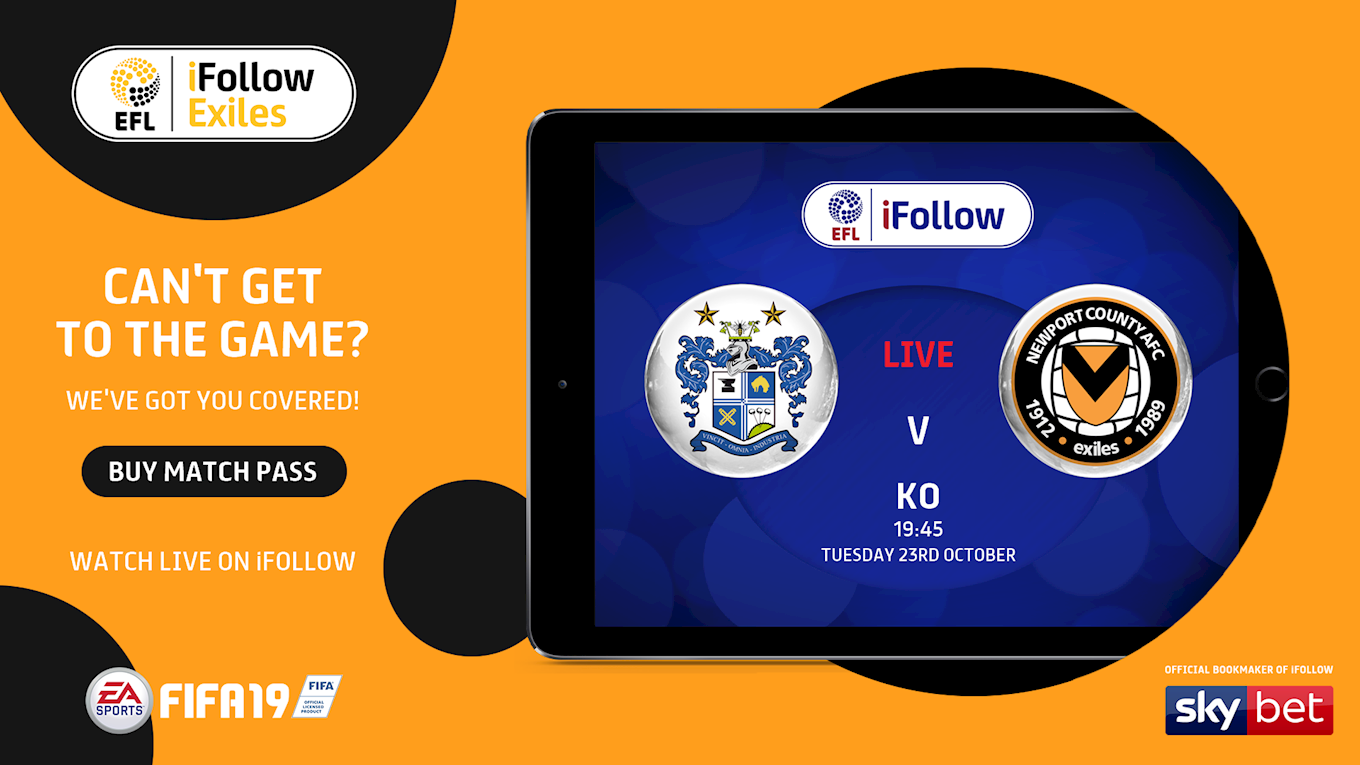 Our match vs Bury FC will be available to watch live on iFollow Exiles for just £10 with the majority of the fee going straight back to Newport County AFC.

You do not need to be an iFollow Exiles subscriber to purchase this one-off match pass.  For £10, you will be given access to Newport County AFC match commentary by Tim Thraves and single camera coverage of the game.