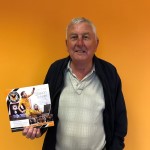 The club offered Derek (pictured left) the ticket free of charge as a way of celebrating this brilliant milestone.

It’s the first time the Club has hit four figure Season Ticket Sales since returning to the EFL and hopefully shows that the momentum built at the end of last season is set to continue.

With many of last season’s heroes choosing to stay at the Club and the manager making some great new signings to bolster the attacking line, 2017/18 is going to be an exciting Season for The Exiles.

Chairman Gavin Foxall said: “I’m delighted we’ve reached such a milestone on the day our players have returned for pre-season.  Our thanks to all the fans that have bought a season ticket.  Your continued support is much appreciated!”

Manager Michael Flynn said: "What an amazing achievement by the fans.  They really are the core of the Club and I look forward to repaying them with good performances on the pitch."

The Club wants to say a massive thank everyone who has purchased a season ticket so far and don't forget - there's still time to get yours and ensure you don't miss a moment of next season.