Newport County AFC will be looking to use confidence from progressing in the Leasing.Com Trophy last week to advance in the Emirates FA Cup on Tuesday night when they host Grimsby Town in a First-Round replay. The winners know they will head to eighth tier Maldon & Tiptree in the next round, another game scheduled for TV, so a fair amount of prize money will be up for grabs at Rodney Parade.

Here, you can find all the facts and statistics ahead of this Emirates FA Cup First Round Replay…

Grimsby Town have only made the Third Round of the competition on one occasion in the past five seasons, but they did get a Premier League Side when falling to a late defeat at Crystal Palace on January 5th 2019.

The Mariners best success in this competition came pre-Second World War as they reached the semi-finals on two occasions in 1935/36 then again in 1938/39. Grimsby were in the top tier of English football both times they reached the last four.

Ultimately, Grimsby failed to reach the final as they lost 1-0 to eventual winners Arsenal on March 21st 1936 before a rather comprehensive 5-0 defeat against Wolverhampton Wanderers on March 25th 1939. 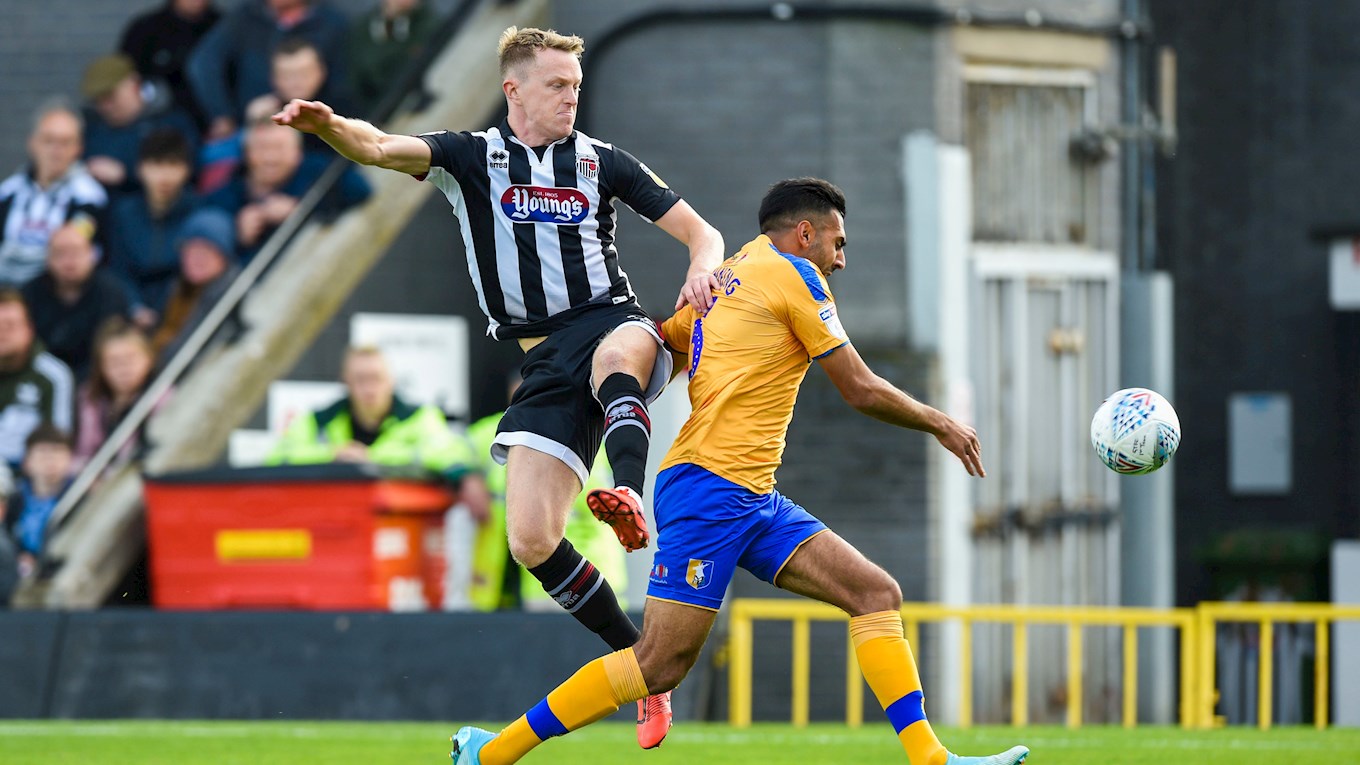 With Grimsby Town not playing since the first tie in Lincolnshire, it is likely they will field a full-strength squad having only played three competitive fixtures in the last month.

In terms of injury news, Grimsby are likely to be without midfielder Max Wright and defender Luke Hendrie. Wright is expected to return to full training soon, but this game will come too early, while Hendrie is nursing a hamstring injury and will also be unavailable.

One to Watch – Ethan Robson

Grimsby Town have had some excellent loan signings from Sunderland in recent seasons and midfielder Ethan Robson is no different and impressed in the first tie against the Exiles with a confident display.

He arguably should have added to his tally of three goals at Blundell Park when he tried a shot from 20 yards in stoppage time, but Tom King was happy to see it sail over his crossbar and into the stand.

Used sparingly by Sunderland in recent seasons, the 23-year old has also spent time on loan at Dundee and will remain with the Mariners until at least the January transfer window. 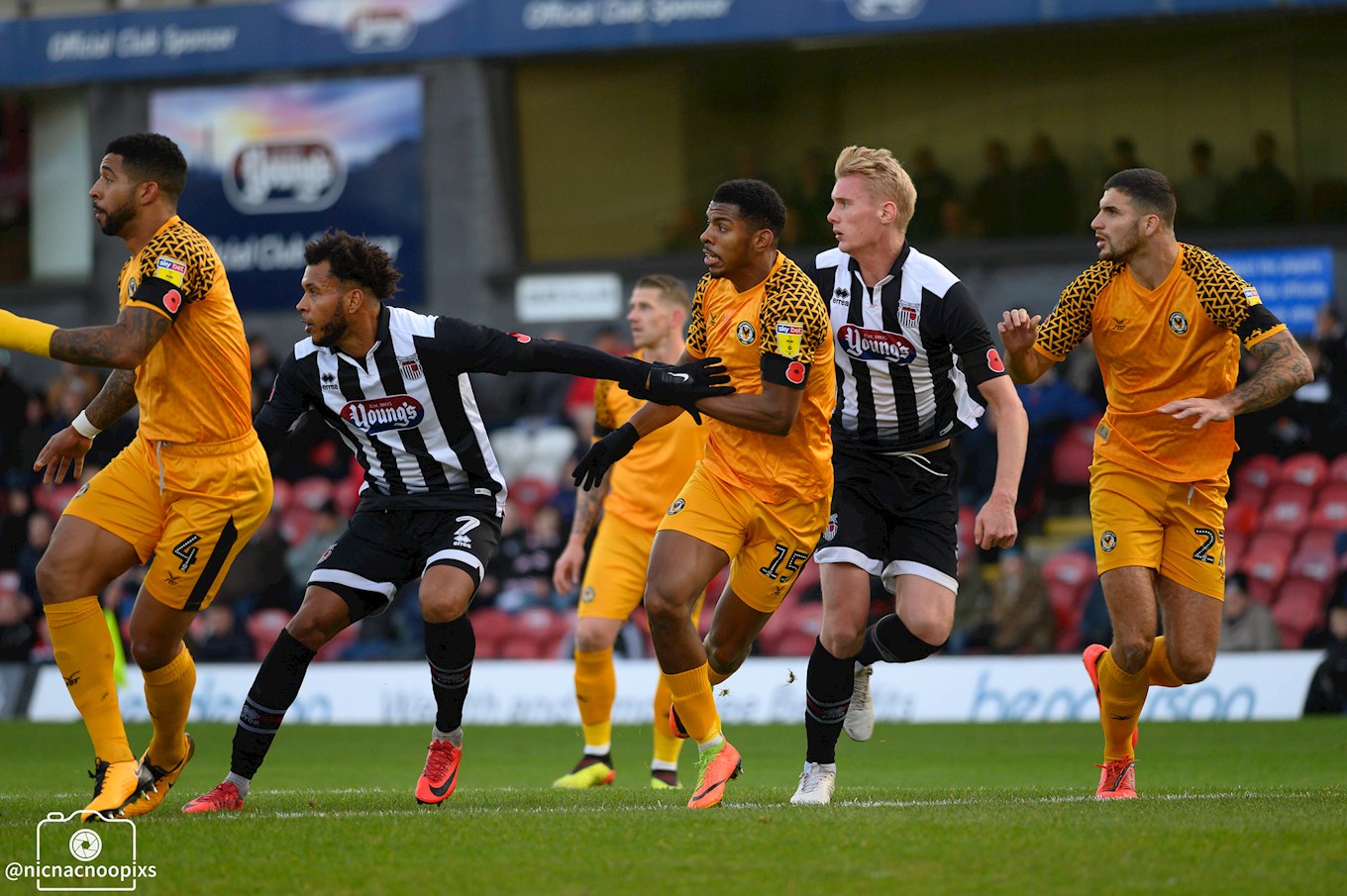 Nothing could separate League Two rivals Newport County AFC and Grimsby Town as the two sides played out a 1-1 draw at Blundell Park in the Emirates FA Cup First Round.

Despite a positive start from County, Grimsby were the side to open the scoring three minutes before the break. Luke Waterfall was given far too much space in the area to power a header under Tom King and the Mariners were in-front.

Not for the first time Michael Flynn’s second half alterations made the difference as County wrestled back the ascendency, Padraig Amond hit the post and crossbar before finally scoring for the seventh successive Emirates FA Cup round via a penalty ten minutes from time.

Darren Handley is currently embarking on his fifth full season as a Football League referee having taken charge of his first League Two fixture midway through the 2013/14 campaign when York City and Cheltenham Town drew 0-0 at Bootham Crescent.

He has refereed 15 matches thus far this campaign, brandishing 60 yellow cards and five red cards, last taking charge of a fixture on Saturday as Rotherham United edged past Accrington Stanley in League One.

For an unknown reason, Handley didn’t officiate a single fixture last season, so his last full campaign came in 2017/18. His statistics read as 130 yellows and eight reds from 42 matches. 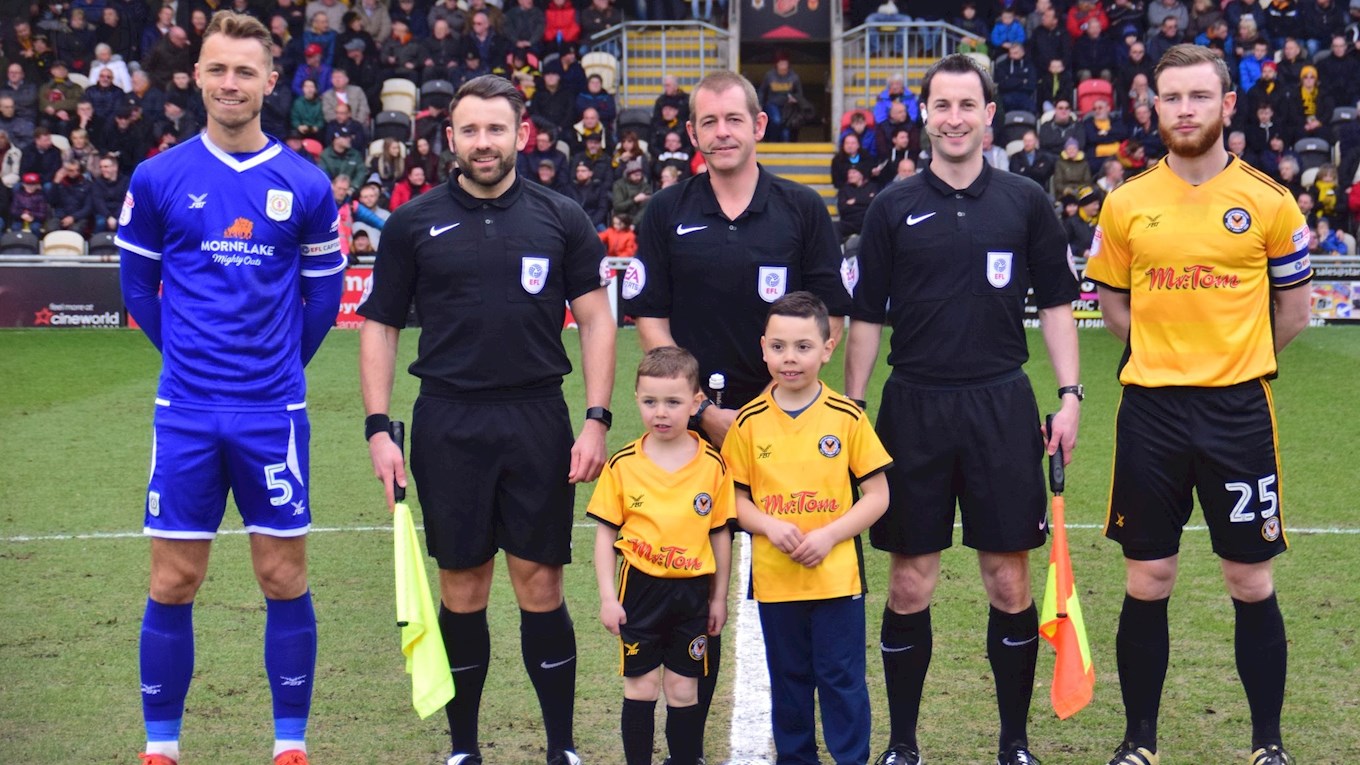 Handley has refereed a match involving Newport County AFC on nine previous occasions in the Conference Premier and League Two. The Exiles don’t exactly have the best records from these previous matches, having won just twice, drawn on a further three occasions and lost the remaining four encounters.

He has already taken charge of a County fixture this season as they drew 0-0 at Walsall on August 20th. Four Exiles players were booked among six yellows in total – Kyle Howkins, Ryan Haynes, Josh Sheehan and Tristan Abrahams the offenders.

Handley also took charge of another County fixture as Crewe Alexandra secured a 2-1 victory at Rodney Parade on 24th March 2018. No County players were booked.

In 2015/16, County suffered a further two defeats in matches officiated by Handley. Kevin Feely and Aaron Hayden were booked in a 3-0 defeat at Cambridge United on the opening day of that campaign, with Oli McBurnie and Matt Partridge booked on December 12th 2015 in a 4-3 defeat at Notts County.

The only other time Handley has refereed County in the Football League came on September 20th 2014 in a 0-0 draw at Shrewsbury Town. Ryan Jackson and Andy Sandell had yellows brandished in their direction, while Andrew Hughes saw red.

Other Emirates FA Cup replays that night (All 7:45pm kick-offs)

As the game is a cup match, no live showing of this fixture will occur on iFollow Exiles, but the game will be live on BBC Two Wales from 19:30pm.