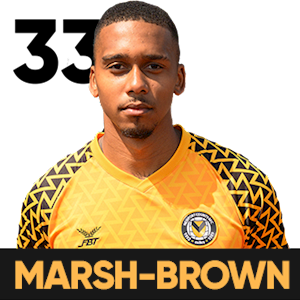 Having been all around England in the last 8 years, it’s safe to say that this English born winger has garnered himself plenty of experience as a scoring force for whatever club he makes his home at. Beginning his football journey in 2009/10 with Fulham under 18s, where he scored 2 goals in 15 appearances for the side. After making a move the next season to MK Dons, he made 19 appearances and scored another 2 goals for this club. In the 2011/12 season, he then signed for Oldham United where he made 12 appearances for the club, picking himself up 1 goal for the Latics. The following season, Marsh-Brown made a move to Barnet where he picked up 1 goal in 5 appearances and then moved again to Yeovil Town where he made 27 showings for the side and bagging himself 2 more goals.

It was during the 13/14 season at Barnet FC where Keanu really started to find his footing and while playing for the conference side, he managed to score 11 goals and 11 assists in 39 games for the team. During the 15/16 season, Forest Green Rovers manager Ady Pennock finally managed to sign Keanu, after failing to do so a year prior, on a 2-year-deal with the option of a third. Keanu then enjoyed his next three years at the club, making 109 match appearances and scoring 27 goals.

Keanu Marsh-Brown has also made 16 appearances for the English International C team, with a possible call up in the future for this young winger.