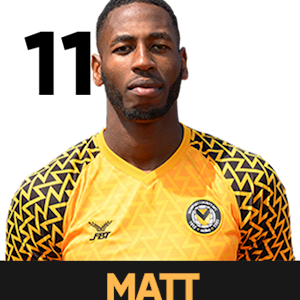 Starting his career off at Kidderminster Harriers and scoring 18 goals in 40 appearances over the course of 2 years even though he had issues with a work visa during this time.

Matt then had two short loan spells in the 15/16 season in which he signed a 2-month loan deal to Stevenage where he got 1 goal in 8 games. He was then sent on another loan to Plymouth Argyle where he played 14 games and scored 7 goals. Jamille went on to sign for Blackpool in the summer of 2016 where he scored his first FA cup goal against previous team, Kidderminster Harriers. However, after tearing his hamstring in a 1-0 victory over Doncaster, he had to take the rest of the 2016/17 season off.

Although he did get to see his team get promoted up to League One at the end of the season. When he was healthy enough to return, he was loaned out to Grimsby town, having scored 5 goals in 39 games for Blackpool. While at Grimsby, he managed to secure himself a total of 4 goals in 36 matches before signing with County for the start of the 18/19 season.

Jamille Matt once earned the Conference Premier Player of the Month Award in December 2012.