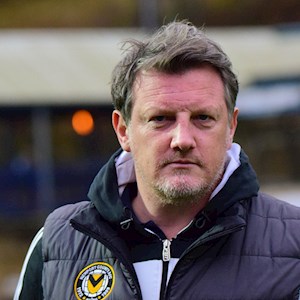 Wayne Hatswell's first involvement with Newport County AFC was in 2010 when he joined the Club in a player-coach role. He was a part of side that reached the FA Trophy Final at Wembley in 2012 but left the club at the season.

In the following Season, he retired from football and took on the role of manager at Northern Premier League Division One South side Stamford.  In his first year, he won the side promotion via the playoffs.

He returned to Newport County AFC the following season to work under then Manager Justin Edinburgh in County's first Season back in the Football League.

Hatswell remained at the Club until April 2015 having worked with both Edinburgh and Jimmy Dack.  When Dack left in 2015, Hatwell was released following the appointment of Terry Butcher as manager.

On 6 July 2015, Hatswell joined Justin Edinburgh at Gillingham this time as the Club's Youth Team Manager.  He remained there for two years before returning to County in March 2017 to assist Michael Flynn as he took over as caretaker manager.

After helping to mastermind The Great Escape, Hatswell and Flynn were taking on permenantly by the Club.