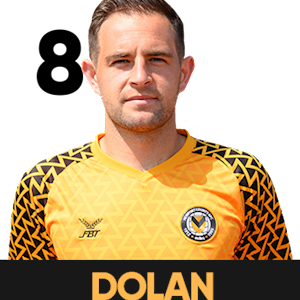 Matty Dolan was one of the Exiles' first signings of the window and joined County following a very successful season at Yeovil Town FC where he was voted the Club's Player of the Season.

Michael Flynn called Matty Dolan his "top target' when the creative midfielder signed for the club and has been a revelation in the County midfield since arriving from Yeovil Town in the summer.

Born in Hartlepool, Matty began his career with Middlesborough and after several loan spells he signed permanantly for Bradford City before moving to Yeovil Town on a permanant basis. 77 appearences and seven goals later, Michael Flynn recruited Matty to be a regular in the midfield at Rodney Parade.

The Gaffer said he had been keeping track of Dolan for several seasons so it is understandable that the versatile midfielder rejected a proposed deal from the Glovers and instead moved to South Wales.

DID YOU KNOW? Matty appeared as a second-half substitute in the 2013 League One play-off Final as Yeovil beat Brentford 2–1 to secure promotion to the Football League Championship.