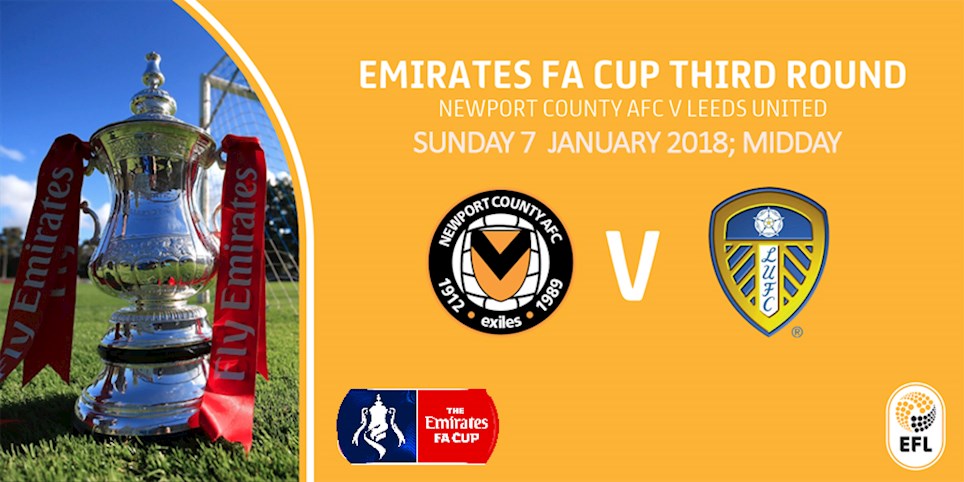 EMIRATES FA CUP| Match details for the Exiles Third Round Cup tie vs Leeds United have been announced.

A stunning stoppage time winner from Shawn McCoulsky ensured Newport County AFC made it through to the Fourth Round of the Emirates FA Cup for the first time since 1979 with a 2-1 win over Championship outfit Leeds United.

Leeds were team to take a lead into half-time, captain for the day Gaetano Berardi netting his first of the season for the Whites in just the 9th minute.

It was a strike worthy of opening the score in an enthralling contest at South Wales, the centre-half firing through a host of bodies and into the bottom corner with a strike of sheer pace and power from 30 yards.

The Exiles fought valiantly to try to bridge the 53-place gap in the English league pyramid and found their deserved equaliser with 13 minutes to play.

Some real intricate play in the middle from County eventually found its way out wide to Nouble, who fired a dangerous looking cross into the area which forced Conor Shaughnessy into conceding an own goal.

And just as it looked like a replay at Elland Road would be required, the Exiles struck a dramatic winner at the start of three additional minutes through McCoulsky's 11th goal of the season.

The substitute striker rose highest from Matty Dolan's corner to head past a helpless Andy Lonergan in the away goal from six yards and secure the Exiles a historic victory and a place in tomorrow’s draw.

Mike Flynn elected to name an unchanged side from the team that beat Exeter City 2-1 on Monday.

That saw the Exiles stick to their 4-4-2 formation from the off at Rodney Parade against Championship opposition, with Padraig Amond and Frank Nouble leading the line up-front for the Exiles.

New January signings Josh Sheehan and Tyler Reid were named on the bench after completing their first full week’s training with the side, while October addition Paul Hayes joined them as part of the substitutes for the first time this season after having his transfer certificate come through on Monday.

Leeds United manager Thomas Christiansen chose to rotate his squad for the game and made nine changes to the side that drew 0-0 with Nottingham Forest on Monday.

Only Gaetano Berardi who was made captain for the day and Kalvin Phillips kept their places, while Christiansen also named four 17-year olds in the matchday squad.

And it was one of those incoming Leeds players that almost gave the away side the dream start on their first ever trip to South Wales to face the Exiles.

A long ball found Jay-Roy Grot unmarked 10 yards out within the opening 15 seconds, but Joe Day remained composed after rushing off his line and made a comfortable save.

But it wouldn’t take the Whites too much longer to open the scoring in South Wales as Berardi scored his first goal of the season in the 9th minute.

It was some way to open the scoring at Rodney Parade too, the away captain firing through a host of bodies from 30 yards to outfox Day with the sheer pace and power of the attempt as it went into the bottom left corner.

That goal seemed to spark something into the County side as they searched for an instant reply and they almost found one with their first shot on target on the quarter-of-an-hour.

Nouble’s head-down from Matty Dolan’s corner fell the way of Amond just five yards out, but with the keeper beaten, Man Utd loanee Cameron Borthwick-Jackson read the situation smartly and hooked it off the goal line.

The ascendency was certainly shifting after a lively Leeds start, Joss Labadie forcing a smart save from Andy Lonergan in the away goal as the clock ticked past the twenty-minute mark with a clever headed attempt.

Smart tracking back from Mateusz Klich denied the County captain again shortly after as the Leeds defence were facing somewhat of an aerial bombardment from the Exiles, the centre-back diverting the shot narrowly over the crossbar.

Despite the indication of one-minute additional time at the end of the first half, no further chances could be created by either side as Leeds took a slender lead back with them to the dressing rooms.

The Exiles certainly weren’t fearing the 53-place difference in the league standings, however, and were more than a match for their Championship counterparts in the opening 45 minutes.

In fact, County were perhaps unlucky to have not found the net themselves, creating a host of chances, only to find a stubborn Leeds defence and goalkeeper in their way.

The away side were also creating their fair share of chances at a packed Rodney Parade, and got their goal when they probably warranted it most after a sustained spell of pressure in the opening exchanges.

Both sides made a lively start to the second-half too, each creating a chance before the 50th minute, although the two attempts from Bennett and Grot were put wide of the far post.

Amond’s acrobatic overhead kick found the side netting as County continued to defy the difference in divisions and pressurise the away side in search of a priceless equaliser.

Such was County’s dominance at that part of the game, Christiansen elected to bring on club captain Liam Cooper to try and shore things up at the back, Borthwick-Jackson making way.

And the centre-half was directly involved in the action by making a last-ditch tackle on Nouble in the area while also recovering well to clear the danger.

Lasogga forced Day into a reflex save with 25 minutes remaining, while Labadie blazed high and wide of the crossbar for the Exiles.

As the clock ticked into the final 20 minutes, that gave Flynn the license to try something different and find that precious equaliser.

Shawn McCoulsky replaced Dolan as County switched to a 4-3-3 system at Rodney Parade, firing over the crossbar within a minute of coming on.

Samu Saiz became the second Leeds substitution to take to the field as Christiansen looked to shore it up again, but could do nothing to prevent County from getting the equaliser in the 77th minute.

Some intricate play from County eventually found Nouble out-wide, whose cross looked destined for Amond in the centre, with Conor Shaughnessy inadvertently directing the ball into his own net.

Nouble almost turned the game completely on its head within 30 seconds of that equaliser, but could only head high of the crossbar when found unmarked eight yards out.

Paul Hayes came on with five minutes remaining to make his first appearance in a County shirt, and almost made the perfect start to his Exiles career within 20 seconds of replacing Amond, only to see his looping effort go just wide of the far post from all of 45 yards.

But right at the start of the three added extras at the end of the game, McCoulsky struck a priceless winner for the Exiles.

Dolan’s corner was inch perfect for the substitute to net his 11th goal of the season, arguably the most important of all, to secure a sensational win for the Exiles.

To end a dramatic game at Rodney Parade, Saiz was dismissed for the Whites for persistent protests after the County goal.

And the Exiles held out superbly against the ten men to add another piece of folklore to the County history books, ending a 39-year wait for a Emirates FA Cup Fourth Round tie.

Next up for County: Grimsby Town (13th January) AWAY

EMIRATES FA CUP| Match details for the Exiles Third Round Cup tie vs Leeds United have been announced.

We have sold over 6,500 tickets for our Emirates FA Cup Third Match vs Leeds United! With just a few days left to buy let's do everything we can to make this fixture a sell out!

Tickets are not available online or over the phone.  Please come to the ticket office during opening hours to purchase tickets.

Please note that Ticket Sales for this match will end 7pm on Friday due to safety reasons.  This match is all ticket.

Ticket prices have been set in conjunction with Leeds United and are reflective of the tie, and additional resourcing and police costs which are associated to the match.

All hospitality tickets will be available to collect on Thursday 4th January.  If you have any questions about your Hospitality Booking, please contact commercial@newport-county.co.uk

This match is an all ticket game.  You will not be able to purchase tickets for the match after 7pm on Friday 5th January.  We recommend that supporters do not travel to the ground without a ticket. 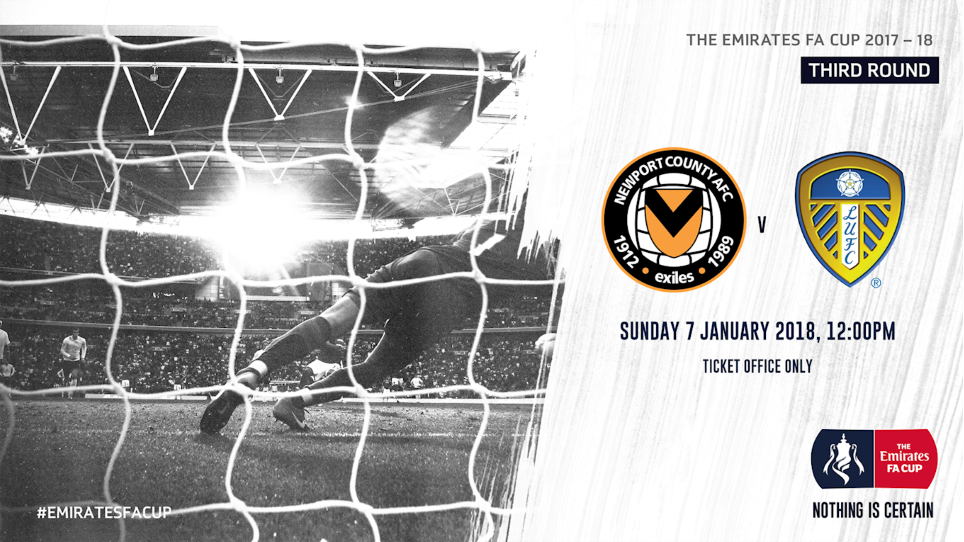 
It's been a fantastic first week of sales for our Emirates FA Cup Third Round fixture vs Leeds United with 5,288 tickets (which includes the 1,030 away allocation) already snapped up. 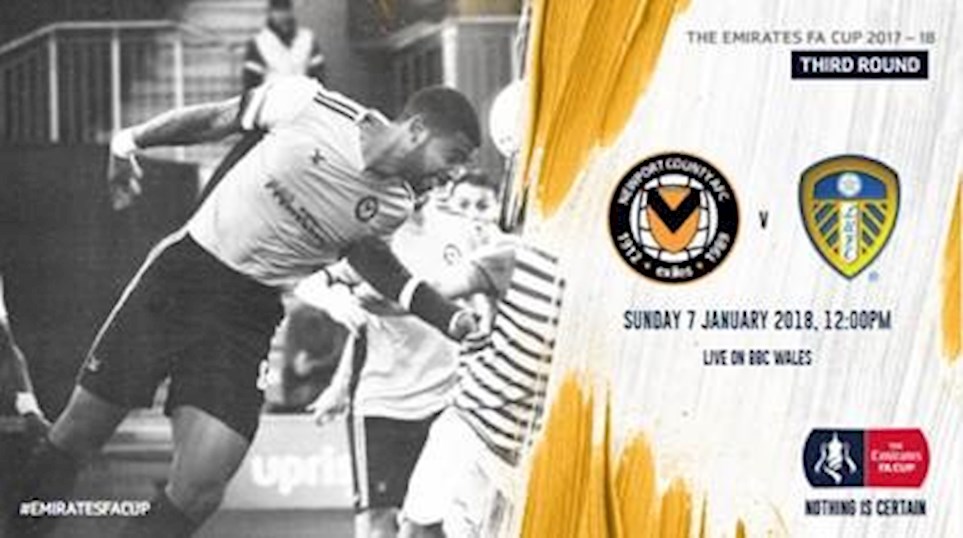 EMIRATES FA CUP| Ticket details, prices and information for Third Round Clash with Leeds United have been released


Following yesterday’s announcement that the Club's Third Round Emirates FA Cup home tie against Leeds United will be shown on BBC Wales at 12pm on Sunday 7th January 2018, the Club is pleased to...