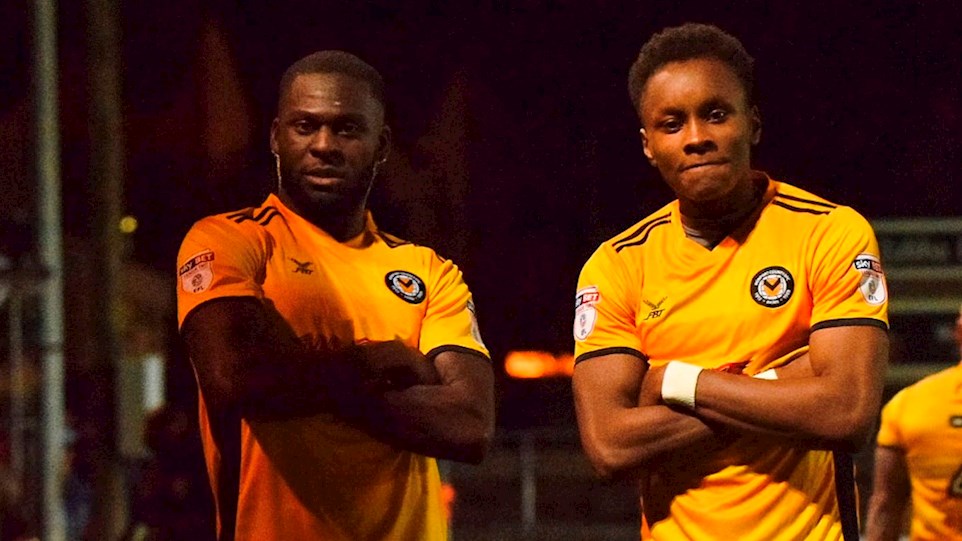 SNEEK PEEK| Take a look at what's in this evening's programme.


It's another fact-filled and story-packed edition of the Newport County AFC matchday programme. Junior section, a word from the manager, an exclusive interview, and a look back at some key moments...

A first professional goal from Ben White wasn’t enough to prevent Newport County AFC from suffering defeat at Rodney Parade, after a 2-1 loss to Barnet.

In another game hampered by the wet and windy conditions in South Wales, neither side created many opportunities of note in the first-half, although it was a perfect night for White on a personal level, who magnificently denied Dan Sweeney with a header off the goal-line midway through the half.

And just as the second-half seemed to be transpiring into another slow half of football, White got his first goal for the club in the 72nd minute.

It came after a fizzing cross from Padraig Amond caused away goalkeeper and ex-Exile Jamie Stephens some problems under the testing conditions, with Stephens only able to palm the ball as far as White on the edge-of-the-area, who guided the ball into the empty net with a fine header.

But the visitors battled hard after falling behind and with two swift passing moves in the final three minutes, turned the game on its head.

It was two identical goals for the Bees, both coming after quick counter-attacking moves. Twice, substitute Jamal Campbell-Ryce put in inch-perfect crosses into the area, with John Akinde netting the equaliser on 88 minutes with a header into the far corner.

Then in the first additional minute of the six minutes added time, Shaquile Coulthirst completed the turnaround to gift Barnet their first win in 15 games in all competitions, while County dropped to 10th after going six without a win in League 2.

Mike Flynn elected to make just the one change to the side that started the 1-1 draw at Accrington Stanley on Saturday.

That saw Matty Dolan return from his one-match suspension after receiving five yellow cards, coming in for Dan Butler.

That meant Scot Bennett dropped back into the defence while Dolan took up his familiar spot in the midfield of a 4-4-2 formation. Joss Labadie made a welcome return to the bench.

Barnet manager Mark McGhee went with a 3-5-2 system after making three changes to his side that lost 1-0 at Port Vale in his first game in charge of the club.

Captain Michael Nelson, Mauro Vilhete and ex-Exile David Tutonda all returned to the Bees starting side as McGhee went in search of finding his best team.

Such were the wet and windy conditions at a sodden Rodney Parade, that it took until the 11th minute for either side to fashion an opportunity.

Joe Day was forced tip over a 30-yard free-kick from Ryan Watson on that occasion, while Coulthirst flashed a header into the side netting from the resulting corner.

It didn’t take too much longer for the Exiles to make their opening opportunity of the night and they came within an inch of taking the lead on 16 minutes.

Bennett fired a shot that originally looked like drifting out, only for Ricardo Santos to inadvertently divert it on it’s path as it flew past a helpless Jamie Stephens, who would have been mightily relived to see it bounce back off his far post.

It was certainly an end-to-end contest in the opening half-hour, even if the weather was having a say in the amount of clear-cut chances created in the opening proceedings.

That’s why a routine save by Stephens to deny Nouble from close range looked all the more impressive, even if it would normally look easy to hold the ball at the first attempt.

Day had to make an identical save to the one by Stephens in the 33rd minute, and you would have to say that the conditions had somewhat deteriorated by the time the County goalkeeper made his save.

And with five minutes remaining of the first-half, the away side twice came close to getting the opener.

Akinde was found well in the area, forcing a fingertip save from Day to deny his header. But the rebound fell kindly to Dan Sweeney, who fired a shot that had Day beaten all ends up, only to see Ben White head it off the line – the 7th time the defender has done that already this campaign.

A nasty looking injury forced David Pipe off shortly after, as Dan Butler came on for County’s first substitution of the night.

There was certainly some confusion as to the amount of added time indicated at the end of the first-half, as the scoreboard was somewhat out of action. Regardless, the referee did eventually blow his whistle to bring the half to a close with the scores level.

It would be impossible to not believe that the weather had played a vital part in the opening proceedings. Both sides were having decent spells in possession, although were failing to create many meaningful opportunities of note.

Nouble was looking his menacing best as usual for the Exiles, while the defence were coping superbly with the constant physical presence from the Barnet attackers.

The wet and windy conditions continued into the second-half as-well, Tozer fashioning an opportunity on 52 minutes, as Charlie Clough did well to block the attempt at speed.

On 57 minutes, Exiles captain Labadie came on for his first appearance for the side in just over a month, taking the place of Robbie Willmott who seemed to suffer a head injury a few minutes earlier.

And the lack of opportunities transpired all the way past the 70th minute as both sides were still struggling to get a real foothold in the game.

However, on 73 minutes the deadlock was finally broken.

And Ben White was the man to get it – his first of the season and first in professional football. Stephens could only punch a delivery from the area into White’s path on the edge-of-the-area, who superbly guided his header into the empty net with perfect composure.

Amond may have got a touch to it on its way in, but by the way White was celebrating, he certainly thinks it’s his goal!

As the game approached it’s concluding moments, Barnet found their leveller with two minutes to go.

You would have to say it was a goal of high quality from the visitors. They worked the ball superbly through several phases in the middle of the park, before finding substitute Jamal Campbell-Ryce out wide.

His cross found Akinde unmarked in the area, who never needs a second opportunity to find the net, heading across goal into the far corner to draw his side level.

And they completed the turnaround in the first minute of additional time.

It was a carbon-copy of the first goal, this time Coulthirst the man heading the ball past Day, after another superb passing move.

Six additional minutes were indicated at the end of the game, substitute Shawn McCoulsky firing narrowly wide at the beginning of the added time.

But from there, Barnet held on resolutely under a huge bombardment from the Exiles to secure their first league win in 12 attempts.

Next up for County: Swindon Town (25th November) AWAY

SNEEK PEEK| Take a look at what's in this evening's programme.


It's another fact-filled and story-packed edition of the Newport County AFC matchday programme. Junior section, a word from the manager, an exclusive interview, and a look back at some key moments...