Newport County AFC will be looking to ascend back into the automatic promotion places of the League Two table when they travel to Swindon Town on Saturday. Despite not winning in either cup competition in the past week, County head into the game in good league form, whilst the home side are still finding their feet under a new manager. 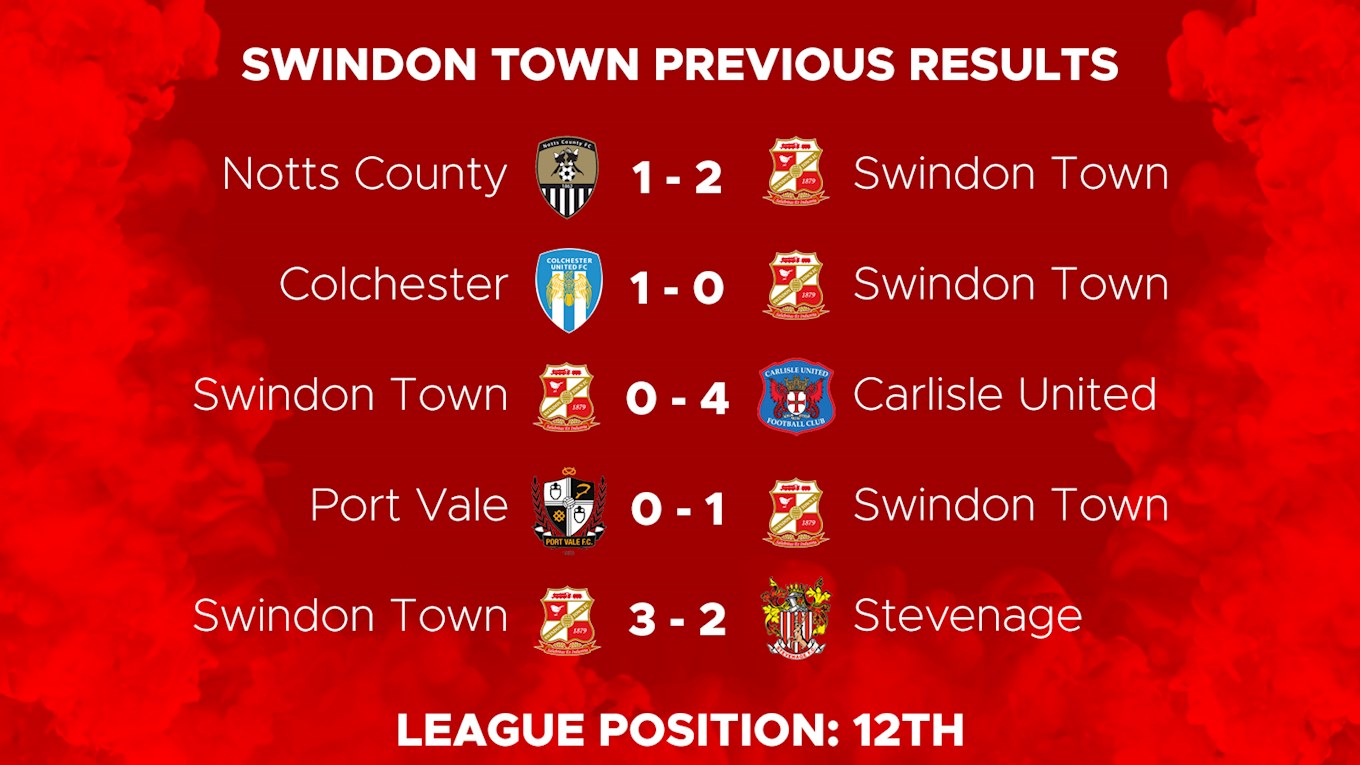 Despite a managerial change, Swindon Town have actually been on a good run of League Two form recently and have accrued nine points from the last 15 available.

That run starts on 27th October as they fought back to take all three points away at strugglers Notts County in a 2-1 victory. Kane Hemmings initially put the Magpies in-front, but Swindon hit back in the second-half through Steven Alzate and a late own-goal from ex-Exile Jamie Turley.

Next comes Phil Brown’s final league game in-charge of the Robins, which happened to be a 1-0 reverse at Colchester United. Sammie Szmodics’ goal in first-half stoppage time kept the resurgent U’s rolling, as they ascended into the play-offs and haven’t really looked back since.

In came Richie Wellens to the hotseat at the County Ground but his tenure certainly didn’t start on the best of footings as they were thrashed 4-0 at home to Carlisle United. Sheffield United loanee Regan Slater netted twice, whilst Ashley Nadesan and Jamie Devitt also found the target in a comfortable away victory.

Since then, things have improved for Wellens from a League Two sense anyway, securing his first victory as Robins boss with a 1-0 away victory at Port Vale. Elijah Adebayo's first-half strike was enough to secure all three points.

In their last league game, Swindon edged a five-goal thriller for the third time season – this one a home success over Stevenage. Youth products Scott Twine and Sol Pryce twice got the goals for the Robins – Scott Cuthbert and Joel Byrom with the replies. 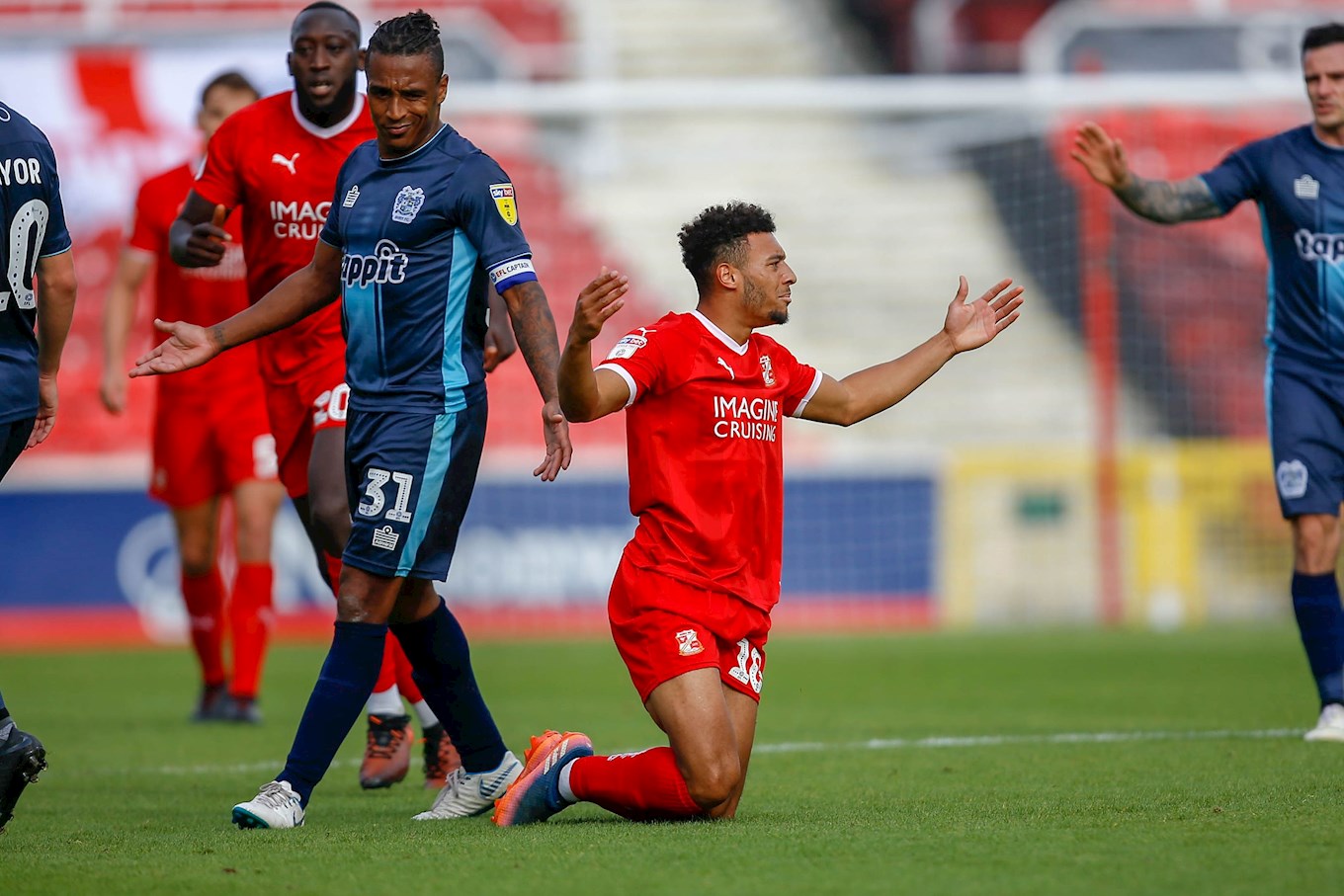 Swindon Town manager Richie Wellens could have to manage an attacking crisis ahead of welcoming County to Wiltshire on Saturday.

Kaiyne Woolery has been plagued by injury basically all season, with this latest knee complaint keeping him out of action since 23rd October.

Fellow experienced striker Marc Richards has been forced to miss out in the last six matches, and he is not expected to make a return any time in the immediate future.

Wellens said: “If we’d had a top striker, I think we would have won on Sunday [against Woking], because we had all the possession and territorially, we had more or less all of the game.

“Marc Richards will be out for quite a while, but Kaiyne Woolery will be back soon. I am looking forward to seeing Kaiyne – he gives us a different dimension and gives us that explosive pace up front.

“If you look at him, physically he is a man and he is very quick. I am looking forward to getting him back.”

Wellens’ concerns will at-least be eased by the fact loanee Elijah Adebayo has now completed his suspension, but Keshi Anderson may only make the bench having damaged his hamstring last weekend.

One to Watch – Steven Alzate 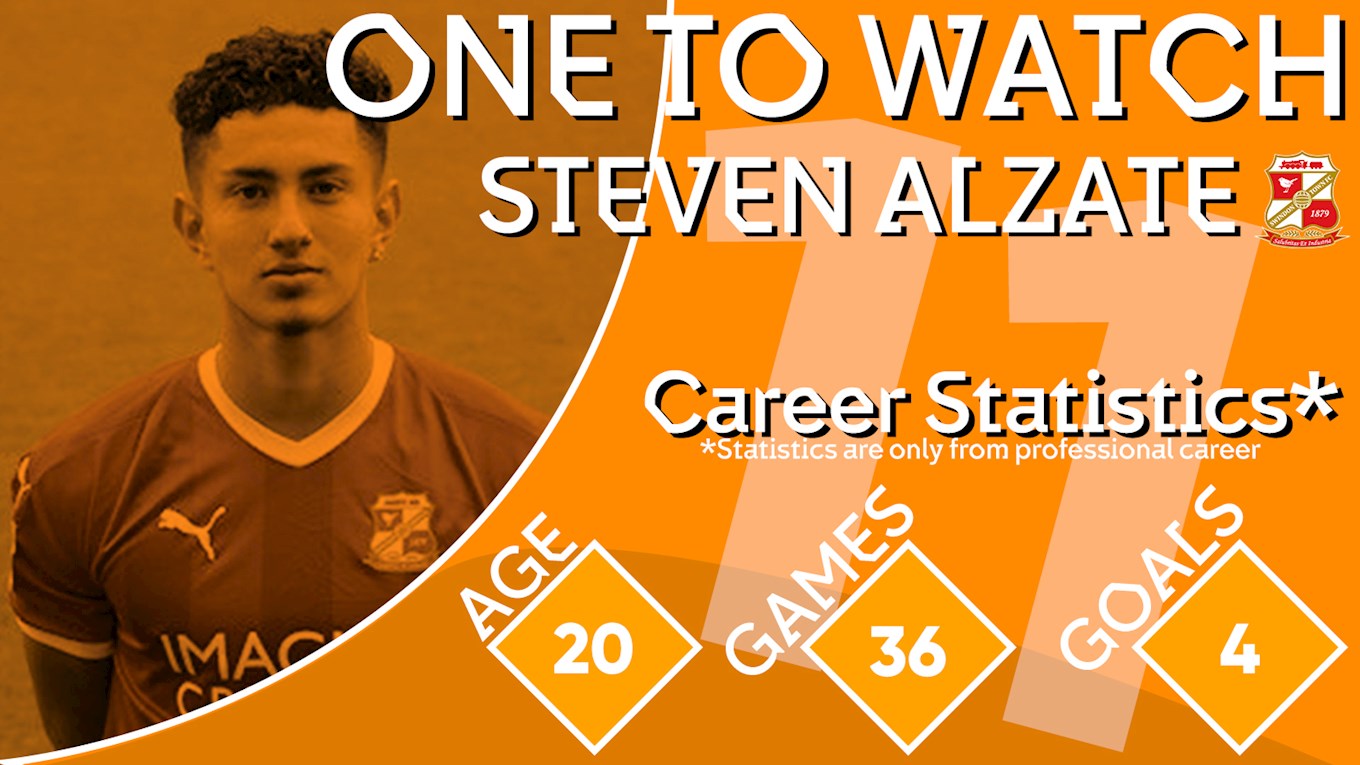 Brighton & Hove Albion loanee Steven Alzate has been virtually a mainstay in the Swindon Town team this season and has certainly accustomed to life on loan in Wiltshire.

Known for his attacking intent from midfield, Alzate has been influential all season with several assists and key passes, alongside getting three goals himself from 24 appearances against Yeovil Town, Notts County and York City in the Emirates FA Cup.

It is the 20-year old’s second spell in the Football having come through the ranks at Leyton Orient.

He made his League Two debut on 28th February 2017 as a late substitute against Stevenage – before scoring his inaugural professional goal in his first start, that coming against County in Graham Westley’s final game in charge.

Alzate couldn’t help Orient stay in the Football League as they were relegated alongside Hartlepool United in County’s ‘Great Escape’ season – but he alerted Brighton with his performances and he signed for the club on 31st July 2017.

He’s yet to make a first-team appearance for the Seagulls but he had a good season with the U23s side, socring twice on his debut against Shoreham and helping Simon Rusk’s team win promotion to the top-flight of U23 football. 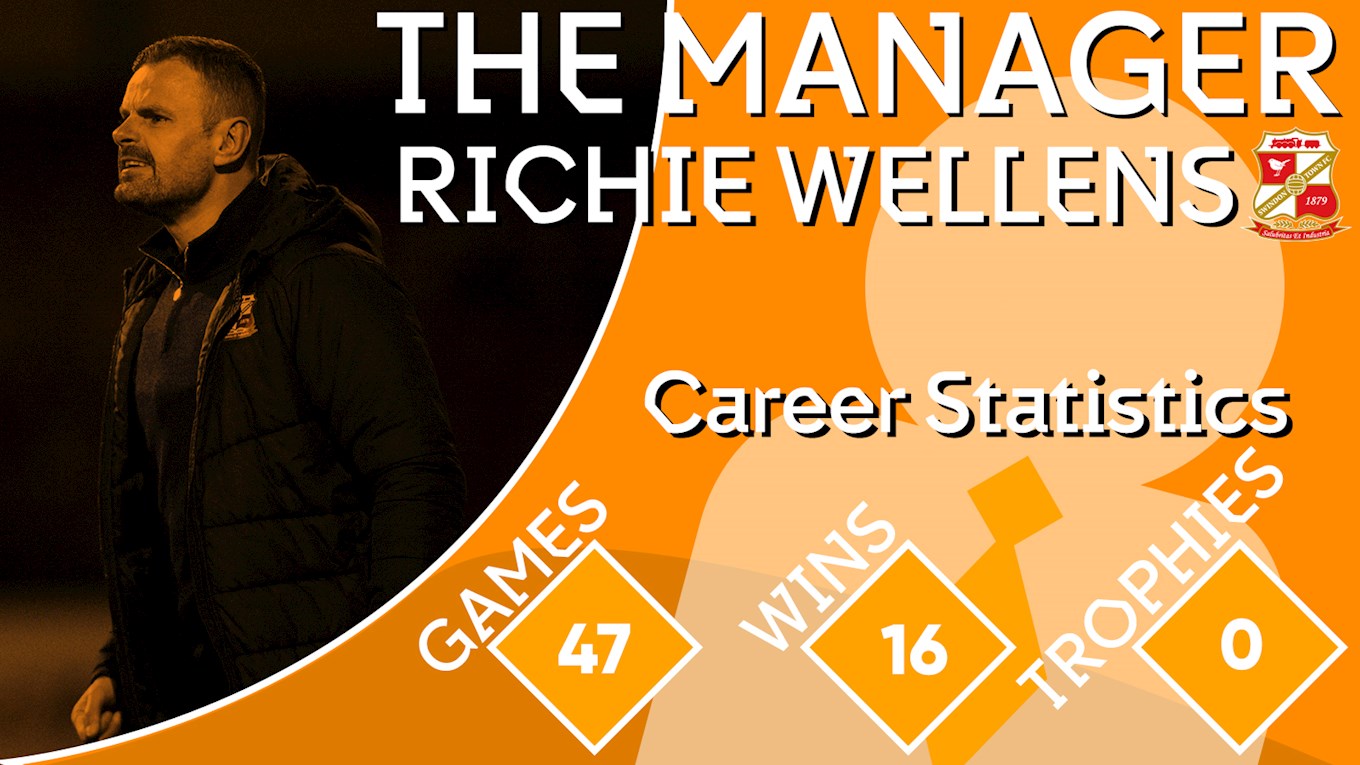 A relatively inexperienced manager, Richie Wellens was a surprise appointment at the County Ground following Phil Brown’s dismissal, but he’s done well in-spite of a host of injury concerns.

The 38-year old has won 50% of his four matches as Swindon Town manager, but he wouldn’t have been impressed with being dumped out of the Emirates FA Cup by Woking or the 4-0 defeat in his first game in charge.

It is only his second job in management, having previously been handed the reigns at former club Oldham Athletic.

Initially joining as a first-team coach in July 2017, he was put in caretaker charge just over two months later after a miserable start to the season for the Latics.

Apparently, the candidates for the permanent job were Wellens and Manchester United legend Paul Scholes – but a five-game unbeaten run during the caretaker spell saw Wellens given the nod.

It didn’t quite go to plan for him, however, and he was sacked at the end of the season having failed to keep the Latics in the third-tier of English football. 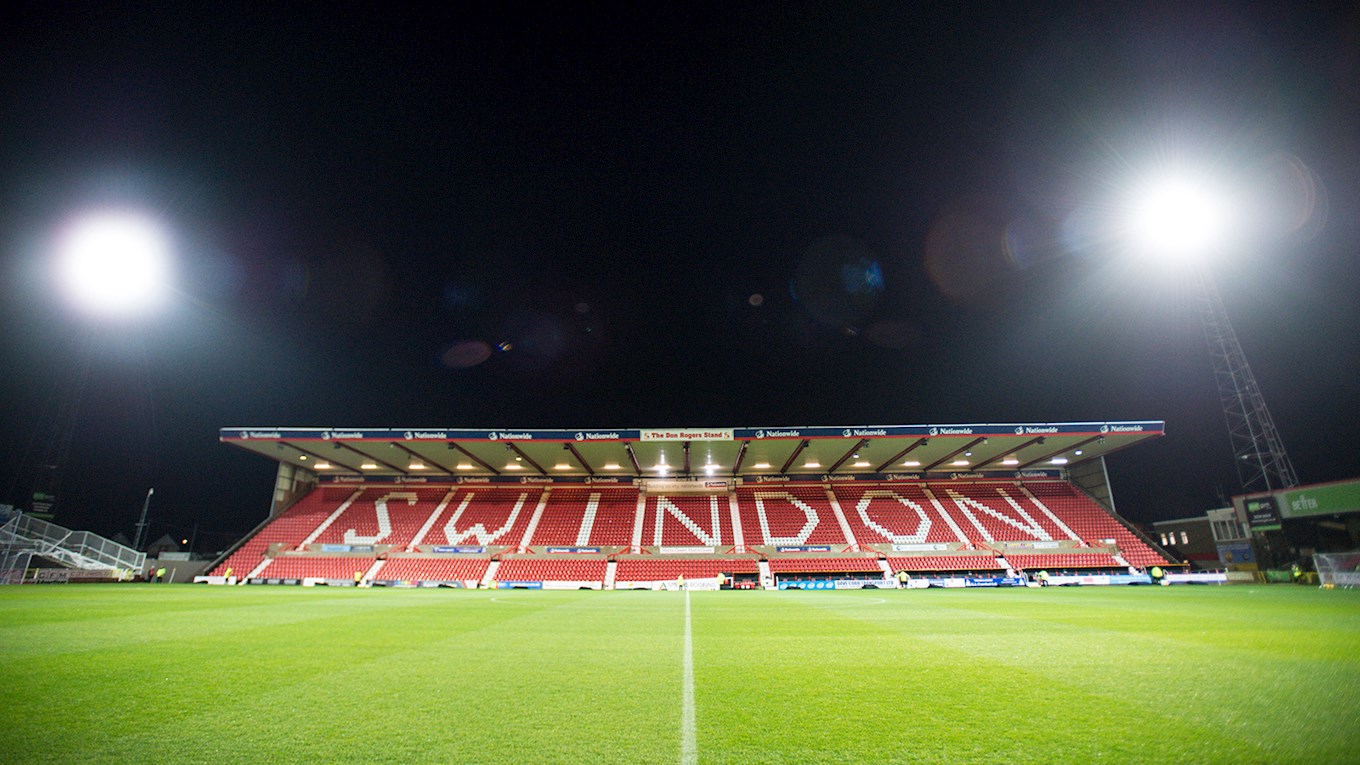 It has been an all-seater stadium since the early 1990s – around the time that the Robins played their one and only season in the Premier League – and has an official capacity of 15,728.

Before that conversion from partial terracing, the stadium obviously had a much bigger capacity and it’s record stands at 32,000 on 15th January 1972 during the 2-0 defeat to Arsenal in Round Three of the FA Cup.

Away from Swindon Town, the stadium has also hosted some England international matches, mostly U17s, but also including the women’s game against the Netherlands in 2007. It is also thought that the County Ground would provide a training base for a selected nation if England wins the right to host a future World Cup.

The County Ground can also be used for non-sporting events. Most notably, Elton John, Lulu and Bryan Adams have performed at the Wiltshire venue.

On matchday, County supporters will be housed in the western corner of the Arkell’s Stand, where up to 1,200 fans could be accommodated. If necessary, a further 2,200 seats are available in the Stratton Bank, behind one of the goals.

The Exiles have only visited the stadium twice since reformation in 1989, starting with 25th November 2017 when Ben Tozer scored the winner in a 1-0 victory. A total of 880 County supporters attended that day.

Earlier this season, County lost 1-0 at the County Ground in the CheckaTrade Trophy as Michael Doughty scored a spot-kick. Swindon Town were unable to provide an exact away attendance, with the total crowd being 1,301 on 11th September 2018. 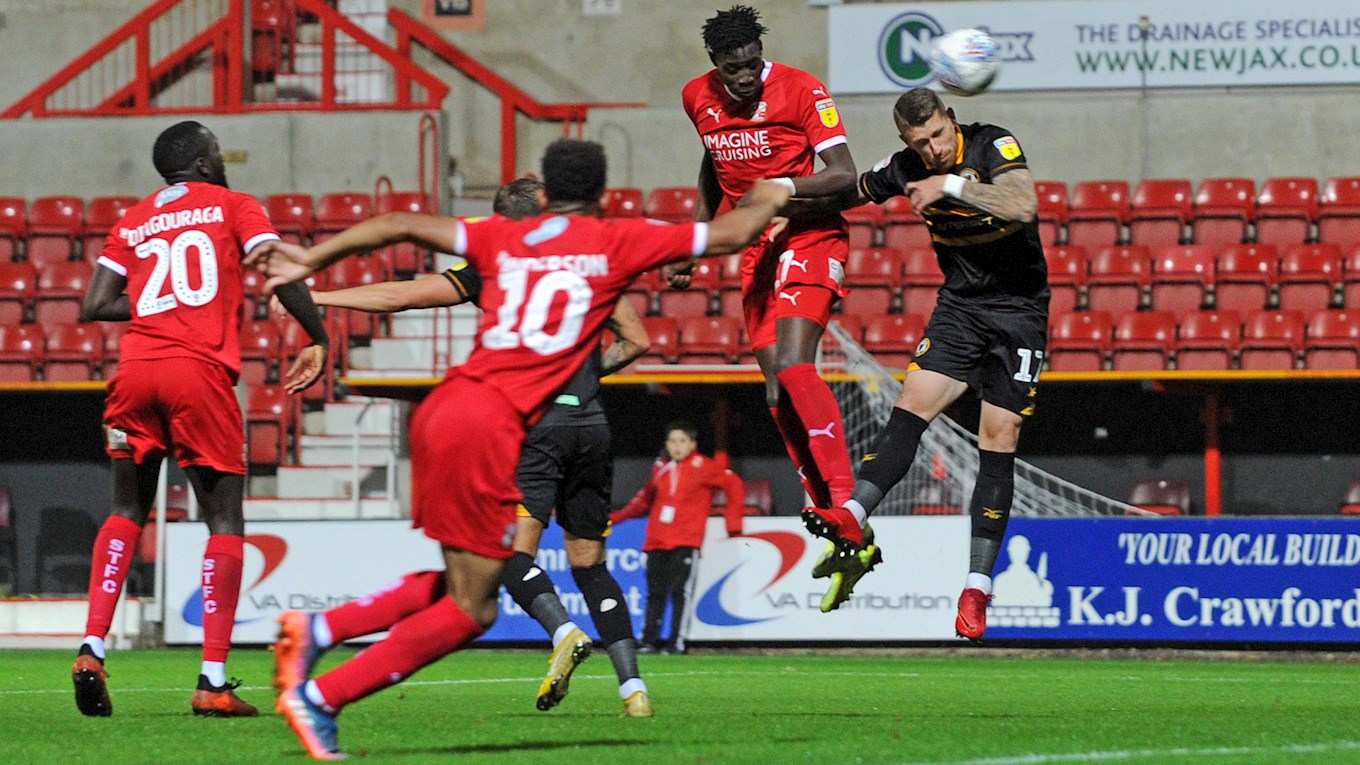 Chances were certainly few and far between in Wiltshire, as neither side could really create too much against two very solid defences.

The first chance of note probably should have been scored by the home side, but Keshi Anderson badly miscued his attempt when sent clear on 14 minutes.

Shots on target became even more scarce in the second-half but Swindon were given a glorious chance to win the tie when Scot Bennett was adjudged to have felled the effervescent Elijah Adebayo in the area.

Substitute Doughty did the rest, converting his fifth penalty of the season by chipping it straight down the middle when Nick Townsend went to his left.

Read the full match report from the County Ground.

Mike Flynn said: “I thought there was nothing between the sides in the game. It was a cheap penalty for us to give away if I’m honest, but I thought it was good for us to get some minutes into a few of the boys tonight.”

Mark O’Brien added: “We wanted to go out and try and prove a point to ourselves, get up to match speed and try to give the manager some problems with regards to making decisions for the team. There was nothing really much in the game, just a penalty in it but it’s just one of those games. If we had maybe created a few more chances, then who knows? We could have gone on to win it.” 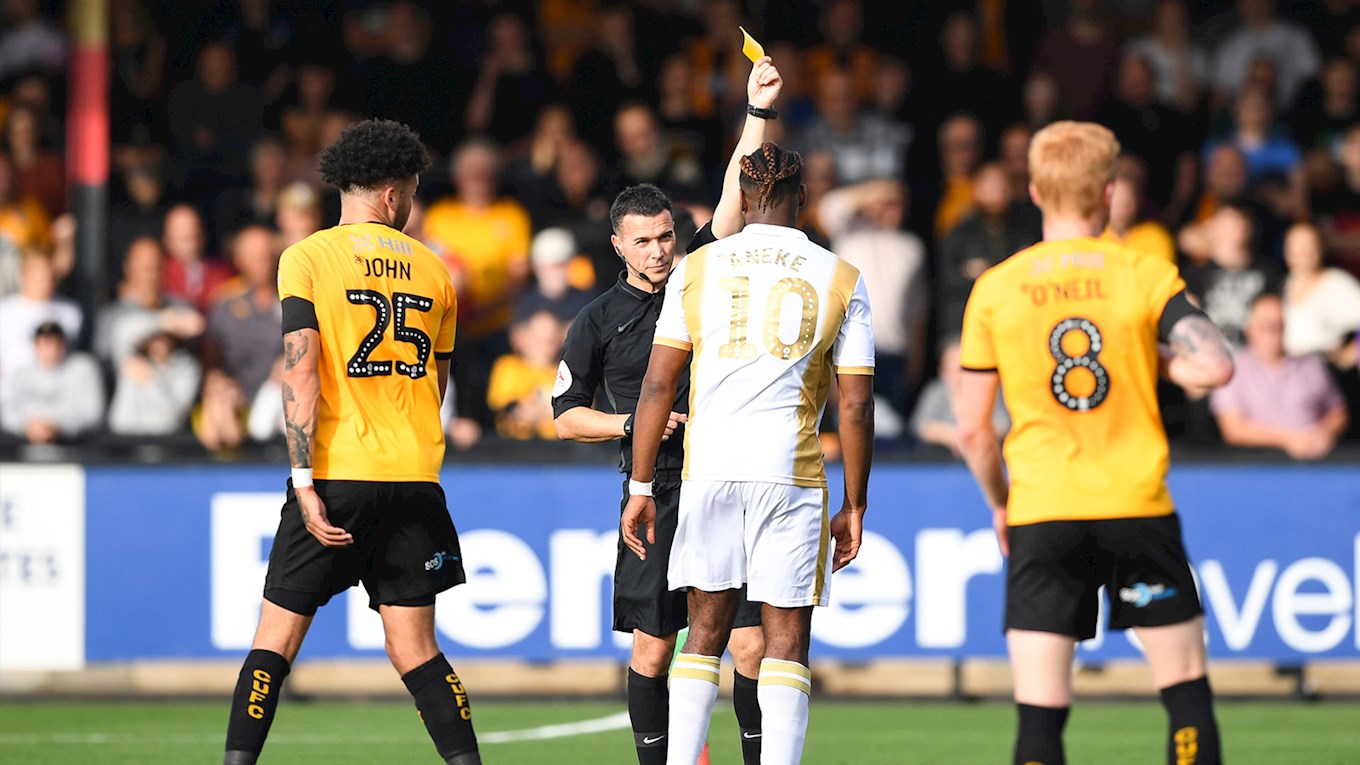 Whitestone is currently embarking on his 13th full season as a Football League referee having officiated his first game in League Two on 22nd October 2005 as Notts County and Carlisle United played out a 0-0 draw.

So far this season he has refereed 19 matches, giving out 57 yellow cards and three red cards, including three yellows and two reds on the opening day of the season as Bury FC beat Yeovil Town.

Two fixtures have passed this season without Whitestone going to his pocket – Portsmouth’s emphatic victory at Maidenhead in the Emirates FA Cup on 10th November and Lincoln City's victory over Carlisle United in the same competition on 1st December.

His record number of yellow cards distributed in a single fixture came in the other game where he showed a red card – Simon Cox dismissed alongside five yellows as Coventry City triumphed at Southend United on 20th October.

Those statistics follow on from refereeing a total of 39 matches across all competitions in the 2017/18 campaign, a season in which Whitestone gave out 97 yellow cards and three red cards throughout the entirety of the campaign. 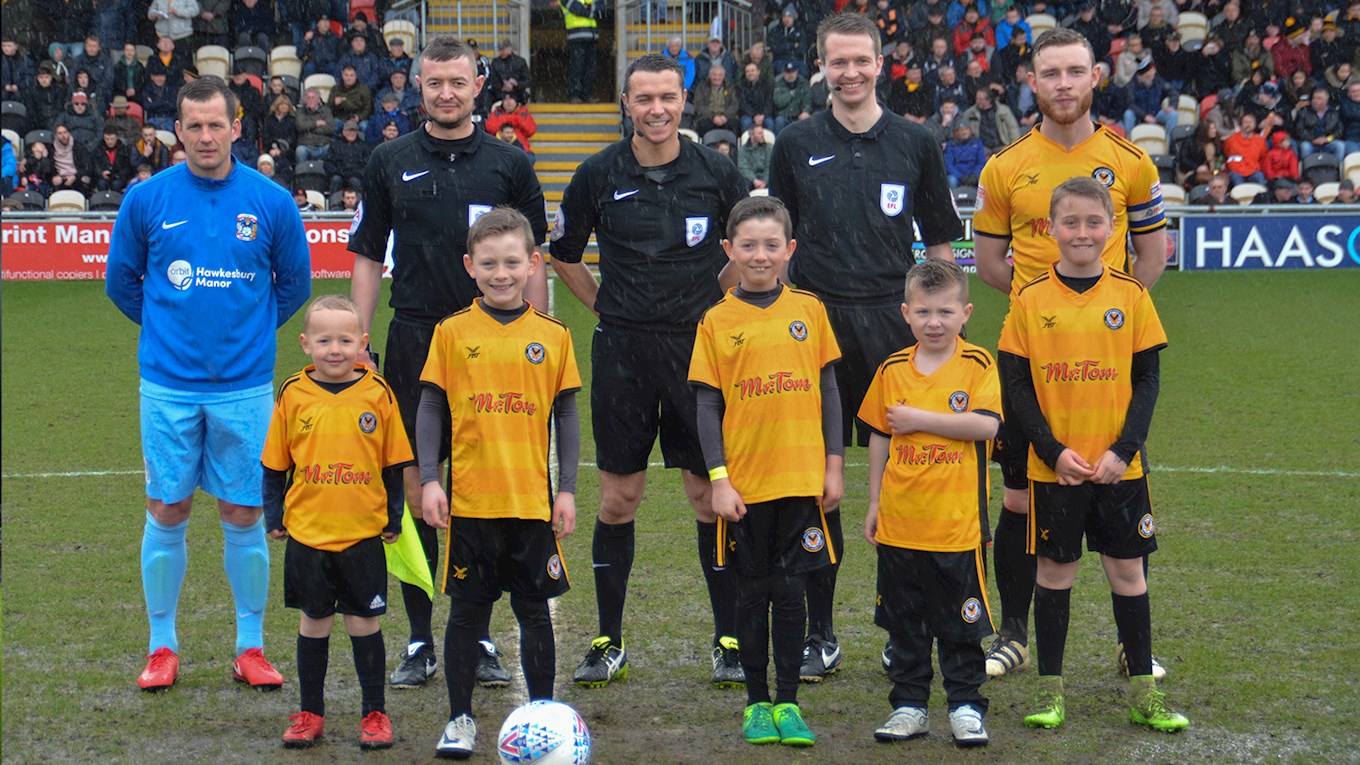 Whitestone has refereed a match involving Newport County AFC on eight previous occasions in League Two and the Emirates FA Cup. The Exiles have a mixed bag of results from the previous matches, having won twice, drawn three and lost the other three.

He only refereed County once last season, that coming in the 1-1 draw with eventual play-off winners Coventry City at Rodney Parade on 30th March 2018. Mark O’Brien was booked.

In 2016/17, Whitestone refereed three County matches including both ties with Yeovil Town – where the home side triumphed 1-0 each time on 15th October 2016 and 14th April 2017 respectively. Jon Parkin was booked at Huish Park, Mark Randall at Rodney Parade.

The other game that season was arguably the most heart-breaking one as Whitestone awarded two penalties to Plymouth Argyle as the Pilgrims set up an away trip to Liverpool with a 1-0 victory on 21st December 2016. Darren Jones was booked.

In 2015/16, Whitestone officiated a further two matches, starting with the 1-1 draw at home to Exeter City in John Sheridan’s first match as Exiles manager. No yellows produced to either side.

The other match came in the Emirates FA Cup as County booked a home tie with Blackburn Rovers by narrowly beating Barnet away from home on 5th December 2015. Matt Partridge the offender for County at the Hive.

In 2014/15, just the one County game from Whitestone as the Exiles lost 2-0 against AFC Wimbledon on 7th February 2015. Darren Jones and Max Porter were both shown a yellow card, whilst Kevin Feely was shown his marching orders.

That just leaves the nail-biting 3-3 draw at Accrington Stanley on 11th January 2014. David Pipe and Rene Howe the offenders from a County perspective that afternoon.