Newport County AFC will be looking for their first Football League victory against Colchester United since 25th April 1981 when they travel to Essex on Saturday. The Exiles will also be seeking revenge after the U’s became the first team to win at Rodney Parade this season back in October, while the home side will be seeking a first win in eight matches after a recent drop in form.

County head to the Weston Homes Community Stadium on Saturday to face one of the few League 2 teams who haven’t won yet this year.

The U’s were on the cusps of the play-off places before the turn of the year, but a run of form that has seen them pick up just four points from their last six games has played havoc on their hopes of a top-seven finish.

That run of form actually starts with their final game of 2017 which ended in a 0-0 draw to relegation threatened Chesterfield.

And they started the New Year as they ended the previous one by again drawing 0-0, this time in a home tie against Cambridge United on New Years Day.

They finally scored in their next game, however, although they would have been mightily frustrated to suffer a 4-1 home defeat to Cheltenham Town.

Kurtis Guthrie had given the U’s a lead on 40 minutes, but they were somewhat hampered by Kyel Reid’s dismissal in first-half stoppage time.

Cheltenham certainly took advantage of the extra man by cruising to a rare away victory - Sanmi Odelusi, Nigel Atangana, Jerell Sellars and Mo Eisa all scoring in the second-half to turn the game on it’s head.

Striker Adebayo Akinfenwa and Paris Cowan-Hall both scored in the first-half to give the Chairboys a healthy advantage, while Luke O’Nien put the game beyond any doubt early in the second-half.

Sammie Szmodics did get a goal back for Colchester, but it was to be in vain following the comprehensive defeat.

They were required to find an equaliser to prevent it becoming three defeats on the bounce after a 1-1 draw at home to Grimsby Town.

Charles Vernam gave the Mariners an early lead with a 25-yard strike, before Sean Murray also found the net from distance to ensure the points were shared at the Weston Homes Community Stadium.

In their last match, the U’s were minutes away from a first win of the year at Port Vale, only for the Valiants to get a late equaliser in the 2-2 draw.

Courtney Senior scored his first professional goal to give Colchester the lead, before Dave Worrall found a first-half equaliser.

Drey Wright restored the lead for the U’s on the day, only for Worrall to score again to make sure Colchester’s winless run since Boxing Day continued.

All those results see Colchester United in 11th position, only three points off County and seven points from the play-off positions despite their recent dip in form. 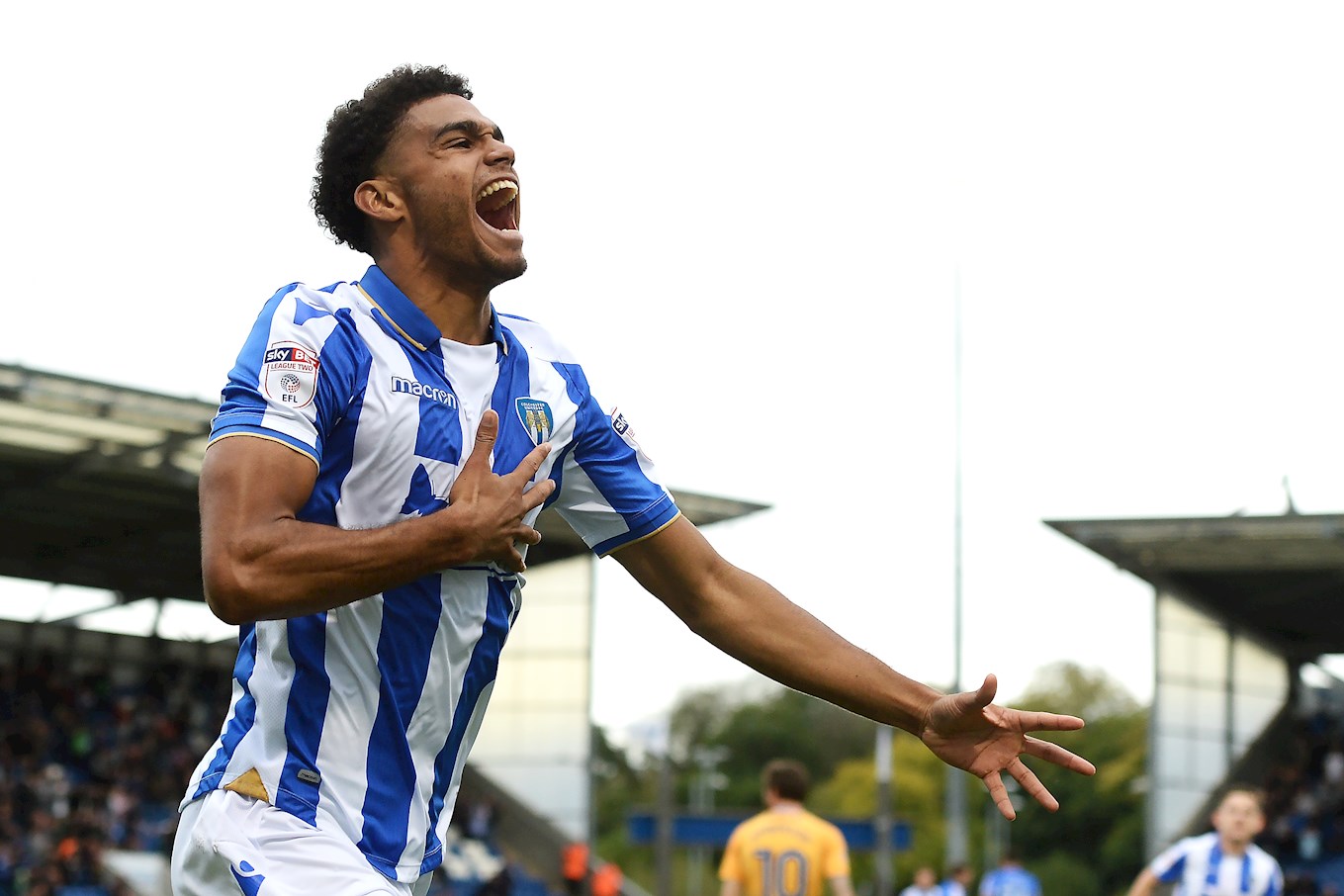 The U’s have a couple of injury concerns ahead of our trip to Essex.

They will have to check on the fitness of defender Ryan Inniss, who has missed the last few games with an ankle injury.

Winger Brennan Dickinson has also been stepping up his recovery from a serious knee problem by playing in an U23 game on Thursday, so may not be risked at the weekend.

Club captain Luke Prosser was able to come on as a late substitute last time out against Port Vale, although it is unclear whether he has recovered enough from his knee injury to start from the off on Saturday.

All these concerns saw manager John McGreal make two changes to his side at the weekend, as Courtney Senior and Mikael Mandron were deemed fit enough to return to the starting side.

One to Watch – Sammie Szmodics 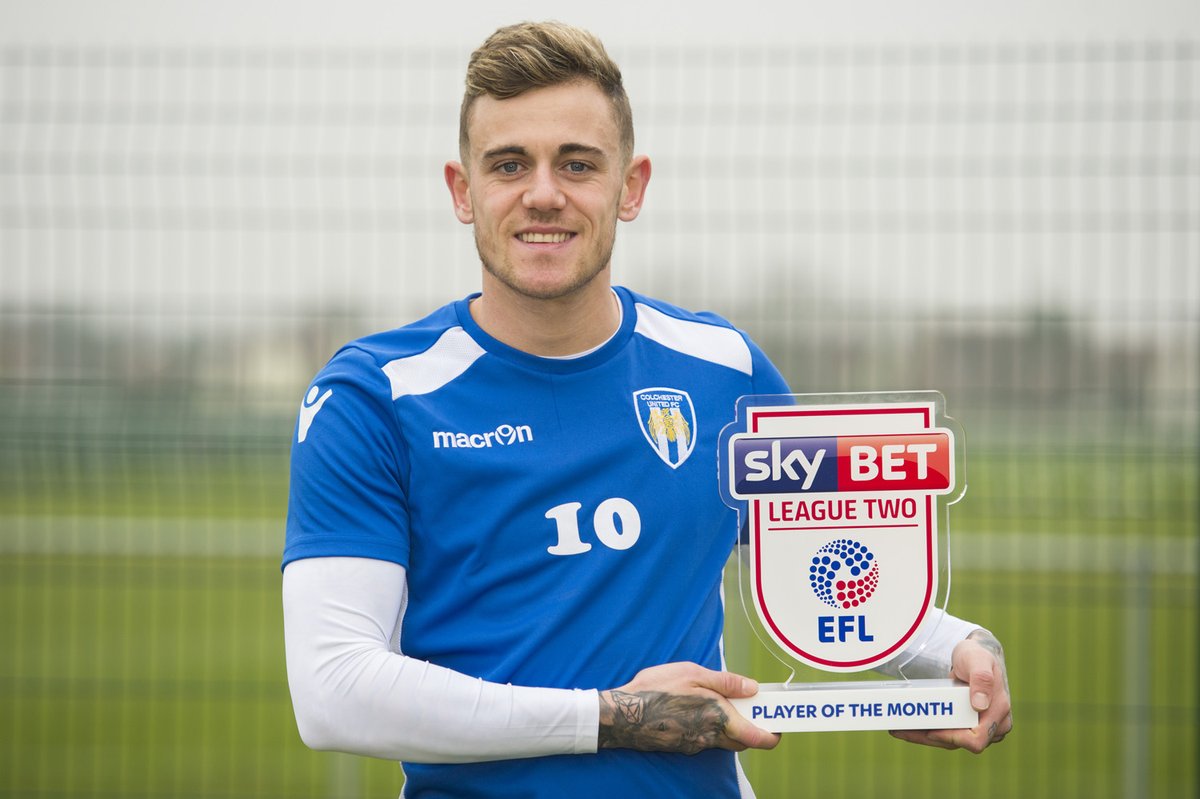 Sammie Szmodics has been one of the form players in League 2 this season by already achieving his best goal scoring return for a campaign.

Impressively, Szmodics has 13 goals already this campaign, those strikes coming despite the winger having to miss around six weeks of action through a serious knee injury.

Seven of the goals have come at the Weston Homes Community Stadium this season, five of which have come in wins against Lincoln City, Forest Green Rovers, Crawley Town and two against Exeter City.

Away from home Szmodics has found the net in three wins, grabbing the winner at Barnet alongside goals against Swindon Town and Crawley Town.

The 22-year old has also been on the scoresheet in the defeats at Accrington Stanley, Cheltenham Town and Wycombe Wanderers.

Six of his goals have come during the last 10 games as Szmodics continues to shine at the only permanent he has played for.

In-fact, the local born player has been with the club since the age of seven, making the progression into the first-team in preparation for the 2013/14 season.

He came on as a substitute during a draw with Bristol City for his professional debut on 28th September 2013, although didn’t hold down a regular position in the Colchester first-team that season.

Szmodics joined Braintree Town on a short-loan spell during the 2015/16 season, but was recalled after just three games and two goals when Tony Humes was dismissed as Colchester manager.

The 22-year old recently celebrated his 100th appearance for the club in the draw with Port Vale, scoring 23 goals in the process, whilst also winning the League 2 player of the month award for December. 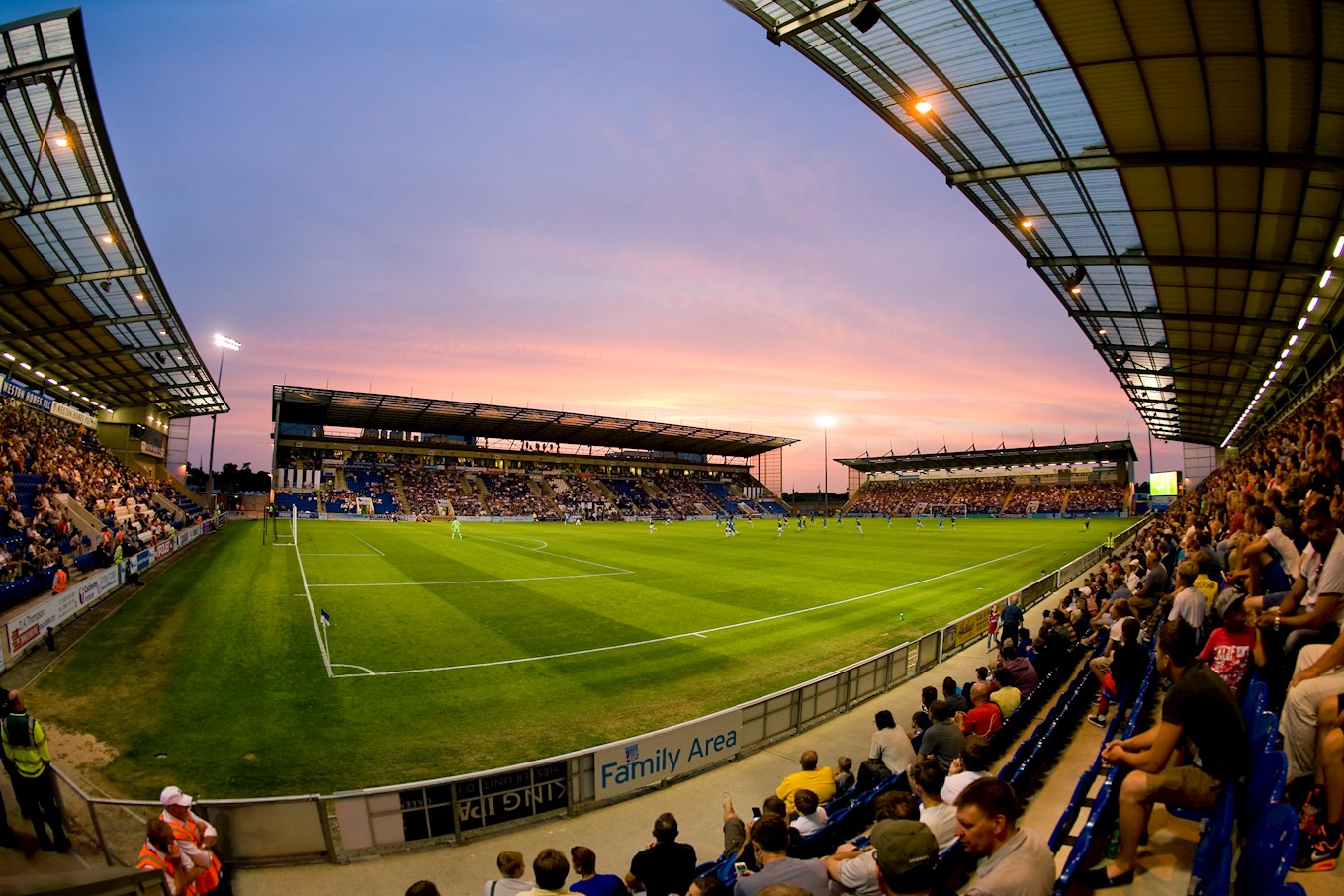 One of the newer stadiums in the entirety of the Football League, the Weston Homes Community Stadium has been in existence since August 2008.

It is just the second ground that the U’s have occupied, following a 71-year stint at their old stadium Layer Road.

It has also played host to several England youth games, whilst it staged its first ever Women’s international back in November.

Away fans are likely to be housed in the far end of the JobServe Stand for this match, which runs along one side of the pitch.

It will be the second time that County have visited the stadium following their 0-0 draw in Essex last season on 8th October 2016.

The game represented Sean McCarthy’s final game of his temporary stint as caretaker manager, with Graham Westley watching from the stands before taking charge of the club.

157 away fans travelled for that fixture. 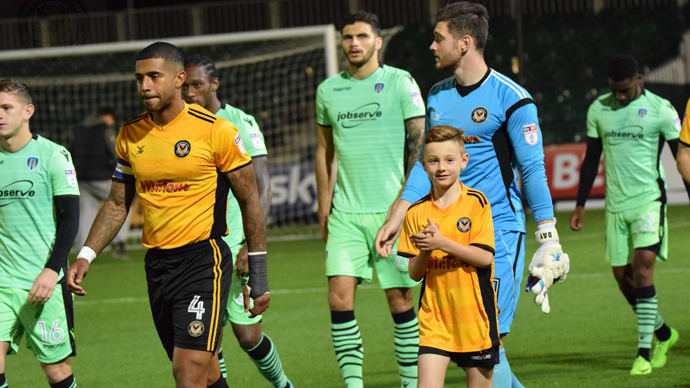 Ex-Exile Ryan Jackson came back to haunt his old side while Mikael Mandron also scored as Newport County AFC suffered their first home defeat in all competitions this season to Colchester United.

There was only one shot on target during an otherwise dull first-half, Brandon Hanlan forcing a strong save from Joe Day to keep out the attempt from a tight angle.

Joss Labadie had County’s best chance of the opening 45 minutes, although was mightily unlucky not to connect fully with Frank Nouble’s cross across goal and put the chance over the crossbar.

Padraig Amond saw a header cleared off the line by Brandon Comley as the Exiles pushed for an opener on the night, only for the away side to score twice in quick succession to put the game beyond County.

Mandron’s looping pass found Jackson in the area on 72 minutes, who steadied himself before firing through the legs of Mickey Demetriou and past Joe Day into the back of the net.

That became two just five minutes later as Mandron got his name on the scoresheet. Sam Murray’s inviting cross into the area got a faint touch on it from Mandron, as Colchester got their just rewards for a dominative previous 20 minutes.

The Exiles weren’t done there, however, as Shawn McCoulsky got his sixth of the season with five minutes to go.

Dan Butler’s cross from halfway was launched into a crowded Colchester area, the ball eventually affording McCoulsky a short window of time to fire past Sam Walker in the away goal.

That set the game up for an intriguing finale but the U’s held on resolutely to secure a credible away victory at Rodney Parade.

Mike Flynn said: “It was a really frustrating night. I can’t fault the effort of the players because they were fantastic, kept fighting until the end but I just felt we were a little too open in the second half and we were punished for the chances we missed when it was 0-0.”

Colchester manager John McGreal added: “I'm sure clubs up and down our league wouldn't have fancied us tonight but we do have a bit of resilience. It was a terrific away performance against a team that could have gone top three tonight.” 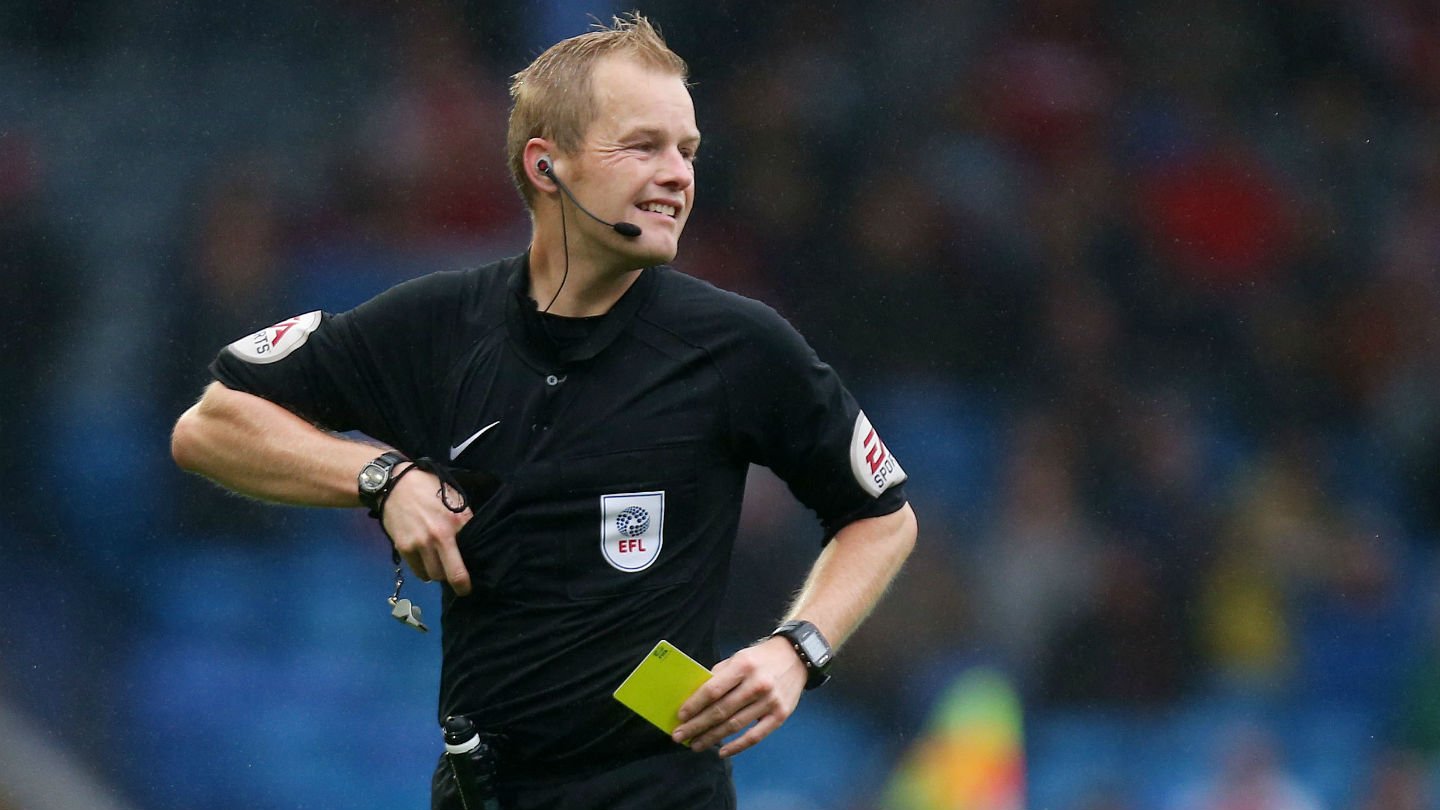 Ward is currently in his eleventh season as a Football League referee.

He has taken charge of 31 previous games this season, the last of which came on Saturday in Crawley Town’s 2-1 home win over Accrington Stanley.

Ward brandished five yellow cards in that game, taking his season tally up to 86 yellow cards and four red cards from the 31 games.

That follows on from last season where Ward’s record stood at 150 yellow cards and six red cards from 41 matches.

Five of those games have come in the league, while one came in the Emirates FA Cup, with County securing three victories, a draw and two defeats from the games.

He has already overseen two County games this season, the first of which came in the 1-0 victory over Cheltenham Town when Padraig Amond scored the winning goal in tough conditions at Rodney Parade. Three yellow cards were given out on the night, Matty Dolan the offender for the Exiles.

The second game came as County started their Emirates FA Cup run with a 2-1 home victory over League 1 outfit Walsall.

A first-half goal from Frank Nouble and a second just 25 seconds after the restart from Shawn McCoulsky gave the Exiles victory in-front of the S4C cameras, while Amadou Bakayoko got a goal back for the Saddlers.

No yellow cards were given out on that afternoon by Ward.

Only one County game was refereed by Ward last season, which came in the 4-0 home defeat to Leyton Orient. Joss Labadie and Mark O’Brien were booked for the Exiles.

Ward officiated County twice in the 2015/16 season. The Exiles were unbeaten in those two games, the first a 1-0 success over Mansfield Town. Six yellow cards were given out in all during that game, Scott Boden, Yan Klukowski and Mark Byrne booked for County.

The second game came in the 1-1 draw with Oxford United. Danny Holmes and Tommy O’Sullivan were both cautioned in the only two bookings of the game.

His first County match came on 6th April 2015 when County lost 2-0 away at Exeter City. Ismail Yakubu was sent off in that game, with Mark Byrne also booked for County.