Newport County AFC will be looking for the same standard of performance from Saturday’s draw with Tottenham Hotspur when they travel to face Lincoln City on Tuesday night. The Imps had the weekend off after this fixture was temporarily delayed for the Emirates FA Cup, but will go into the game just as confident as County after settling well into an impressive first campaign in the Football League.

Here, you can find all the facts and statistics ahead of this League 2 encounter. Including all of the ticket information you need for out visit to Lincoln.

All tickets for visiting supporters will be available at the main Lincoln City F.C ticket office which is situated opposite the 3G pitches under the Selenity stand. 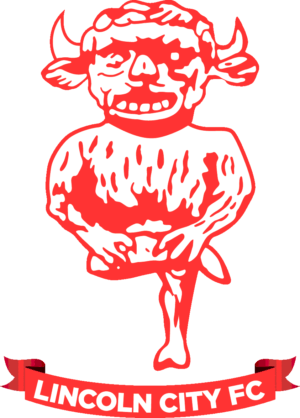 County will head to Sincil Bank on Tuesday night for the first time in over five years to face a Lincoln City side on a steady run of league form in addition to recently securing themselves a semi-final tie with Chelsea U23s in the CheckaTrade Trophy.

The Imps have picked up nine points from their last 18 available, having won two, drawn three and lost just one of their last six matches in League 2.

That run actually starts with the reverse fixture against County on 23rd December, as a point took the Imps into the play-off places and 6th position in readiness for Christmas Day.

And they ensured that they ended a jubilant 2017, a year they won promotion to League 2 by storming the National League and becoming the first non-league side to reach the quarter-finals of the Emirates FA Cup in over 100 years, in good form by winning their final two matches at home.

Harry Anderson gave them a slender half-time lead on Boxing Day against Stevenage, before Matt Green and Josh Ginnelly added the gloss to the occasion with two goals late on in the routine 3-0 victory.

It was Matt Rhead’s turn to be the match-winner at Sincil Bank for the final game of the year, his two goals either side of a consolation from Christian Doidge giving them a 2-1 success over Forest Green Rovers.

But they couldn’t continue their impressive end of year form into 2018 and were edged out in a 4-2 thriller at Kenilworth Road on New Years Day.

Michael Bostwick took advantage of Alan Sheehan’s early red card by firing home the resulting free-kick in just the sixth minute, before Luton found their way back into the game through James Collins.

Matt Green restored the advantage against the ten men, but Harry Anderson was soon shown his marching orders as both sides were sent down to 10 men.

James Justin then found an equaliser for the league leaders before half-time, while Danny Hylton and Harry Cornick secured the victory for the Hatters in the final 20 minutes of the game.

Their first home game of 2018 was also an entertaining one, this time sharing the points with Notts County in-front of a sell-out crowd at Sincil Bank.

Jon Stead gave the Magpies an early lead, before Lee Frecklington found the net on his second debut for the Imps. Matt Green then turned the game on it’s head, only for Jorge Grant to strike late and secure a point for the away side.

And Lincoln went three without a win in their last league match as they were held to a 1-1 draw at Barnet in Graham Westley’s first game in charge of the Bees.

John Akinde gave Barnet a half-time lead as Lincoln struggled to get any sort of foothold in the game, although manager Danny Cowley’s half-time substitutions certainly provided some worth as James Wilson scored with his first touch to ensure the game finished level.

That saw them to 8th position in the League 2 table, but they now sit two places further back after not playing at the weekend due to County’s involvement in the Emirates FA Cup. 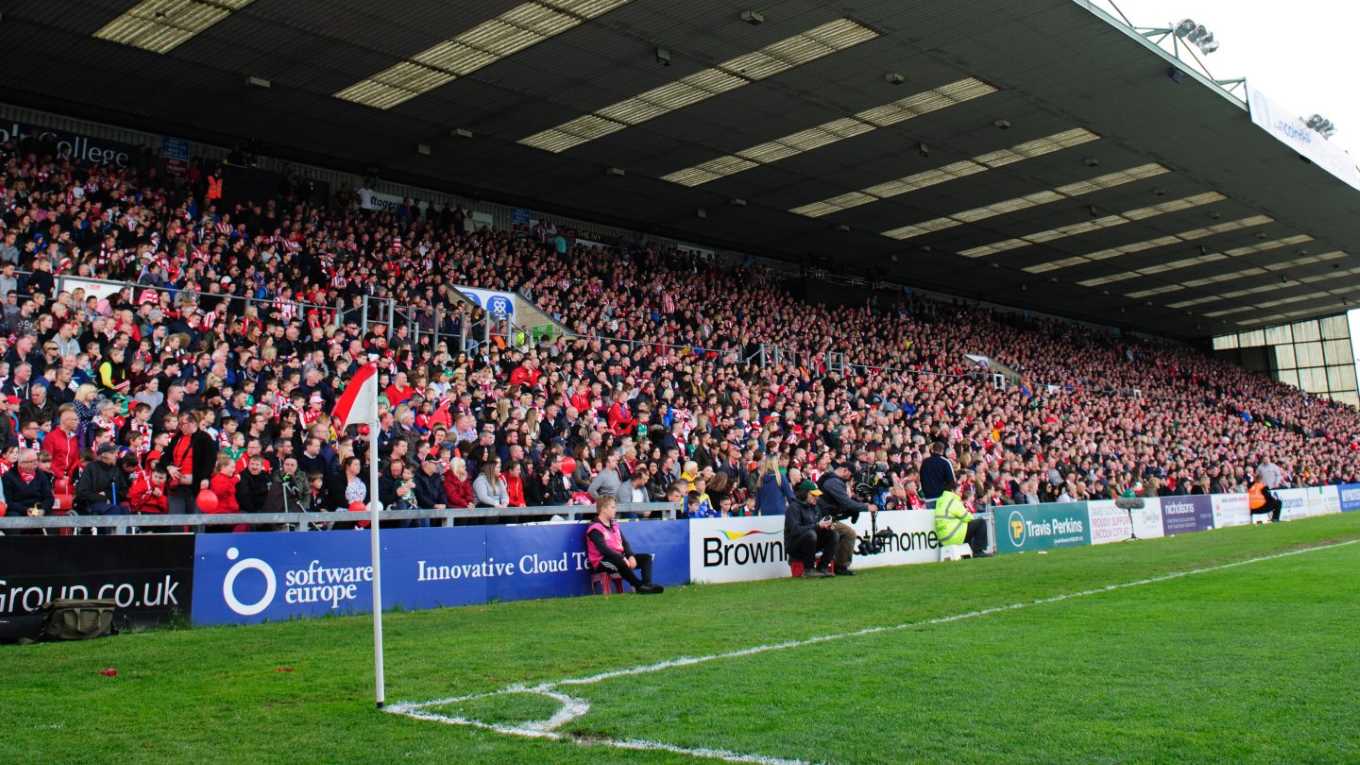 Danny Cowley is expecting to be able to call upon January addition Lee Frecklington for our trip to Lincolnshire.

The midfielder was withdrawn during their CheckaTrade Trophy victory over Peterborough United a week ago, but Cowley is expecting his talisman to be fit and ready for the game.

He said: “It was just precautionary. He has a tight hamstring, so we have to be careful with him.”

Cowley is also likely to have Matt Rhead back. The striker was another player to feel a problem against Posh but again should make a recovery.

He added: “Rheady again was also tight in his hamstring. He gets through so much work for us and it’s difficult for him.”

Due to seeing the game with County pushed back by three days, Cowley named a full-strength side for that home tie with Peterborough and is expected to name a similar team again at Sincil Bank.

One to Watch – Matt Green 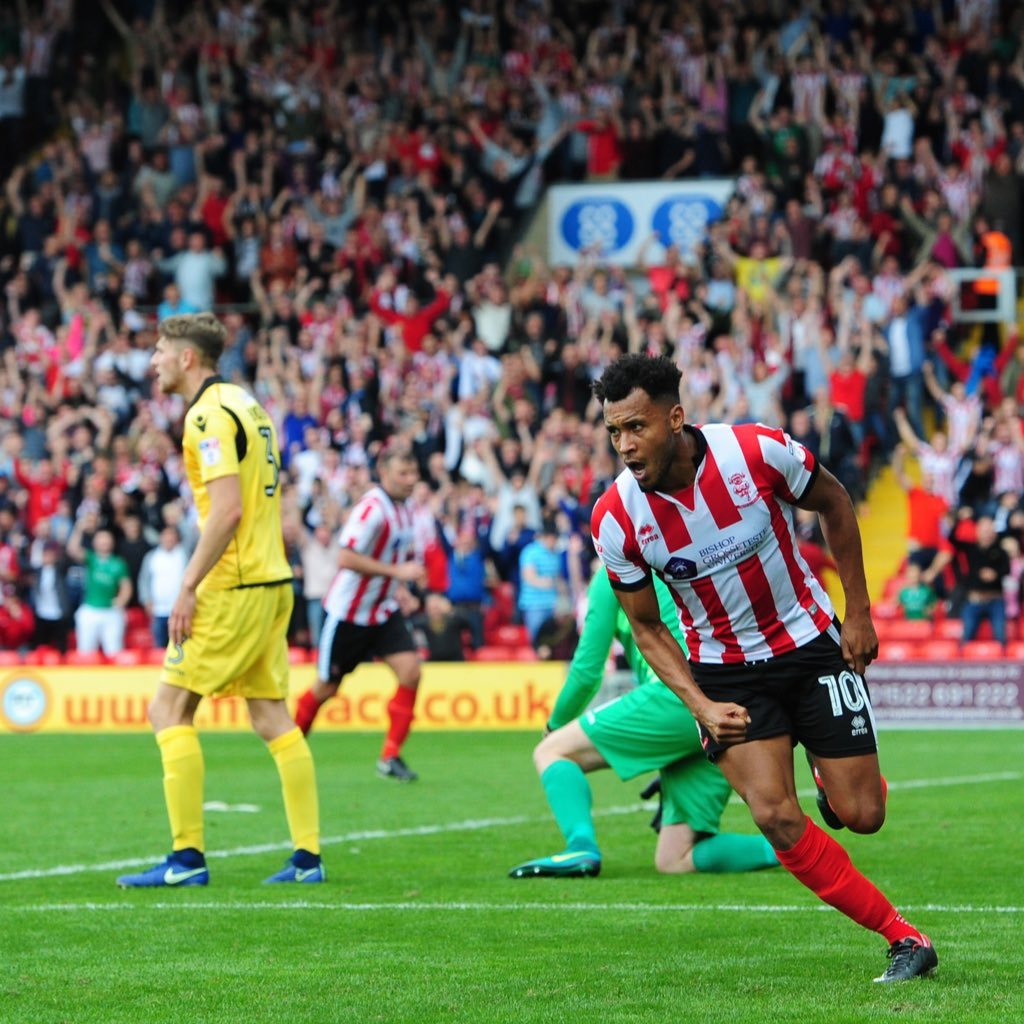 Matt Green has certainly hit the ground running at the club that he joined just last summer.

The 31-year old has 11 goals already this campaign, seven of which have come in Lincoln wins, while they have drawn a further three games and only ended up losing in one of the games in which Green has scored.

His goals can be split into eight in League 2 and three in the CheckaTrade Trophy, while Green has also been sent off in a tumultuous season so far.

The striker is also on a rich vein of scoring form at the moment, eight of his goals have come from his last 12 appearances, while he also has numerous assists from what is looking like a lethal strike partnership with fellow Imps attacker Matt Rhead.

Green will be a familiar name to several County fans as the 31-year old actually started his career with the club after former player Steve Lowndes recommended his signature.

He played a starring role for the time he was with the Exiles, finding the net on 12 occasions whilst in the Conference South, before making the switch to Cardiff City for £10,000.

But Green could never really hold down a starting spot in the Championship and ended up signing for Torquay United following loan spells with Darlington and Oxford United.

Only five goals in that 2008/09 season saw him back on loan again with Oxford United, this time a much more fruitful experience for the striker as he helped the club secure promotion to the Football League with a goal in the play-off final.

But in the January of his first permanent season with Oxford, Green again found himself out on loan, moving to Cheltenham and Mansfield Town, before signing permanently with the Stags.

That 2012/13 campaign was his best season to date as he hit 27 goals for the club from 49 appearances, helping Mansfield join County in League 2 by winning the Conference title.

Birmingham then came calling for his services in the Championship, signing a two-year contract in the Midlands after a successful trial.

But he was released after those two years having scored just two goals, re-joining Mansfield before joining the Imps this summer.

All this means Green has scored 140 career goals to date, while he has also been capped by the England ‘C’ team. 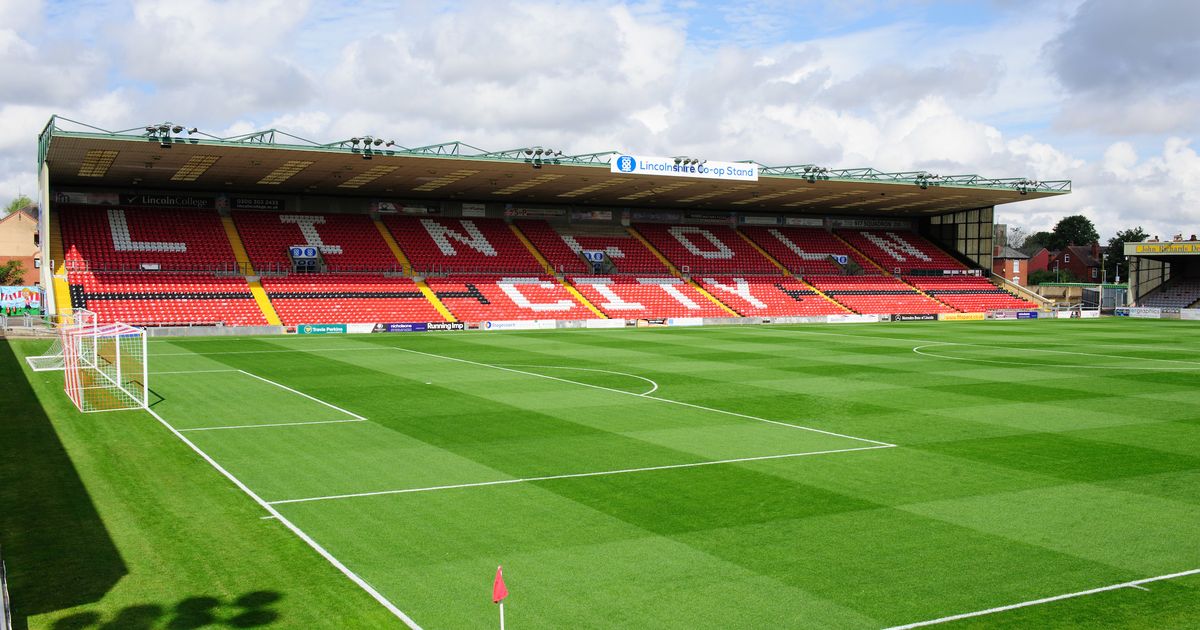 Sincil Bank has been home to Lincoln City since being built in 1895.

Interestingly, it is only the second stadium that the Imps have occupied since their inception in 1884, a short spell at the John O’Gaunts ground also occurring for the Lincolnshire outfit.

Overlooked by the magnificent city cathedral, the stadium has a current capacity of just over 10,000, although has seen higher attendances in the past.

Away fans are expected to be housed in the Bridge McFarland Stand and Poacher’s Corner on matchday.

It is the first time in over five years that County have visited Sincil Bank, the last time coming on 12th January 2013 in a 4-2 away victory.

Robbie Willmott scored a double on debut, while Aaron O’Connor also found his name on the scoresheet twice. Vadaine Oliver and Chris Bush responded for the Imps on that occasion.

126 away fans made the trip for what was a Saturday afternoon clash in the Conference. 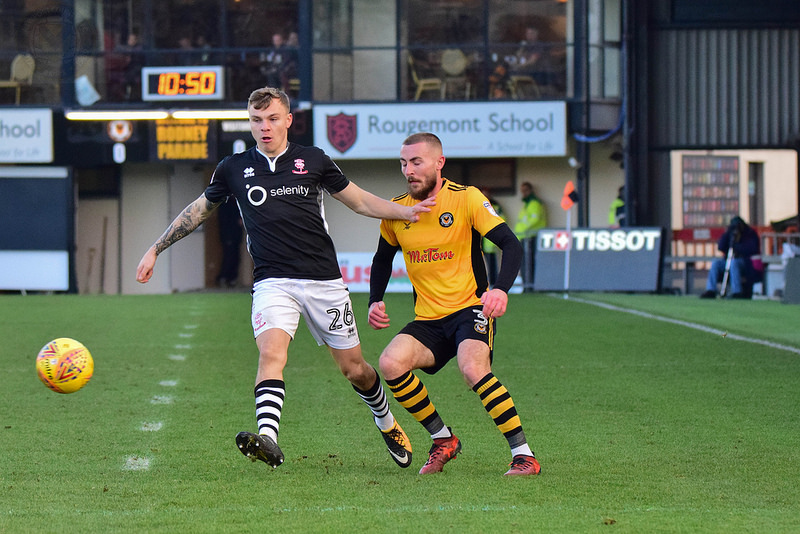 And the Exiles certainly had to get their point the hard way at Rodney Parade as Mark O’Brien was dismissed for a straight red card after 55 minutes for a late challenge on Imps striker Matt Green.

Chances were few and far between both before and after the red card incident, although both goalkeepers were still forced into a smart save apiece.

Away captain Luke Waterfall had the best of those rare chances, Joe Day having to produce a stunning one handed save to keep out the centre-back’s header from a looping corner which looked destined for the far corner.

Imps right-back Neal Eardley also fashioned a decent opportunity on the stroke of half-time, but after skipping past David Pipe out wide could only fire straight at the leg of Day as County kept a first home league clean sheet for over two months.

County’s best chances on the day fell the way of Shawn McCoulsky.

After 17 minutes Frank Nouble did well to turn his man out-wide before firing the cross across the six-yard area, which McCoulsky managed to meet under the pressure of the two centre-halves, but could only fire a foot wide when on the turn.

Matty Dolan also came close with a free-kick in the closing stages, but the two sides couldn’t be separated on their first meeting for over five years, as County ended 2017 at Rodney Parade in the same way as they started it by getting a point.

Mike Flynn said: “I’m very happy because I thought that was our best performance of the season. When you have to play with ten men for 35 minutes then I think I would have taken a draw all day long. But like I said, I still thought we were the better team with 10 men. I thought we were excellent today.”

Lincoln manager Danny Cowley added: “We said before the game that if you’re soft here then you will lose because it’s a difficult place to come. We probably didn’t play well enough to win so that’s what we’re disappointed about. A draw was probably the fair result.” 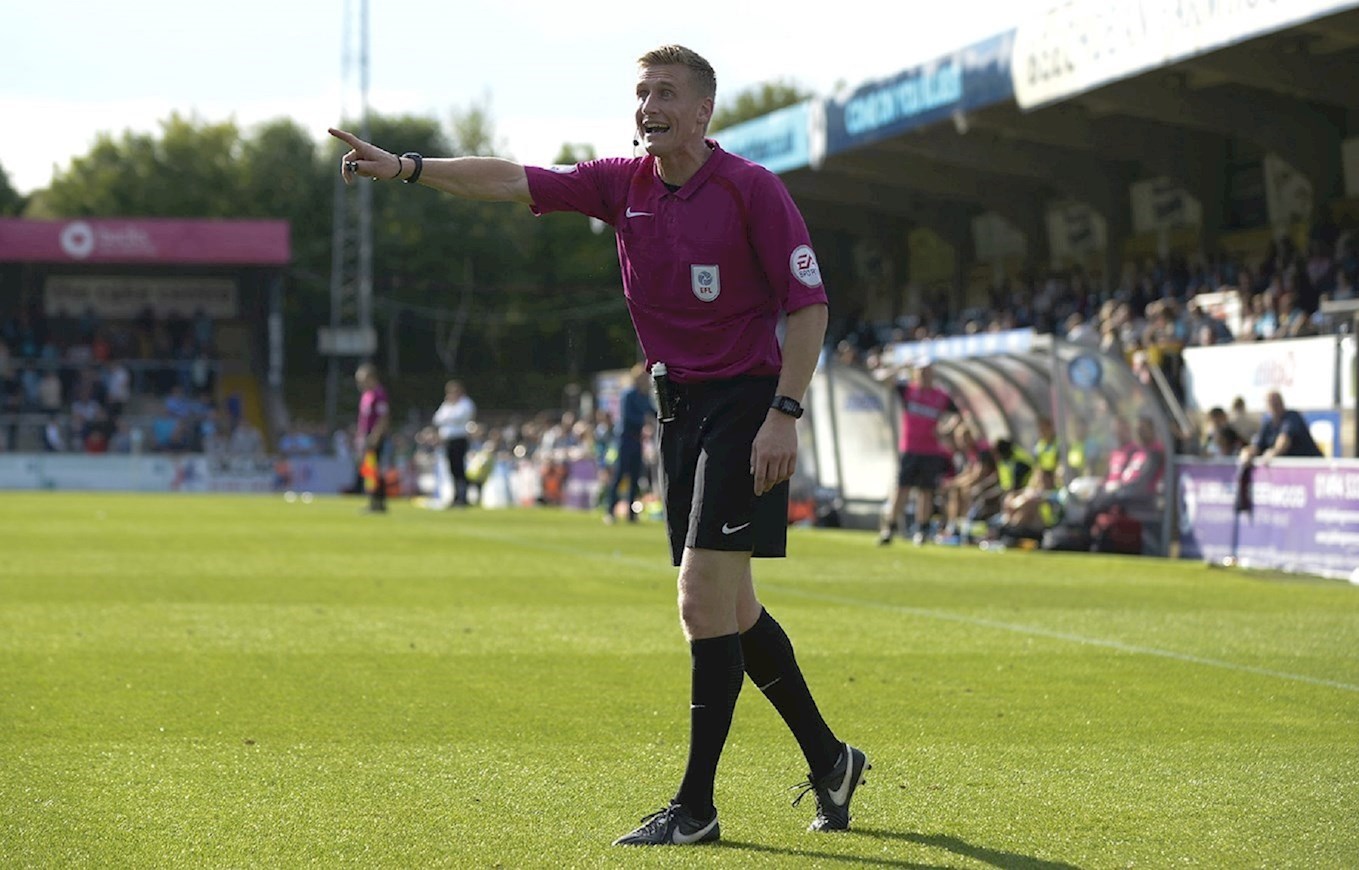 Oldham is currently embarking on just his first season as a Football League referee having been promoted from the National League at the end of last season.

His first Football League game came as Cheltenham beat Crawley Town 1-0 on 12th September 2017, while his most recent match came on 23rd January as Crawley Town secured an unlikely 2-1 away victory at Notts County last Tuesday.

Those games come as part of the 25 games he has overseen so far this season, brandishing a total of 68 yellow cards and five red cards in the process.

That follows on from his record last season which reads as 49 yellow cards from 18 matches. 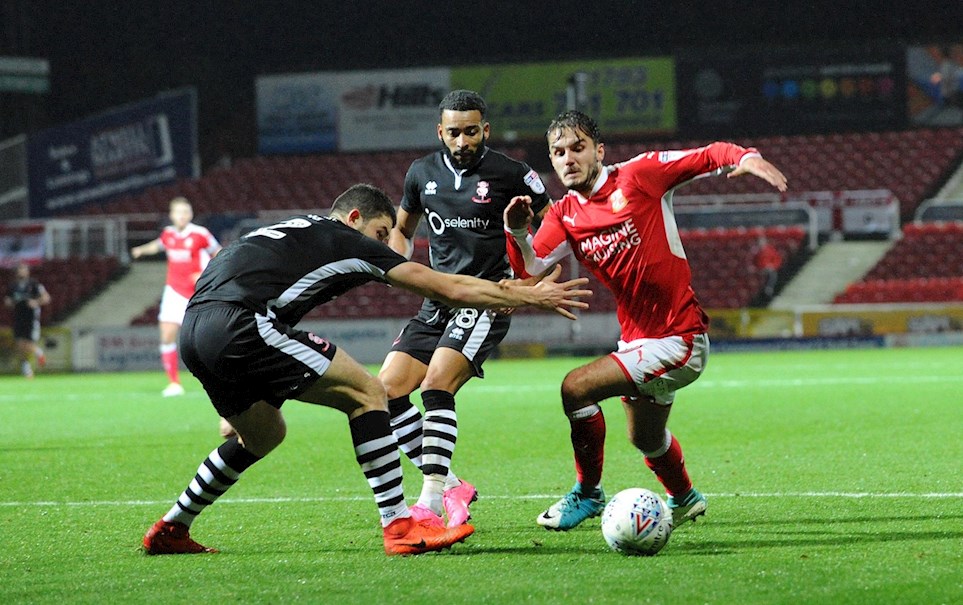 Interestingly, it will also be his first trip to Sincil Bank, although he has refereed the home side on one occasion this season.

Sean Raggett’s header secured the Imps a 1-0 victory at Swindon Town during that game, while Michael Bostwick and Nathan Arnold were both shown yellow cards by Oldham.

Other League 2 fixtures that day (All 7:45pm kick-offs unless stated)

Don’t forget – if you reside outside of the UK, you can watch the game live by subscribing to County’s iFollow service. Commentary by Tim Thraves can also be found at the Match Centre from 7:30pm.