Newport County AFC will be looking to continue their march towards the League Two play-offs when they entertain Tranmere Rovers on Saturday. The Exiles haven’t won three successive league games since early September, while the away side will be hoping to restart another winning run after a surprise defeat in midweek. 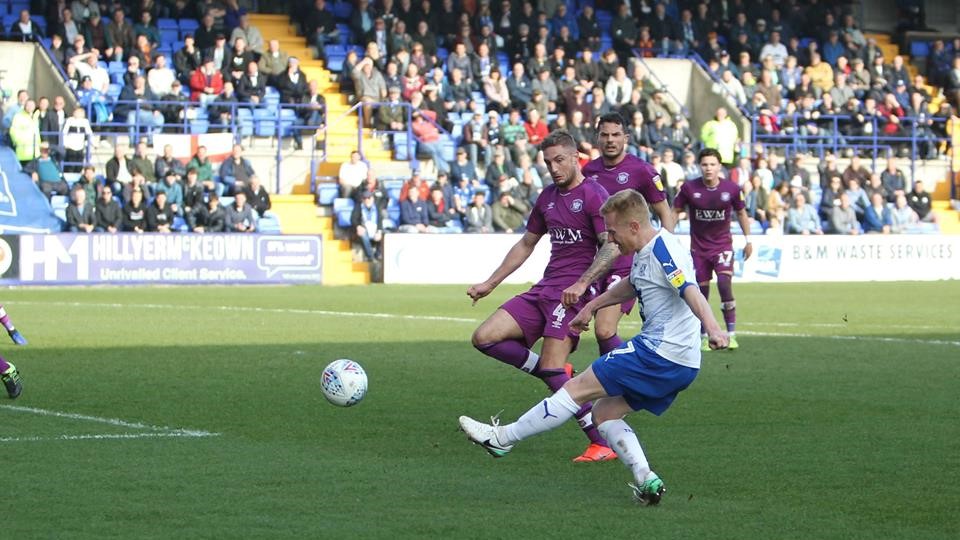 Micky Mellon’s Tranmere Rovers side remain the form side in League Two despite their long standing winning and unbeaten runs coming to a surprise end in midweek.

Despite the recent defeat, they still boast the most points acquired over the last five matches having secured 12 points, with even runaway league leaders Lincoln City picking up a point less than that amount over the same time frame.

It’s been a remarkable run of form for the side who have only just returned to the Football League and they are virtually guaranteed a play-off berth with 67 points – and they would have only been a point off the automatic promotion places had they won in midweek.

James Norwood has scored in four of the last five matches – taking his tally up to 29 for the season – including netting the winner in the narrow home victory over Crewe Alexandra on 8th March.

The Super White Army then thumped Grimsby Town 4-1 at Prenton Park, before securing back-to-back clean sheets during the extremely impressive 2-0 victory at play-off chasers Colchester United and the 3-0 demolition of Carlisle United.

On Tuesday, Rovers went to mid-table Oldham Athletic looking to keep their seven-match winning run and nine-game unbeaten streak going. But it all came to end as Callum Lang’s double condemned them to defeat at Boundary Park. 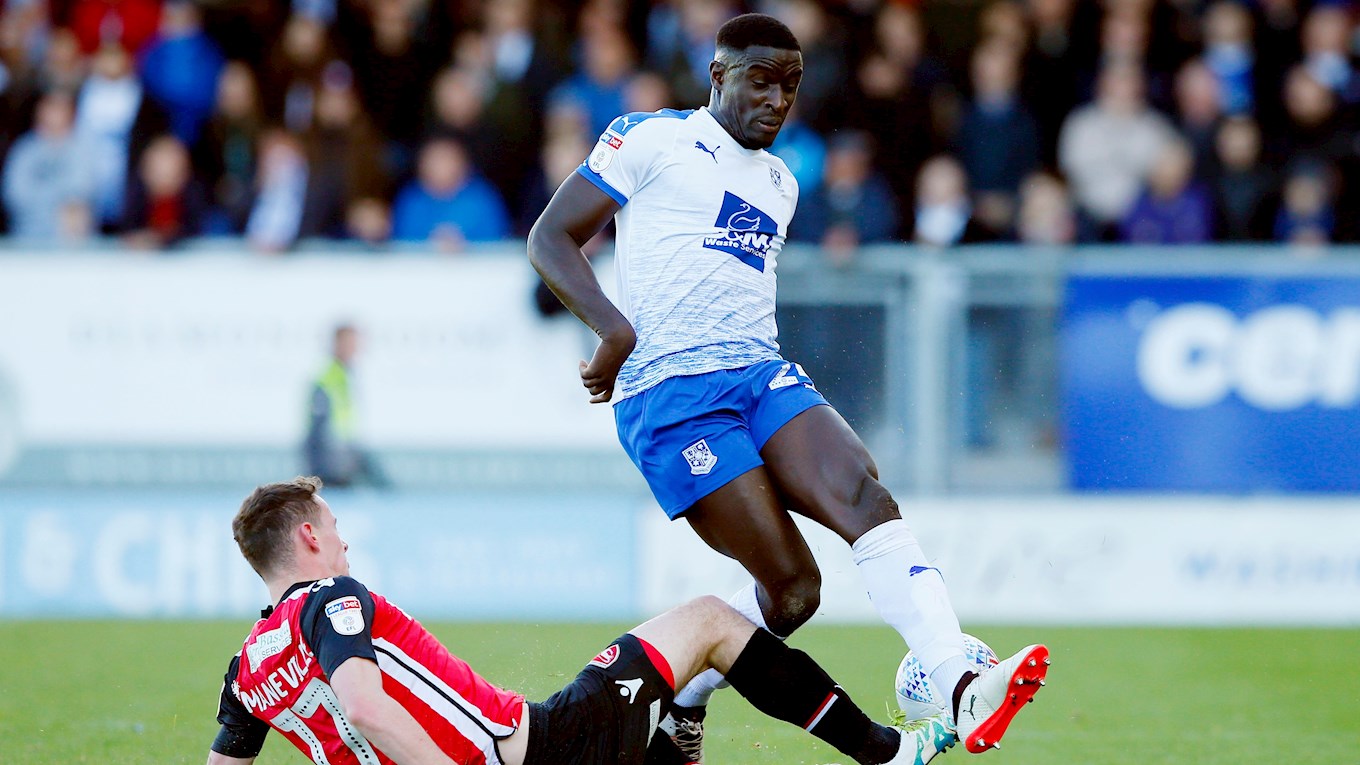 Tranmere manager Micky Mellon will have a couple of injury concerns to contend with as he prepares to bring his squad to Rodney Parade for the first time since 2015.

Mellon confirmed in his post-match press conference on Tuesday night that Doncaster Rovers loanee Luke McCullough will be absent for the remainder of the campaign.

He said: “It looks like he has got a cruciate knee ligament injury so his season is over which is really unfortunate for him and for us as a group.”

Mellon will also continue to be without striker Ishmael Miller who remains side-lined with a long-term hamstring injury.

Rovers could be bolstered, however, by the return of Zoumana Bakayogo, with the defender returning to training recently, but he’s not been fit enough to make a matchday squad just yet.

One to Watch – Ollie Banks 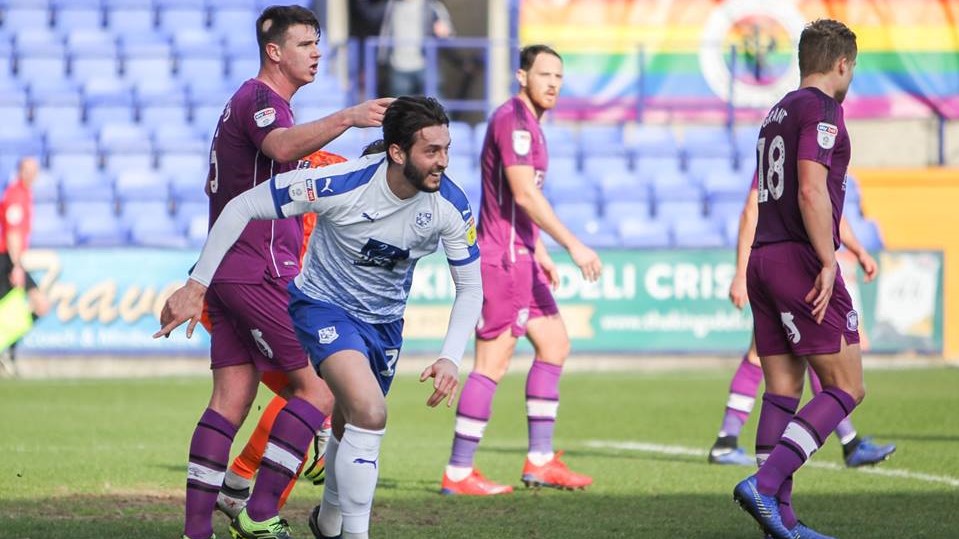 It’s quite easy for players to go under the radar when they play in a side where the talismanic striker writes the headlines at least every other week, but Ollie Banks has impressed from midfield and laid on a lot of those chances for hitman James Norwood.

Returning to the club as a summer addition on a free transfer, Banks has also chipped in with three goals from 30 appearances across all competitions – finding the net against Morecambe, Cheltenham Town and Carlisle United.

He also spent some time with the Super White Army last season and scored a goal on his eighth and final appearance during the loan spell against AFC Fylde. That makes it four goals from 38 appearances across the two spells.

A well-travelled 26-year old, Banks came through the youth ranks at Rotherham United – the town of his birth – and he scored on his professional debut with the Millers during a victory over Torquay United on 7th May 2011.

While with Rotherham, Banks had loan spells with Sheffield FC – the oldest football club in the world – Buxton and Stalybridge Celtic before then going on to ply his trade for Gainsborough Trinity, Scarborough Athletic, North Ferriby United and FC United of Manchester.

In September 2013, Banks moved to Chesterfield – then of League Two – which started a good run of spells in the Football League – going on to feature for Northampton Town, Oldham Athletic and Swindon Town before re-signing with Micky Mellon’s side in the summer. 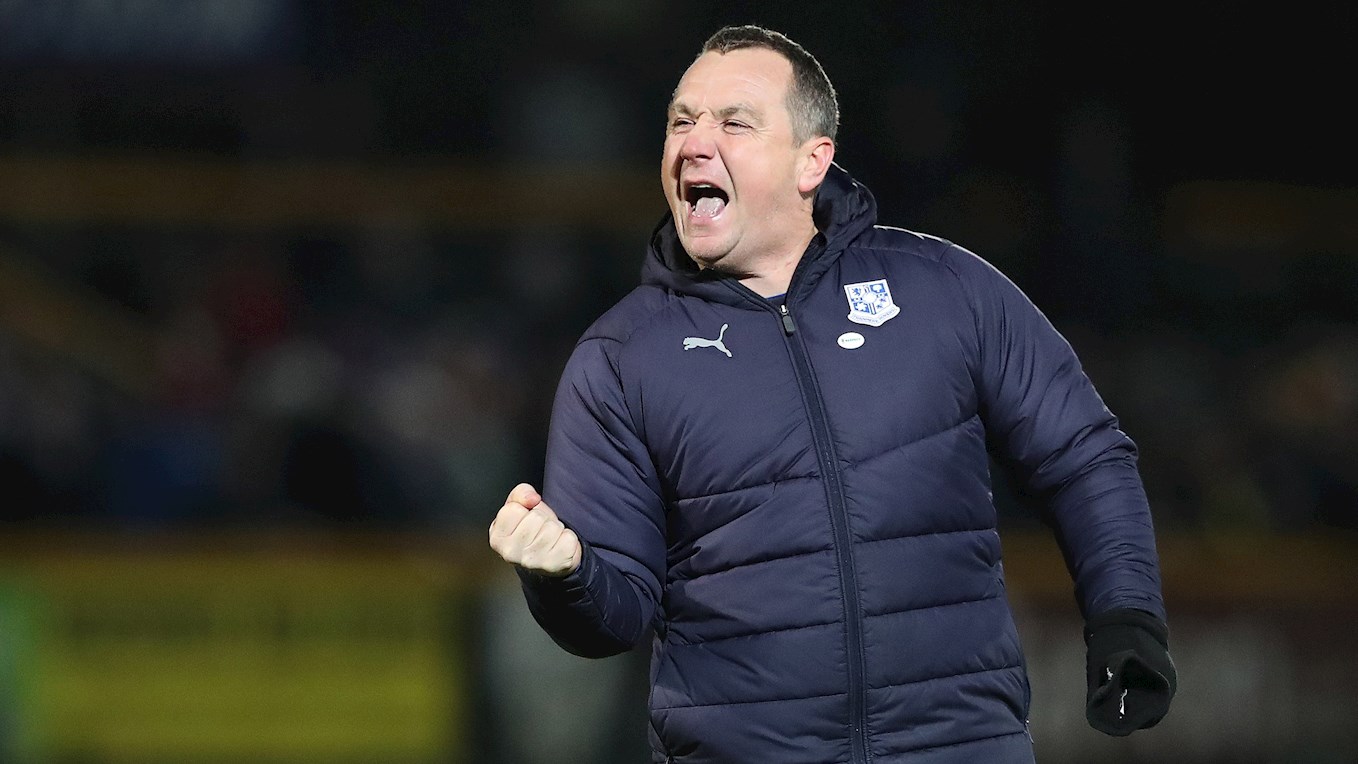 After a couple of years in the wilderness, Tranmere Rovers’ significant upturn in form has been directly linked with the appointment of former player Micky Mellon as manager.

Since joining on 6th October 2016, Mellon has led them to the National League play-off final twice, winning at the second attempt against Boreham Wood last season, and has put the side on the cusps of the League Two automatic promotion places this time around.

Mellon was mightily unlucky not to take Tranmere back into the Football League at the first time of asking and you can be sure that there won’t be many other times that 95 points isn’t enough to secure automatic promotion.

This is Mellon’s fourth managerial tenure and he’s been remarkably successful in the previous jobs.

A perennial promotion winner, Mellon took Fleetwood Town from the Conference North to League Two and also took Shrewsbury Town up into League One. He also had a short stint in charge of Barnsley. 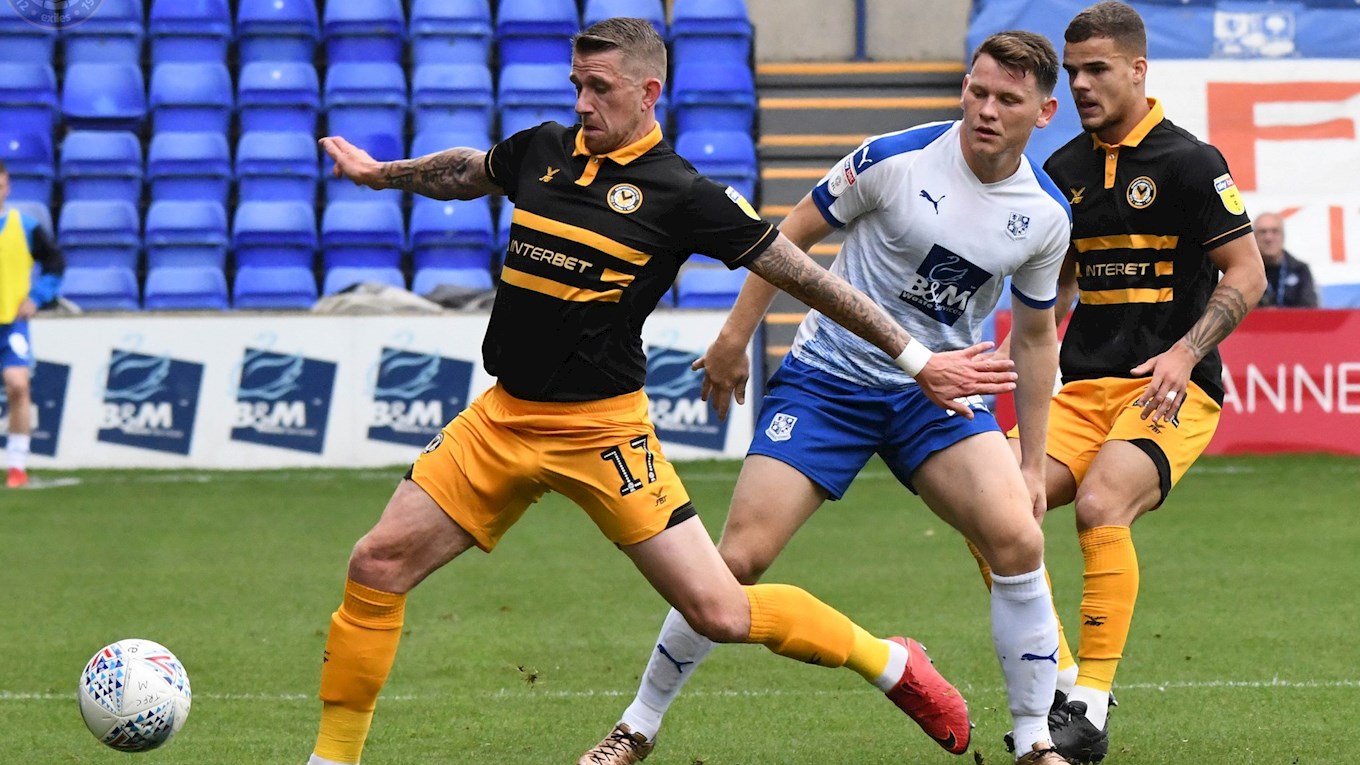 Newport County AFC celebrated goalkeeper Joe Day’s 200th appearance for the club with all three points after they won on the road for the third successive match in League Two with a 1-0 victory at Tranmere Rovers.

The Exiles were certainly out of the traps quickest against the newly promoted side and took the lead after just five minutes. Padraig Amond flicked-on Dan Butler’s delivery into the penalty area and Fraser Franks met it to fire into the bottom corner.

Antoine Semenyo and Mark O’Brien both came mightily close to doubling the lead, but Tranmere grew into the contest and had their greatest chance towards the end of the first-half.

Talisman James Norwood – who had already scored seven of his 29 goals this season before the visit from County – cleared the crossbar with a clever clipped effort in what is probably the only chance he’s missed this campaign.

In the second-half, more defensive resilience was required to secure all three points, Day tipping away Tranmere’s first shot on target during stoppage time when Larnell Cole went for the acrobatic.

Read what Mike Flynn and Joe Day thought of the contest. 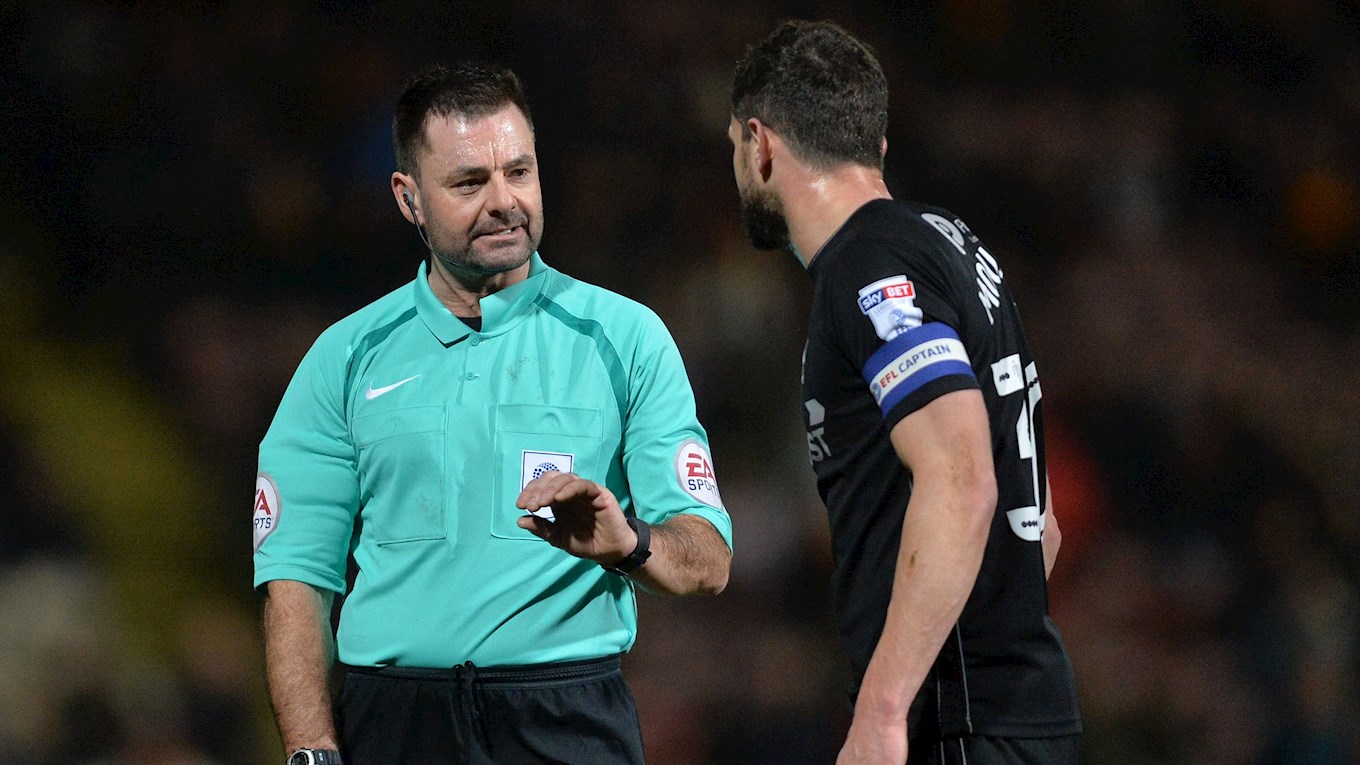 Ilderton is currently embarking on his 16th full season as a Football League referee having presided over his first League Two fixture on 10th August 2002 as Rochdale secured a narrow home victory over Leyton Orient.

He has taken charge of just 12 matches so far this season, giving out 30 yellow cards and two red cards, including three yellows on his first game of the season which came on 15th December as Carlisle United put four past Colchester United.

Only one fixture has passed this season without Ilderton going to his pocket – Bury FC’s comfortable home victory over Macclesfield Town on 2nd March.

His league high number of yellow cards for a solitary fixture this season stands at five, a figure given out twice – Burton Albion’s draw with Plymouth Argyle on 29th December and Notts County’s away victory at Carlisle United on 12th March.

Those statistics follow on from refereeing a total of 30 game across all competitions in the 2017/18 campaign, a season in which Ilderton gave out 85 yellow cards and seven red cards throughout the entirety of the campaign.

Ilderton has refereed a match involving Newport County AFC on two previous occasions in League Two and this will be his first visit to Rodney Parade. The Exiles have an excellent record in the previous matches, having taken four points from the two away matches.

He only presided over one County match last season and that came in just the second game of the campaign as the Exiles drew 1-1 up at Crewe Alexandra on 12th August 2017. Mark O’Brien and Mickey Demetriou were both booked, while Perry Ng was dismissed for the Railwaymen.

Ilderton also refereed the Exiles once during the ‘Great Escape’ season of 2016/17 and it came in the 1-0 away victory at Exeter City on 8th April 2017. Mark Randall and Darren Jones saw yellow cards brandished in their direction.

Other matches in League Two that day (All 3pm kick-offs)