Matthew Owen has provided an update on the club's commercial activity to date and our preparations for the 2021-22 season.

As we pass the midway stage of the current season, we felt like this was a good opportunity to provide an update on commercial activity to date. We also wanted to share with you our plans for the rest of the season and our preparations for the 21/22 campaign.

Maintenance and development of commercial revenue streams at the club have never been more important. These streams can broadly be broken down into four categories – kit sponsorships, matchday sponsorships, stadium sponsorships and player sponsorships.

This revenue stream is associated with all three EFL first-team kits. Kit sponsorships are made up of the front and back of the shirt, the back of the shorts and the sleeve sponsor. This season all EFL kit has been sponsored.

Fortunately, we have done well in cup competitions this season. The FA Cup and Carabao Cup games both received additional sponsorship.

To reiterate, all kit sponsorship for our home, away and third first-team kits have been sponsored for league and cup competitions in the 20/21 campaign.

Preparations are already underway for the 21/22 campaign. We have produced documents for the sponsorship of the front of our first team shirt and are speaking with potential sponsors about this.

Of the upcoming twelve EFL League 2 matches seven have already been sponsored and the following five are available:

If you are interested or know of anybody who may be in matchday sponsorships, please get in touch.

Revenue generated from stadium sponsorships is shared across the four stands at Rodney Parade – the south stand, north terrace, Compeed and Bisley.

The South Stand is sponsored by Pure Vans this season. Planning is underway for the sponsorship of the stand during the 21/22 campaign.

Next season the south stand will be made up of 12 20ft x 2ft 7” boards sharing the branding, website, contact information and social media handles of the sponsor.

Please get in touch if you are interested in finding out more about sponsoring the South Stand next season.

This season the North terrace is sponsored by GMB. Planning is also underway for the sponsorship of this stand in the 21/22 campaign.

Next season the North Terrace will be made up of 10 20ft x 2ft 7” boards. These boards will also display the branding, website, contact information and social media handles of the sponsor.

Please get in touch if you are interested in finding out more about sponsoring the North terrace next season.

For the 21/22 campaign, we are preparing a complete overhaul of the Compeed stand to increase the amount of commercial revenue coming into the club.

The stand features a pitch length LED advertising board. We still have some LED advertising minutes available for the current season. Planning is underway on how the LED boards will appear next season.

The stand also consists of 36, 10ft x 2ft 7” boards, this season we still have several boards available to sponsor on the stand. Next season these boards will be coupled up so that branding will be printed across 15, 20ft x 2ft 7” boards. These gantry-facing boards will display the sponsors branding, website, contact information and social media handles.

We plan to reconfigure how the Bisley Stand looks on matchday.

The North terrace and the South stand have both been sponsored for the current season. We still have some LED minutes and perimeter boards available. If you would like to find out more about the available inventory please, get in touch.

Planning with a local printing company is already underway for all four stands at Rodney Parade in anticipation of the 21/22 campaign. We are ready to start talking with potential sponsors about stand sponsorship LED advertising minutes and perimeter advertising boards.

This revenue stream refers to the sponsorship of individual first-team players EFL home, away and third shirts. Sponsors will be recognised throughout the season with a feature in matchday programs as well as receiving their sponsored match worn shirt at the end of the campaign.

There are still opportunities to get involved in player sponsorship for the 20/21 campaign. There are a number of players still available to sponsor please get in touch to find out more.

We are looking at better ways of recognising those who take part in player sponsorship next season. We want to acknowledge our sponsors in new ways such as sharing sponsorship on social media and during match day announcements.

What else to look out for

We are looking at new ways of developing commercial revenue streams.

Some of those under consideration are:

Commercial revenue for our football club is paramount. Increasing the commercial revenue into the club gives the Manager more flexibility in the transfer market. Your help is important, and we still have opportunities for people and companies to get involved in the 20/21 campaign.

As outlined, we are working on opportunities for our 21/22 campaign and the front of shirt sponsorship is important. We are ready to have conversations about the front of shirt sponsorships and other opportunities at Rodney Parade next season. We are also working on other ways to recognise our sponsors. We are working on a sponsorship gallery that will allow you to find out more about our sponsors such as what they offer, where to find them and how long they have been a sponsor at Newport County AFC.

To get involved or for any additional commercial information, please email matthew.owen@newport-county.co.uk or contact 01633 302012. You can also keep up to date on by following us @comm_ncafc on Twitter and Instagram or by searching “Newport County AFC – Commercial” on Facebook.


The results from this week's County Lottery draw. 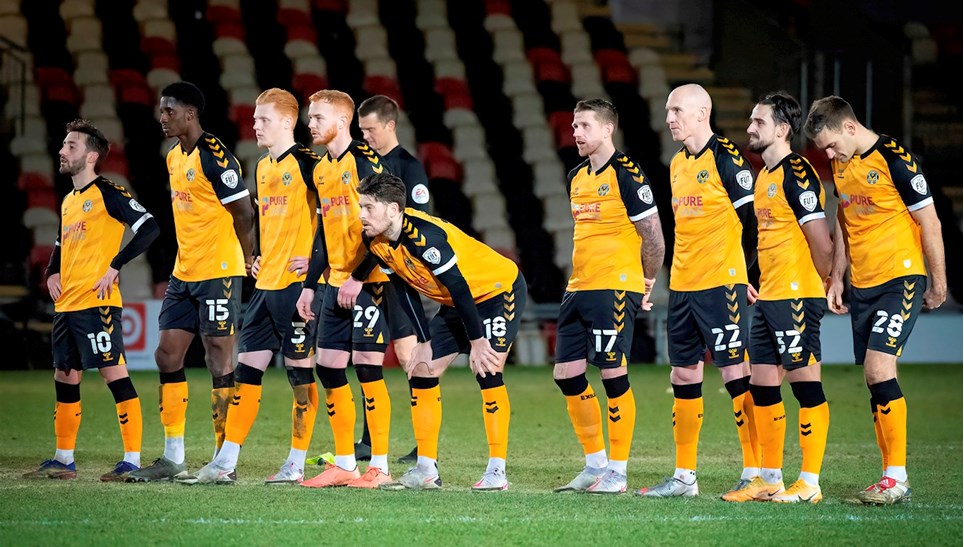 
Newport County AFC are excited to announce there is now an opportunity available for supporters to bid on eBay for match-worn shirts from the club’s FA Cup clash against Brighton & Hove Albion.


Your chance to WIN one of these amazing prizes, courtesy of Sky Bet EFL Rewards: