It's been described as the most stable transfer window for some time at Newport County AFC. With players contracts extending beyond the end of the final day of last season and some of last season's Great Escape heroes looking to continue momentum into the 2017/18 Season, Mike Flynn has managed to retain a strong core of players which has been added to throughout the Summer. With a quiet #DeadlineDay at the Club, here's the Round-Up of this Summer's activities. 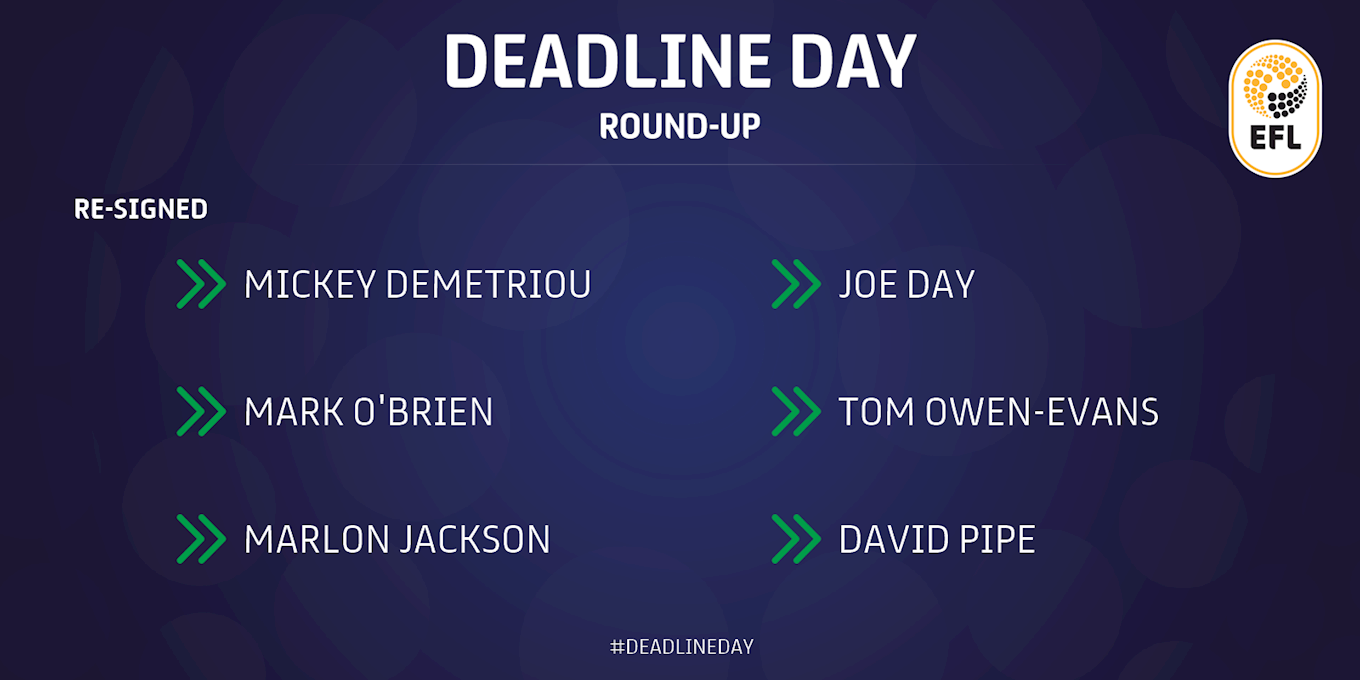 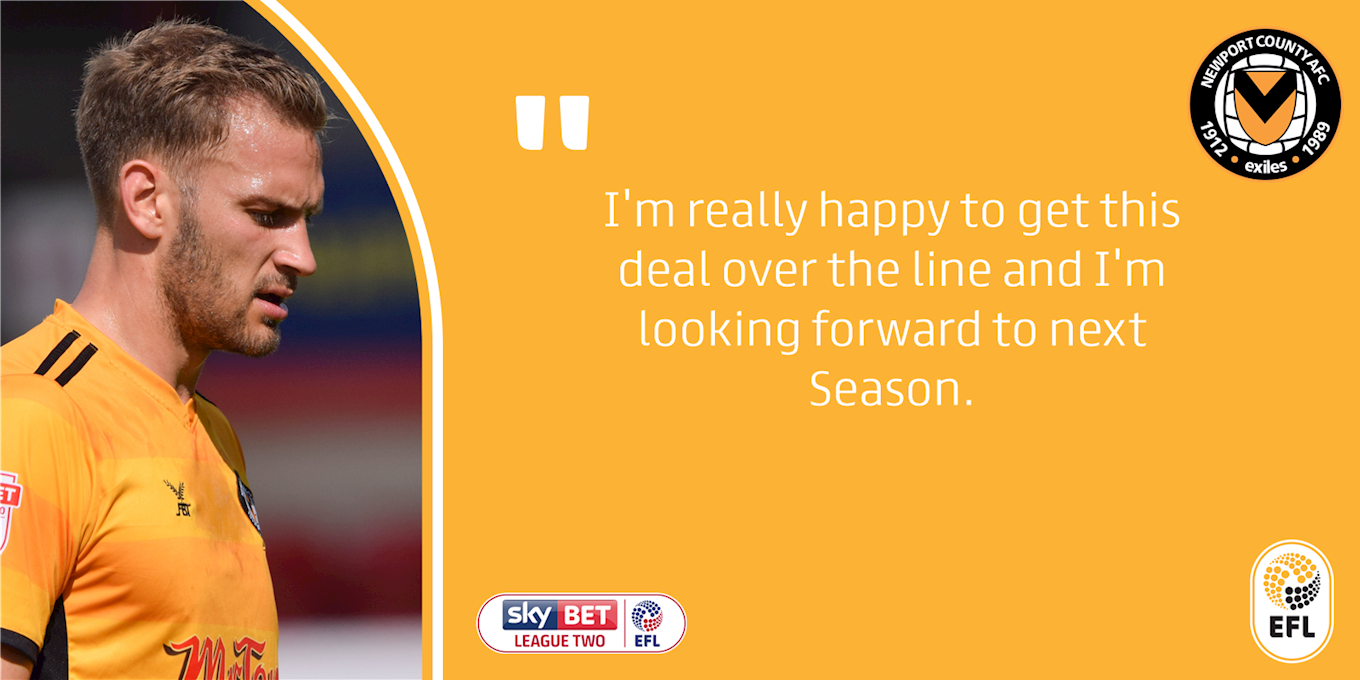 Crucial to the Exiles ‘Great Escape,’ Demetriou scored four goals in the final seven games of the season.

This season, he has already added to his tally, with a 30-yard thunderbolt at Stevenage.

On signing his two-year deal, Mickey said: “We ended the season well so hopefully we can start afresh now whilst building on what we did towards the end of last season.” 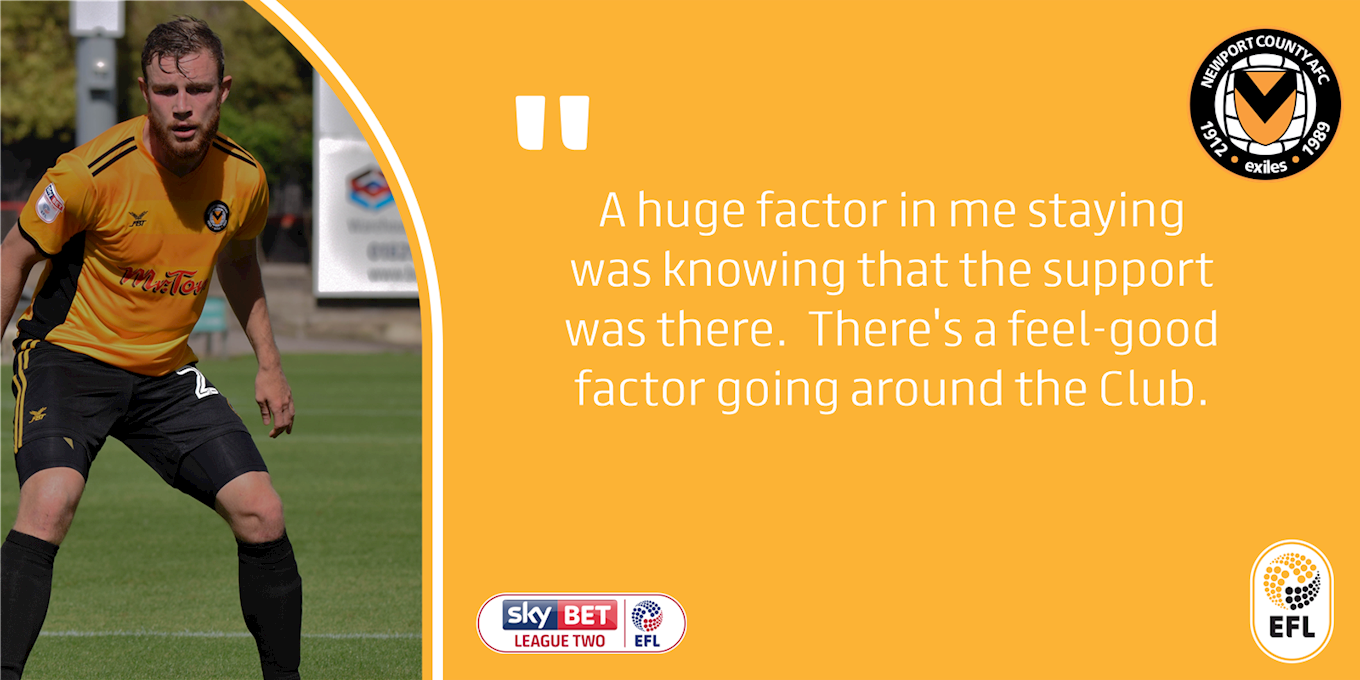 Another critical member of the ‘Great Escape’ squad, O’Brien scored the crucial 89th minute winner that kept the Exiles in League 2.

A rock at the back since joining the club on loan in January, O’Brien also penned a two-year deal and has made five appearances so far this campaign.

On signing that deal, he commented: “A huge factor in me staying was knowing that the support was there. There’s a feel good factor going around the club.” 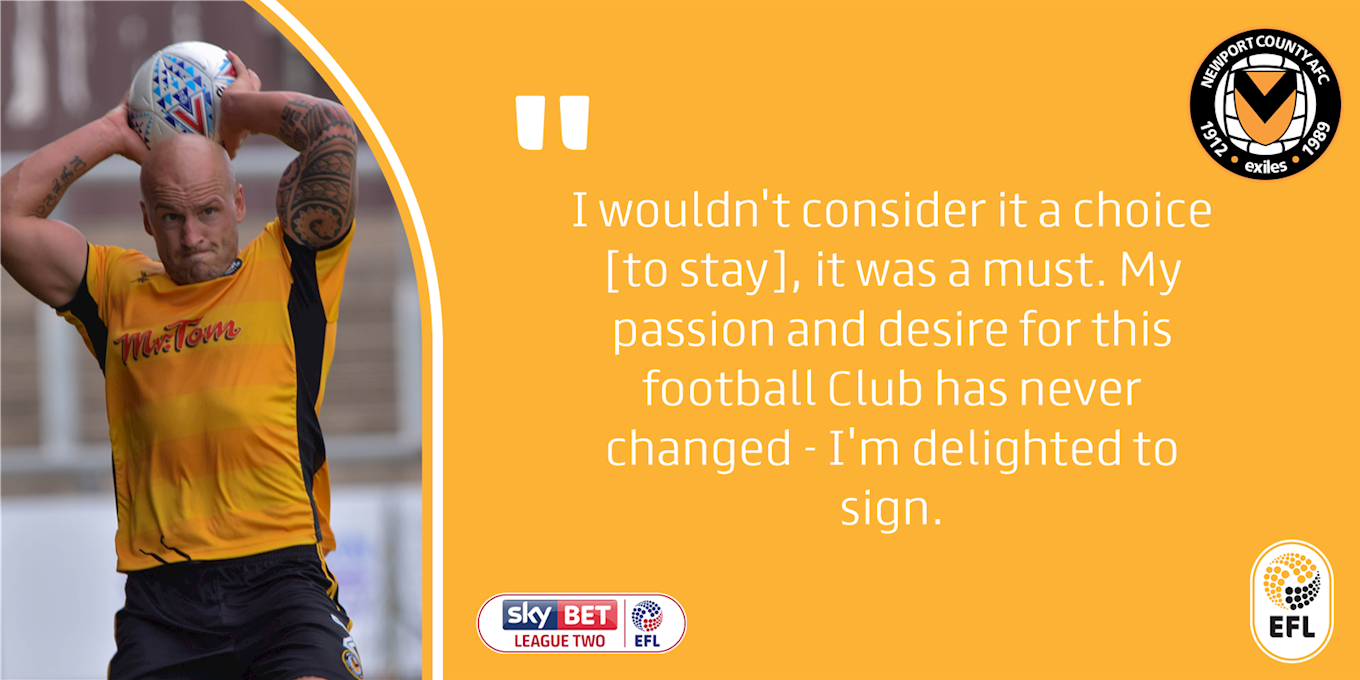 Pipe signed a one-year deal when making his loan from Eastleigh permanent.

That means he has signed permanently for the Exiles for the second time, after making over 100 appearances the first time around, captaining the side to promotion in 2013.

On signing the deal, Pipe said: “I wouldn’t even consider it a choice [to stay], it was a must. My passion and desire for this football club has never changed and I’m delighted to sign." 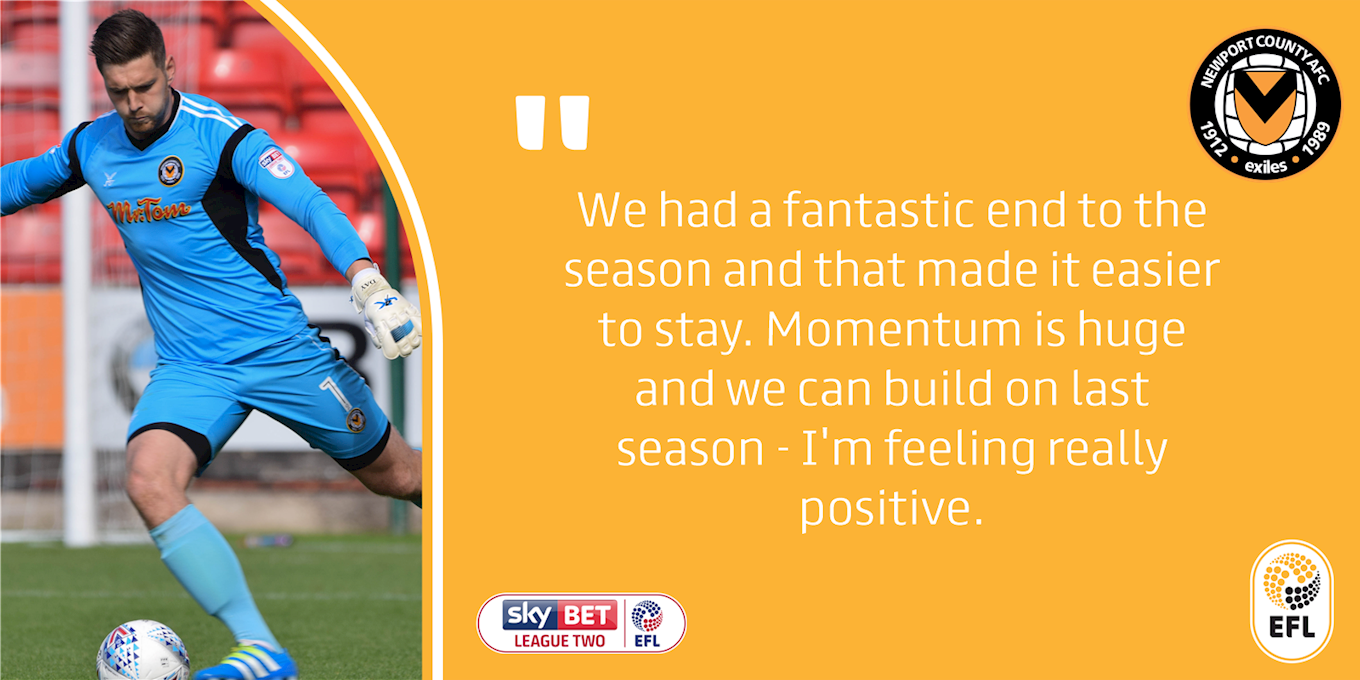 The goalkeeper has made 108 appearances for the club, and said on signing the new deal: “We had a fantastic end to the season and that made it easier for me to stay. A two-year-deal suits everyone and I’m excited to get into next season.” 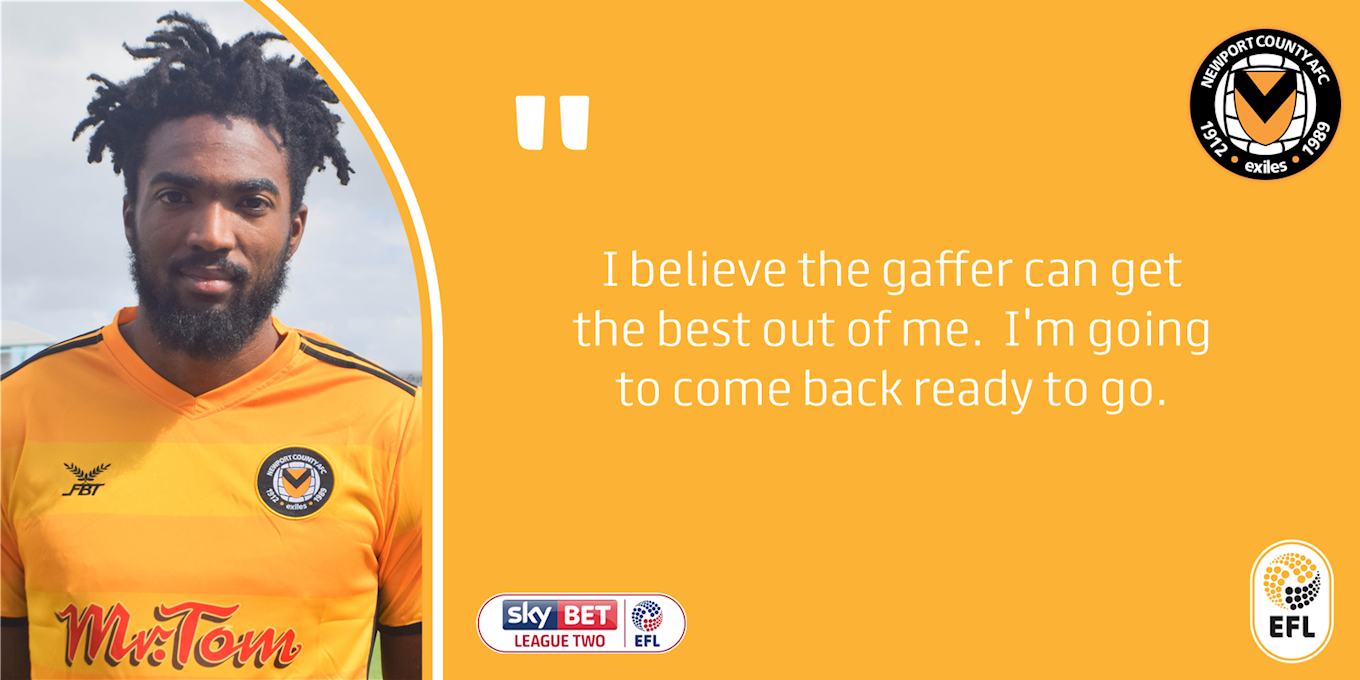 Jackson signed a new one-year deal this summer, after an impressive first season with the club, scoring in the EFL Cup defeat to MK Dons.

Injury has so far prevented Jackson from appearing for County this season, although he is nearing a return.

When signing the new deal, Marlon said: “It was play-off form towards the end of the season, if not promotion so we have to keep going. If we do keep it going, then it’s a big boost. I believe the gaffer can get the best out of me and I’m going to come back next season ready to go.” 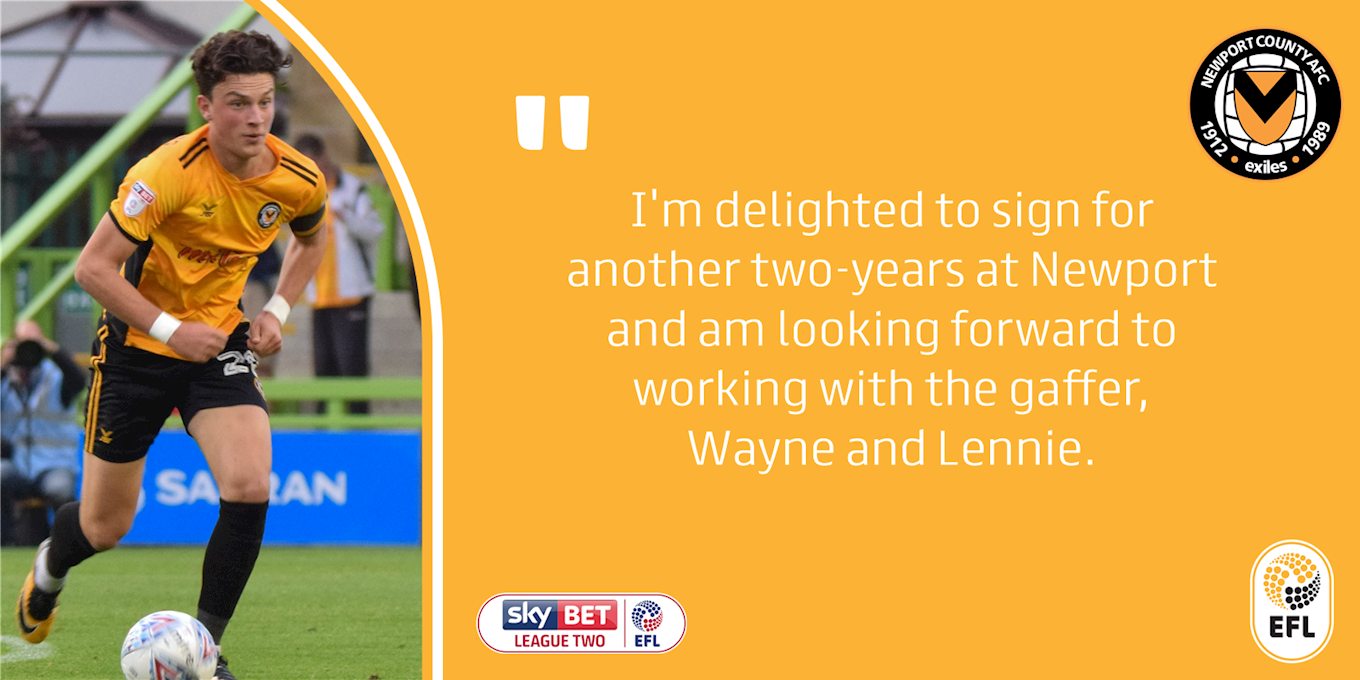 Owen-Evans made a critical contribution to the club’s ‘Great Escape,’ netting the winner against Exeter City in early April.

Since making his debut in 2015, Tom is on the verge of making his 50th appearance at the club and could do that against Exeter this weekend.

When agreeing the new two-year deal, Tom commented: “I am delighted to sign for another two years at Newport County. After a great end to the 2016/17 season, I believe we now have the momentum to have a really successful year next year.” 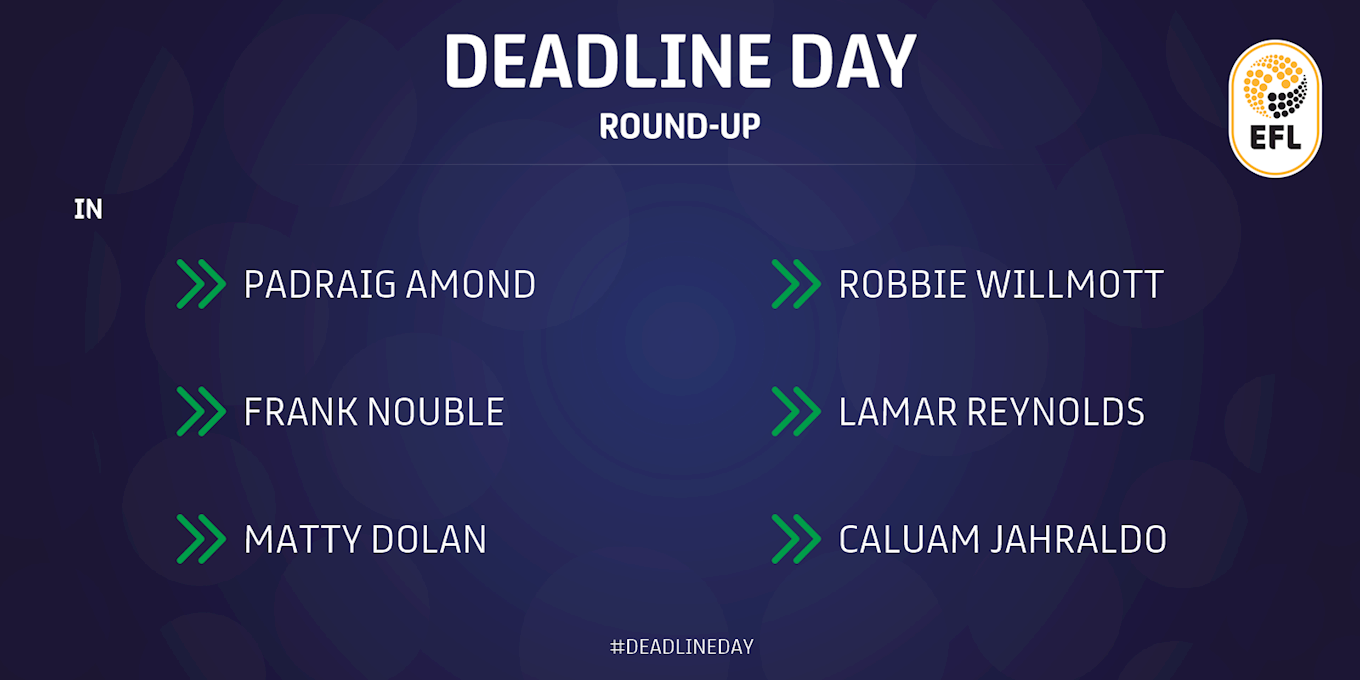 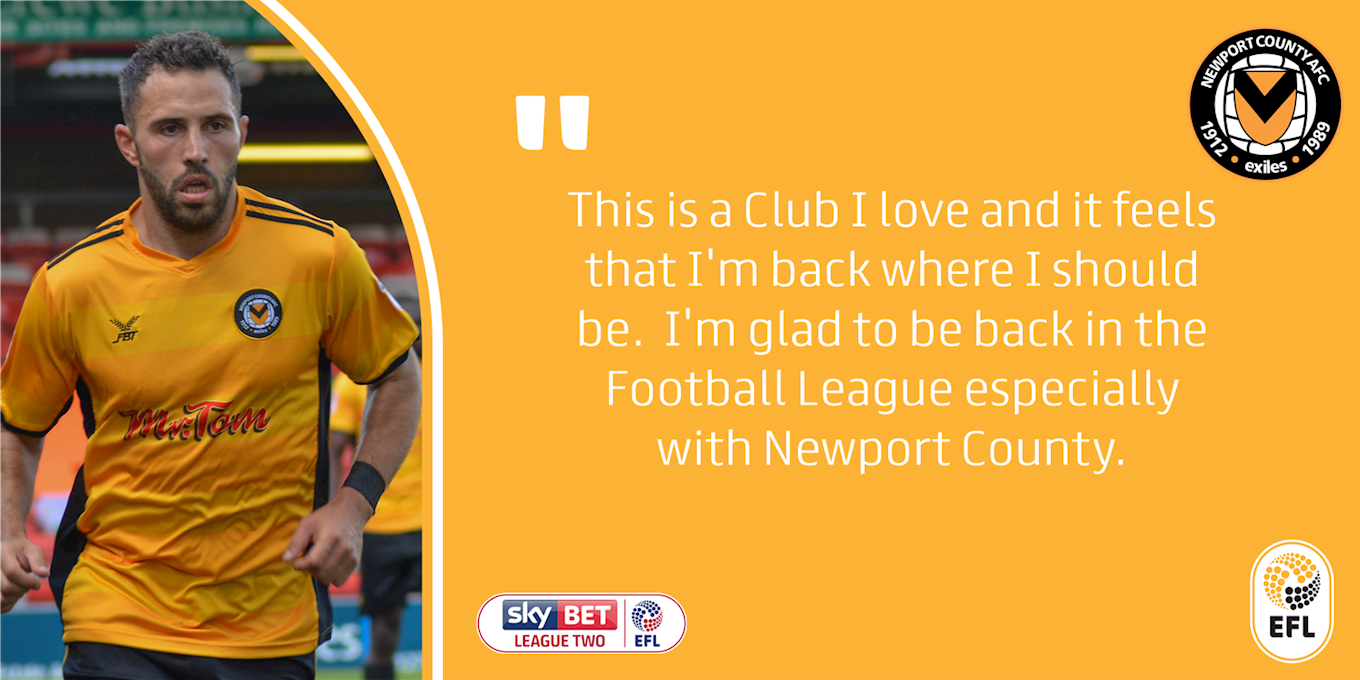 The first face through the door in preparation for the 2017/18 season was a familiar one, as Robbie Willmott re-joined the Exiles on a two-year-deal.

In his first spell, Willmott made 81 appearances for the club, scoring 10 goals, including a double on his debut.

Since re-joining, he is the only player to start every game this season as he looks to build on his impressive County career, being part of the promotion winning side in 2013.

When signing for the club this summer, Robbie said: “This is a club I love and it feels like I’m back where I should be. I’m glad to be back in the Football League, especially as it is with Newport County.”

The second person to sign with the club was Yeovil Town midfielder Matty Dolan, who also joined the club on a two-year deal.

Matty has already made six appearances with the club, starting from the off in each of those games.

On joining the club, Matty said: “The manager’s enthusiasm and ambition is really exciting and I’m looking forward to the upcoming season as we look to make it a really positive one for Newport County.” 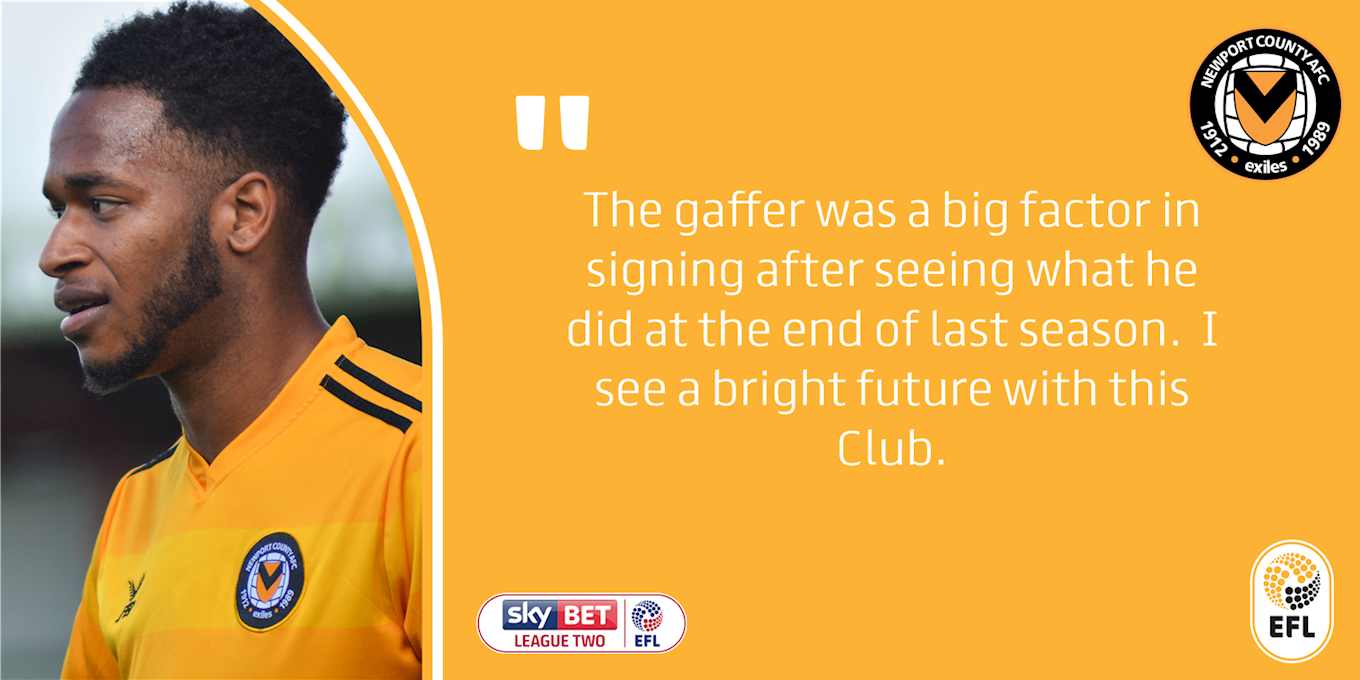 Another player to join the club on a two-year deal, Reynolds was a product of the Jamie Vardy V9 academy.

That came after an impressive spell with Brentwood, where 28 goals in 36 games saw him win the player of the year award.

Reynolds has been involved in five games already with the Exiles and said when signing: “I’m delighted to have signed for Newport County AFC. The gaffer was a big factor in signing after seeing what he did at the end of last season. I see a bright future for me with this club.” 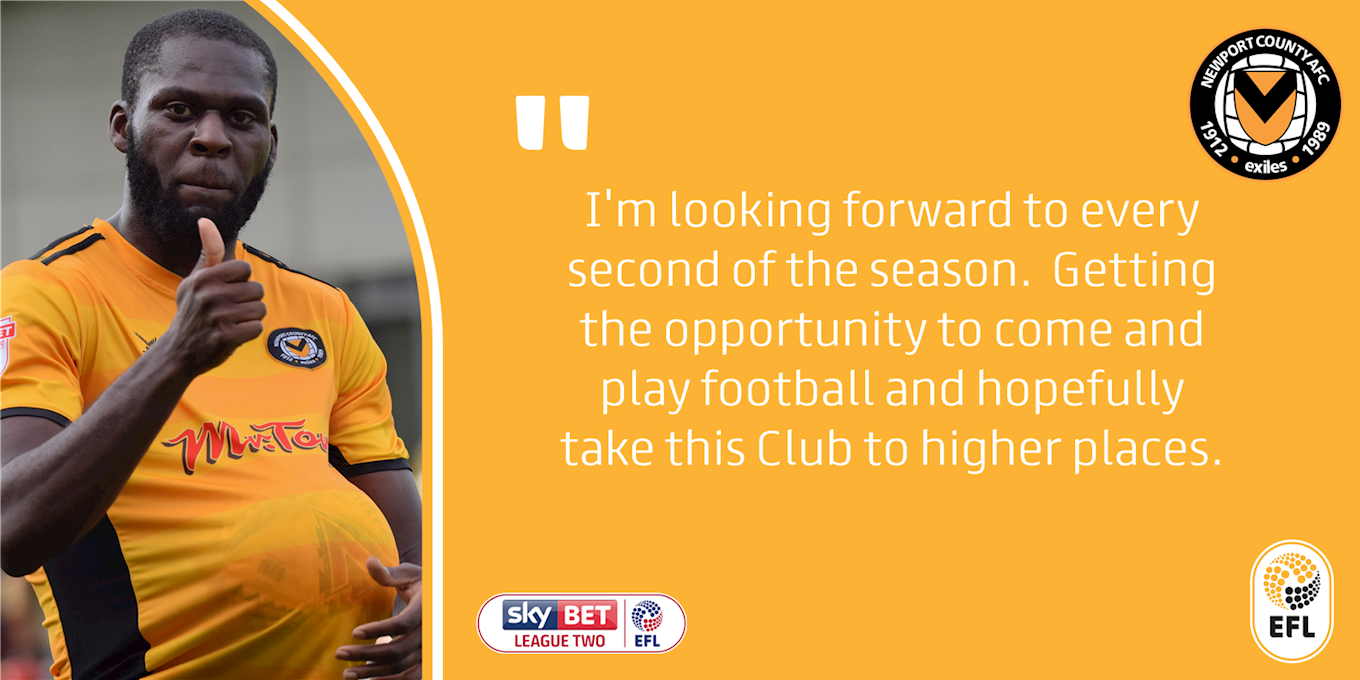 Another striker followed Reynolds through the door at County, as Frank Nouble signed a one-year deal with the Exiles just a day later.

And Nouble has settled perfectly into proceedings, with five league goals already this term, leaving him joint top scorer with Luton’s James Collins.

On signing for the club, Nouble said: “I’m looking forward to every minute and second of the season and getting the opportunity to come and play some football and hopefully take this club to higher places.” 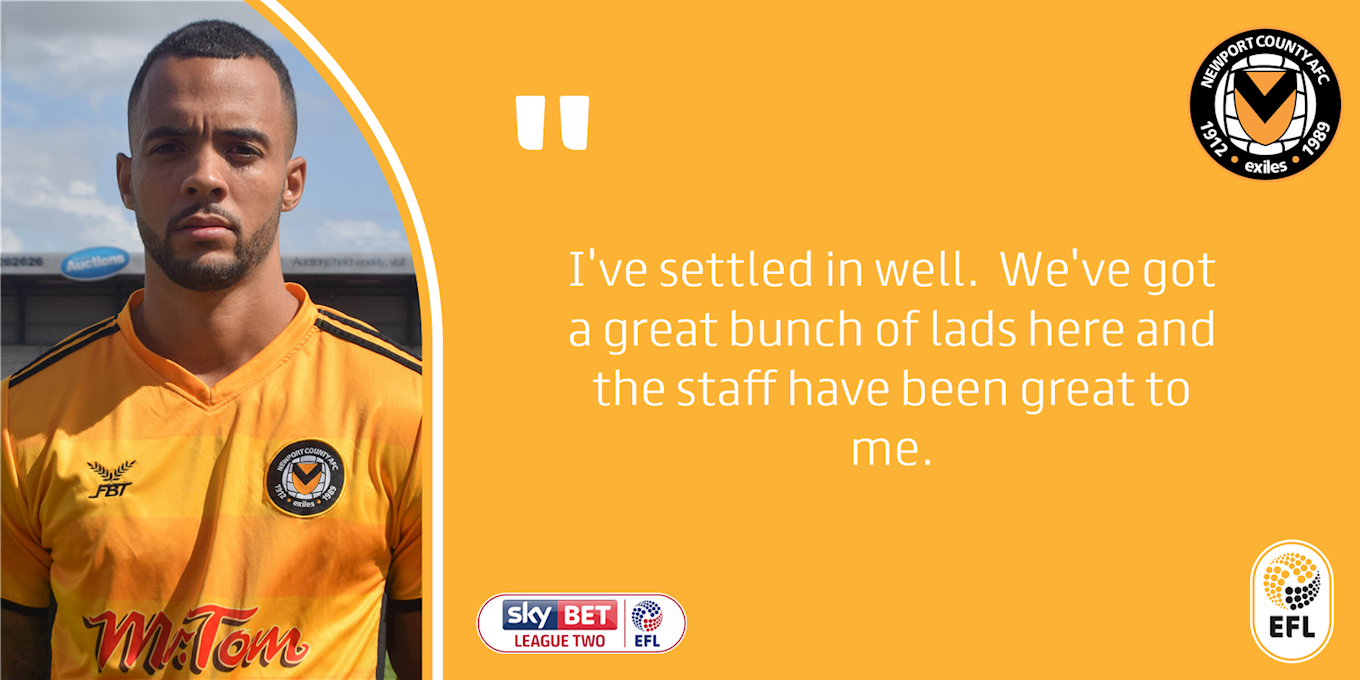 Jahraldo signed a one-year deal with the Exiles after impressing Mike Flynn whilst on a pre-season trial.

He made his first competitive start on Tuesday at Forest Green, with a further two appearances coming from the bench.

On securing the services of Jahraldo, Flynn said: "Calaum deserves this contract.  He's been on trial at the club for a month and has done everything in the right way since being here. Calaum will add pace, energy and competition at left back." 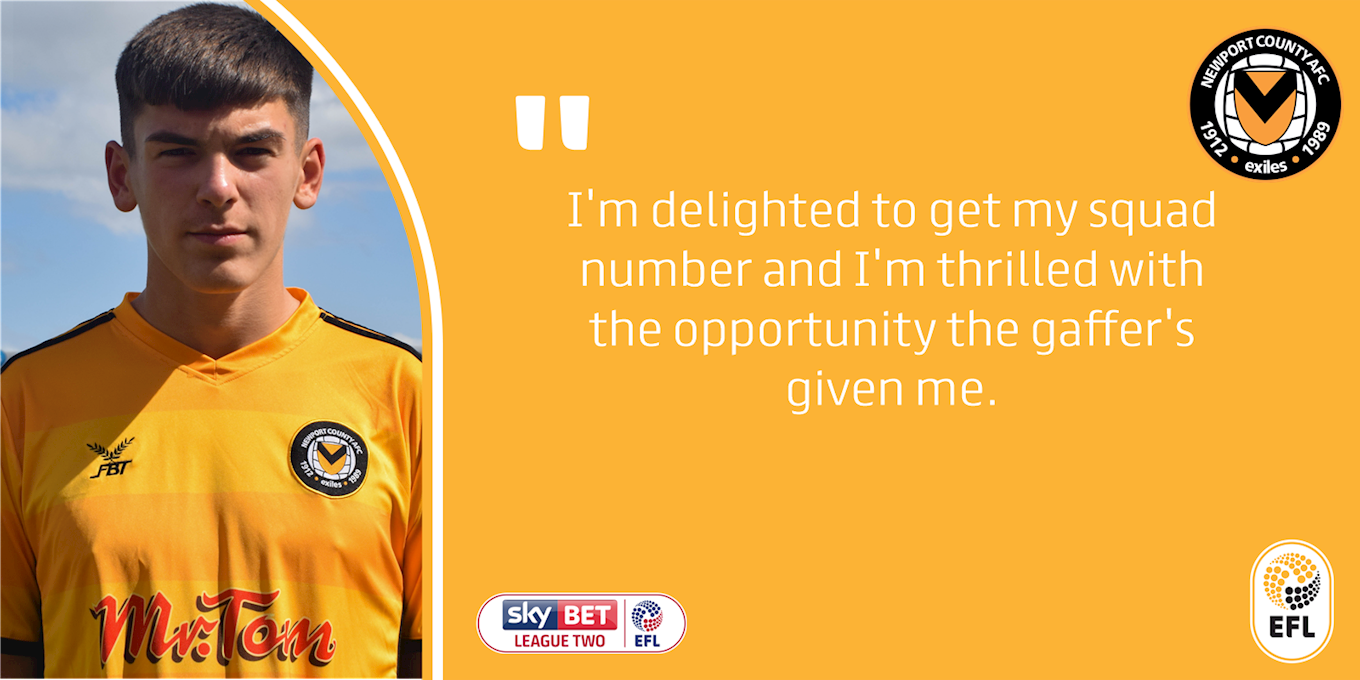 Academy scholar Jay Foulston has been given a squad number after impressing in pre-season.

Although yet to make a competitive appearance, Foulston provides even more depth to the defensive options.

On completing the move to the first-team, Foulston commented: “I'm just looking to the future now, I'm delighted to get my squad number and thrilled with the opportunity the gaffer's given me.  The aim is always to play as a pro and if I can do it here that would be an amazing feeling." 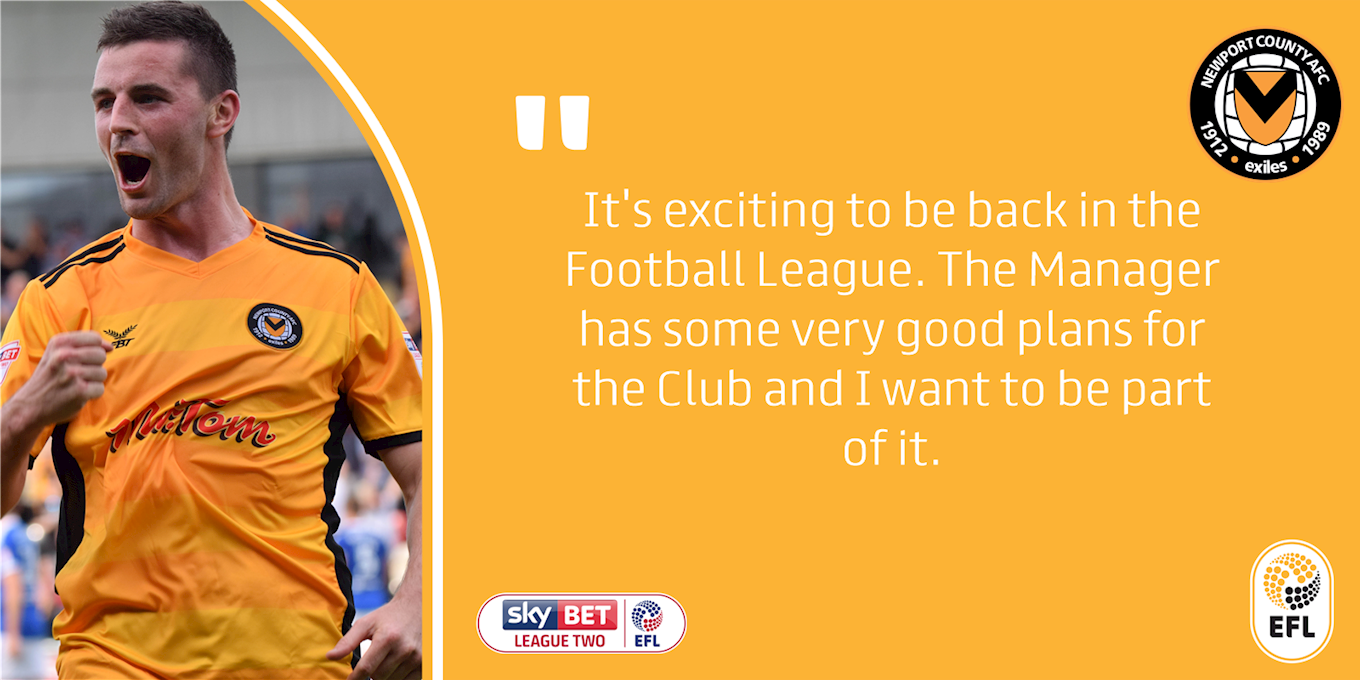 Amond was the final player to join County during the 2017 summer transfer window, when joining the club for an undisclosed fee from Hartlepool United. He has also signed a two-year deal.

The 29-year-old boasts an impressive scoring record in League Two, with 45 goals in his previous 90 games.

And he went to add to that tally with a debut goal in the Homecoming victory against Chesterfield, registering his first assist for the club in that game.

On completing the deal last-week, Amond said: “It’s an exciting thing for me to be back in the Football League.  Speaking to the manager, he has some very good plans for the club and I want to be part of it.” 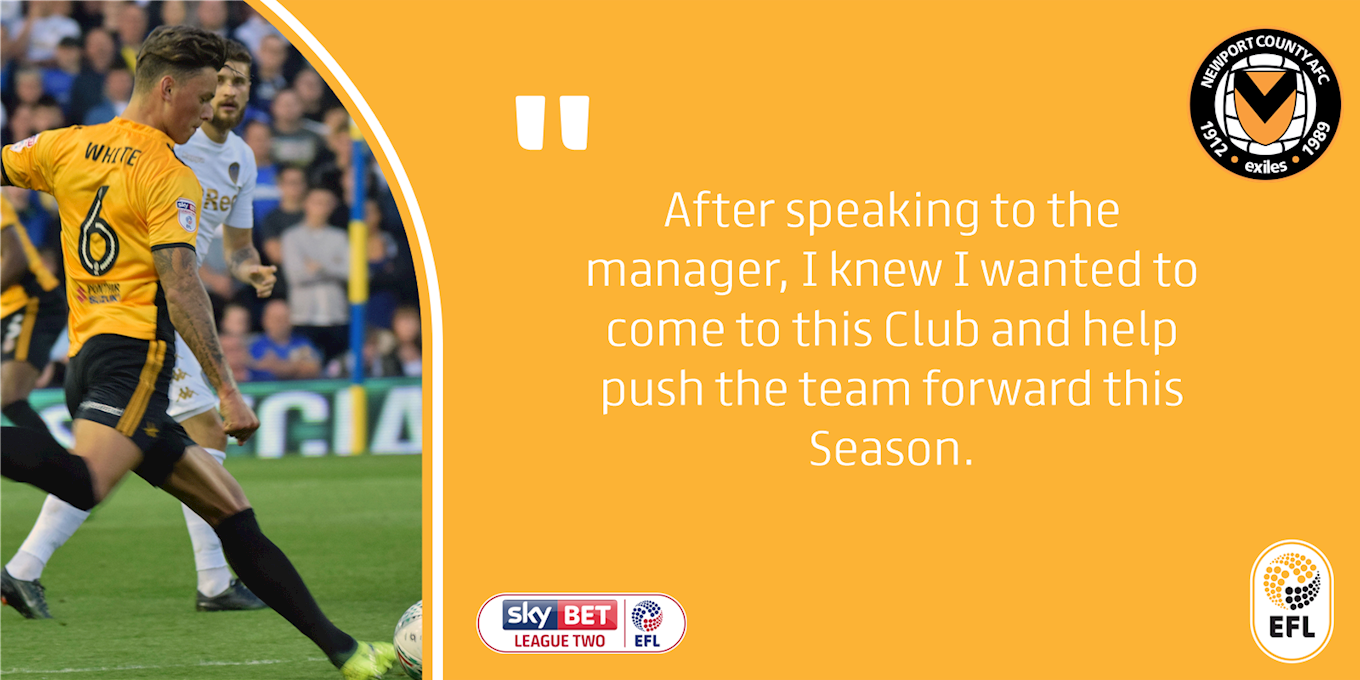 White has joined the club on a season-long loan from Premiership new boys Brighton & Hove Albion.

And White has settled perfectly to life at the club, providing a useful option at both centre-back and left-back.

He has made five appearances so far for the Exiles, making an assist for Reece Cole’s goal at Coventry.

When joining the club, White said: “After speaking to the manager, I knew that I wanted to come to this Club and help push the team forward this season.” 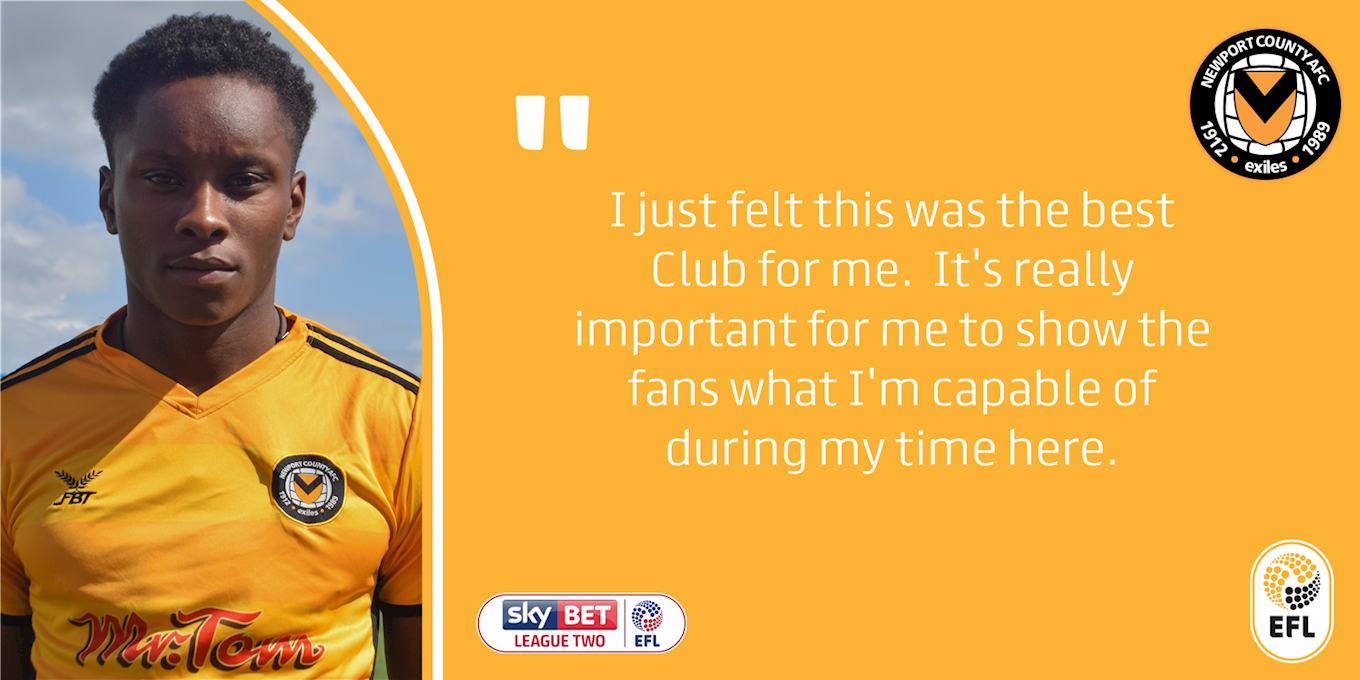 Striker McCoulsky joined the Exiles on loan until January from Bristol City.

And he has had a huge impact at the club, scoring three goals, the first a 94th minute equalizer on his debut at Stevenage.

His double then saw the Exiles past Southend in the Carabao Cup, and McCoulsky said about joining: “I spoke with the manager and I just felt that this was the best club for me. It’s really important for me to show the fans what I am capable of during my time here.” 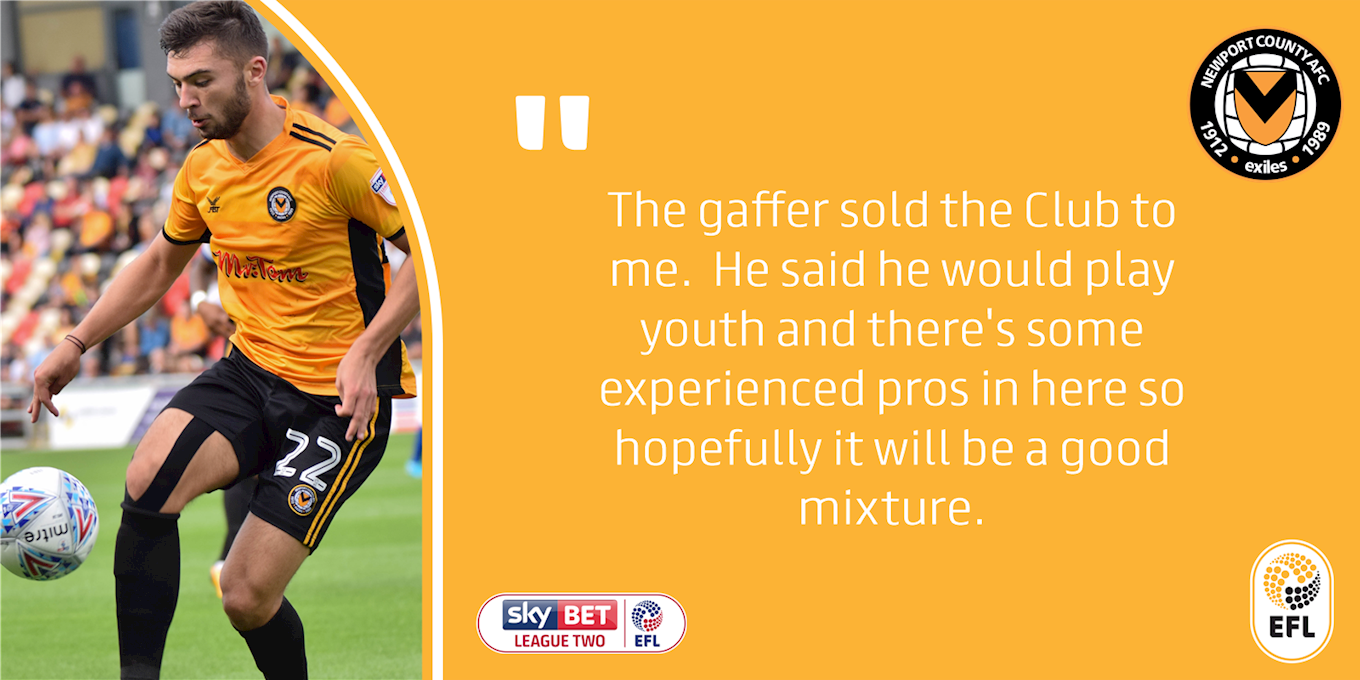 Another loan signing until January, midfielder Cole joined the Exiles from Brentford.

And he also grabbed a debut goal, netting the winner at Coventry.

On signing for the club, Cole commented: “The gaffer really sold Newport County AFC to me.  He said he was going to be playing youth and there's obviously a few experienced pro's in here as well so hopefully it will be a good mixture." 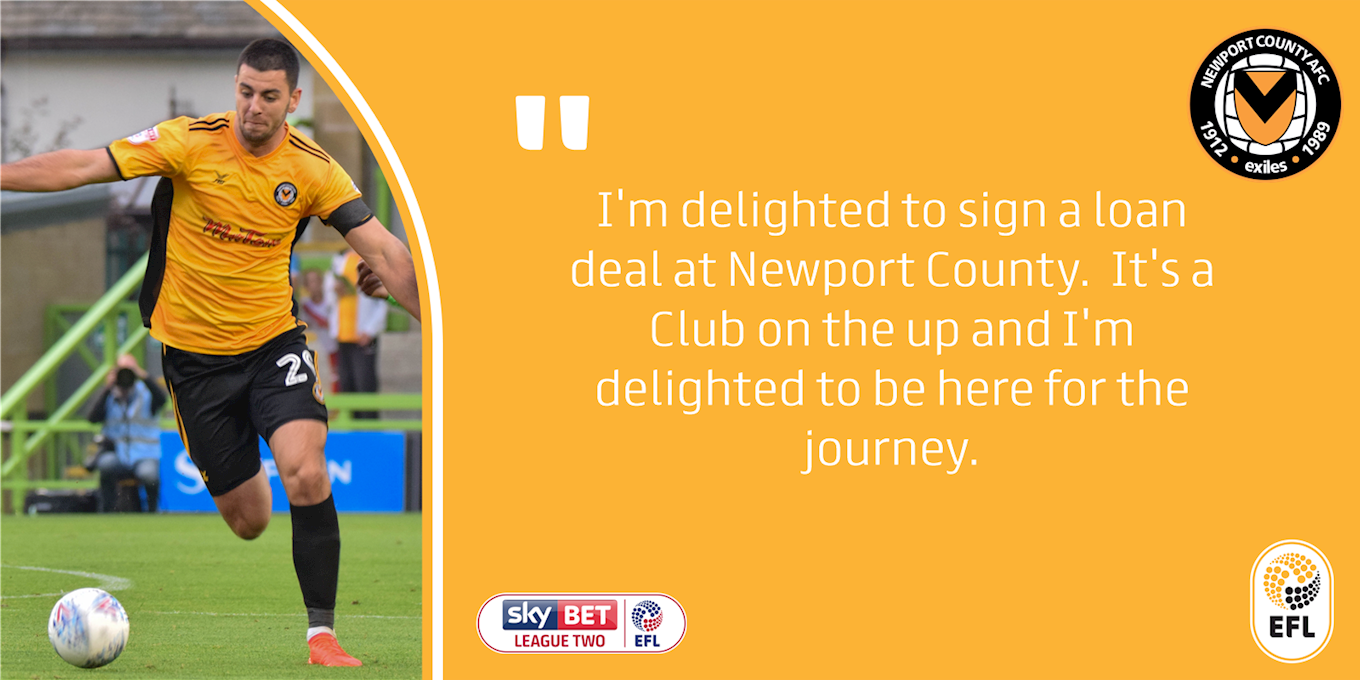 Quigley is a further loan signing until January, having joined the club from AFC Bournemouth.

The striker has made two appearances since joining and said about the move: “I’m delighted to sign a loan deal at Newport County. It’s a club on the up and I’m delighted to be here for the journey.”

Touray was one of the stars of last season’s undefeated U18’s academy side.

That saw Touray invited to play for the first-team in pre-season, as-well as being part of the travelling squad for the opening league matches.

He has joined Merthyr Town on a three-month loan to continue his development, with Martyrs boss Gavin Williams saying: “We were impressed with Momodou during our pre-season friendly, and we look forward to working with him.”

Williams has joined National League North side Brackley Town on loan until January, contributing to an assist already.

Last season, Williams scored three goals on the way to the ‘Great Escape,’ with strikes against Hartlepool, Morecambe and Plymouth.

Boreham Wood FC in the National League was Turley’s destination, making a season long loan move to the club.

Turley joined County at the beginning of last season, although injury brought his season to a premature end. He did, however, score a crucial goal in the 1-0 victory at Leyton Orient.

The following list contains all the players that left the club in the 2017 summer transfer window, as well as the clubs they have moved to. The Club would like to wish all these players the very best of luck with their future endeavours.