Carlisle United head to Rodney Parade on Saturday in what is the longest trip to South Wales for any side this season. They are looking to improve on their play-off finish last year, where they were knocked out in the semi-finals by Exeter City in the 90th minute of the second leg.

Carlisle head to Rodney Parade in good form having picked up nine points from the last 18 available, following two wins, three draws and a defeat from the last six games.

A 1-1 draw with joint league-leaders Notts County starts that run, Hallam Hope scoring for the Cumbrians at Brunton Park to take a share of the spoils.

Another draw follows that result, this time 2-2 at Chesterfield. After falling behind early in the contest, goals from Danny Grainger and Richie Bennett had seemingly turned the tie on it’s head. But an 84th minute equaliser ensured this game was also drawn.

Grainger added another two to his season tally, while Hope and Shaun Miller completed the routine victory.

That quickly became back-to-back wins for Carlisle as they secured a 1-0 victory at Grimsby. Ex-QPR man Clint Hill scored the winner with 20 minutes to go and has recently signed a new contract extension with the club.

Carlisle’s unbeaten run came to end in their next match, however, with a 3-0 defeat at Luton Town.

In their last league match before the Emirates FA Cup break, the Cumbrians dropped to 14th after being held to a 1-1 draw with Morecambe.

Kelvin Etuhu netted his first goal for the club, only to be pegged back late-on at home. And they may have lost the game as-well, only for Adam Campbell to smack his late penalty off the crossbar and spare their blushes. 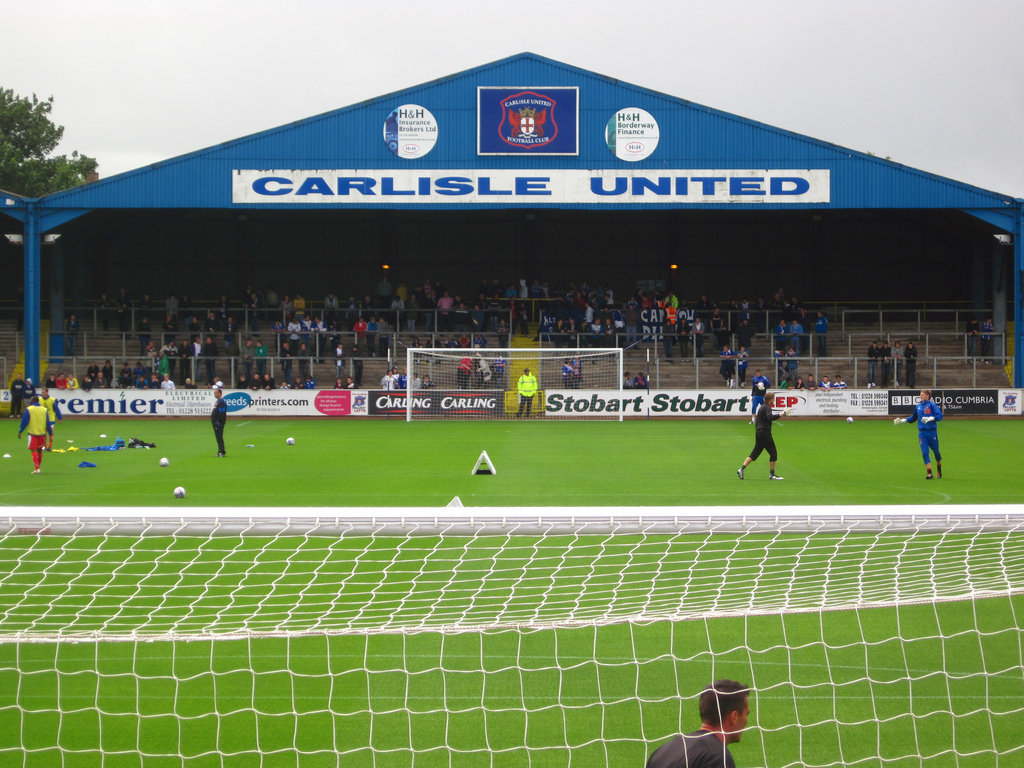 The Cumbrians have a few injury concerns ahead of this fixture.

Nicky Adams will definitely be unavailable at Rodney Parade, as he is facing the prospect of being out of action for the season following a knee injury last month.

Midfielder Jason Kennedy is expected to undergo surgery to try to rectify a back complaint and as such is not expected to play in any capacity.

A rib injury forced left-back Danny Grainger to exit the field with 20 minutes to go in the cup tie with Gillingham, and he will be assessed ahead of the match.

For that clash with the Gills, manager Keith Curle made one change to his side from the team that drew with Morecambe the previous week.

That allowed Curle to play an extra defender against the League 1 side, as Tom Parkes came in for Hallam Hope.

One to watch – Hallam Hope 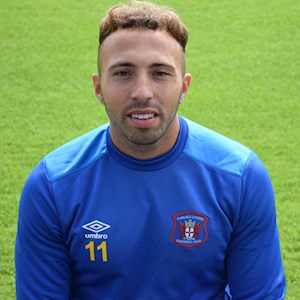 Currently Carlisle’s joint top scorer with Danny Grainger, Hallam Hope has made a good start to the season and has scored seven goals so far this campaign.

Three of those goals have come on the road – at Crewe, Morecambe and the match winner in a narrow 1-0 victory over Crawley Town.

Further strikes have come against Mansfield, Notts County, Yeovil and in the Emirates FA Cup against Oldham, in what is already Hope’s best goal scoring return for a season.

The 23-year old joined the Cumbrians over the summer on a free, although did have a loan with the club in the 2015/16 season.

He got five goals over that loan, taking his tally with the club to 12, in what is really the first club that he has settled with.

The striker joined the Everton Academy in 2005 from the Manchester City youth setup and signed schoolboy terms in 2010. Hope signed another contract three years later as a professional but couldn’t break into the first team fold at Goodison Park.

Hope had three loan spells away from the club before his departure, including scoring his first professional goal against County on his debut for Northampton Town.

That was his only goal, however, during that particular loan spell and he couldn’t find the target with Sheffield Wednesday in the Championship either.

Five goals on loan with Bury enticed them to purchase his services for an undisclosed fee in January 2014, although he would only score eleven goals from 79 appearances. 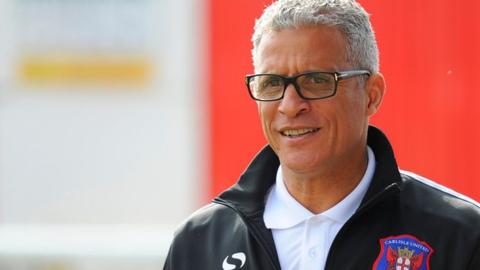 Keith Curle has been in the dugout with the Brunton Park outfit since 19th September 2014 following the dismissal of Graham Kavanagh and an interim spell by Tony Caig.

He has managed 178 games to date and has a current win rate of 38.2%. That means he has won 68 of his previous matches, whilst suffering defeat on 59 occasions and a further 51 draws.

It is his fifth managerial position to date, already his longest, in a career which started with Mansfield Town in 2002.

Curle took that role on a player-manager basis and couldn’t prevent them from relegation to the fourth tier in his first few months in charge. He almost led them to promotion in the following season, however, although the Stags lost on penalties to Huddersfield Town in the play-off final.

He was dismissed from his role in December 2004 and returned to management with Chester City in May 2005.

The 54-year old only lasted nine months in the role and spent a year away from the game before joining Torquay United. This was again just a short-term stiint as Curle was unable to prevent relegation.

Curle took a step back for the next five years, becoming a coach at both Crystal Palace and Queens Park Rangers under Neil Warnock.

But when Warnock was sacked at Loftus Road, Curle then moved to Notts County as manager in February 2012.

He missed out on the play-offs via goal difference in the first few months of his reign, before breaking a 41-year record at the club by going 10+ away games unbeaten. The run went as far as 22 consecutive games before a 2-1 defeat at Leyton Orient.

His contract was terminated on 3rd February 2013 and he has only been in charge with Carlisle since then.

Prior to management, Curle had a highly successful playing career that spanned 24 years.

He spent the majority of his time with Man City and Wolves, making over 150 appearances at both clubs as a defender. He scored 35 goals from 708 appearances throughout his career.

Curle was also capped by England on three occasions. 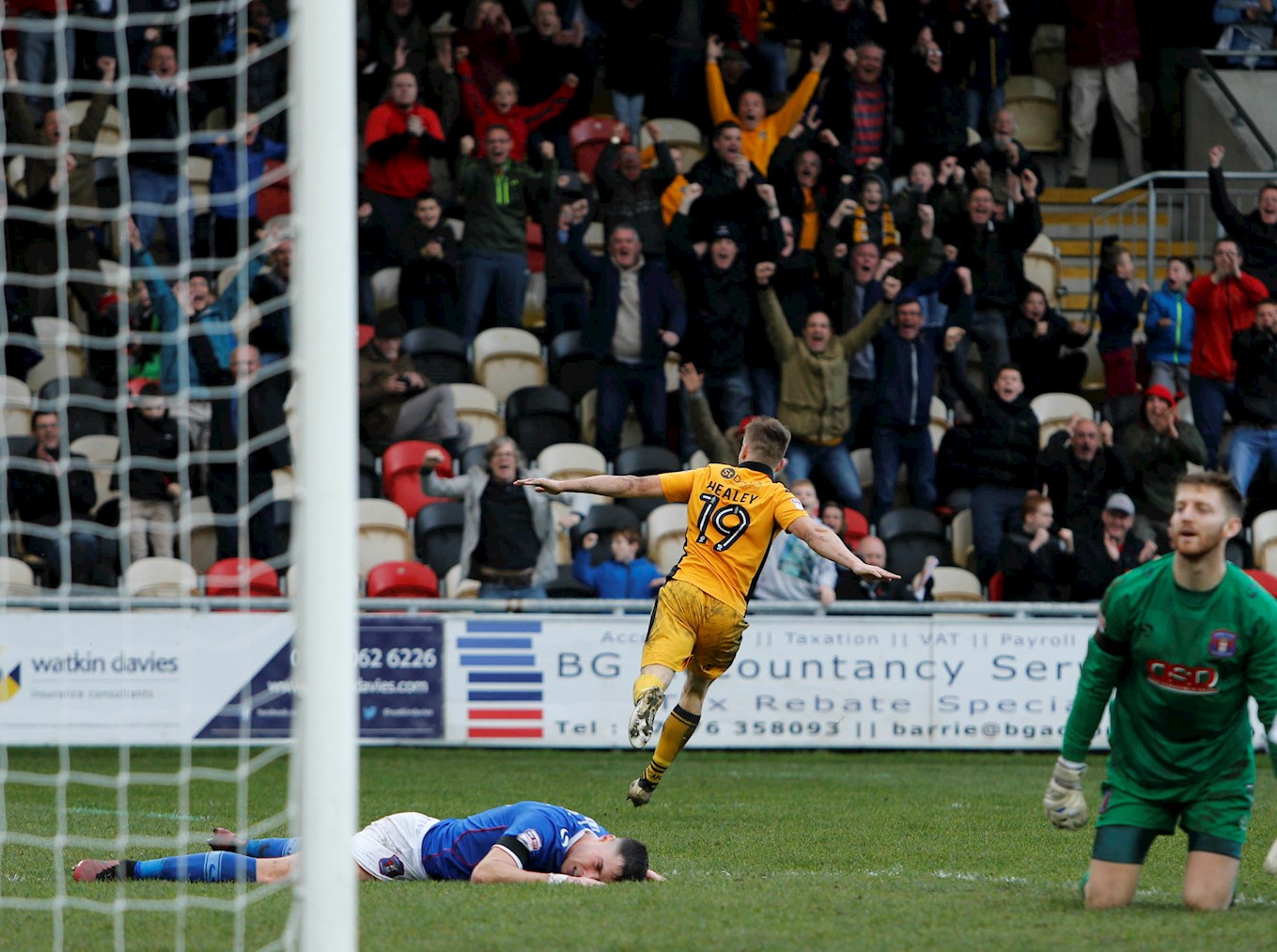 This will be the 17th competitive meeting between the two sides.

County currently hold the superior head-to-head record, with eight previous victories. Carlisle have won four meetings of their own, with a further four draws.

However, Carlisle were victorious in the first meeting between the two sides. That came on 12th October 1963 as the Cumbrians secured a 4-1 away victory in South Wales.

You have to wait just under 17 years to find the first County victory over Carlisle, although it was worth the wait as the Exiles also secured their first win in this fixture with a 4-1 away victory on 30th August 1980.

Looking at the statistics after County’s reformation in 1989, the two sides have met on six previous occasions, all coming in League 2.

And County have certainly had the better record in this time frame, having won five of the six meetings.

The first of those fixtures certainly had the most entertainment factor – as County won 3-2. Yan Klukowski, Ismail Yakubu and Sean Jeffers all scored in Cumbria to extend their unbeaten record to eight matches.

They followed that up with a 2-1 win at Rodney Parade, this time Adam Chapman and Lee Minshull scoring for the Exiles.

In 2015/16, County secured a 1-0 victory in both matches. In the away fixture, Tyler Blackwood secured the points for County with 20 minutes to go, in what was Terry Butcher’s only win whilst in charge with the club. Scott Boden scored the winner in South Wales.

At Rodney Parade, the Exiles inflicted Carlisle’s first defeat of the season with a 2-0 victory, Rhys Healey and Josh Sheehan the scorers.

In Cumbria, the Exiles could have secured their safety a game earlier with a victory. And it looked to be going to plan as Mickey Demetriou scored an early opener.

But goals from Jabo Ibehre and Nicky Adams gave Carlisle their first win over County since 1988, setting up that dramatic finish with Notts County last term. 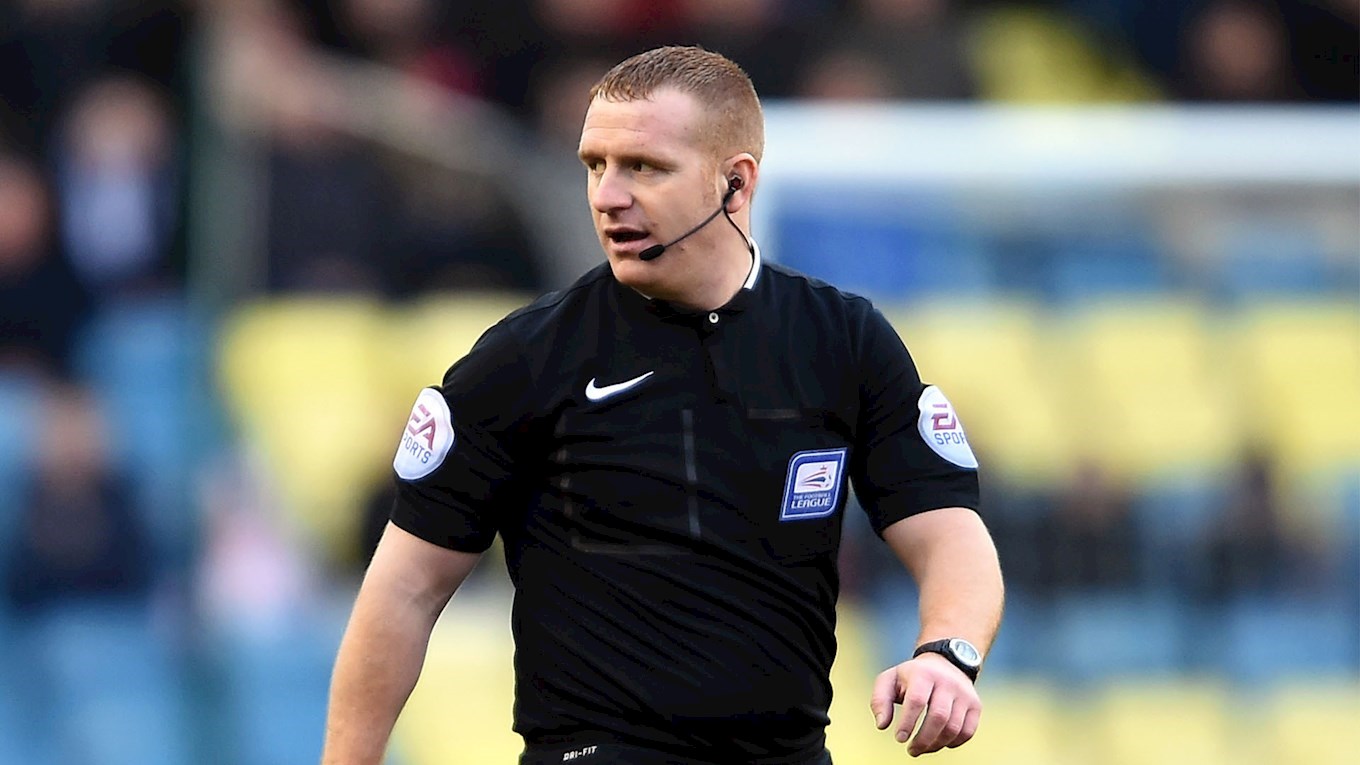 Swabey is currently embarking on just his third season as a Football League referee following his promotion from the National League.

Interestingly, he has only refereed five games this season, the last of which came on Tuesday night in Charlton’s 3-2 victory over Swansea U23s in the CheckaTrade Trophy.

He has been the Fourth Official for matches on four previous occasions this campaign, having given out 16 yellow cards and no red cards.

That follows on from his record in the 2016/17 campaign which reads as 62 yellows and three red cards from 15 matches.

And in his debut Football League season of 2015/16, Swabey brandished 98 yellow cards and 11 red cards from 31 games. 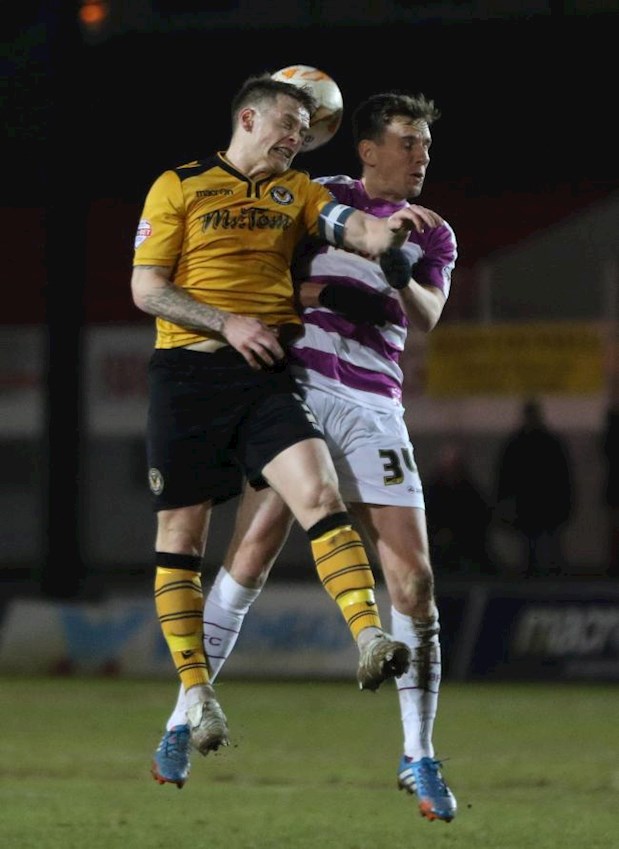 Swabey has refereed County on five previous occasions and all of them have come at Rodney Parade.

Remarkably, there has never been a draw in a County game officiated by Swabey, as the Exiles have won two and lost three of the previous matches.

Four of the five games came in the 2012/13 promotion season, starting with the 2-1 victory over Lincoln City on 18th August. Jake Thompson was booked on that occasion for the Exiles.

Swabey also refereed the 3-1 home defeat to Hyde United, with Christian Jolley scoring. Again, only the one yellow for County, Andrew Hughes the offender this time.

Next came the 2-0 defeat to Barrow. Six yellows cards were awarded in this fixture, two to County, those going to David Pipe and Lee Evans.

The final game that season came in the 2-1 success over AFC Telford United. Christian Jolley and Danny Crow scored as no bookings were given to the Exiles.

The only other occasion Swabey has refereed a County game came in the 2015/16 season. Danny Holmes and Ben Davies were booked as Barnet won 3-0 at Rodney Parade.