Defender Dan Butler takes home the top prize at the NCAFC End of Season Awards as over 50% of the supporters vote him NCAFC Player of the Year.

On the 28th April 2018 (and following a fantastic third home win in a row) Newport County AFC held their Annual End of Season Awards in the We Fight Any Claim Marquee.  Tickets were £2 with all the money going to County in the Community.

Here's how the evening unfolded...

Young Supporter of the Year

Supporter Rhys Young wasn't able to attend the End of Season Awards but his commitment to following County this Season has been incredible.

Supporter of the Year

Also unable to attend, Tony Davies was announced as the Supporter of the Year.

Supporters Club Away Player of the Year 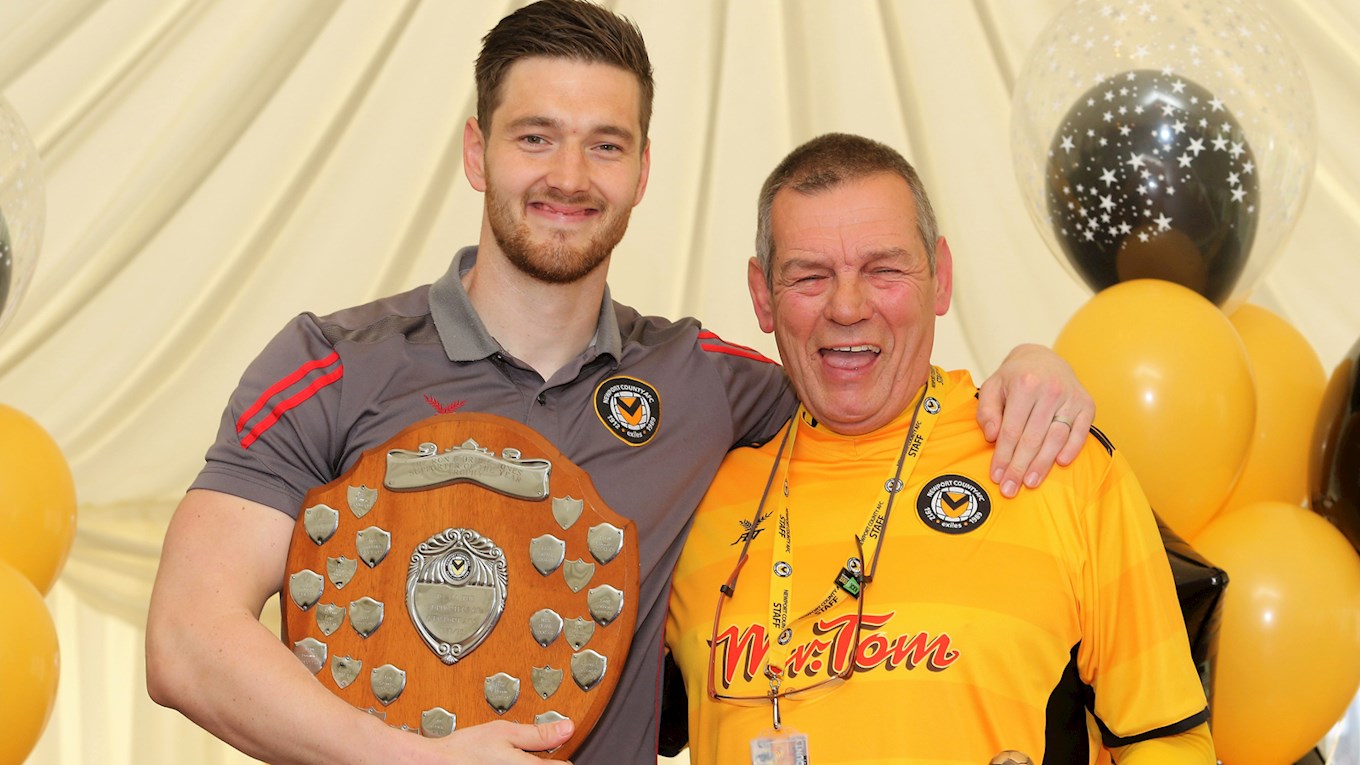 On the way home from each away trip, the Supporters Club Coach vote for their player of the match.  The Away Player of the Year is the player who recieves the winning number of votes the highest number of times throughout the season.  This year that honour fell to Joe Day who recieved his award from Bob Herrin. 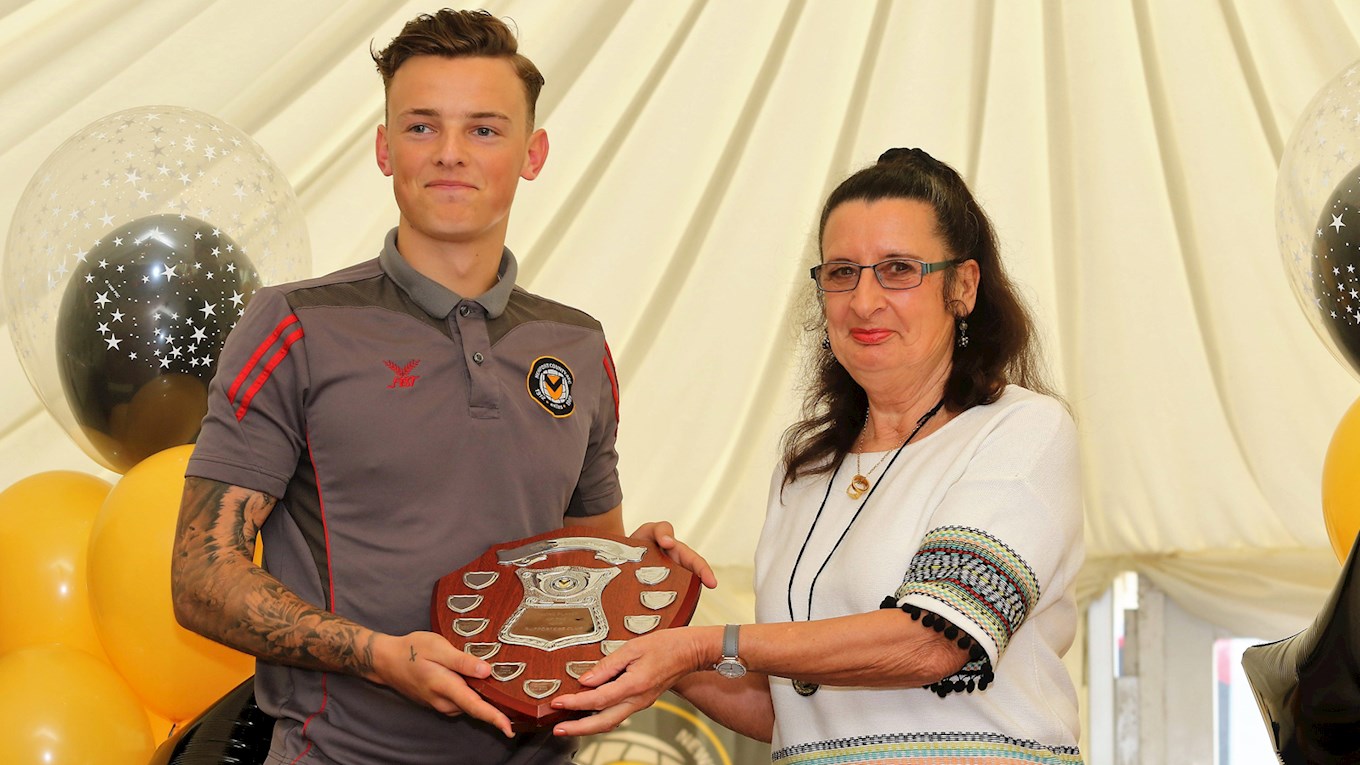 Presented by Cath Clarke, the Supporters Club voted Ben White their Young Player of the Year.  One of the stand out performers of the Season and aged just twenty years old, he has a very bright future ahead of him.

Supporters Club Player of the Year 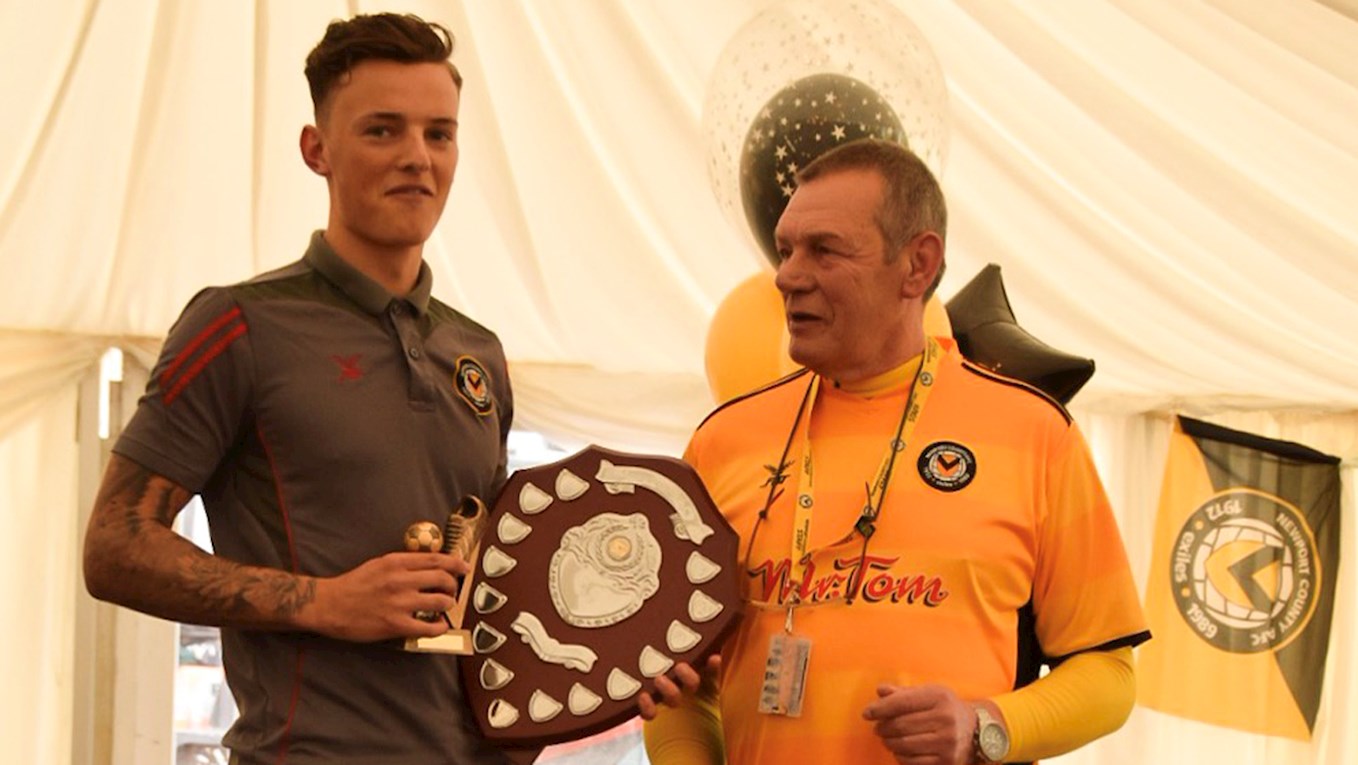 Ben White barely had time to sit down before he was being called up for a second time.  This time to recieve the overall Supporters Club Player of the Year award.

"Thank you for all your efforts this season, Ben, and best of luck in the future." 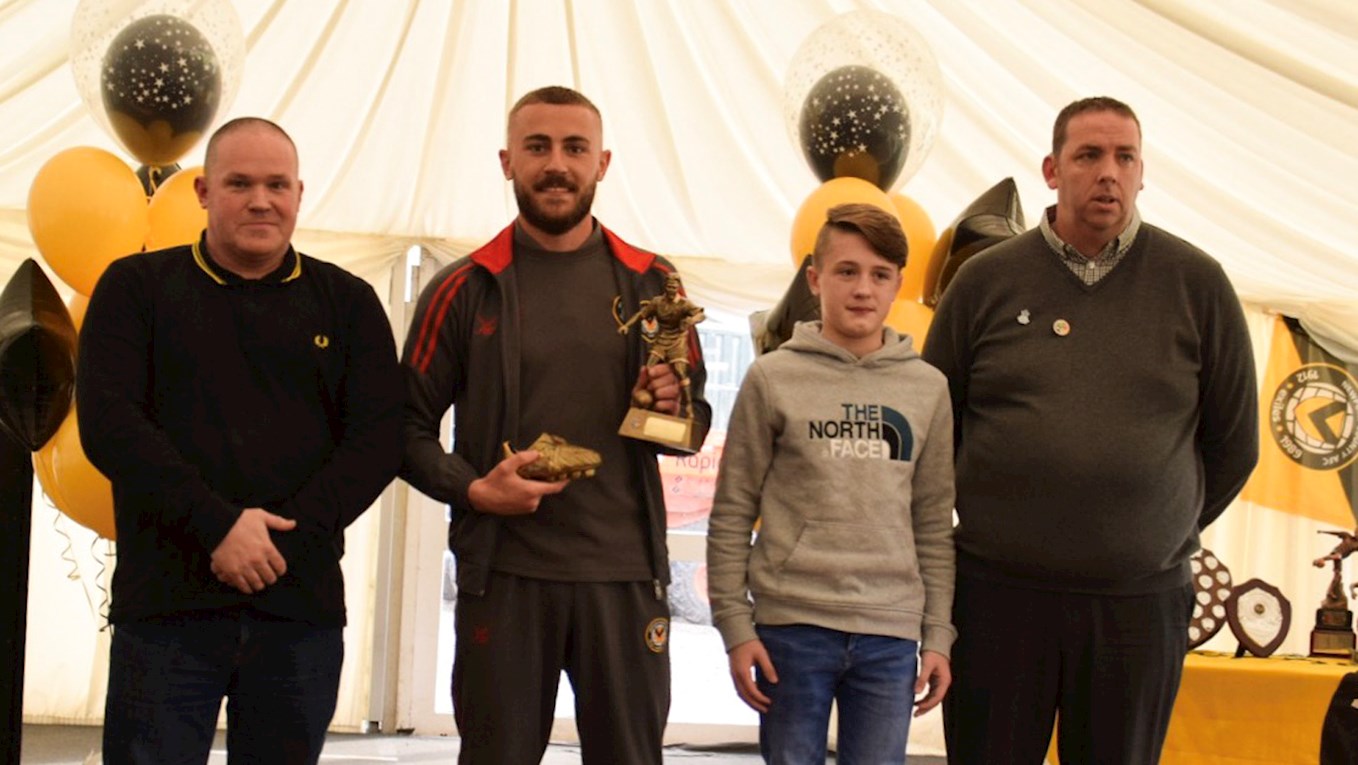 This award is voted for by the members of the Newport County AFC DSA and takes into account on the field performances and off-field work and support.  The Award, presented by DSA Chairman Colin Faulkner along with Dean Meer and Nathan Evans, was given to Dan Butler.

County in the Community had the great honour of presenting the vast majority of their awards on the pitch at half time.  Click here to learn about all the winners.

PFA Community Player of the Year 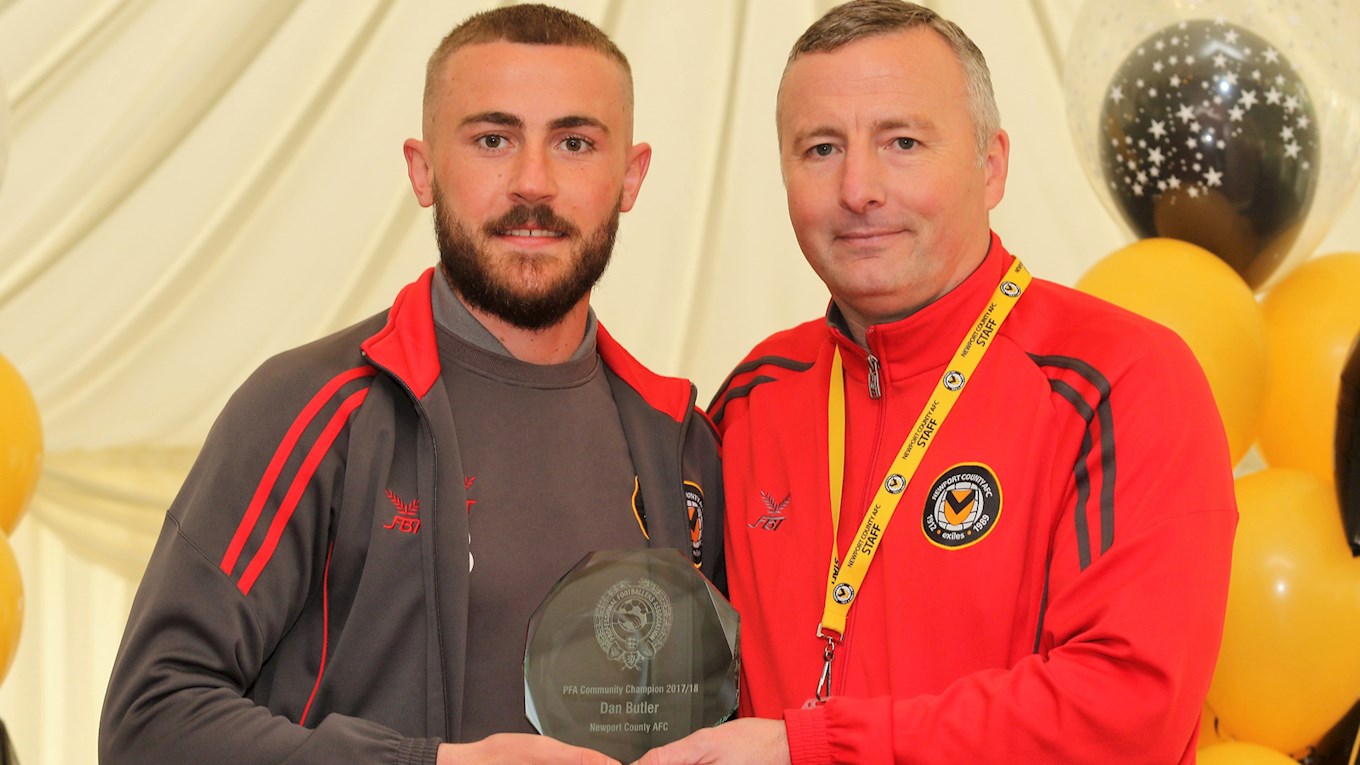 Awarded to Dan Butler because of the phenominal work he puts in with the Community Teams, Norman Parselle wrote:

"Dan has attended many community visits over the last year and when he attends he always gives his full commitment, just like when he plays. He is one of the nicest people you will ever meet and has made a very big impression on participants at our We Wear the Same Shirt programme." 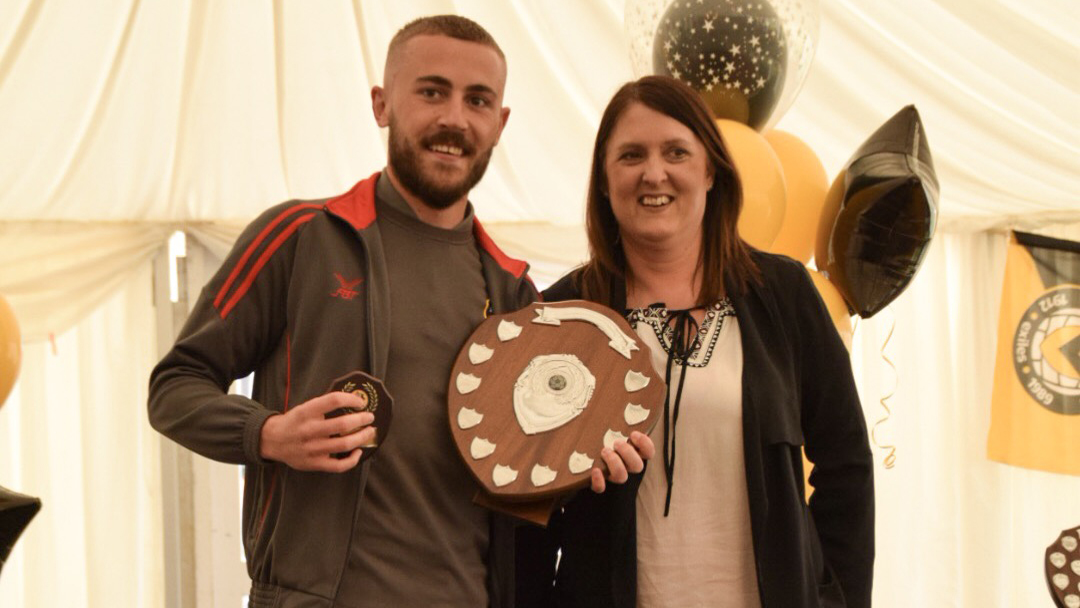 Dan Butler also won the Club's Community Player of the Year award which was presented by Julie Cook. 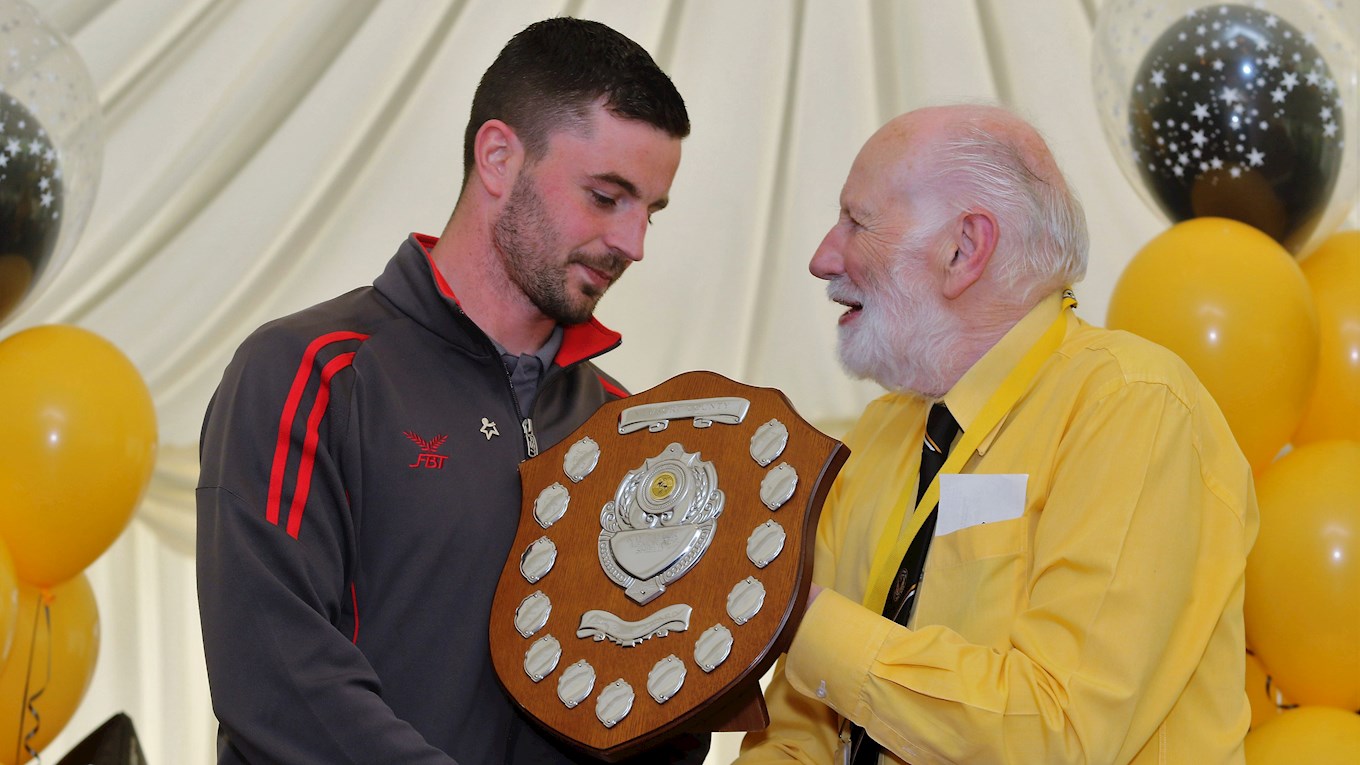 Presented by Club President David Hando, the Fair Play Award goes to a player who has shown great character throughout the season and who plays the game in the best spirit.  This Season, the award was presented to Padraig Amond.

Derek Williams Memorial Award for Goal of the Season 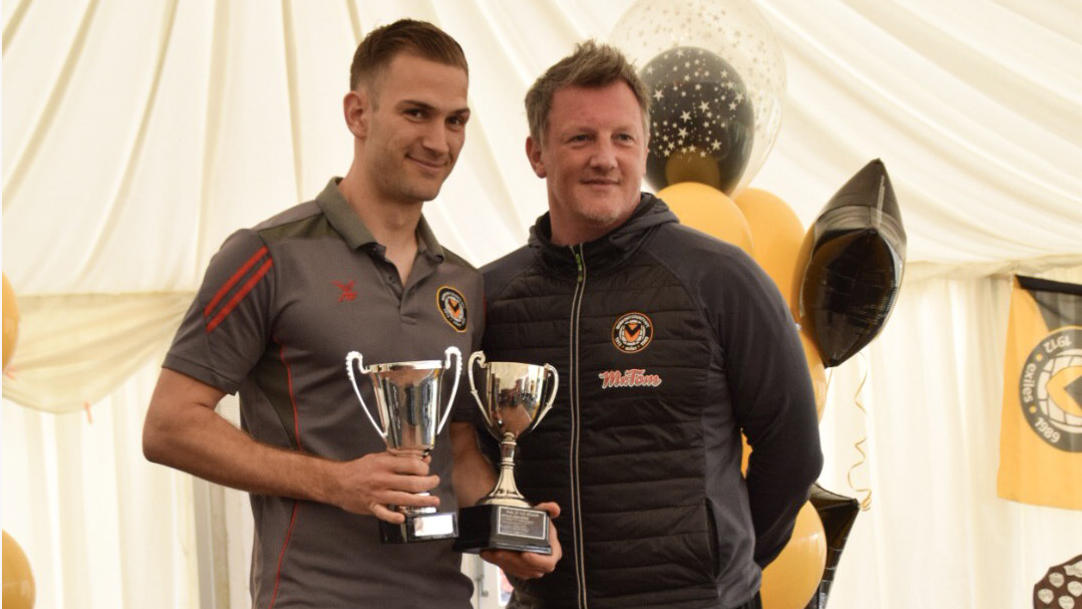 There were a few fantastic strikes to choose between this Season but the eventual winner came just 77 minutes into the very first game.  Playing away from home, only 400 supporters got to enjoy it but the strike was so good it was even applauded by Stevenage fans.

Here's your NCAFC 2017-18 Goal of the Season scored by Mickey Demetriou. 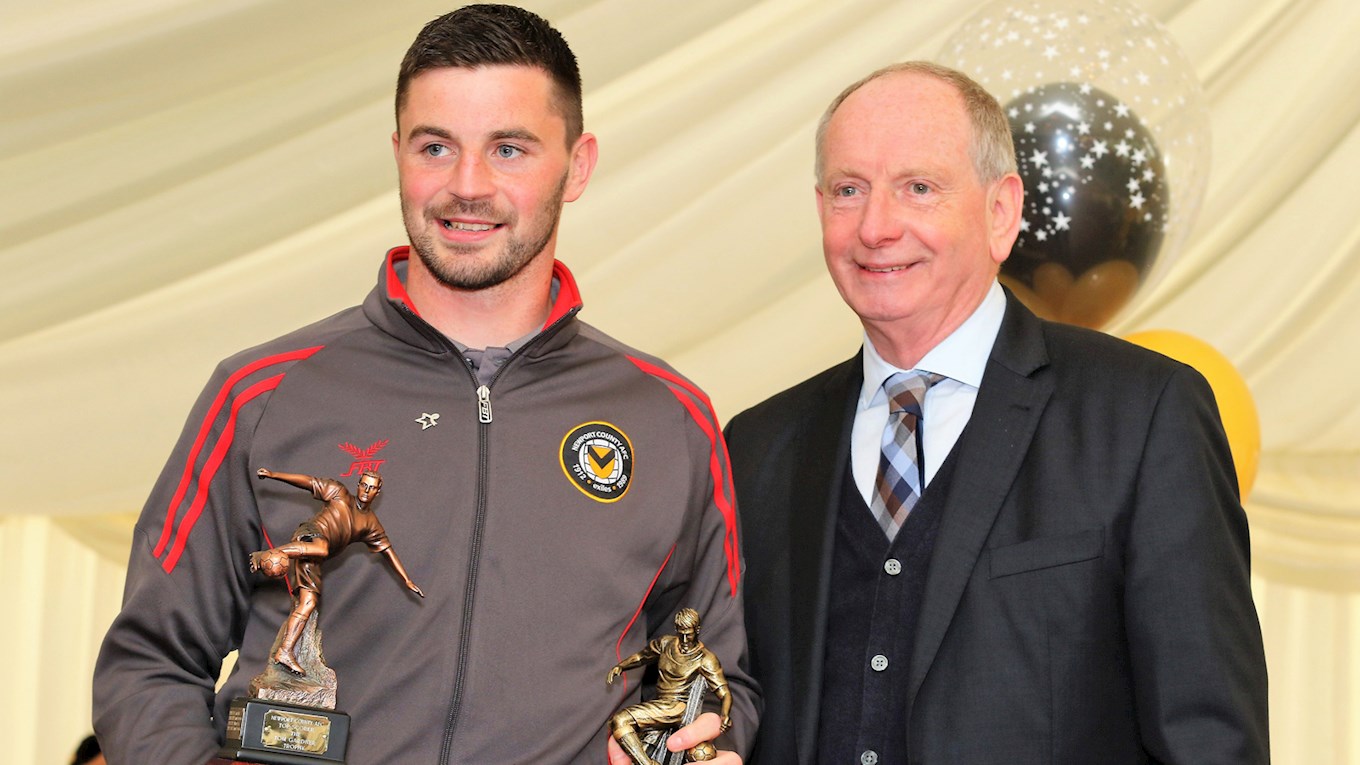 The winner with 14 goals (at the time of the presentation) is Padraig Amond who's scored a number of fantastic and important goals this season including a memorable header against Spurs.

Reg Parson's Trophy for Most Appearances 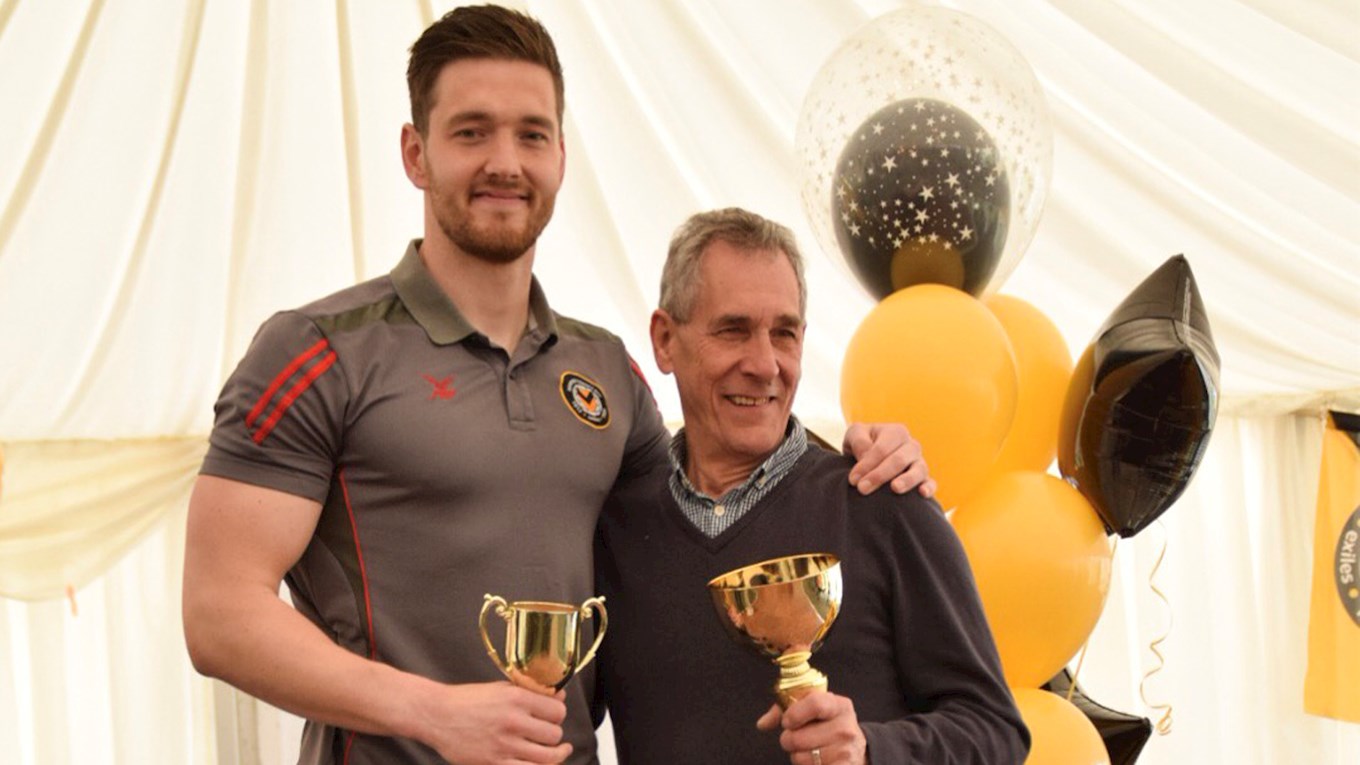 Presented by Tony Parsons and awarded to the ever present and ever dependable Joe Day.

Doc Heffernan Shield for Young Player of the Year 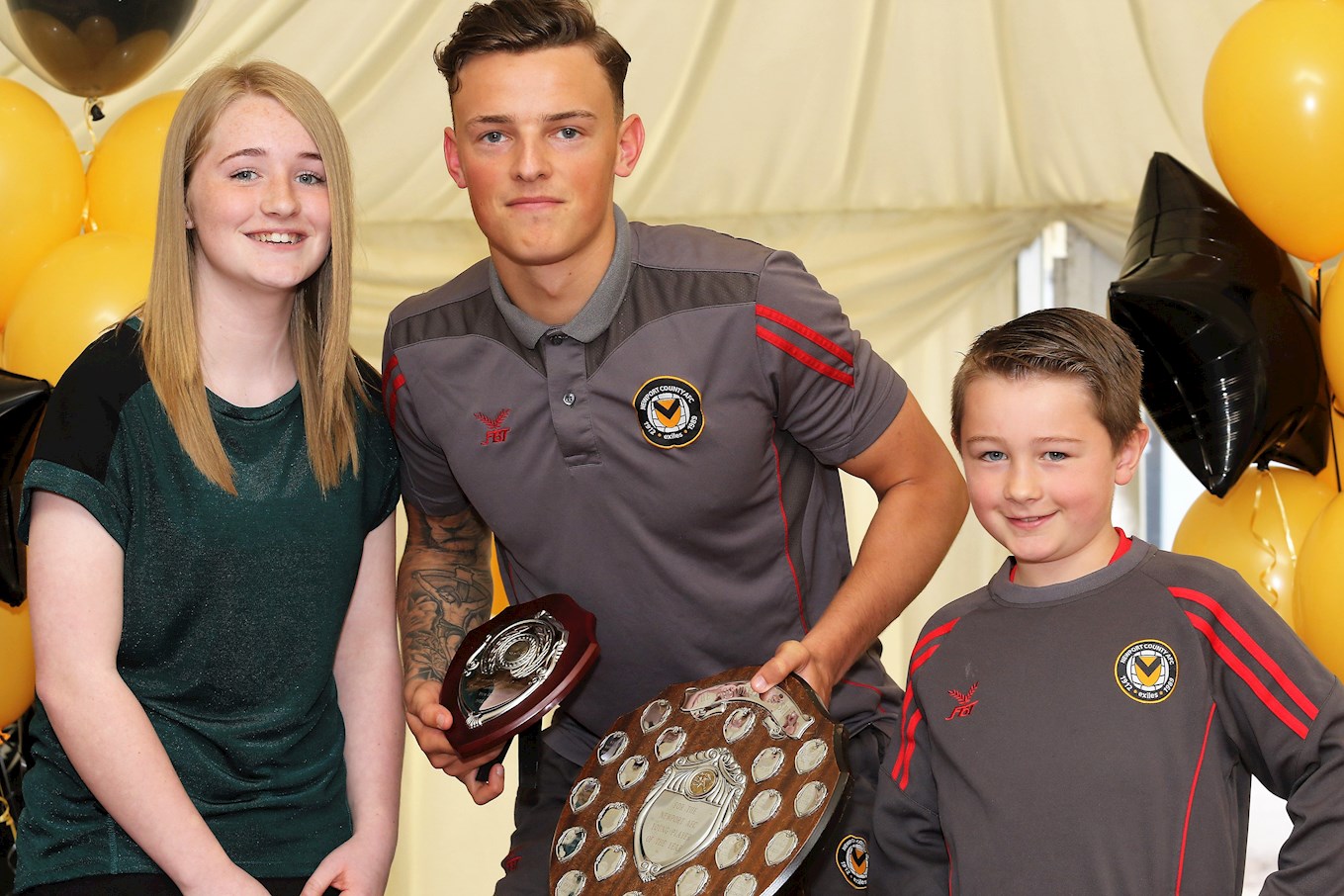 It has been awarded to Ben White.  Michael Flynn upgraded his comment from earlier in the season when he described Ben White as possibly the best loan signing the Club has ever made to "deffinitely the best".  From his off-the-line clearances, to his numerous assists and even his first League Goal, his contribution has been undeniable.  At just 20 years old and having just signed a three year deal with parent Club Brighton and Hove Albion, Ben White has a bright future ahead of him.

Brian's Tom's President's Cup for Player's Player of the Year 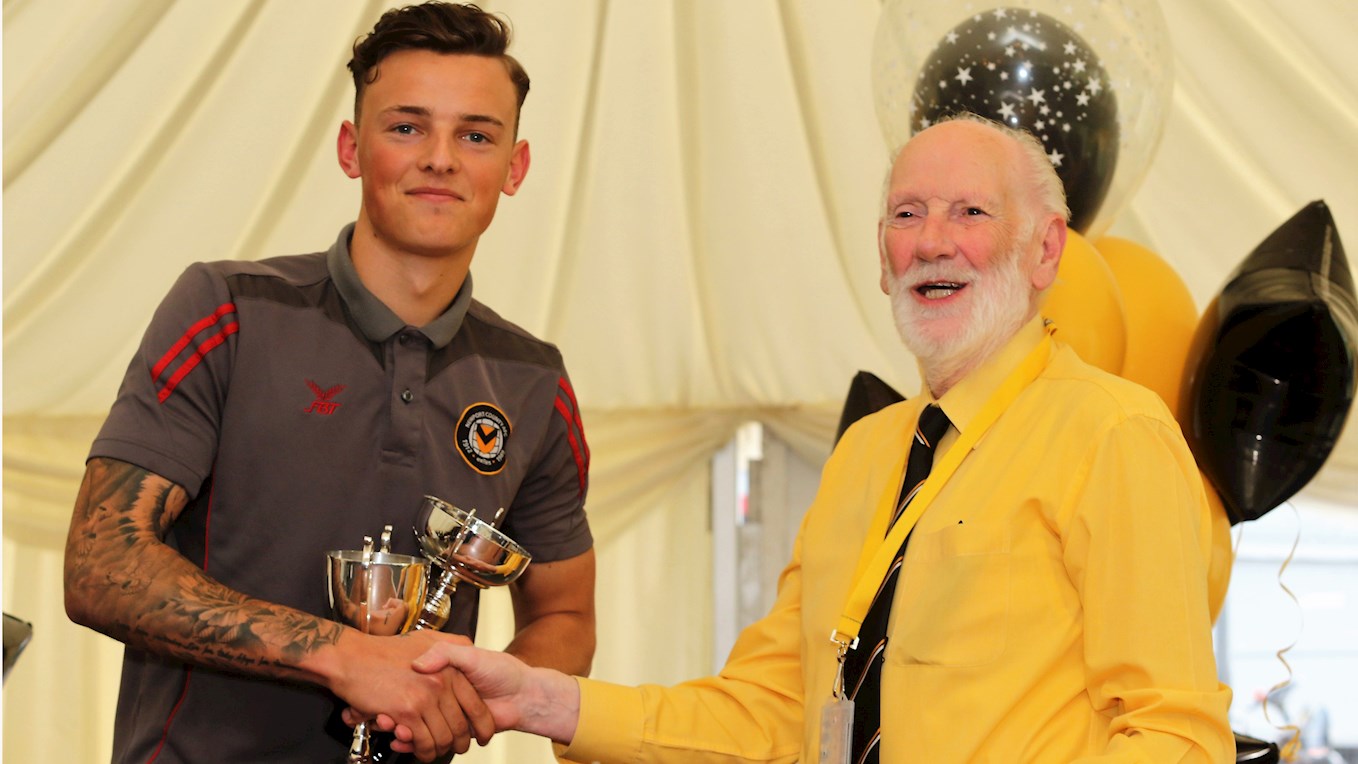 Presented by Club President David Hando, the winner is once again Ben White!  What an unbelieveable season for the 20-year old. The first EFL goal of his career vs Barnet in November, registering 50 appearances for the club (to date) and a new contract with Premier League outfit Brighton & Hove Albion to boot.

Patron's Cup for Newport County AFC Player of the Year 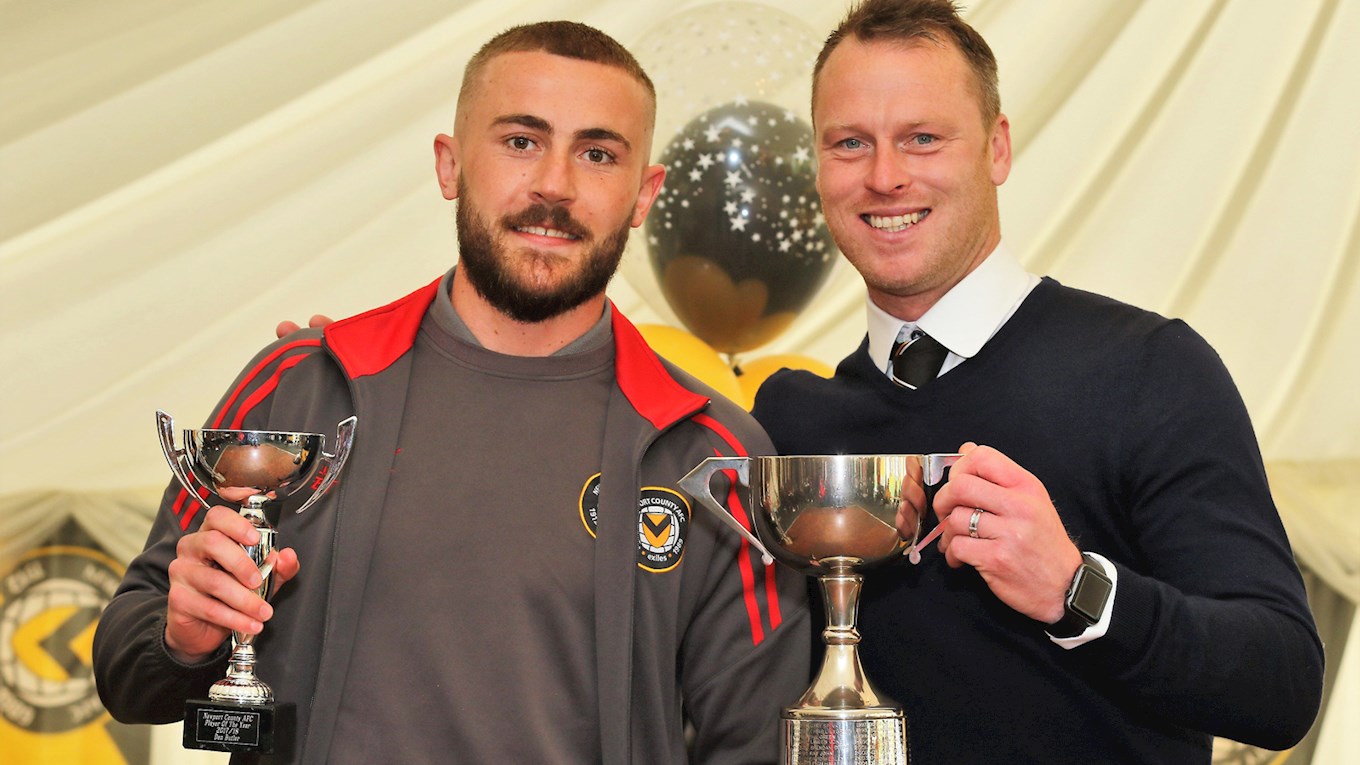 Voted for by over 500 supporters, the Award is presented to the Newport County AFC Fans Player of the Year.  And the winner is ... Dan Butler.

Dan said: "A massive thank you to everyone who voted for me."

This award comes in the same week that Dan Butler has signed another year deal with the Club.

Newport County AFC would like to thank Tim Thraves for presenting, Ian Lamsdale and Newport City Radio for hosting, and the incredibly talented Ruby Kelly for performing.

We'd also like to thank Mac Morgan and Nicola Johns for the photos.