The team togetherness at Newport County AFC is the key reason that the side have been able to hit the ground running this season with tough, resolute performances - according to striker Padraig Amond.

Even after only five games, the Exiles are one of the early pace setters in League Two and currently reside within the play-off positions in fifth place.

County ascended into that position thanks to a victory over Amond’s former side Grimsby Town – a game in which Matty Dolan netted the match winner with a perfectly executed 25-yard free-kick.

The Exiles could have had more in a comfortable performance at Rodney Parade, but found Grimsby goalkeeper James McKeown in inspired form with a couple of saves as-well as hitting the side netting on occasion.

Victory ensured County maintained their 100% record at Rodney Parade to start the season and here, you can read what Amond exclusively told iFollow Exiles upon the completion of the game.

On the victory against his former employers Grimsby Town…

"Obviously making it three from three at Rodney Parade is great because it means we’ve secured another win at home.

"First-half, I thought we were really, really good – especially the last 20 minutes of the half because we played some fantastic football and were perhaps unlucky not to be 2-0 ahead.

"Second-half, we started a small bit slow, but I thought we put in a really good, professional performance – and then saw out the game really well.

"The two boys that came on up-front saw the game out brilliantly and it’s a fantastic result for us. Keeping a clean sheet, getting another victory and maintaining the 100% record at home from the first three games. It’s fantastic.

"To be honest, I didn’t realise that we had 20 shots today. Obviously, you want to be scoring more goals and stuff like that. But when you look at the other side of it, I don’t think Grimsby had any opportunities themselves.

"They had one shot I think in the whole game and that came in the first half. It was a free header, but nothing really happened. It was a good performance from us defensively and like I said, you’re happy if you keep a clean sheet and win the game. 1-0 you’re happy with that every week." 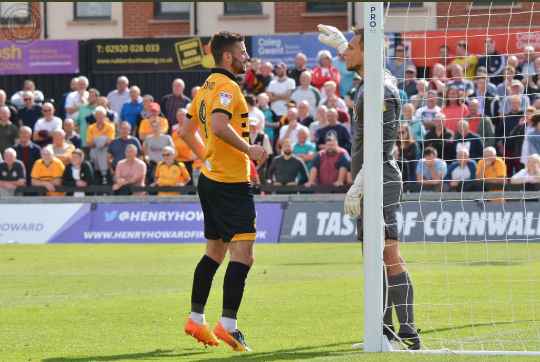 "It’s something I’ve never done for Newport before but I used to do it quite a bit with Grimsby.

"I don’t think he [James McKeown]  could get his wall set enough, I’m not sure whether that actually had anything to do with it anyway, because Matty’s free-kick is unbelievable.

"I don’t think it takes anything from me for him to score but I suppose it is good to get as much of an advantage as you can. If those sort of things get 1% for us, then I’ll take it. It was just something that came to me basically. I went in to get a drink first initially, and I thought do you know what, I’m here and I know Macca [James McKeown] so I’ll just have a little chat to him to try and wind him up a little bit. It worked.

"Macca and I speak to each other all the time. He’s a really good keeper and he’s a great person as-well. He’s a fantastic individual, can’t speak highly enough of him and it’s great to see him again. Great to get one over on him again obviously but yeah, you go through football and you have team-mates, you click with some of those players and Macca is one that I will keep in contact with for the rest of my life.

"We always have a bit of banter, so I’ll be texting him just trying to wind him up a bit more. As I said, he’s a great lad and I really enjoyed the year I spent as his team-mate.

"The free-kick itself is unbelievable. It’s funny because Dan Butler was saying something to him just before it because he missed one earlier and I think Dan was saying well come on you missed the last one.

"But Matty’s told him no, I’m going to stick this one in the back of the net and to be fair to him, it’s a fantastic strike and it deserves to win any game.

"To be fair, there was quite a strong wind in the first-half so when he hit the first free-kick, it’s quite a big distance out anyway – in between crossing and shooting distance. He has the quality to hit it but as he hits it, it just rolls. Carlisle last year when he scored the two goals in the second-half, Matty loves them, he’s a fantastic free-kick expert and set-pieces too with corners.

"It’s a great outlet for us to have and as we’ve said, it’s a fantastic free-kick and deserves to win any game."

On goals coming from all departments of the team…

"Look, it’s brilliant that there are goals being chipped in all over the place. You don’t just want to be relying on your strikers for goals, it would obviously be great if you had four strikers who all scored 15 goals each in a season.

"But at the same time, you need other players chipping in with the goals. Fraser the other night, Matty today, and the lads can do that all the time. Mickey is obviously a threat in the air, Benno gets the odd goal, we’re challenging Dan Butler to get a few goals at the right end this time!

"Look, there’s goals all over the pitch – Tyreeq has come in and been excellent in his first couple of games. Sheezy [Josh Sheehan] will pop up with a few goals I’m sure so we do have goals within the team.

"There are different outlets so there’s no pressure on one person to score all them goals because we do know we can get them from anywhere on the pitch."

"It’s been a good year - I’m really enjoying it. The club have made me feel very welcome, the lads as-well. I enjoy working for the staff, I enjoy playing with the players and I enjoy every day in training.

"I’m just loving life at the minute. Things have gone well for us on the pitch, a little blip at the end of last season of course, but personally I’m really, really enjoying it so far. I’m settled in the area as-well, so long may it continue.

"In terms of this season specifically, we could have scored a few more goals but I think if someone said to you that we’d be fifth in the league at this time of year then you’d be very, very pleased with how it has been so far.

"I know it’s a cliché, but we’ll take every game as it comes and try to put as many good performances as we can. If we keep putting in the level of performance like today and Tuesday night against Notts County, then we’ll do well.

"We’re trying to make Rodney Parade into a fortress, three wins out of three now here so if we can keep it going then we’ll have a decent year."

"We’ll be going in as underdogs. They are a league above us, and their win today [against Burton Albion] will give them a bit of confidence. We’ll go in trying to win, we have a lot of confidence in this team, and we want to get a good draw in the next round if we can.

"Oxford will be the favourites, but we can cause trouble to anybody. If we play like we did against Cambridge in the First Round, then we’ll be a match for anybody. Hopefully, we go into the game on Tuesday night and manage to keep our good record going here.

"The Leeds game last season basically allowed my signing to happen. I was really grateful for that to happen, Leeds made a fantastic gesture to the club, I think they gave us half the gate receipts when they didn’t have to.

"That was really, really nice of them and it does help in the lower leagues. It gives you that chance to bring in an extra player that you might not have been able to sign otherwise and that was basically the case with myself.

"Ultimately, if it’s a good cup run as-well then it can put you into the limelight. Especially last year playing well against Leeds, it entices players to come to the football club.

"Getting the draw with Spurs in the FA Cup also allowed us to show everyone that we do play to a good standard. Players will want to come here and as you can see, we enticed a couple of good players in from Bristol and Cardiff on loan. If we can keep those relationships good, then it’ll be fantastic for the club and the manager as-well."

From just £4.49 per month or £45 for a Season Pass, you will have access to exclusive post-match interviews after every match, exclusive behind the scenes content, full match replays, extended highlights (with commentary) from all EFL Matches and full LIVE commentary from EVERY Newport County AFC match.

The majority of your iFollow fee goes to straight back to the Club. Subscribe today and help support your Club!