County travel to Gloucestershire hoping to progress further in the CheckaTrade Trophy, one of three fronts the Exiles are still fighting on, whilst the hosts will be looking to maintain some recent impressive home form.

Here, you can find all the facts and statistics ahead of this CheckaTrade Trophy knockout stage encounter…

How Cheltenham Town qualified from their CheckaTrade Trophy group 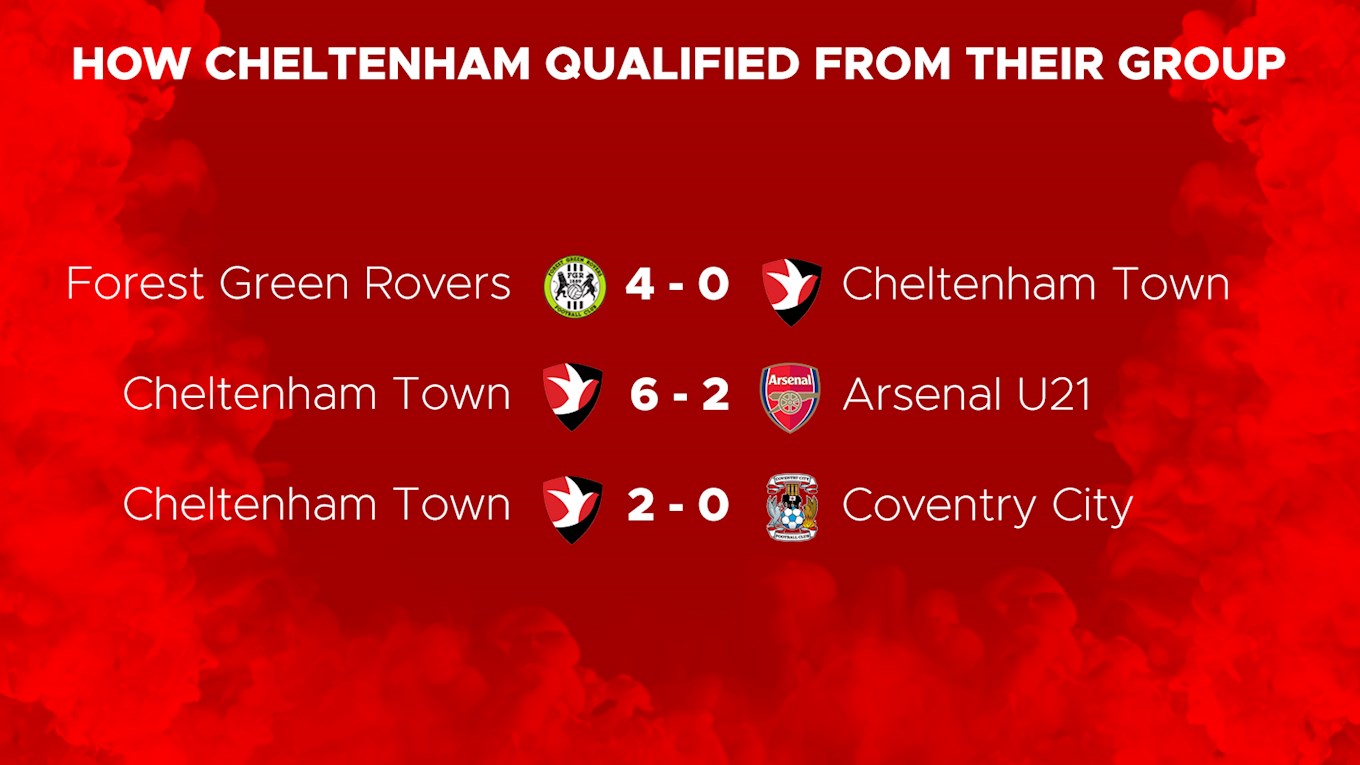 Cheltenham Town fought off some strong competition to top their CheckaTrade Trophy group and qualify for the knockout stages of the competition for the second time in three years.

In a group stage format composed of just three games, it certainly takes a unique spirit to qualify having lost the opening group game 4-0 – but that’s exactly what the Robins did after the reverse to Forest Green Rovers on 4th September.

Dayle Grubb opened the scoring in a game dominated from start to finish by the Green Devils, with Tahvon Campbell, George Williams and Isaac Pearce making it a rather comprehensive ‘El Glosico’ victory for the home side.

The Robins needed a response, manager Michael Duff had come in to replace Gary Johnson, and he got them firing in the CheckaTrade Trophy with a victory that nullified the club’s goal difference.

An early red card for Arsenal U21s midfielder Robbie Burton helped the Robins to a 6-2 victory over Freddie Ljungberg’s side. The goal scorers were Chris Clements, Will Boyle, Kelsey Mooney, Ryan Broom and two for Jacob Maddox. Tyreece John-Jules and Charlie Gilmour got the Arsenal replies.

Cheltenham’s passage to the knockout stages wasn’t quite secured until the final group game when they played a winner takes all home tie with Coventry City. Maddox’s first-half opener allayed any fears of missing the chance of progression, whilst Boyle’s header ensured they topped the group. 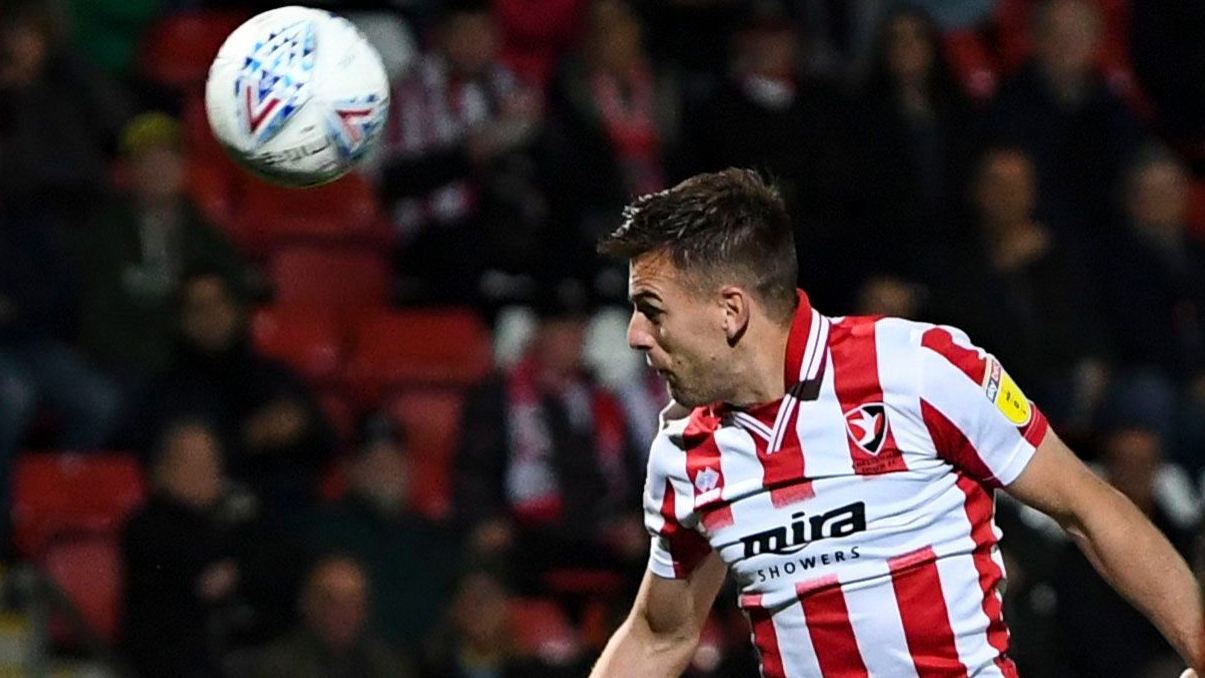 Cheltenham Town manager Michael Duff has several selection dilemmas to make after being knocked out of the Emirates FA Cup by Accrington Stanley on Saturday.

Chelsea loanee Jacob Maddox made a welcome return from injury against the League One outfit, but he tired as the game went on and Duff might not risk the midfielder to allow him extra recovery time.

He commented: “Gav the physio had watched him for the first 15 or 16 minutes of the second half and he didn't look like he was quite moving right. He didn't want to come off, but sometimes you need to take the decision out of the player's hands.”

The Cheltenham boss will, however, definitely be missing two members of his squad after he ruled out returns for defender Sean Long and midfielder Kevin Dawson.

Duff said last week: “Longy went in to have a small procedure and he’s rehabilitating from that now. Daws had quite a bad one in the end with his medial ligament so, I am not medic, but I would expect him to be at least another six or seven weeks.”

Aston Villa loanee Kelsey Mooney has been struggling with a slight niggle, but he was an unused substitute at the Wham Stadium, so he may feature at some point in Gloucestershire.

One to Watch – Alex Addai 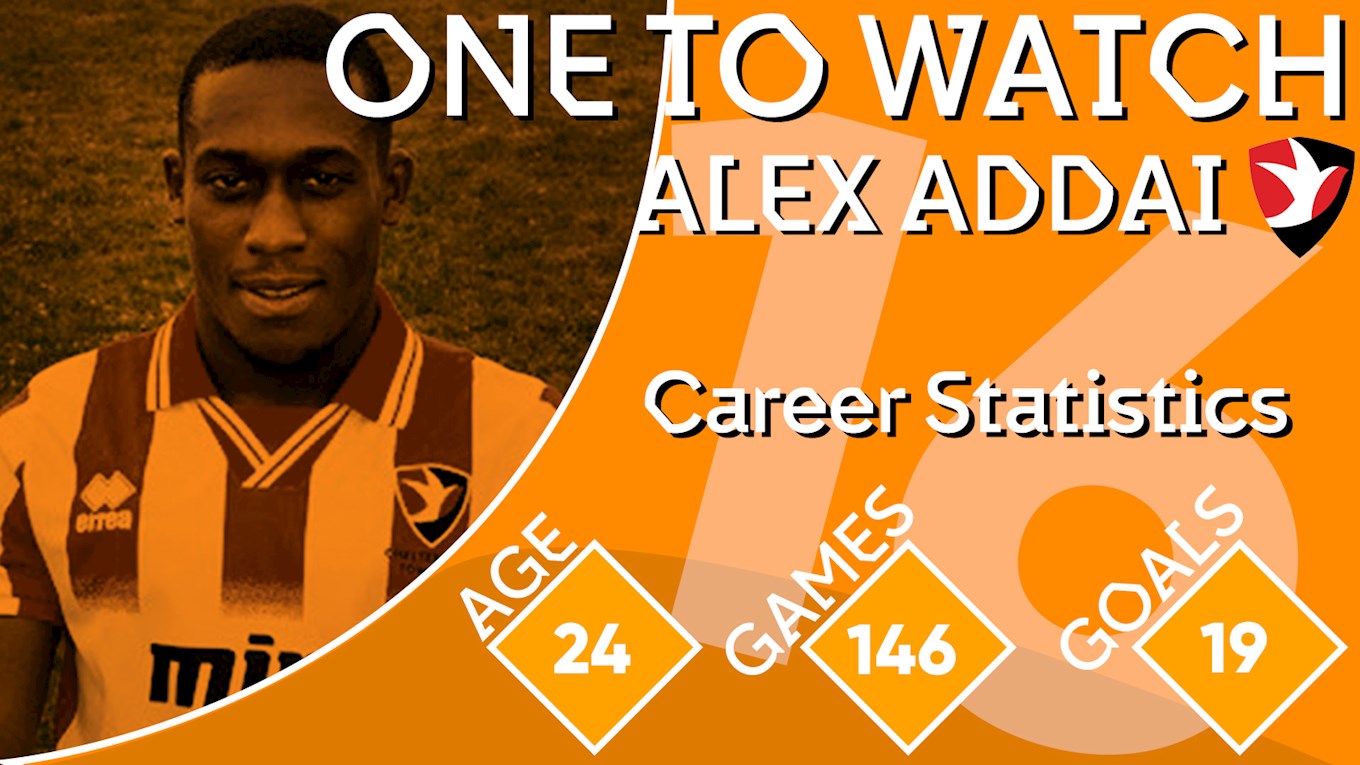 Influential midfielder Alex Addai looks like he’s settling in to life as a Football League player and has become the talk of the town – and most of Michael Duff’s press conferences – of late.

The 24-year old will head into Tuesday night’s CheckaTrade Trophy clash with a bit of form as well – having scored his first professional goal against Ebbsfleet United last month and scoring past Accrington Stanley on the weekend.

Speaking after his inaugural Robins goal, Addai said: “First goal as a professional, absolutely delighted to be fair. I couldn’t believe it when it fell to me [three yards out] but I’ll definitely take it.”

It wasn’t the easiest of spells for the midfielder before this rich vein of current form where he seems to write the headlines individually. Played a lot by Gary Johnson having joined at the back end of last season, then out of the side to start with under Michael Duff, but now back as an integral part of the team.

He continued: “It’s not been easy but that’s the life as a footballer. Every day has been a learning curve and I’ve learnt a lot about myself. I’ve had to work hard but now I’m back within it – and I’m hungry for more.”

Before joining Cheltenham Town ahead of the summer, Addai had previously spent his adult career within the non-leagues.

A year below World Cup Golden Boot winner Harry Kane in the Tottenham Hotspur youth set-up, Addai went from there to Blackpool, but again couldn’t force his way into the first team.

He had been playing for Merstham before his arrival at the Robins, netting 13 goals in 74 appearances, alongside featuring for Carshalton Athletic, Whitehawk, Grays, Wingate & Finchley and Kingstonian.

Just ten days after the last visit to Gloucestershire, County are once again expected to travel in numbers to the Jonny-Rocks Stadium – one of the closest grounds to Rodney Parade.

Home to one of the narrowest pitches in the Football League, the Gloucestershire venue is also relatively small in stature and has a total capacity of 7,066.

The record attendance is slightly higher than that, however, as 8,326 fans saw Reading defeat the Robins 2-1 in the Emirates FA Cup on 17th November 1956.

On matchday, County supporters will be housed in the Hazlewoods Stand, where up to 1,100 fans can be accommodated behind one of the goals. On occasion, away sides are also given some sections of the Colin Farmer Stand, which runs alongside the pitch.

Saturday’s contest will be the sixth trip to Cheltenham since County’s promotion to the Football League in 2013 and the Exiles will be trying to defend a pretty impressive record in Gloucestershire.

In the ‘Great Escape’ season, 841 County fans were there to witness Janaai Gordon’s dramatic stoppage time equaliser in a 1-1 draw on 4th February 2017, whilst it was another stalemate on 30th December 2017 in-front of 916 away supporters.

On 24th November 2018, County fell to their first defeat in Gloucestershire since returning to the Football League, 936 away supporters there to witness the 2-1 reverse. 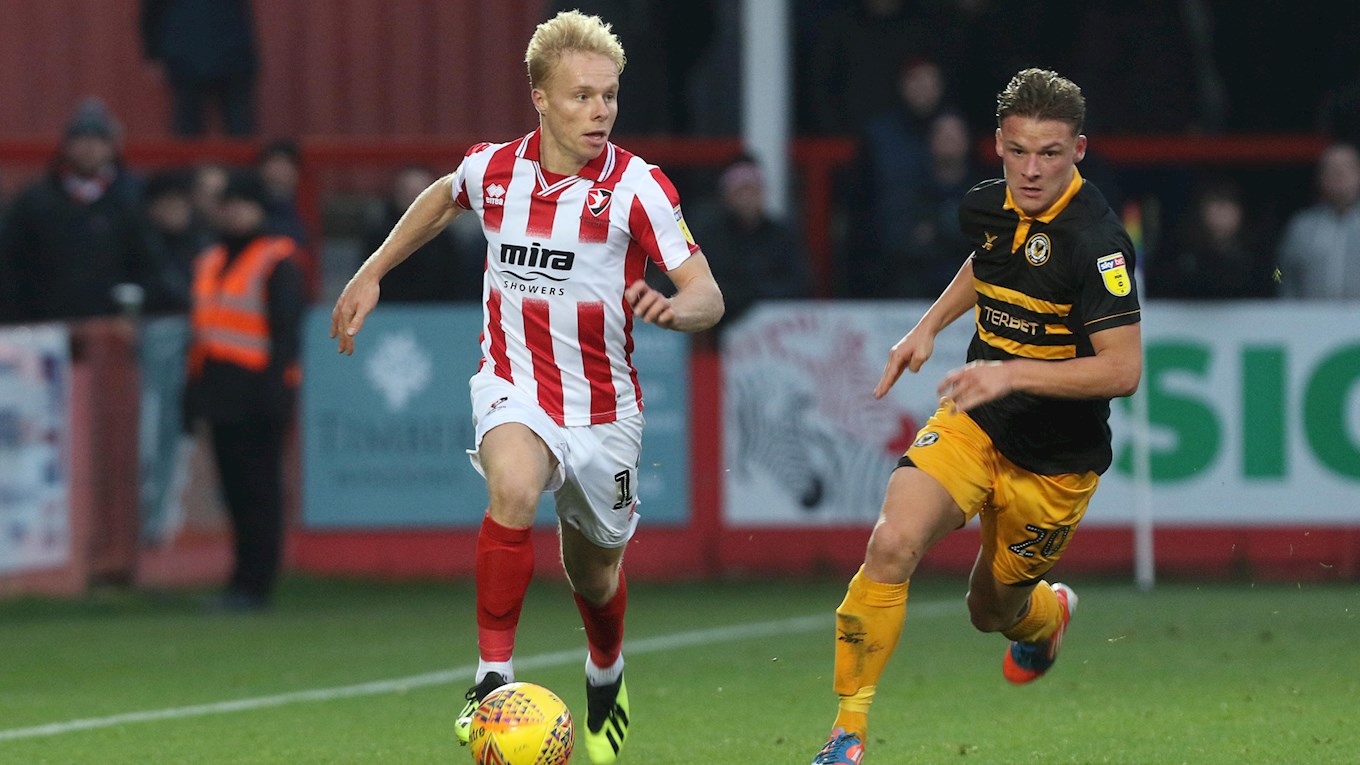 It was sixth time lucky for Cheltenham Town manager Michael Duff as he finally secured his inaugural success at home in League Two thanks to a 2-1 victory over the Exiles at the Jonny-Rocks Stadium.

It was a contest that County never really got going in until it was ultimately too late, as Cheltenham used their domination on proceedings to secure their first home league victory of the campaign.

Newport-born Ryan Broom was a constant menace throughout the contest and after strikers Luke Varney and Tyrone Barnett spurned glorious chances from his crosses, centre-back Will Boyle took matters into his own hands and powered a header inside the near post.

That goal came on 18 minutes and barring a miraculous save from Scott Flinders to deny a bullet Fraser Franks header from Dan Butler’s corner, the Robins continued to control the ascendency and doubled their advantage a minute before the interval.

Left-back Chris Hussey decided to venture forward this time having left Broom to do the work for most of the first-half, twisting and turning his way into a shooting area and when Joe Day was caught out by a divot and spilt the attempt, Barnett made County pay.

Once again, the Exiles looked a completely different entity in the second-half but despite getting a foothold in the game, struggled to create chances until five minutes before the end when Boyle was adjudged to have felled Mickey Demetriou inside the area and they had a penalty.

Demetriou’s spot-kick went wide but the side didn’t let their heads drop too much and they made the contest interesting with a minute to go when Antoine Semenyo volleyed home from a Mark O’Brien flick-on.

Mike Flynn said: “I’m going to take it on the chin today because it was my fault that we lost the game. I picked the wrong team first-half and I’ll take the blame for that. It’s my fault.”

Mark O’Brien added: “We know exactly what we are capable of from start to finish in a game and today we just weren’t quite at it. We’ll sit down, reassess what went on and push on from there.” 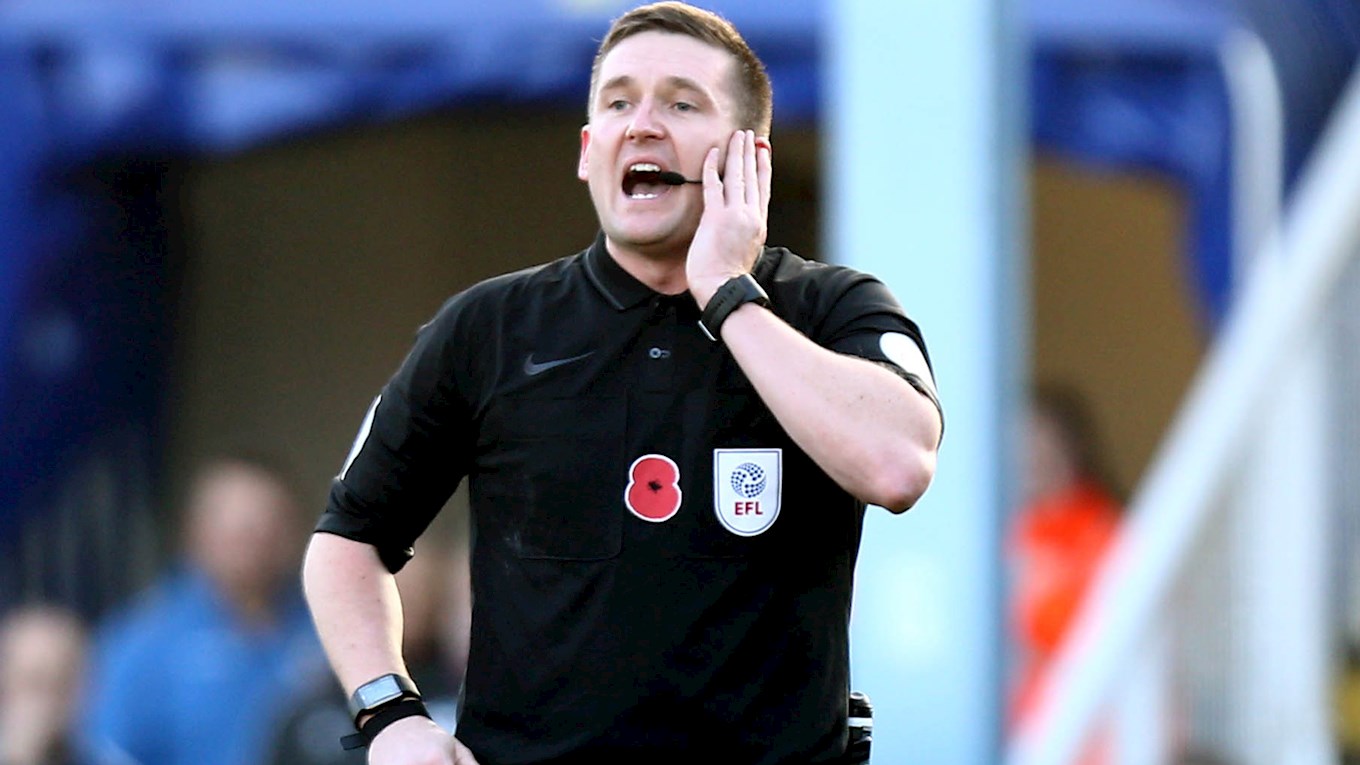 Collins is currently embarking on his eighth season as a Football League referee having officiated his first game in League Two on 6th August 2011 as Gillingham secured a 1-0 home victory over Cheltenham Town.

So far this season he has only refereed 10 matches, giving out 27 yellow cards and one red card, including two in his first game of the campaign as Cheltenham Town secured an away victory at Northampton Town.

Two matches have passed this season without Collins going to his pocket – Shrewsbury Town’s victory over AFC Wimbledon on 3rd November and MK Dons’ draw with Tranmere Rovers on 29th September.

That follows on from refereeing a total of 15 games during the 2017/18 campaign, a season in which Collins brandished 50 yellow cards and one red card throughout the entirety of the campaign. 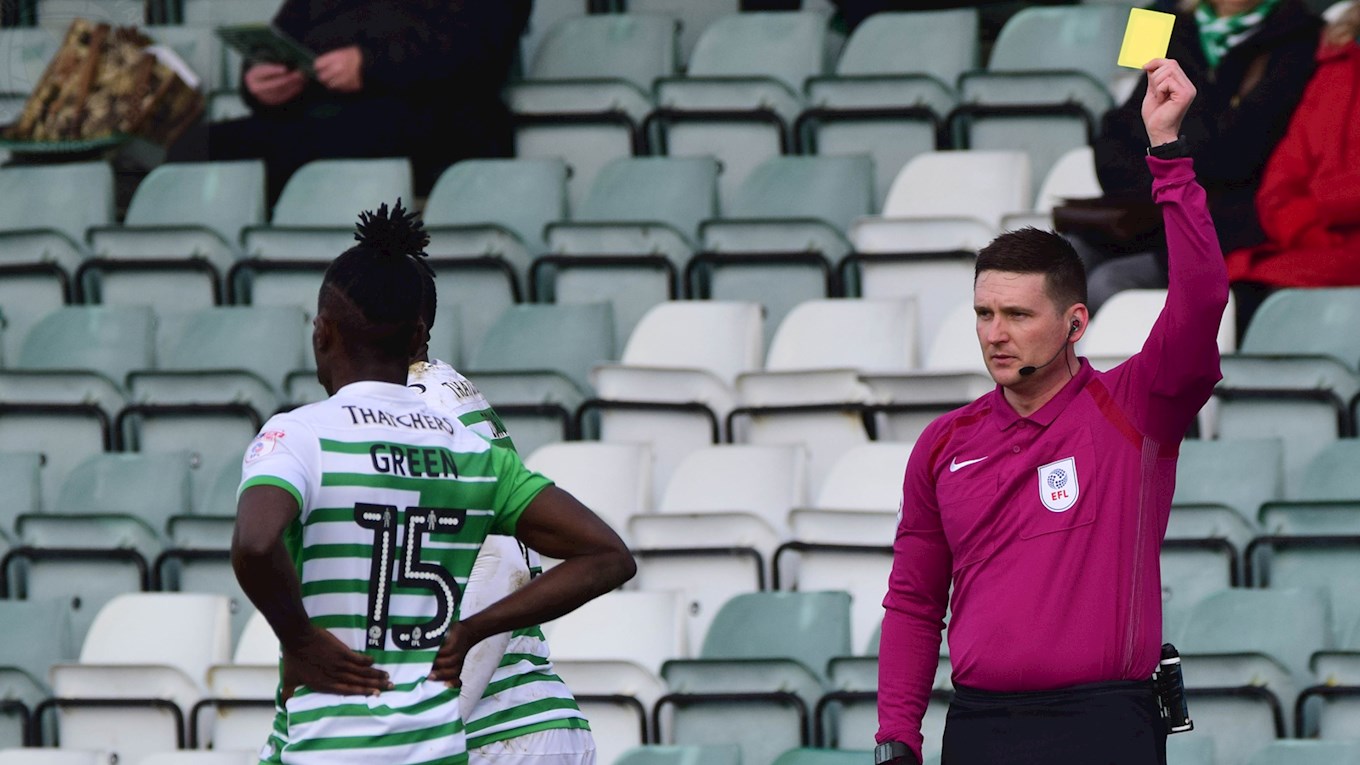 Hicks has refereed a match involving Newport County AFC on eight previous occasions in League Two so this will be the first time he has presided over an Exiles cup match. County have a strong record in games presided over by Hicks, winning five, drawing two and losing the other one.

Last season, he refereed one County match and it was one of the victories as the Exiles secured a 2-0 success at Yeovil Town on 10th March 2018. Joss Labadie and goal scorer Paul Hayes were both booked – as was Francois Zoko for the hosts.

In the 2016/17 ‘Great Escape’ season, one more fixture was overseen by Collins – the 2-1 away defeat at Wycombe Wanderers on 2nd January 2017. Darren Jones, Jennison Myrie-Williams and goal scorer Mark Randall were all cautioned.

Again it was just the one County game for Collins in 2015/16 – this one coming at Rodney Parade as a slender 1-0 victory was secured over Carlisle United on 13th February 2016. On this occasion, Jones, Byrne and Alex Rodman found their names in the book.

Then came the 1-1 draw with Cheltenham Town at Rodney Parade on 13th March 2015. No bookings for County. That was swiftly followed by the 2-2 draw with Hartlepool United on 3rd April 2015. Sean Jeffers and Byrne were both shown yellows.

In County’s inaugural season back in the Football League, Collins this time refereed two matches involving the Exiles, starting with the 1-0 success over Bristol Rovers. No bookings for County as they won the first competitive Severnside derby for 27 years.

That just leaves the 3-1 home triumph over Southend United on 27th October 2013. No bookings for County, with the goals coming courtesy of Conor Washington, Andrew Hughes and Ismail Yakubu.