Graham Williams has been a Newport County AFC supporter since the age of 12 and he's been swept away in all the excitement which has been building around the Club over the past few months.

After an incredible performance against Premier League big boys Tottenham Hotspur at Rodney Parade, the Exiles earned themselves a high-profile replay at Wembley Stadium on Wednesday evening.

Graham had been looking forward to the replay and so the Royal Gwent Hospital nurses on ward C7 East decided to help him celebrate the match.

When your 80yr old patient has supported @NewportCounty since he was 12 of course you help him celebrate Wembley today from the hospital his message is shout loud enough for us to hear you!! ⚽️❣️@AneurinBevanUHB @argusoncounty pic.twitter.com/ATXRAZDXrO

One of the ward's nurses, Donna Wigmore, explained: “As Graham is such an avid supporter, our staff decided to decorate part of the ward with Newport County pictures and everyone wore Newport County stickers to celebrate their rise to Wembley.  As he wasn’t able to watch the match, we made sure Graham could listen to it on the radio."

Graham Williams a patient on C7 East at the Royal Gwent Hospital is Newport County's biggest fan!!! The amazing nurses are helping him cheer on the boys at Wembley tonight. Good luck @NewportCounty !!! pic.twitter.com/3MwDOlABxQ

The day after the match, the Hospital contacted the Club to ask if they could help round off a really special week for Graham and come and visit him at the hospital.

This afternoon, Manager Michael Flynn, midfield Tom Owen-Evans and striker Marlon Jackson made their way to the Royal Gwent Hospital to visit Graham and thank him for his support!

We were delighted to be able to arrange this surprise visit for our patient Graham, who is a massive Newport County fan.
Manager Michael Flynn and players Marlon Jackson and Tom Owen-Evans chatted to Graham about the many years he has supported the club. https://t.co/dPW1eVspYG pic.twitter.com/ZeuGZolV8i

Graham said: “I was so shocked when I saw the manager and some of the team had come to visit me, I couldn’t believe it.  It’s made my day!” 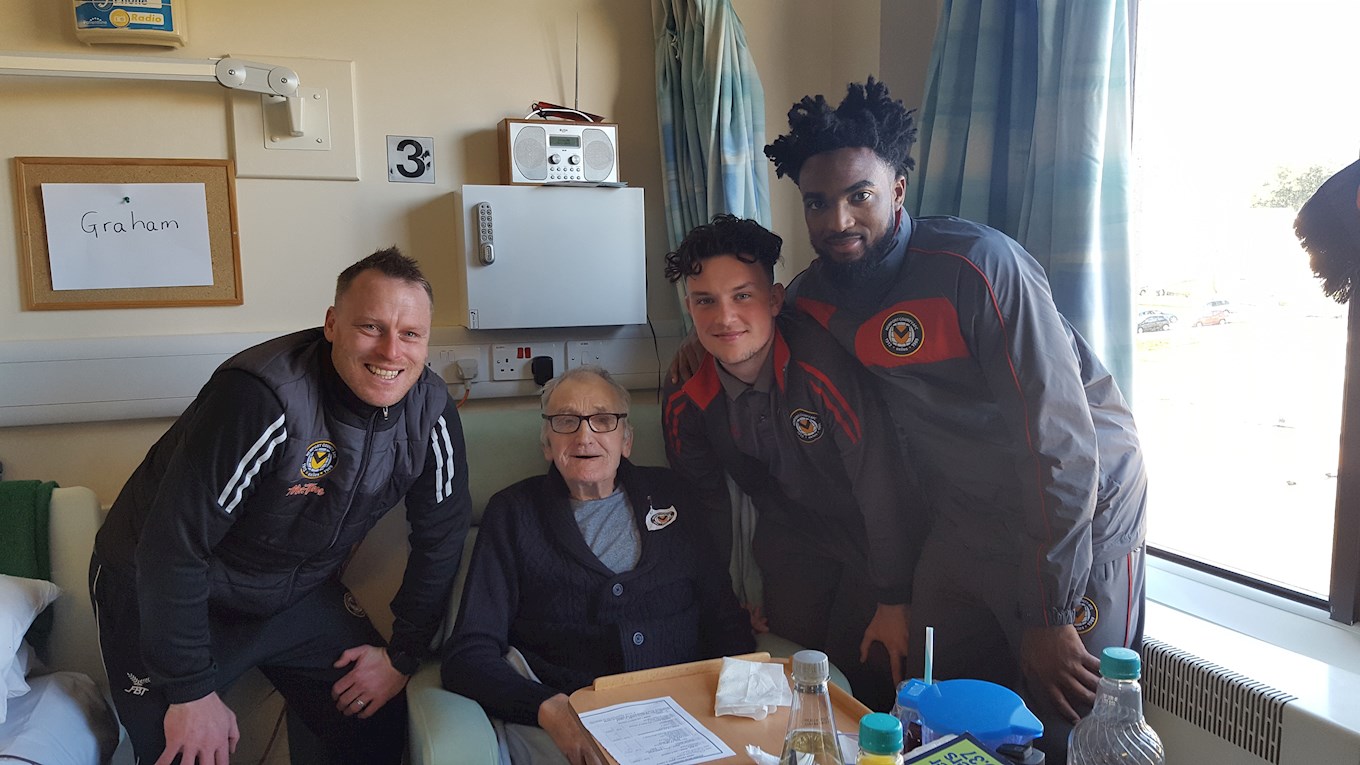 Manager Michael Flynn said:  "It’s great to get out and meet supporters like Graham.  He was great and his nurses were fantastic. We've been very priviledged this week to test ourselves against some of the best players in the world in one of the best stadiums in the world and it's important at times like this to give as much back as we can.  If a visit from us can make just one person smile, it’s worth doing.  Things like this are what this Club is about: One Club, One Community.”