It is back to the all important League tomorrow as we welcome near-neighbours Forest Green Rovers. Take a look below at what you are going to be reading about inside the matchday programme!

We look at the visit of Prostate Cancer UK. Volunteers will be collecting money outside the ground tomorrow afternoon and with your generosity will be raising money to beat adisease that kills one man every 45 minutes in the UK.

Will Pritchard reports on the first match of February for the U18s Academy Side, as the Young Exiles faced a tough challenge away at neighbours Cheltenham Town. 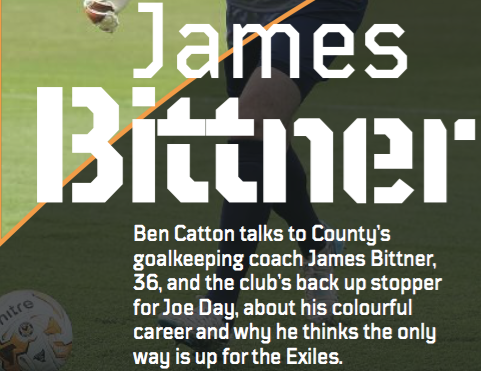 This week, Ben Catton sat down with Player/Coach James Bittner.  James speaks about the team's current form, his career so far and also how he was almost a striker - scoring 67 goals in one season in his early youth career!

Club Journalist, Ryan Robinson, re-lives the perfect start to 2018 and the victory over Exeter City in the Sky Bet League 2.

Elsewhere in the programme, he talks us through the historic 2-1 Emirates FA Cup victory over Leeds United.

The Club's Chief Scout tells us about his week and gives us a little insight to our visitors Forest Green Rovers as well as how we prepared for the Spurs Emirates FA Cup matches, both home and away!

In the ever-popular, Today's the Day article, Phil Tanner looks at a draw for the Exiles when they played Doncaster Rovers away back in 2013. Graham Westley was watching from the stands and it was the final game before he took over as manager of Newport County AFC.

Chris Shingler's Amber in the Attic takes us back to a season-changing victory for our championship-winning Newport AFC side, from the 1994/95 Beazer Homes League, a match against our nearest league rivals Forest Green Rovers.

There's still time to get your tickets for tomorrow's match vs Forest Green Rovers.