Where would Newport County AFC be without its supporters? The 2018/19 kit launch saw the club take a vital step towards the new season. People from all branches of the Newport County AFC family were invited to take part in the unveiling of the kit as the club looks to unite everybody under its new motto of #OurJourneyContinues.

Here, meet some of the supporters that were invited to the 2018/19 official Newport County AFC photoshoot and the reasons for their selection. 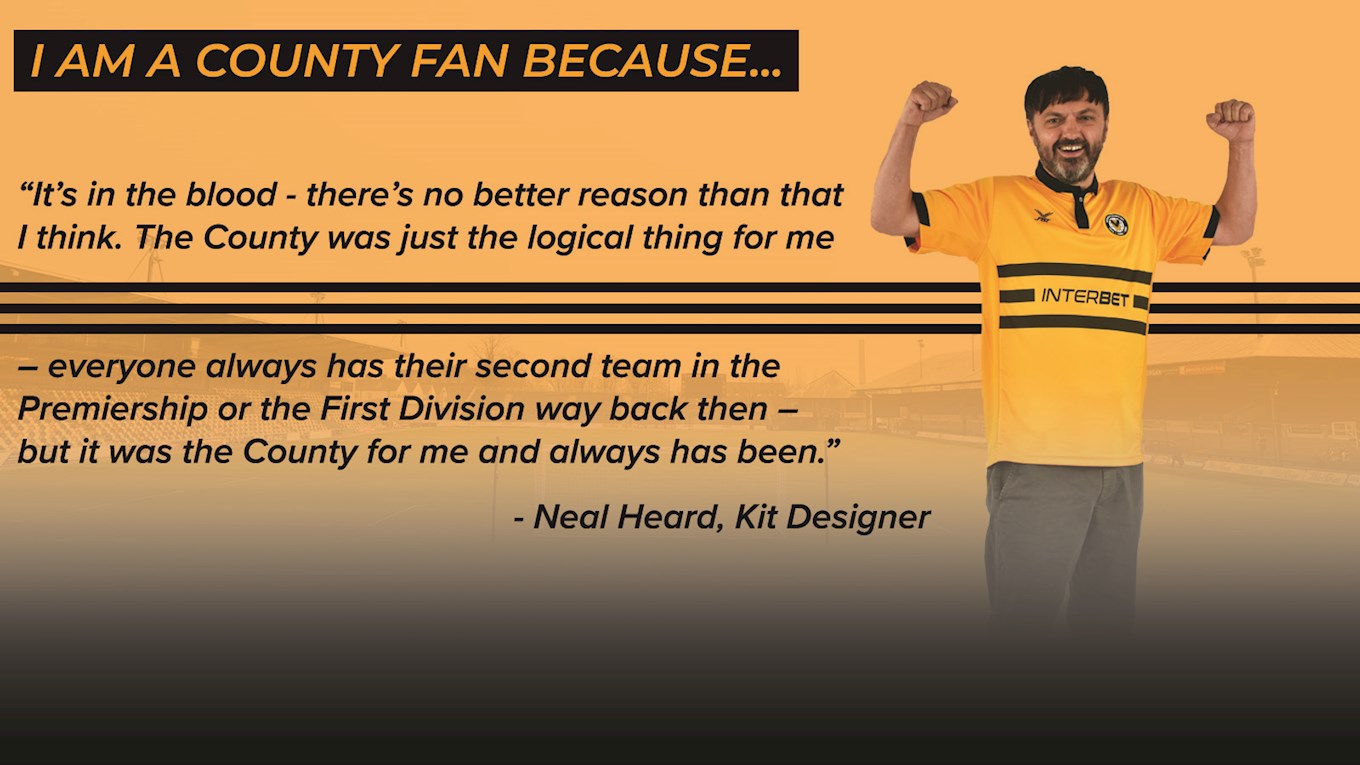 The brains behind all three iconic kit designs for the 2018/19 season, County supporter Neal Heard delved deep into the club’s history to help with the designs.

The prominent three-striped design that features on both the home and away shirts was specifically chosen by Neal so he could pay homage to the club’s best season in terms of league performance.

County won promotion to what is now classified as the Championship following a superb 1938/39 campaign and the kits worn that season represent a striking similarity to the kits that Neal has updated for the club to wear next season.

“For me, designing the kit was an opportunity that I jumped at,” Neal said.

“I would say that I live and breathe football shirts, but I also look at them in terms of how they cross over into popular culture and how they particularly link with fashion.

“It felt like a brilliant opportunity when the County kind of approached me and asked if I would be interested in helping with the kit design.”

Neal has been involved in kit design since a young age and pulled together all of that experience in working for companies like Nike when coming up with some options for the third kit.

Those options were then voted on at a Supporters Meeting – with the winning design receiving over 50% of the 1,200+ votes cast.

He continued: “I’m very aware of how the design process of football shirts is changing and it’s a case of going back to being graphical – you only have to see the Nigeria kit at the World Cup to see that.

“The third kit was an attempt to bring in that kind of graphical movement which I believe is coming back into football shirts. I wanted to give us our own bespoke kit – one that was relevant but also fresh.

“I’m really proud to have been asked by the club to help out with the kits and I’m really pleased with how they have turned out as-well.”

Alongside his various exhibitions and projects that he has lined up over the next 12 months, Neal will be continuing his own journey in parallel with the club and is targeting positive results in both aspects.

“The Journey Continues for me next season alongside the club,” he added.

“People say that I am an optimistic about the County but I’m not, I’m realistic. I’m going to say that we could even go up – I know it sounds crazy but Flynny has got this thing about him where he can bring out the best in players.

“There’s a real good team spirit here and a camaraderie around the whole environment. It sounds silly but because of the 38/39 kit, the anniversary of that kit and the part that I’ve played in it, I’ve just got a good feeling about the season.

“I’m chuffed to have made the kit for the County – the day we kick off the season at Mansfield Town and I see them come out in the kit that I designed, I’m going to be really proud quite frankly.”

That role with the club is the latest in an extensive line of similar jobs undertaken by Gareth, who believes his passion and commitment for the club stems from being bitten by the County bug at his inaugural game.

Gareth commented: “I remember it was Exeter City at home and I was in the Cromwell End. I think it was around 1976, that was my first game and I was hooked from them on.

“I joined the Supporters Club not long after that – myself and my wife were on the committee – and they were really good days.

“Unfortunately we all know what happened in 1989 but we reformed and had some more good days with the Supporters Club.

“My work progressed from there really. As you know, I am the matchday groundsman and it also includes doing the signage during the week.

“I’ve been involved in that side of things for a long time now and I would like to thank Tony Gilbert who originally got me involved in it.”

Gareth – who is pictured in the official home kit above – is more renowned for sporting quirkier designs when partaking in his matchday activations. And this individual style is why Gareth will be looking forward to wearing the third kit at away matches.

He continued: “The one kit I really like is the third kit actually. Although I might be getting a bit older now, I do like the retro look about it. It’s something different and that’s what we should aim to do as a club – show ourselves off to other supporters and teams.

“I think they’ve done really well with the third kit and I’m just waiting for it to come out now so I can buy one!”

Gareth has seen first-hand what it takes for a County side to get promoted and he believes that some of those characteristics are already being shown by the first-team.

He said: “No-one has seen the new signings play obviously but I think Mike Flynn has brought in a perfect mixture of youth and experience.

“My hope for next season is obviously the top-seven, the play-offs or maybe even the top three. I just want us to improve.

“We were able to improve upon the Great Escape with what we did last season and hopefully we can just keep on improving.” 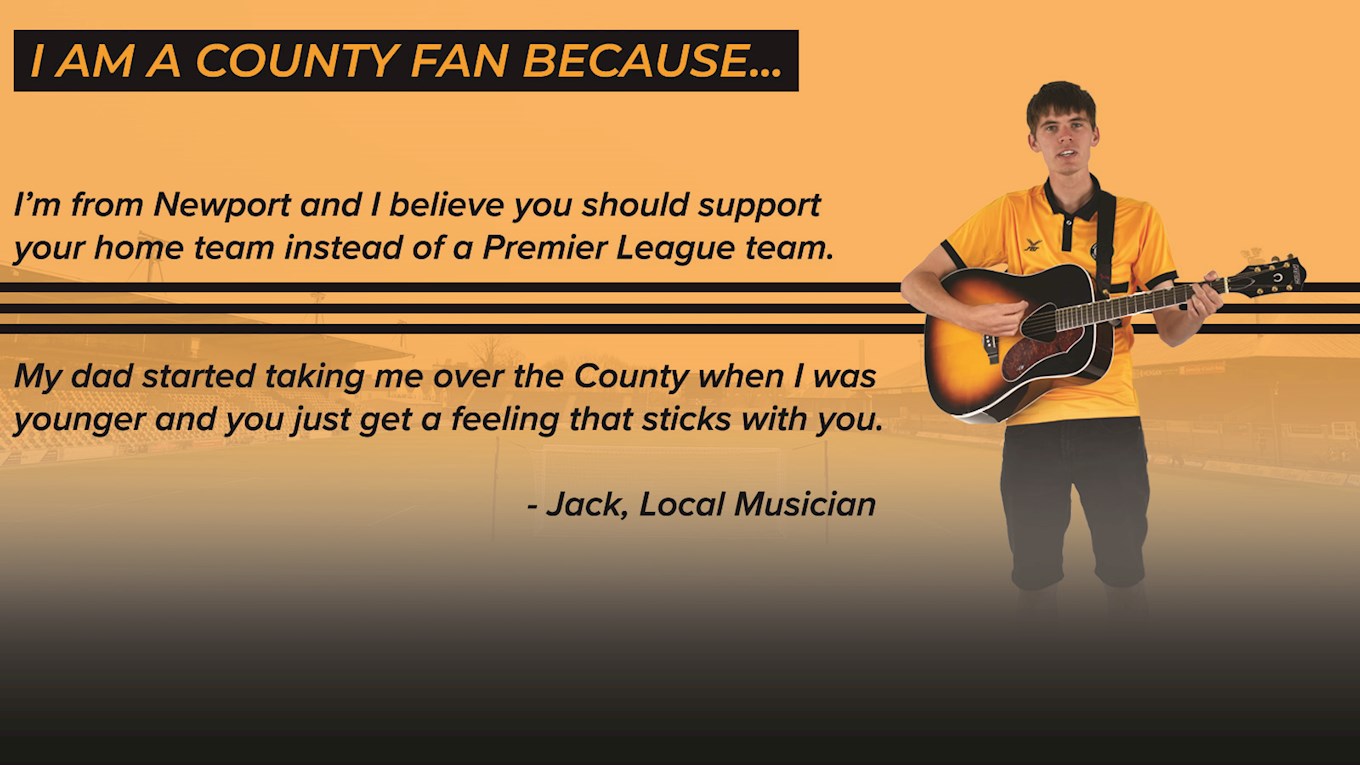 Jack Perrett’s music may be a familiar sound for County supporters on matchday as he often frequents the We Fight Any Claim Family Zone pre-match alongside some of his tracks being played in the stadium throughout the day.

Jack’s passion for both football and music led him to County from a young age – preferring to take his father’s advice of supporting your local team than selecting one in the top division of the English League system.

And he believes that linking so positively with the club in his journey of eventually becoming a full-time musician will ultimately pay dividends.

He said: “I would obviously love to make it as a musician. I’m currently working another job alongside doing my music but hopefully I can make my music a full-time career.

“It would be a dream for me to headline a gig at Rodney Parade.

“I also want to thank the club and Joe Crocker specifically for playing my music at the home games and for giving me the opportunity to put my name out there.”

Jack’s undying love for the club since an early age may also help explain his overall thoughts of the three shirts that he saw at the official 2018/19 kit photoshoot.

He said: “I really like the home kit. You just can’t beat an amber top and black shorts. That’s what I’ve always associated with the club since I’ve been supporting them so that’s my favourite.

“I do like all of the kits – the designs are great – but you really can’t beat the idea of an amber shirt with black shorts.” 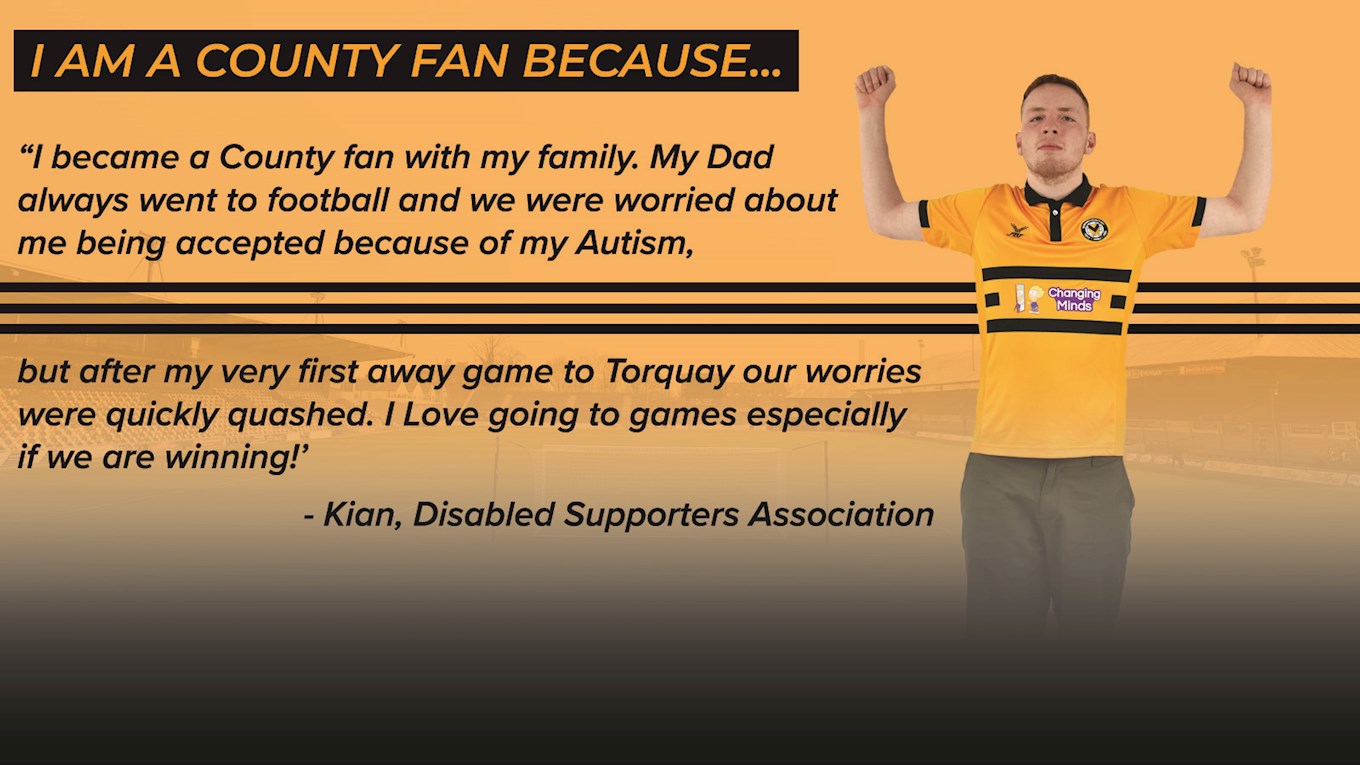 Kian’s own personal journey into becoming a County fan is the perfect embodiment of what the club are trying to achieve next season with it’s motto of #OurJourneyContinues.

His passion for sport – and particularly football – led him to County a couple of years ago and from there, his journey has led to the Newport County AFC Disabled Supporters Association being created at Rodney Parade.

The challenges encountered by Kian whilst trying to attend his first ever County match became the inspiration for the DSA’s creation, with his parents – Colin and Claire Faulkner – wanting to alleviate some of the problems they faced for both home and away supporters moving forward.

The establishment of the original group in 2015 has since gone from strength to strength, allowing supporters from all clubs the opportunity to watch matches at Rodney Parade in as much comfort as possible.

County’s DSA is now an integral part of the family within the club and it was mightily important for them to have an active role in last week’s photoshoot.

Explaining the decision to put Kian forward as the DSA’s nominee, a statement read: “The DSA committee took a vote to decide who would represent them at the 2018/19 Kit Launch.

“Kian won the vote by some margin and it’s not difficult to see why given that Kian is the reason the DSA was setup in the first place.

“It was the issues encountered by the Faulkner family when trying to attend Newport County AFC matches with Kian which highlighted for them a lack of proper system and set-up to support disabled County fans.

“As a result, Colin and Claire founded the Newport County AFC DSA which has been doing excellent work supporting disabled home and away supporters visiting Rodney Parade.

“Kian is the original member of the group and has just bought his 4th season ticket.  He watched every game, home and away, of the 2014/15 season and has barely missed one since.”

The DSA are always visible across the stadium on Match Day - arriving at the game an hour and a half prior to kick-off.  They are dressed in clearly marked hi-vis jackets and are easy to spot. One DSA member will always be stood at the Ticket Office if you need them.

For the new season, County’s DSA ambassadors will be Michael Flynn, Joe Day and Robbie Willmott. Club director Colin Faulkner and Claire Faulkner are the best contacts for issues concerning the DSA ahead of the 2018/19 campaign.

FIND OUT MORE ABOUT THE DSA