Newport County AFC will be looking for their third successive League Two victory when they entertain Macclesfield Town on Tuesday night. The Exiles could go joint top of the division should they win and Lincoln City lose, while the Silkmen head to Rodney Parade looking to kickstart their campaign after a slow start so far. 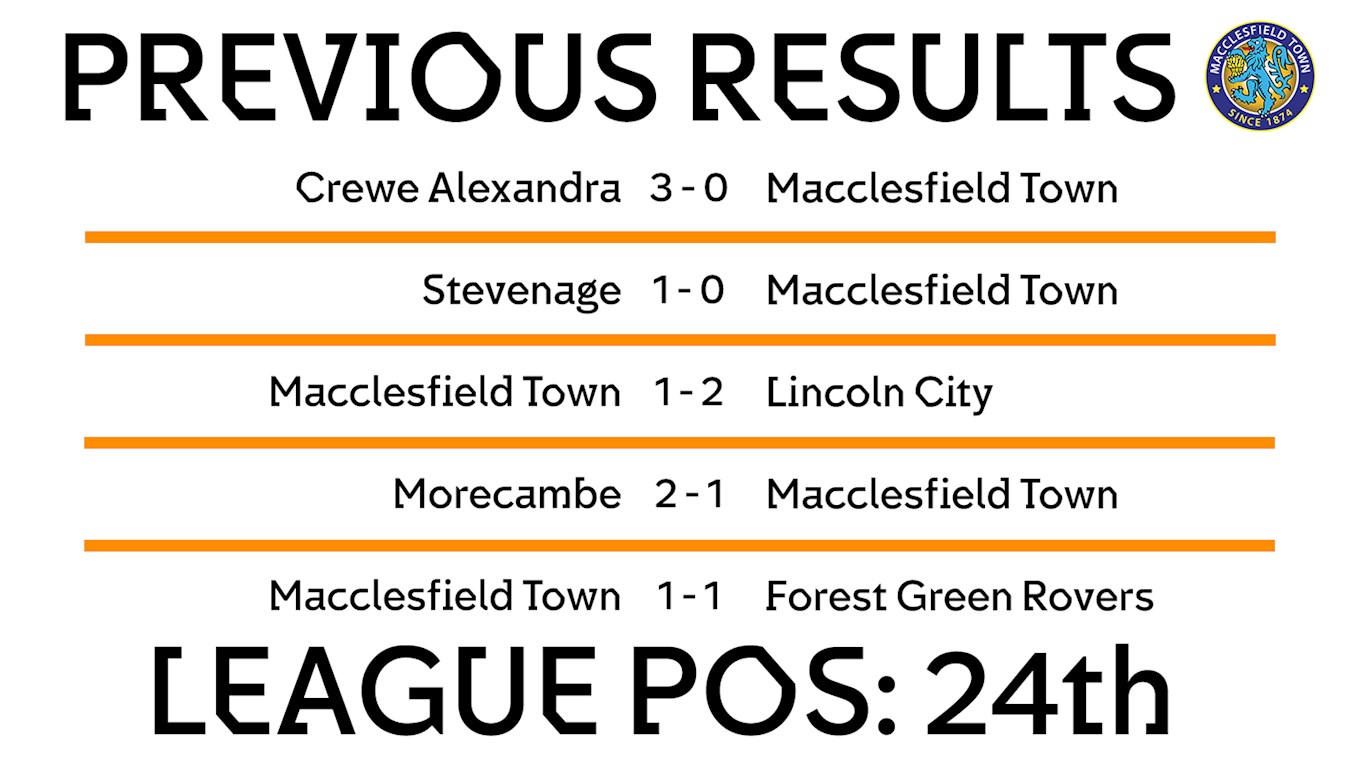 The only side in League Two yet to win a match, it’s been a horrible start to the season for newly promoted Macclesfield Town and they sit at the foot of the table having picked up just three points from their opening 10 fixtures.

In their last five league fixtures, only one point has been achieved, and that particular run starts with a comprehensive 3-0 defeat at Crewe Alexandra. Charlie Kirk opened the scoring and Jordan Bowery hit a double for the Railwaymen as they eased to victory in the Cheshire derby.

That swiftly became back-to-back league defeats as Stevenage secured a 1-0 home victory against the Silkmen. Danny Newton scored his first of the campaign to ensure the points stayed in Hertfordshire.

Macclesfield probably expected nothing from their home tie with league leaders Lincoln City and that is exactly what they got as they conceded late to lose 2-1. Jamie Grimes cancelled out Tom Pett’s early opener, but Jason Shackell kept the Imps marching with the winner three minutes from time.

Even at this early stage of the season, you just felt that it was a relegation six-pointer when the Silkmen travelled to Morecambe and the away side were left to rue Michael Rose’s dismissal as they suffered another 2-1 defeat. Danny Whitaker fired in a magnificent equaliser for Macclesfield, but the home side secured the points thanks to goals from AJ Leitch-Smith and Andy Fleming.

In their most recent match, the Silkmen did at-least stop the succession of defeats with a battling 1-1 draw at home to Forest Green Rovers. Dayle Grubb gave the visitors the lead just after the restart, but Macclesfield rallied for a point through Scott Wilson. 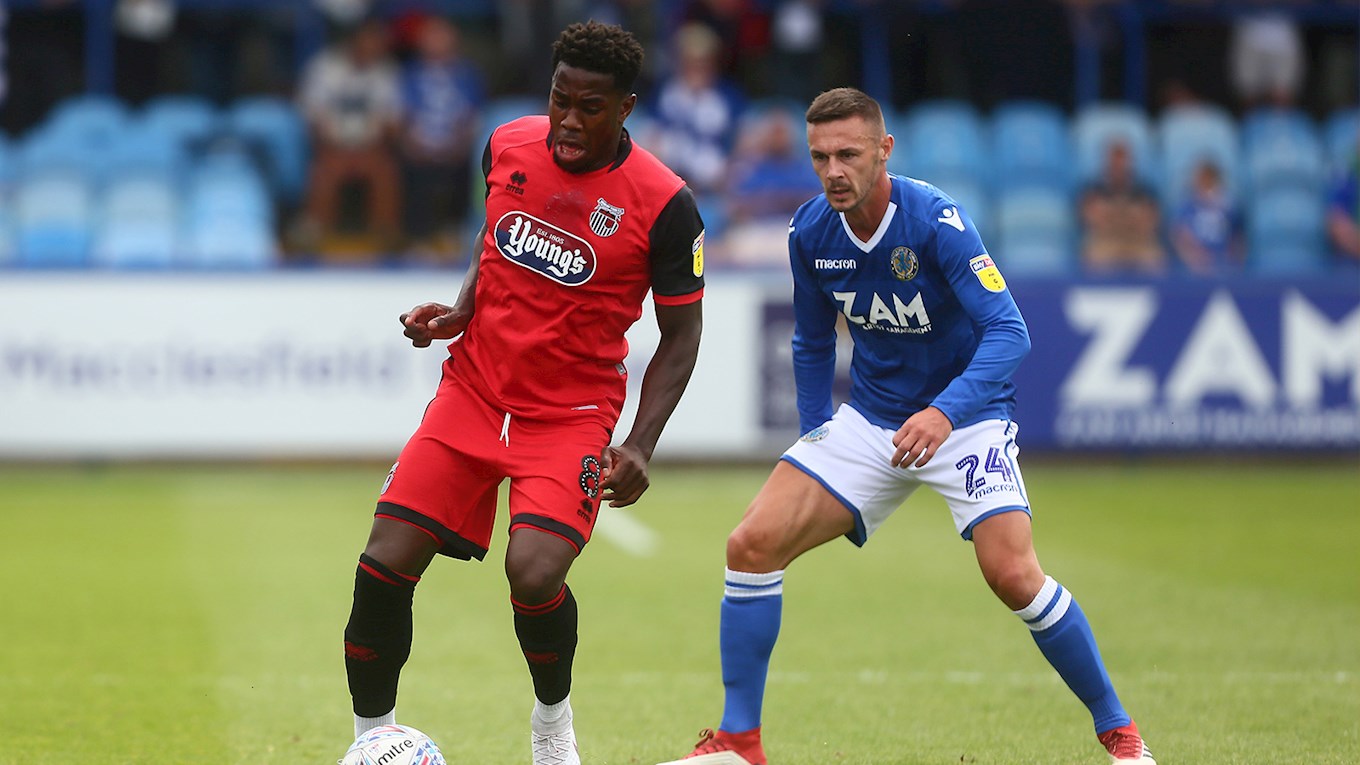 Macclesfield Town manager Mark Yates is currently undergoing an injury crisis and will be missing several members of his first-team squad for the trip to Rodney Parade.

Defender Michael Rose completes his three-match suspension having received a straight red card at Morecambe last month, whilst attacker Elliott Durrell is again expected to miss out having failed to make an appearance so far this season with a groin injury.

Midfielder Ryan Lloyd is another to have not featured this season with an ankle injury, whilst forward Jordan Ponticelli has only made one appearance for the Silkmen since joining on loan from Coventry City and is struggling with a foot problem.

Goalkeeper Luke Simpson (dislocated thumb) and forward Ben Stephens (hip) are still expected to be sidelined. Versatile defender Callum Evans is a doubt having been stretchered off against Morecambe.

One to Watch – Scott Wilson 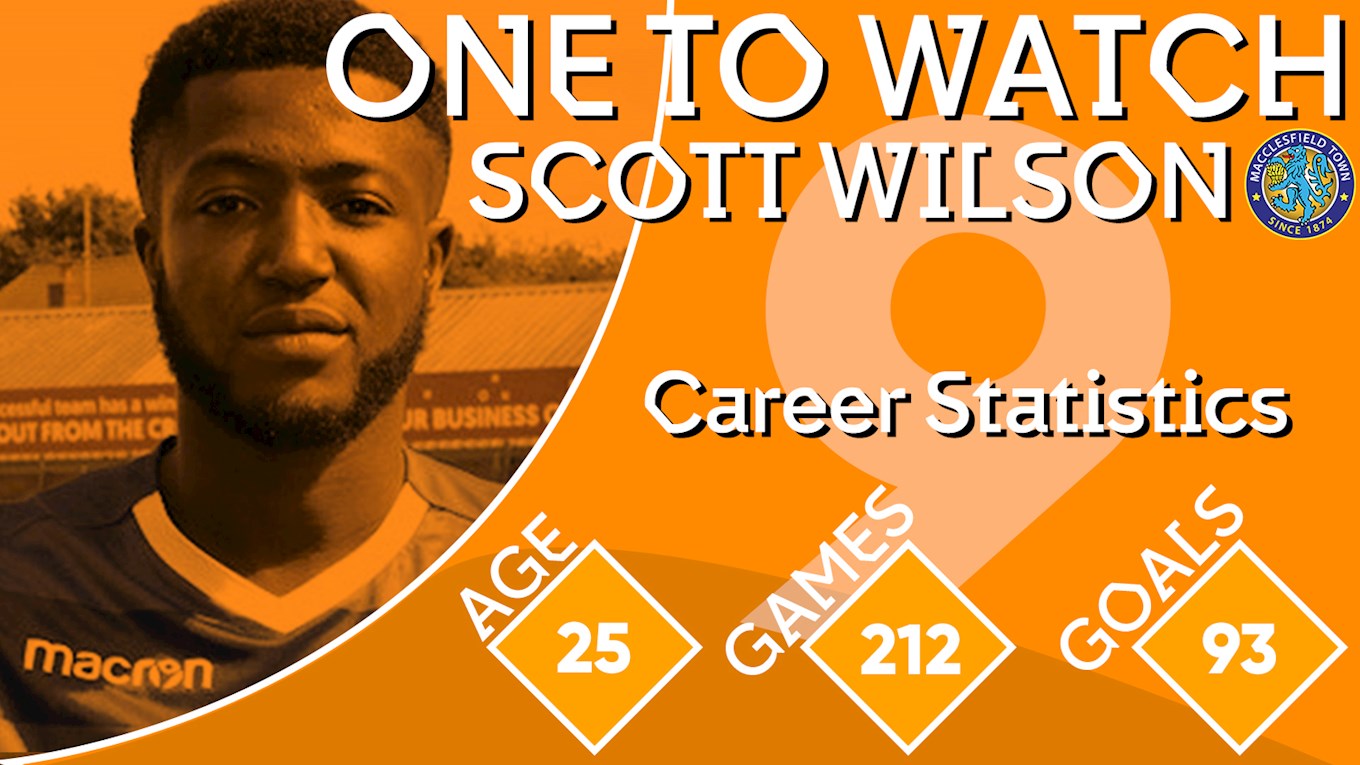 Having scored his first ever Football League goal on the weekend, attacker Scott Wilson will be hoping that springboards his season having failed to find the target in his previous eight appearances.

That is in stark contrast to Wilson’s debut season at the Moss Rose with the Silkmen, with the 25-year old steering the club to the National League title as top scorer with 14 goals from 36 appearances.

Before this season, Wilson had spent the entirety of his professional career in the non-league having failed to make the grade at Bristol City – a club he joined aged eight before getting released aged 16.

A decent stint with Filton College afforded him another shot at Bristol City but despite again impressing the youth and reserve teams, failed to make a competitive first-team appearance.

Wilson entered the non-league circuit following that second release and spells for Gloucester City, Cinderford Town and Yate Town soon followed for the attacker. Grabbing over 30 goals at Yate saw him on a six-week trial with Bristol Rovers, but again to no avail, so moved on to Gloucester City again then Paulton Rovers.

A spell at Weston Super Mare, where he netted 24 times in the 2015/16 season left Wilson with a couple of options, most notable Eastleigh in the National League or move to Sweden to join Graham Potter at Ostersunds.

He joined the Spitfires for the 2016/17 campaign and despite playing under four different managers, still managed 36 goals and eight goals, going on to join Macclesfield ahead of last season. 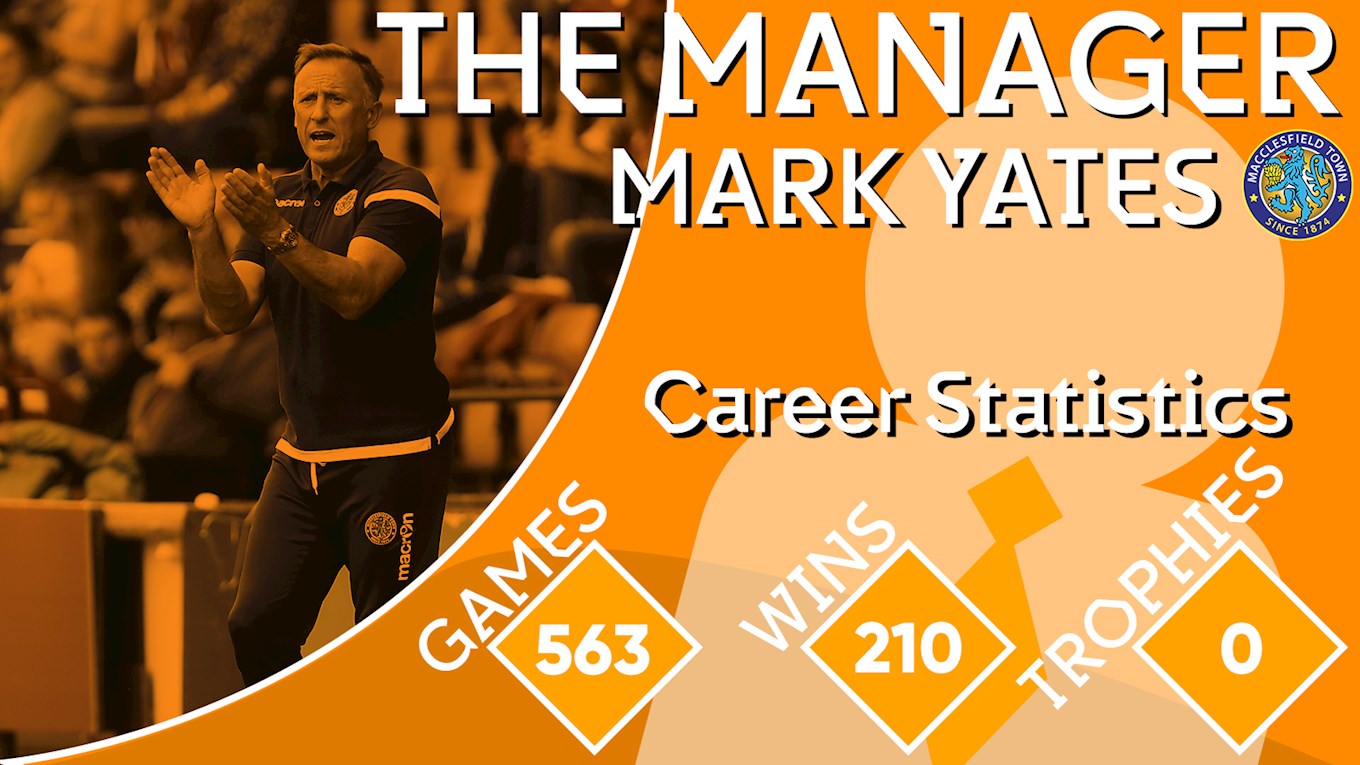 It’s not been the easiest of starts to life in the latest managerial position for vastly experienced 48-year old Mark Yates.

His side have failed to win a game in normal time this season, both their Carabao Cup victories this season came on penalties, as did their success in the CheckaTrade Trophy, and they didn’t exactly have the best of pre-season schedules either.

This is the fifth managerial rold held by Yates and he has had varying levels of success in the previous roles in non-league and the Football League.

Having made the decision to hang up his playing boots at the end of the 2004/05 season, Yates was appointed first team coach at Burnley before going back to former club Kidderminster Harriers as manager on 6th January 2006.

He steered the club away from the possibility of successive relegations in his first season before making a trip to Wembley in his second season for a 3-2 defeat to Stevenage in the FA Trophy.

Those performances at Conference level were enough for Cheltenham Town to make a move just before Christmas 2009, with Yates getting his first crack at the Football League as a manager.

Cheltenham reached successive League Two play-offs in 2012 and 2013 but could never aspire to the third tier, losing in the final to Crewe Alexandra then the semi-finals to Northampton Town, and was sacked after a poor start to the 2014/15 campaign.

He returned to League Two just under a year later with Crawley Town but that wasn’t the most fruitful of spells and he couldn’t last a full 12 months and was sacked before the end of the campaign.

Yates returned to Kidderminster for a few weeks to coach the U23s in the summer of 2017, before moving into the National League to take over at Solihull Moors. At the time of his arrival, the club were bottom of the table but he led them to 18th, alerting Macclesfield who moved quickly upon John Askey’s departure for Shrewsbury Town. 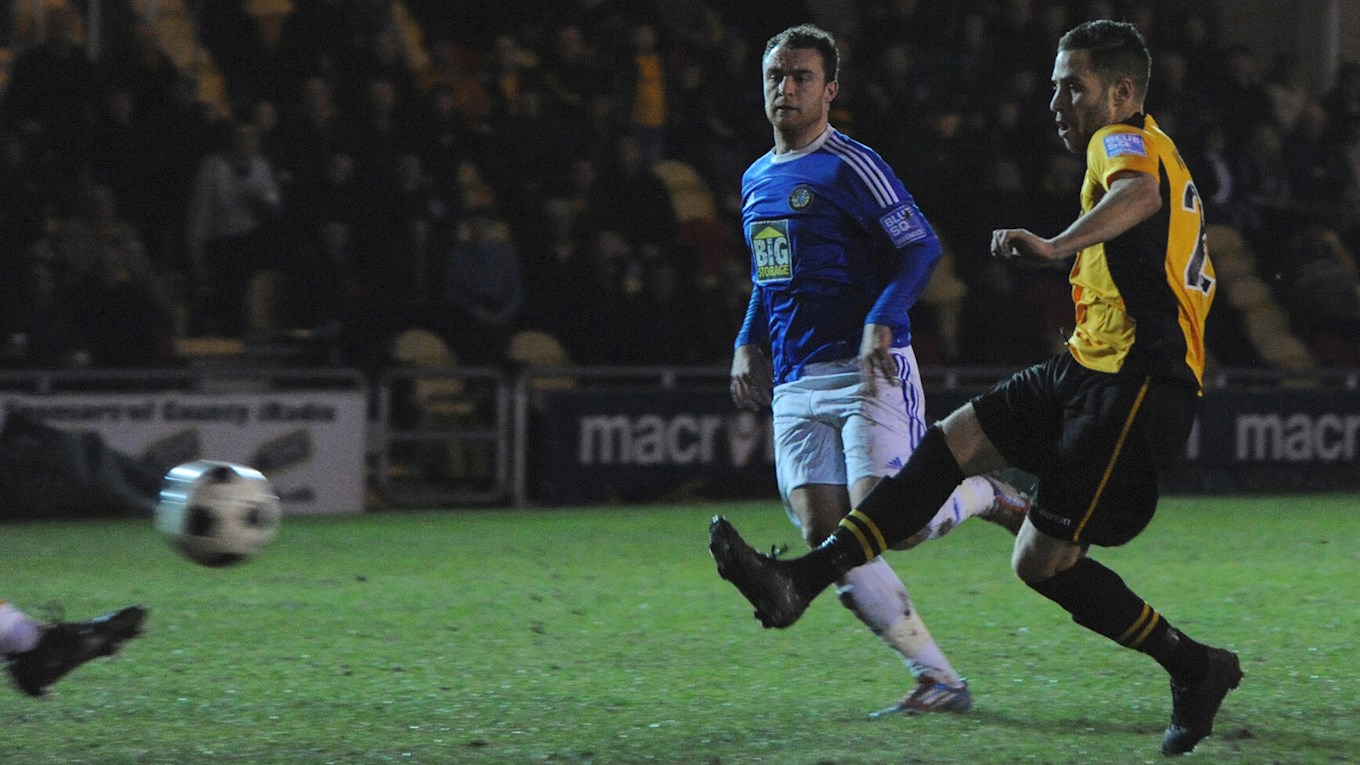 Newport County AFC have never met Macclesfield Town in a Football League fixture but did encounter the Silkmen twice during the 2012/13 promotion campaign.

The first of those meetings came on 13th October 2012 as part of ‘Non-League’ day. County were three points clear at the top of the table at the time; Macclesfield were ninth so the game was given the prime spot on the day.

That meant a 12:30 kick-off in Cheshire and an even earlier start to reach the Moss Rose on time. A total of 140 County supporters did make the trip that day and they would have seen a 1-1 draw against the Silkmen.

Exiles defender Tony James put County in-front just before half-time after reacting quickest amidst a host of bodies in the box following a Jake Thomson free-kick, a lead the Exiles kept until the 81st minute when Matthew Barnes Homer headed home the equaliser.

Watch the match highlights from the Moss Rose.

In the reverse fixture at Rodney Parade, County had to recover from conceding an early goal as they moved up to third place in the table with a convincing 4-1 victory on 11th April 2013.

Jay Burgess pounced on a rare County defensive error to open the scoring in the third minute, although the Exiles responded to amass a healthy half-time lead.

Christian Jolley drew County level with a close-range effort, before Andy Sandell’s penalty and Robbie Willmott’s decisive finish sent the Exiles back to the dressing rooms with a two-goal advantage. Willmott added the fourth late on.

Watch the highlights thanks to Glyn Neale’s video. 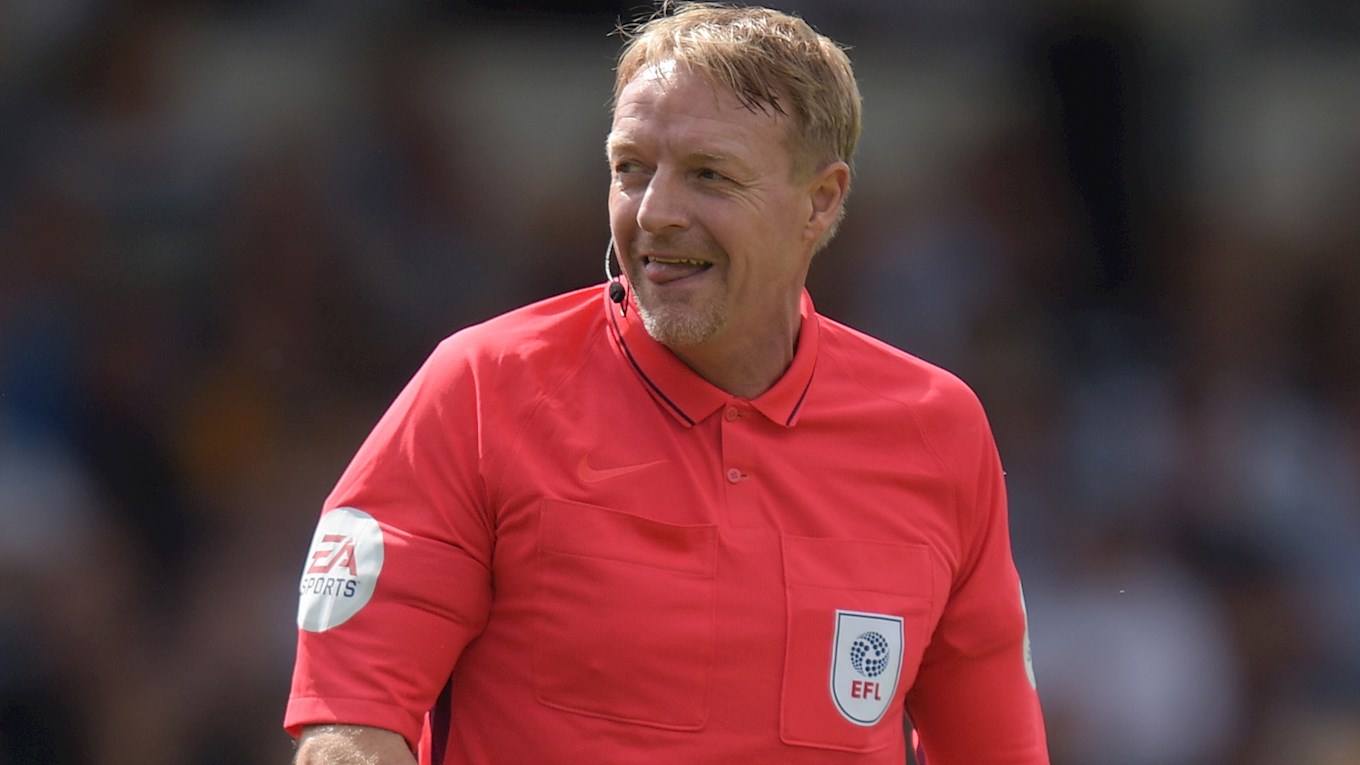 There has been a late change of referee for this fixture as Trevor Kettle has come in to replace Robert Lewis.

A highly experienced referee at this level, Kettle has officiated in the Championship on numerous occasions over the years, alongside being a League Two referee since the 2003/04 season when he first oversaw a home victory for Swansea City against Bury on 9th August 2003.

He has refereed 11 games so far this season, giving out 32 yellow cards and one red card, including three yellows on the opening day of the season as Port Vale comprehensively beat Cambridge United 3-0.

There has been two occasions where Kettle has failed to brandish a single card of any colour, those coming as Yeovil Town and Exeter City went to penalties in the CheckaTrade Trophy and Wycombe Wanderers beat Fulham U21s in the same competition.

His sole dismissal this season came in the game that he gave out his season high number of yellow cards as Burton Albion’s Jamie Allen was dismissed alongside seven yellow cards in the Brewers’ defeat at Oxford United.

That follows on from refereeing a total of 37 games during the 2017/18 campaign, a season in which Kettle brandished 130 yellow cards and five red cards throughout the entirety of the campaign. 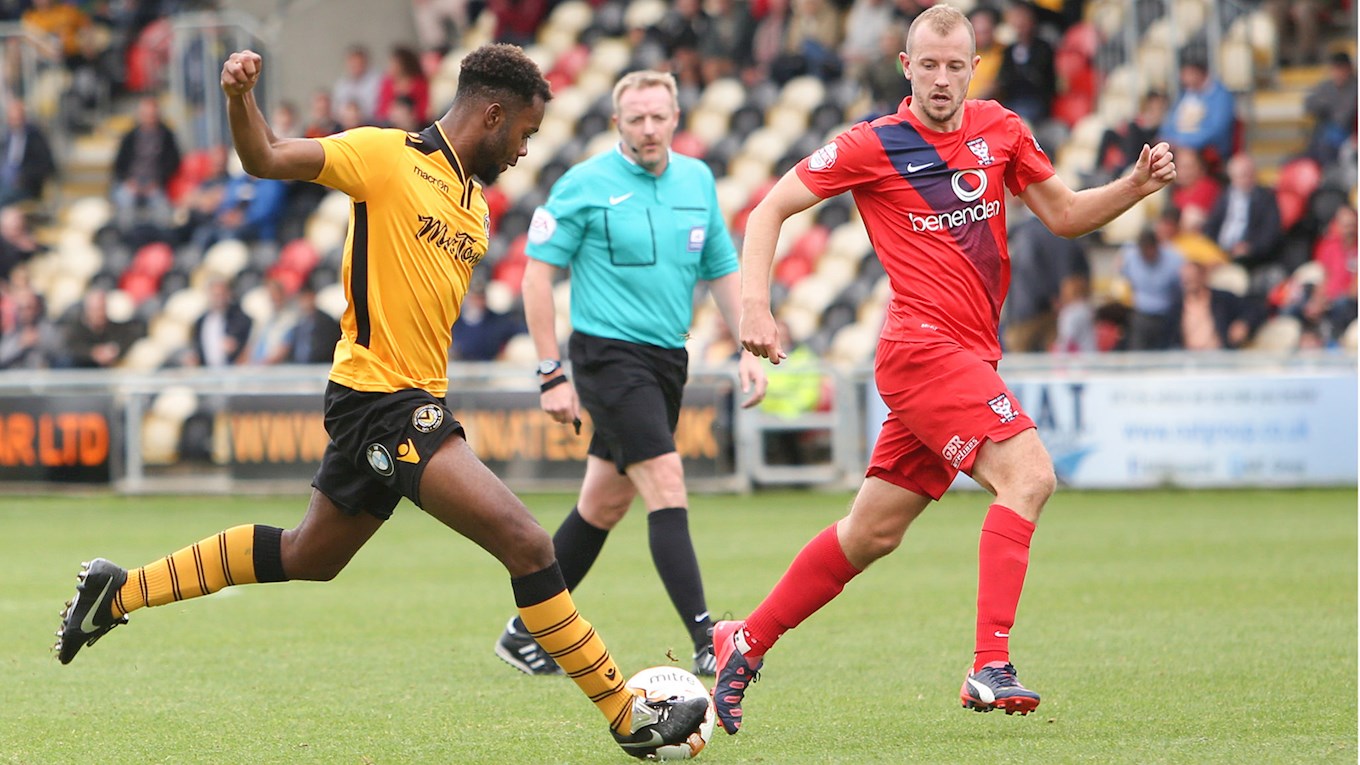 Newport County AFC will be looking to rewrite the history books against Macclesfield Town after an awful previous history under referee Trevor Kettle. He has refereed the Exiles on three previous occasions, but they have come out on the end of 3-0 defeats every single time.

It has been over fours years since Kettle last officiated a match involving the Exiles and it came when York City stormed to victory at Rodney Parade on 5th September 2015. Danny Holmes was dismissed although the game was already gone at that point, while Matt Partridge, Scott Barrow and Aaron Collins were all booked.

In the 2013/14 season, Kettle refereed another two County matches and the score lines were exactly the same in favour of the opposition.

On 10th December 2013, County were knocked out of the Johnstone’s Paint Trophy by Darren Ferguson’s League One outfit Peterborough United. Robbie Willmott and Andy Sandell were booked as part of four cautions in total.

Then, County again suffered a 3-0 reverse on 15th February 2014, this time away at Hartlepool United. Harry Worley and Tom Naylor were given yellow cards on that particular occasion.

Other League Two fixtures that day (All 7:45pm kick-offs)