Newport County AFC will be looking to ascend back into the League Two automatic promotion places when they host Morecambe on Saturday. The Exiles will also look to defend their superior form at Rodney Parade this season, while the visitors will travel down intent on keeping their unbeaten record in South Wales alive with a positive result that would also keep them above the drop zone.

Here, you can find all the facts and statistics ahead of this League Two fixture… 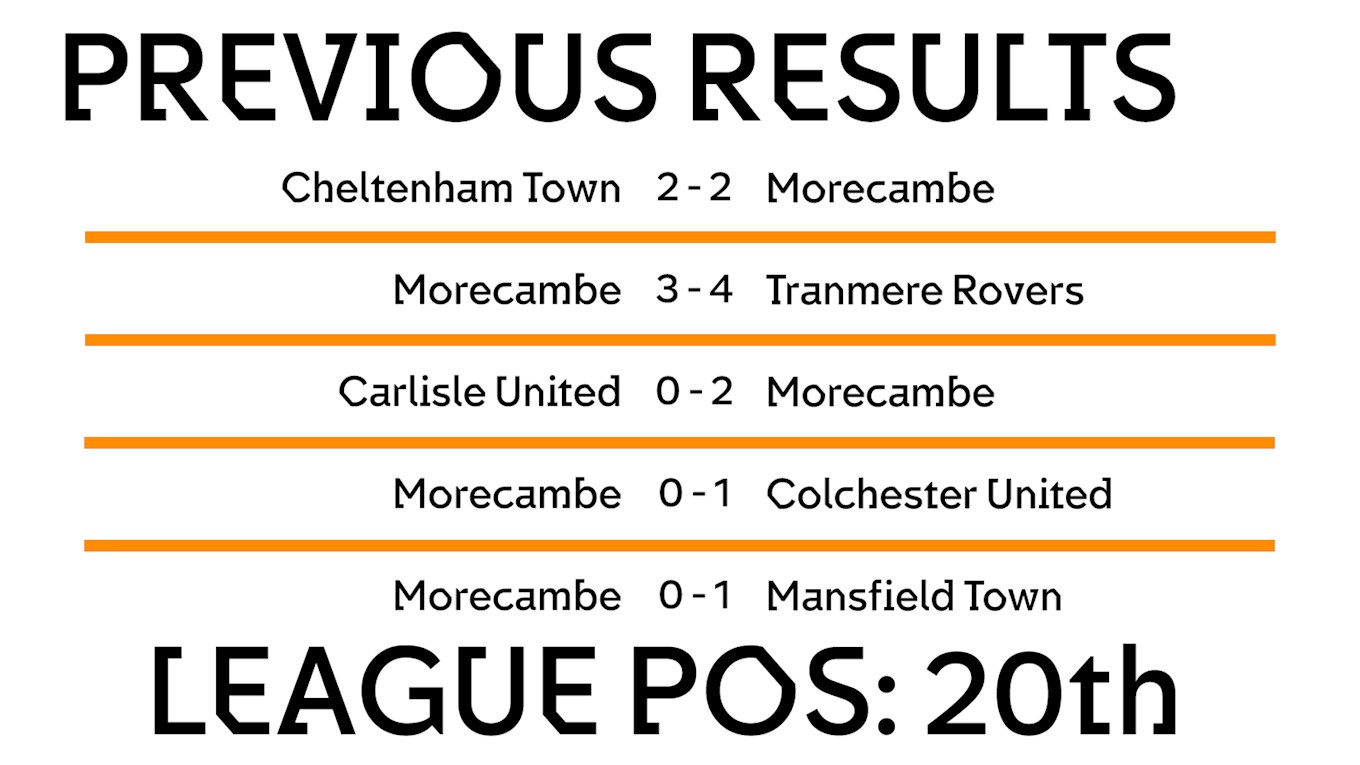 After being many people’s favourites for relegation this season and getting heavily beaten on the opening day of the season by Crewe Alexandra, Jim Bentley’s Morecambe side have certainly showed tremendous character to bounce back and pick up some notable results.

Their results don’t look the best when you look specifically at their last five results in League Two, only amassing four points despite having three home fixtures, but their away form will be a cause for concern for County on the weekend.

The recent run starts on October 2nd as they secured a more than deserved 2-2 draw at struggling Cheltenham Town. They were probably unlucky not to get more from the contest as ex-Robin Jordan Cranston saw his early effort cancelled out by Luke Varney, before Rhys Oates restored the advantage. They couldn’t hold on, however, as Varney drilled home in stoppage time – sparing the blushes of Tyrone Barnett who had earlier missed a penalty.

In their next match, Morecambe were edged out in a seven-goal thriller at home to Tranmere Rovers in what could be the game of the League Two campaign so far. Oates scored again to put the Shrimps in-front, but they soon found themselves 3-1 behind after goals from Ollie Banks, Harry Gilmour and Jonny Smith.

Again showing tremendous character, Morecambe levelled thanks to goals from Vadaine Oliver and A-Jay Leitch-Smith, but the points eventually went to the away side as Sheffield United loanee Gilmour scored a sensational winner with a minute remaining.

The Shrimps bounced back to that late heartache when compounding Carlisle United to their fourth successive home defeat with a 2-0 victory at Brunton Park. The attacking duo of Oliver and Leitch-Smith worked wonders again as they both scored in the first-half, in what was Morecambe’s most recent away fixture.

Since then, the Shrimps have had a further two home fixtures but picked up no points having lost by the same scoreline on both occasions. Colchester United maintained their impressive start to the season when becoming the first side to win 1-0 at the Globe Arena, Courtney Senior drilling home in first-half stoppage time to secure all three points.

In midweek, Mansfield Town put a stop to a long list of draws by also securing a slender victory in Lancashire. It was a goal worthy of winning any League Two fixture, Neal Bishop using all of his experience to volley home from 20 yards - leaving Morecambe in 20th position ahead of their trip to Rodney Parade. 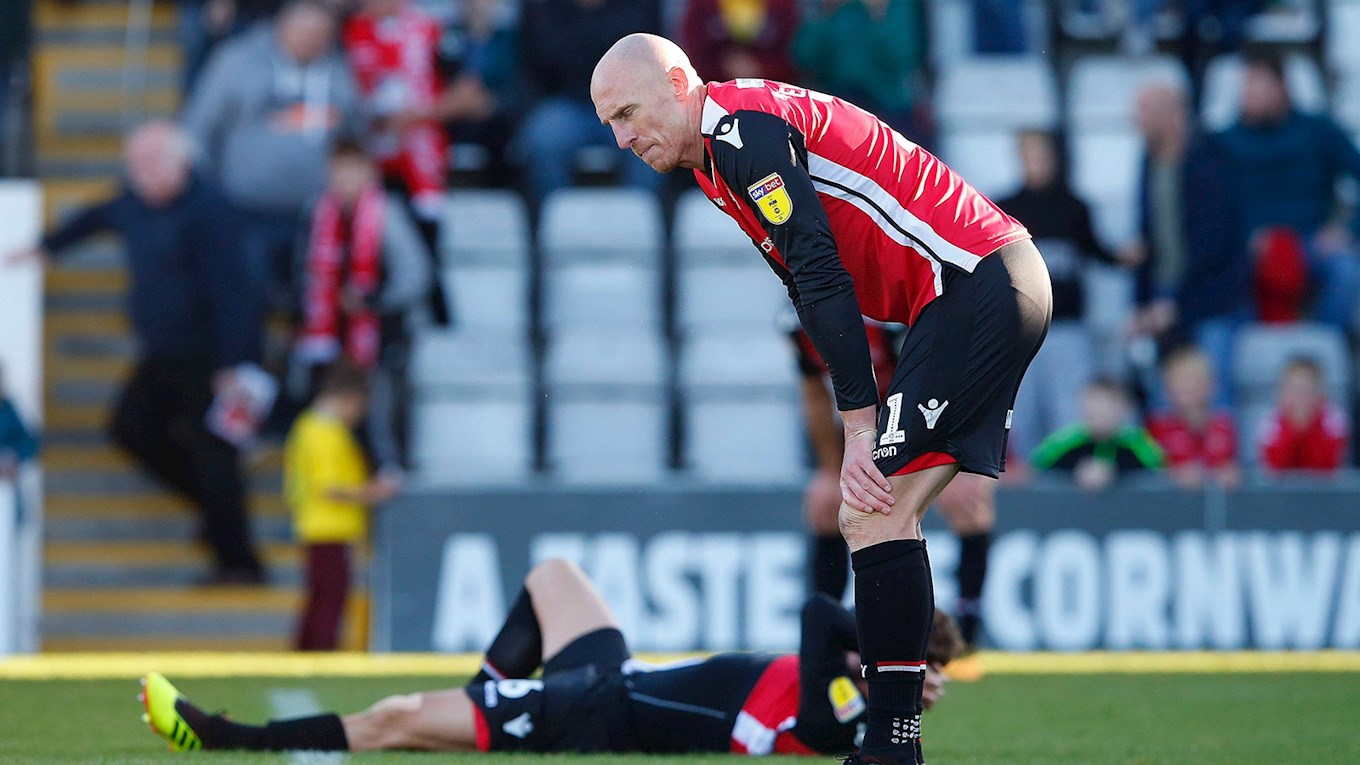 Morecambe’s injury woes show no signs of easing up as manager Jim Bentley prepares to bring his side to South Wales on Saturday.

Experienced duo of goalkeeper Barry Roche and attacker Kevin Ellison have at least provided the side with welcome returns in recent matches, but the injury list still remains extensive.

Forward Rhys Oates could only come off the bench for 25 minutes in midweek, so he may not be fully fit to fully start, while attacker Garry Thompson remained an unused substitute and his availability remains unclear.

The list doesn’t ease up too much for the Shrimps, but Bentley will be hoping that defender Steven Old, who is suffering from an achilles problem, and full-back James Sinclair can step up their recoveries ahead of the League Two contest.

One to Watch – A-Jay Leitch-Smith 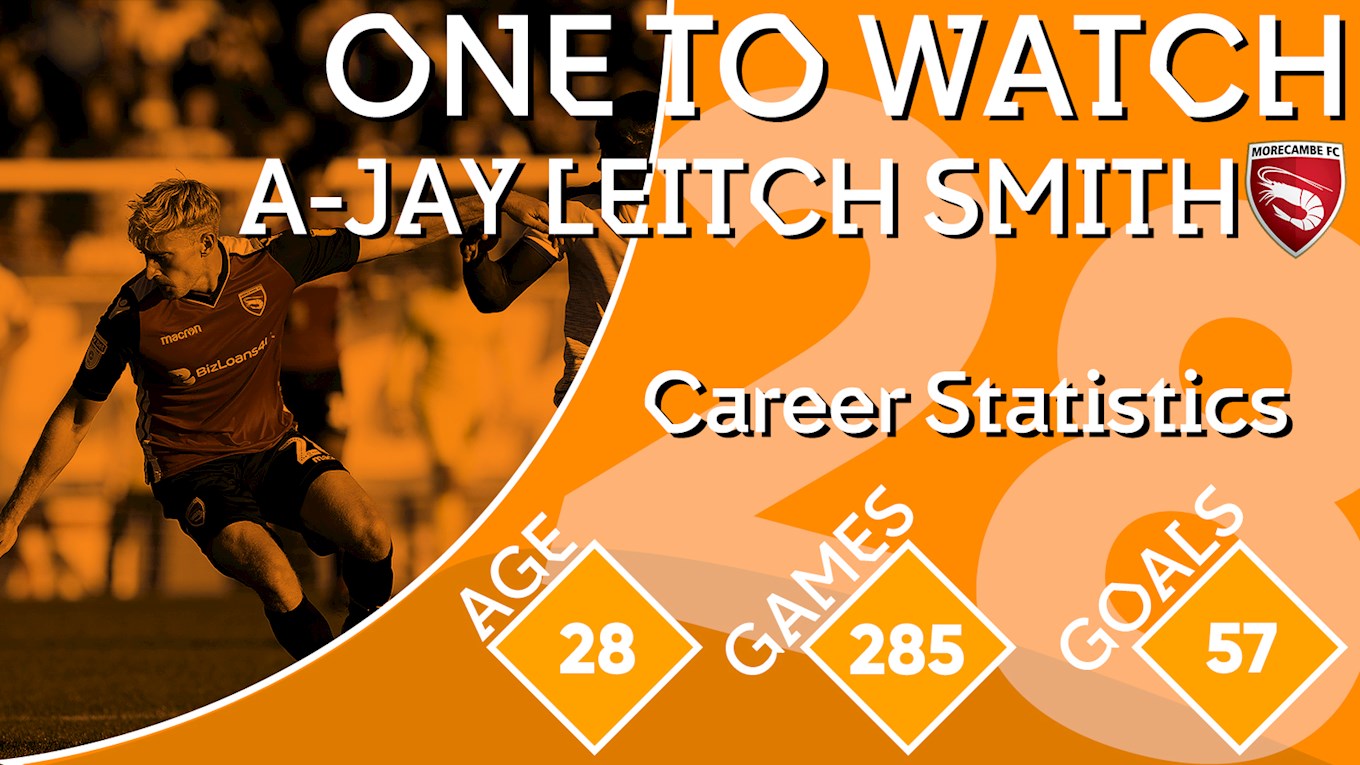 An intelligent and creative attacking midfielder, A-Jay Leitch-Smith has created a good relationship with central striker Vadaine Oliver this season and has chipped in with a few goals himself.

He has four goals already this campaign, directly accruing his side two points, with the most important goal arguably coming in the narrow victory over basement boys Macclesfield Town. Leitch-Smith also has goals against Northampton Town, Tranmere Rovers and Carlisle United.

The 28-year old certainly had an interesting start to professional football having broken through the ranks of Crewe Alexandra in 2008, being sent on several loans to Halifax Town, Newcastle Town and Icelandic club ÍBV.

He then made his Football League debut on 29th September 2009 during a narrow defeat to Bury FC, before another short loan stint at Curzon Ashton was followed by his first Football League goal on 21st August 2010 as part of a 7-0 victory over Barnet.

Leitch-Smith eventually brought an end to an eleven-year association with the Railwaymen in the summer of 2014, leaving at the end of his contract having scored 22 goals from 122 appearances and featuring in two wins at Wembley – the League Two play-off final against Cheltenham Town in 2012 and the Johnstone’s Paint Trophy final against Southend United in the following campaign.

A tough season at Yeovil Town was followed by a better stint with Port Vale in 2015/16, in what was the only campaign to date where Leitch-Smith reached double figures for goals, having found the net on 13 occasions.

He rejected a new contract at Vale Park after that stellar campaign and instead elected to link up with Shrewsbury Town. It was another tough spell for the attacker, with limited opportunities meaning he went out on loan to Dundee last season.

Seven goals in 32 appearances enticed Morecambe to take a punt and his move to the Globe Arena was confirmed on 8th August 2018. 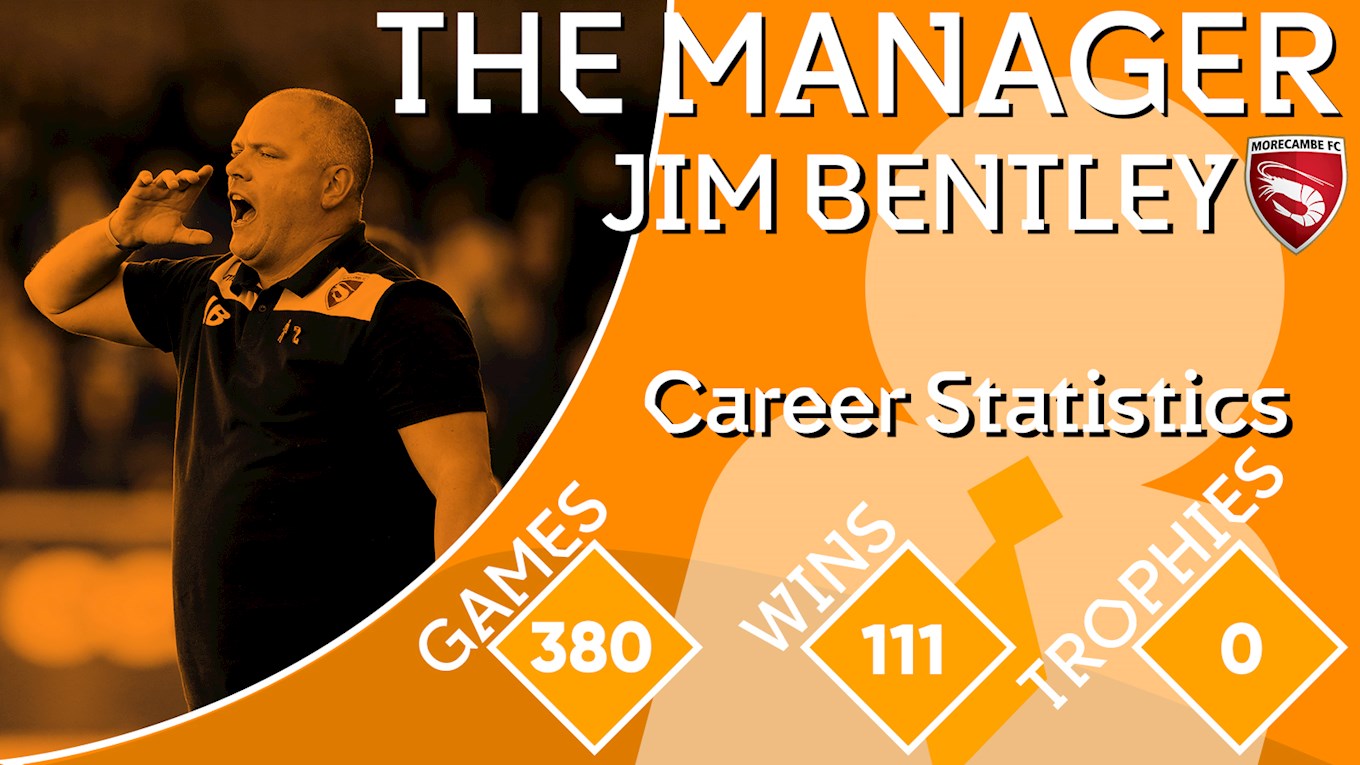 Holder of the prestigious accolade of longest serving manager in the top four divisions of English football, Jim Bentley is the epitome of a legend as far as Morecambe are concerned.

The 42-year old has over a year separating the closest other manager to him, who happens to be Wycombe Wanderers’ Gareth Ainsworth, having first taking the helm at Morecambe on 13th May 2011.

Initially appointed to the role in a player-manager capacity, Bentley quickly realised that he had to focus all his attentions onto the managerial side of things and didn’t play a further fixture for the club after agreeing that contract.

A club legend from his playing days as well, Bentley, a defender by trade, played just shy of 300 appearances for the Shrimps and scored 29 goals in the process.

He has since eclipsed that figure of matches since taking charge as a manager and has a 29.2% win ratio since ascending to the role.

Bentley unfortunately lost his first match in charge, a 1-0 defeat at home to Barnet on 6th August 2011, but has constantly defied the pundits' predictions and form books to keep Morecambe in League Two for the entirety of his spell – none more so than going to eventual play-off winners Coventry City on the final day of last season needing a point and getting it with a confident and composed display.

Meetings between the two clubs in the 2017/18 campaign 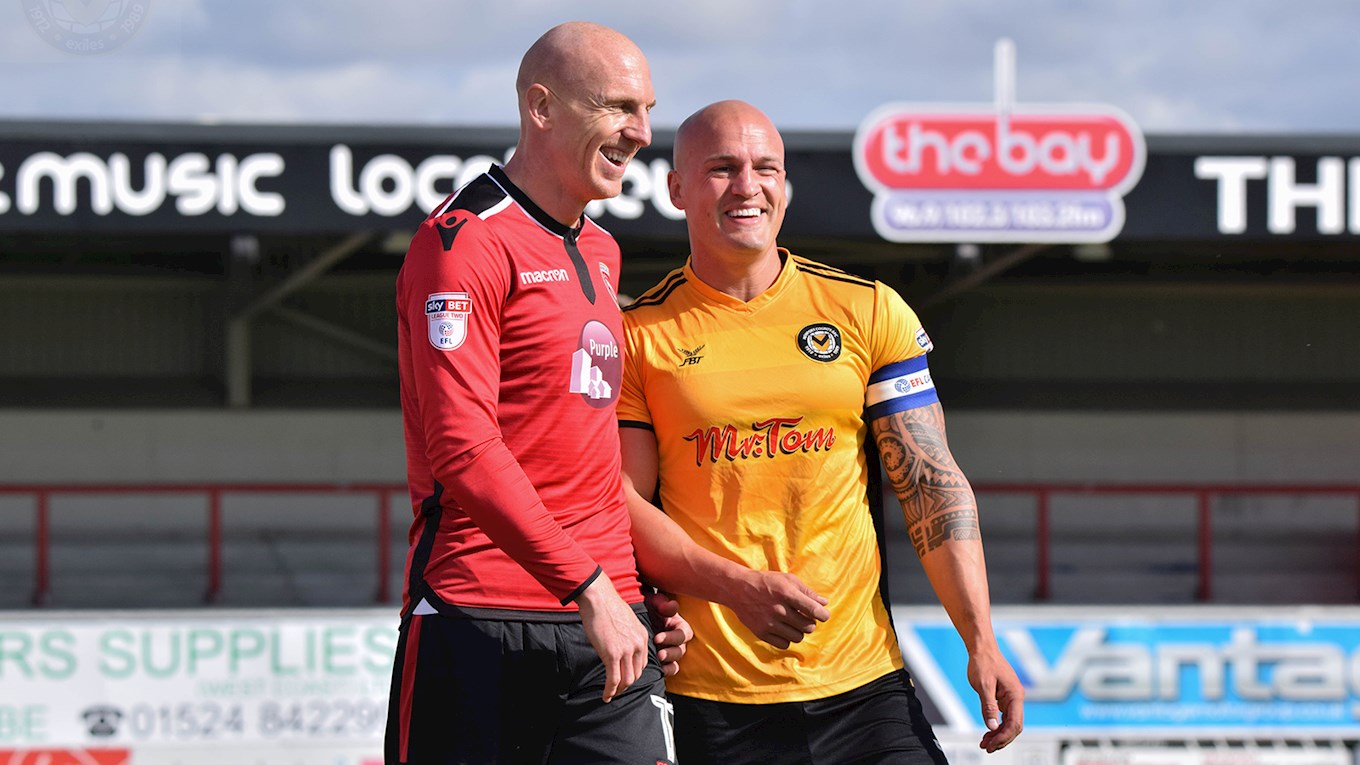 Two tough fixtures for County against Morecambe last season as they were only able to pick up one point against a team that only survived relegation on the final day of the campaign.

That starts with the first meeting between the two sides on 16th September 2017 as Kevin Ellison, so often the bane to the County side, scored twice in a 2-1 victory at the Globe Arena.

After a relatively quiet opening, the Shrimps took the lead on 35 minutes, Ellison reacting quickest after Joe Day had spectacularly denied Elliott Osborne to tap home from close range.

The Exiles weren’t behind for long, however, as Scot Bennett equalised within 90 seconds when reacting quickest to Mickey Demetriou’s cross-shot to send a clever reactive flick into the near post.

But Ellison was certainly intent on writing the headlines and he secured the home side all three points with ten minutes remaining, diverting a long-range attempt from Adam Campbell past Day and into the top corner.

Read the full match report from the Globe Arena.

In the reverse fixture, Morecambe extended their unbeaten run at Rodney Parade to five away fixtures as they ground out a 1-1 draw on 23rd January 2018.

Potentially having one eye on the massive Emirates FA Cup tie with Tottenham Hotspur that was to come four days later, the Exiles actually started off on the front foot and took the lead on 14 minutes when Ben Tozer curled home from close range.

But Morecambe just don’t know how to get beat in South Wales and County’s wait for a home victory over the Shrimps continued when away captain Michael Rose dispatched a penalty late on after Garry Thompson was tripped in the area by Joe Day. 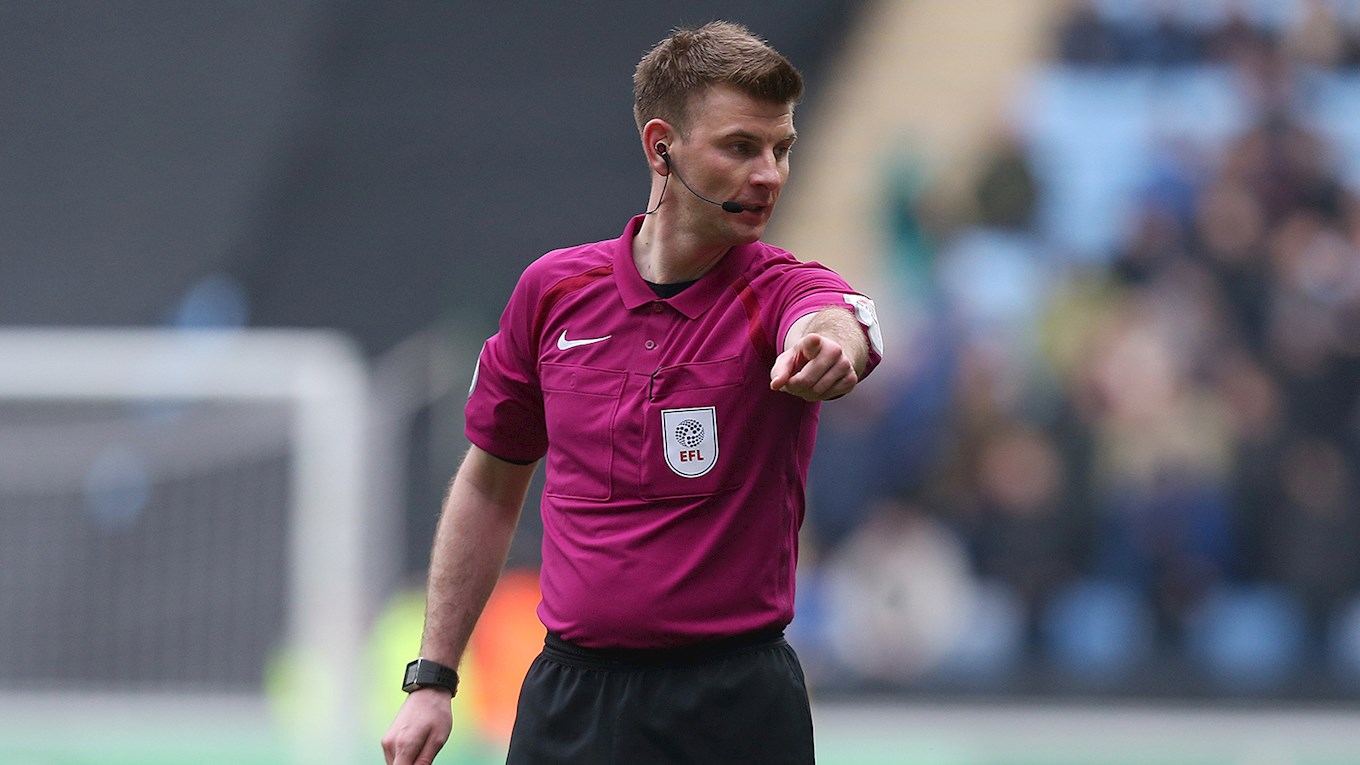 Yates is currently embarking on his third full season as a Football League referee having first taken charge of a fixture in League Two on 6th August 2016 as Yeovil Town started the season in perfect fashion with a home victory against Notts County.

After suffering a back injury in the early parts of last season, Yates has only been able to officiate 31 matches in the Football League and the respective cup competitions since his promotion.

He has now fully recovered from that injury problem and has refereed 12 matches so far this campaign, giving out 41 yellow cards and one red card, including four yellows in his first fixture as Fleetwood Town secured a 2-0 away victory at Oxford United.

Each game he has presided over this season has seen at-least one yellow card, including a season high seven on 13th October as Northampton Town ended Forest Green Rovers’ unbeaten start to the season with a stoppage time 2-1 victory at Sixfields Stadium.

His statistics for the last two seasons in the Football League read as 24 yellow cards in seven games last season, alongside 36 yellow cards and four red cards from 12 games in the 2016/17 campaign. 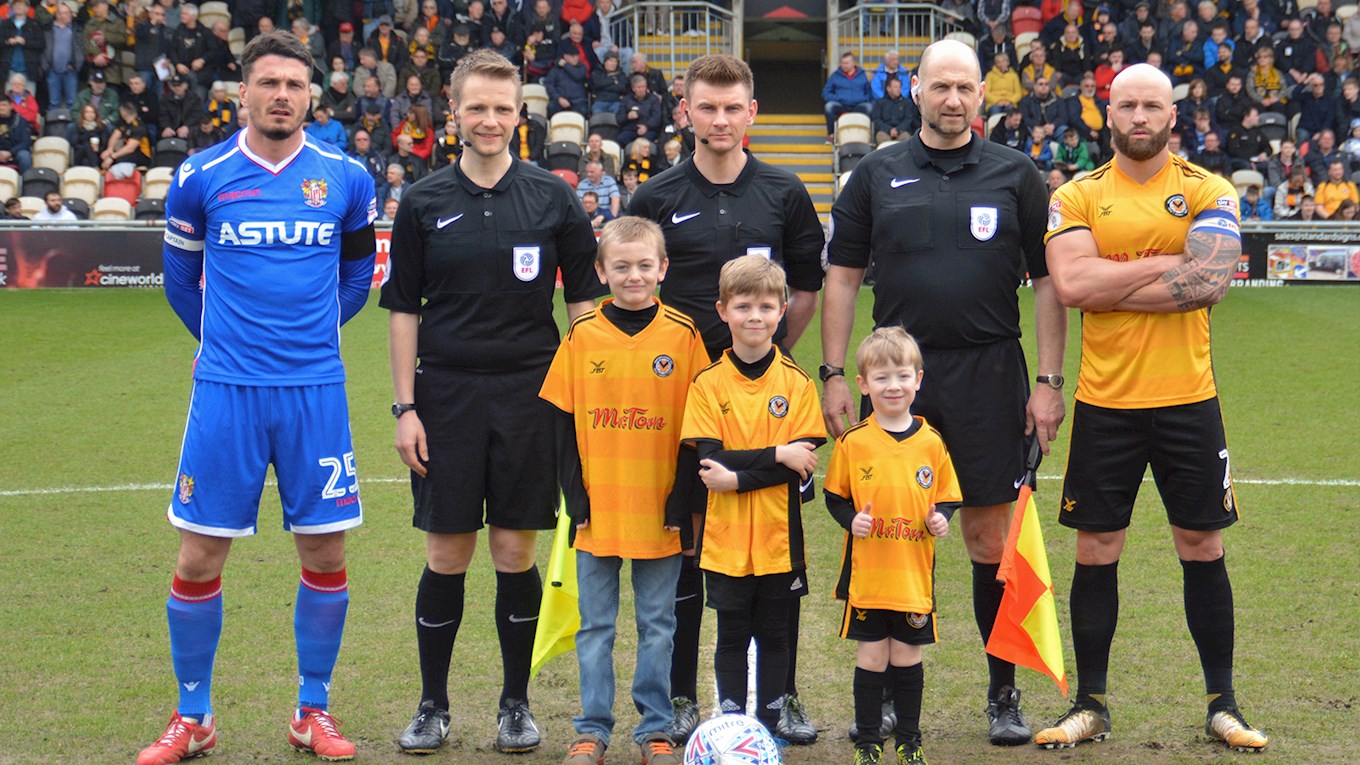 It wasn’t the greatest of results for the Exiles, however, as Stevenage became the fourth and last team to secure a victory at Rodney Parade last season on 7th April 2018.

Chris Whelpdale scored his first goal of the campaign just before half time to give the away side all three points, while Yates gave out four yellow cards. Dan Butler was cautioned from a County perspective, while Luke Wilkinson, Ben Sheaf and Fraser Franks were booked for Stevenage.

Yates has refereed Morecambe on two occasions and they both came during the 2016/17 campaign.

James Coppinger marked his 500th game for Doncaster Rovers with a starring role in their 5-1 away victory at the Globe Arena on 10th September 2016, while Alex Whitmore was dismissed for the Shrimps alongside a further three bookings.

The other game involving Morecambe was much more successful for the Lancashire side as Tom Barkhuizen scored twice to give them a 2-1 away victory at Notts County on 11th October 2016. Ryan Edwards was the only Shrimps player to receive a yellow card.

Other League Two fixtures that day (All 3pm Saturday)

JOIN US AT THE MATCH
GET TICKETS HERE