Newport County AFC will be hoping to keep their CheckaTrade Trophy hopes alive when they host Chelsea U21s tomorrow. The Exiles are looking for their first victory in the competition since a triumph over AFC Wimbledon in November 2016, while the visitors can virtually guarantee a place in the knockout stages by securing all three points at Rodney Parade.

Here, find all the facts and statistics ahead of this CheckaTrade Trophy encounter…

How they’ve fared in the league so far 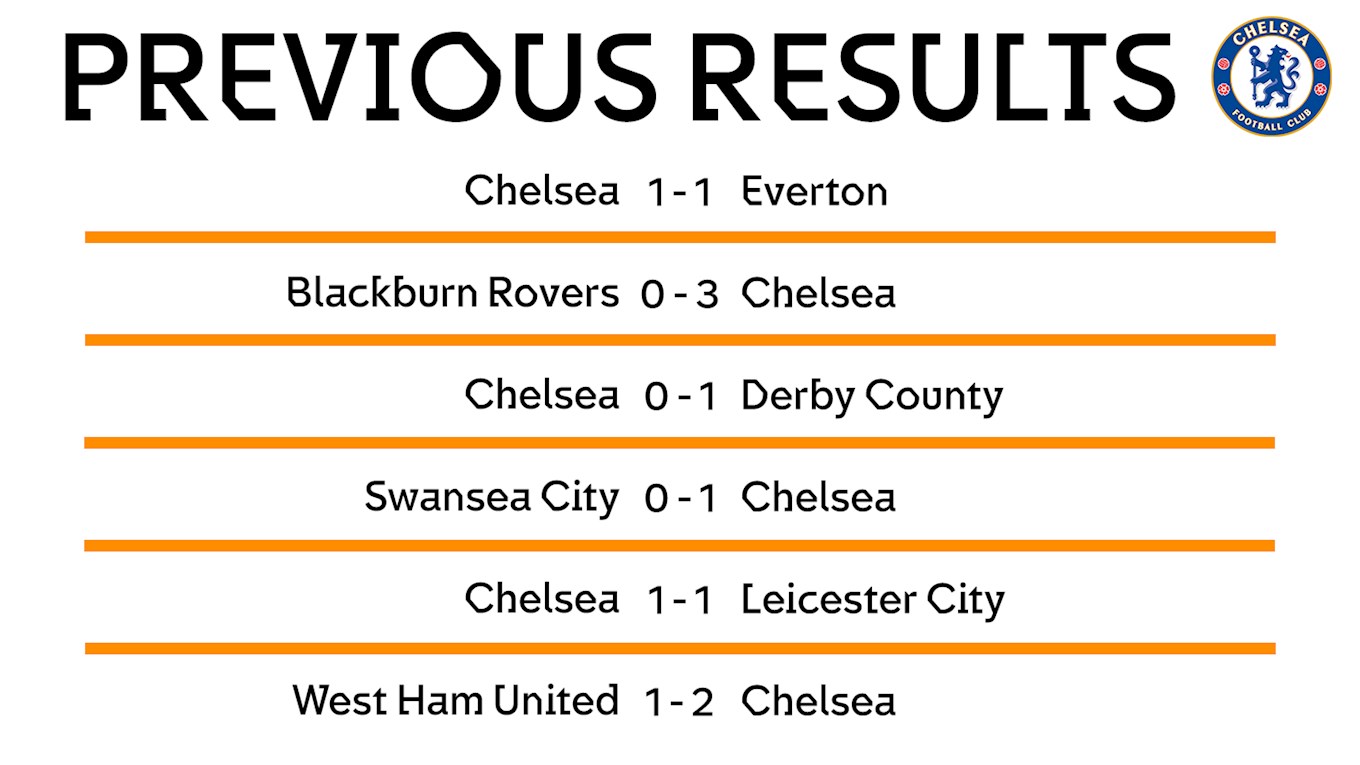 The young Chelsea side have made an extremely good start to ‘Premier League 2’ – the top division in the academy set-up – as they look to regain a trophy last won in 2014.

They kicked-off their campaign in-front of 523 spectators at Stamford Bridge, although couldn’t secure all three points against Everton. Charly Musonda’s penalty rescued them a point, after Harry Charsley had given the Toffees the lead on the hour.

In their first away game of the season, Chelsea secured their first victory thanks to a comfortable 3-0 success at Blackburn Rovers. Three 17-year olds got the goals on that occasion in a team solely composed of teenagers, Billy Gilmour, Daishawn Redan and Luke McCormick netting.

Next comes their only defeat of the league season so far as Derby County picked up a slender victory at Stamford Bridge. Striker Chris Martin got the goal on that occasion, before being sent out on loan to Hull City.

Chelsea bounced back from that defeat by securing a 1-0 victory at Swansea City thanks to Joseph Colley’s second-half strike, before dropping more points in a 1-1 draw with Leicester City. Callum Hudson-Odoi and Shinji Okazaki traded goals that time.

In their most recent match, an away victory against West Ham United put the Chelsea development side joint top of the league table and only behind the Arsenal development side due to an inferior goal difference.

Billy Gilmour and Joe Powell traded early penalties at the Chigwell Construction Stadium, but Chelsea capitalised on Tunji Akinola's dismissal to take all three points thanks to a winner from Charlie Brown.

How CheckaTrade Trophy Southern Group C is shaping up 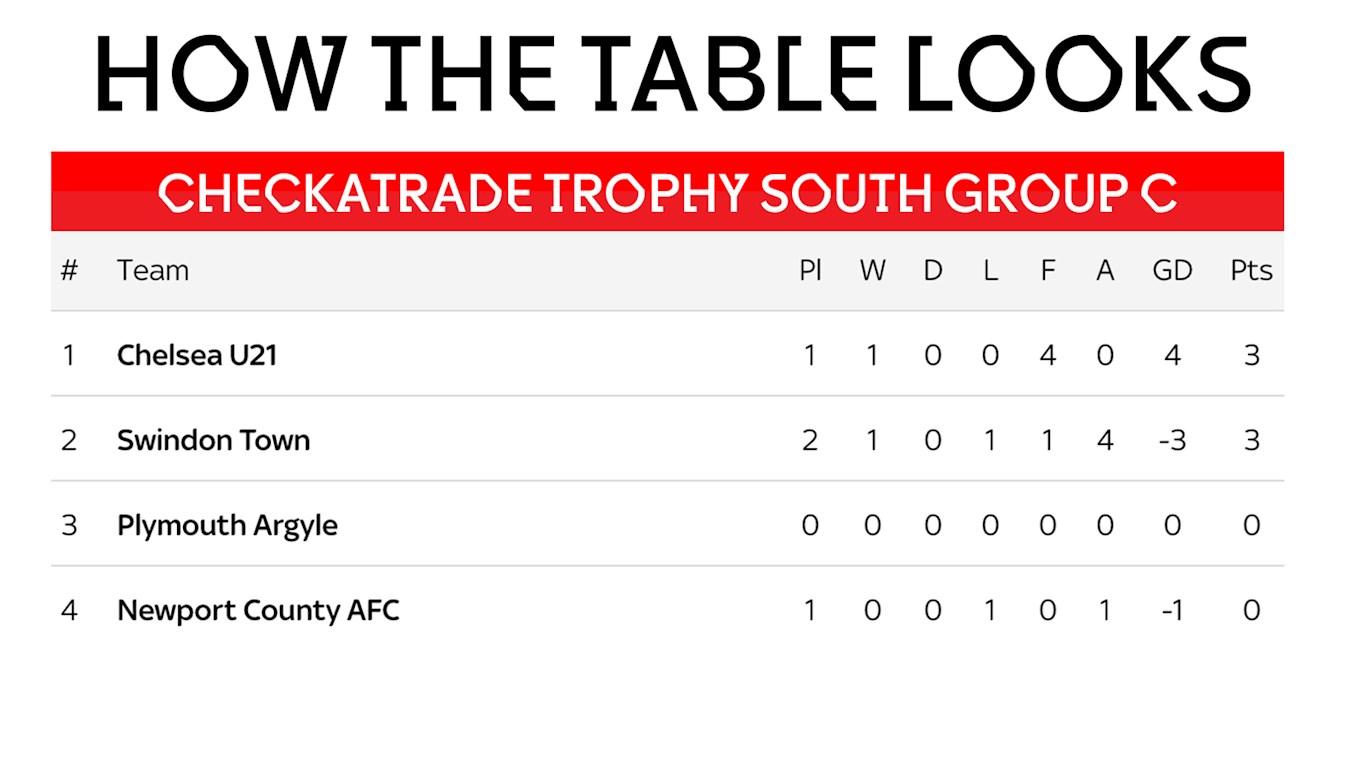 It’s fair to say Chelsea U21s have the greatest chance of getting out of the group this year after an emphatic performance in their opening group game.

The young Chelsea side controlled things from start to finish at the County Ground when facing Swindon Town and had the game virtually wrapped up by half-time with Charlie Brown dispatching Juan Castillo’s cross before Charly Musonda converted a penalty after a foul on Tariq Lamptey.

After the restart, the goals kept on coming as Brown got his second on the hour, slotting home comfortably within the area, and the scoring was complete two minutes from time thanks to a header from Ike Ugbo – who is now on loan at Scunthorpe United.

Swindon also join Chelsea U21s on the three-point mark after overcoming that comprehensive defeat by securing a narrow victory against the Exiles earlier this month.

In a game where chances came at a premium, Michael Doughty scored his fifth penalty of the season 12 minutes from time, dispatching the chance after Scot Bennett was adjudged to have felled Elijah Adebayo in the area.

Because of that defeat, it’s unlikely anything less than a victory either in normal time or on penalties will be enough to preserve County’s stay in the competition, unless other results went their way as well as victory in the final game.

Plymouth Argyle have the added bonus of not playing a single match yet in the competition, meaning the Pilgrims will know exactly what they have to do to qualify when they kick-off their group stage campaign against the Robins on October 9th.

One to Watch - Callum Hudson-Odoi 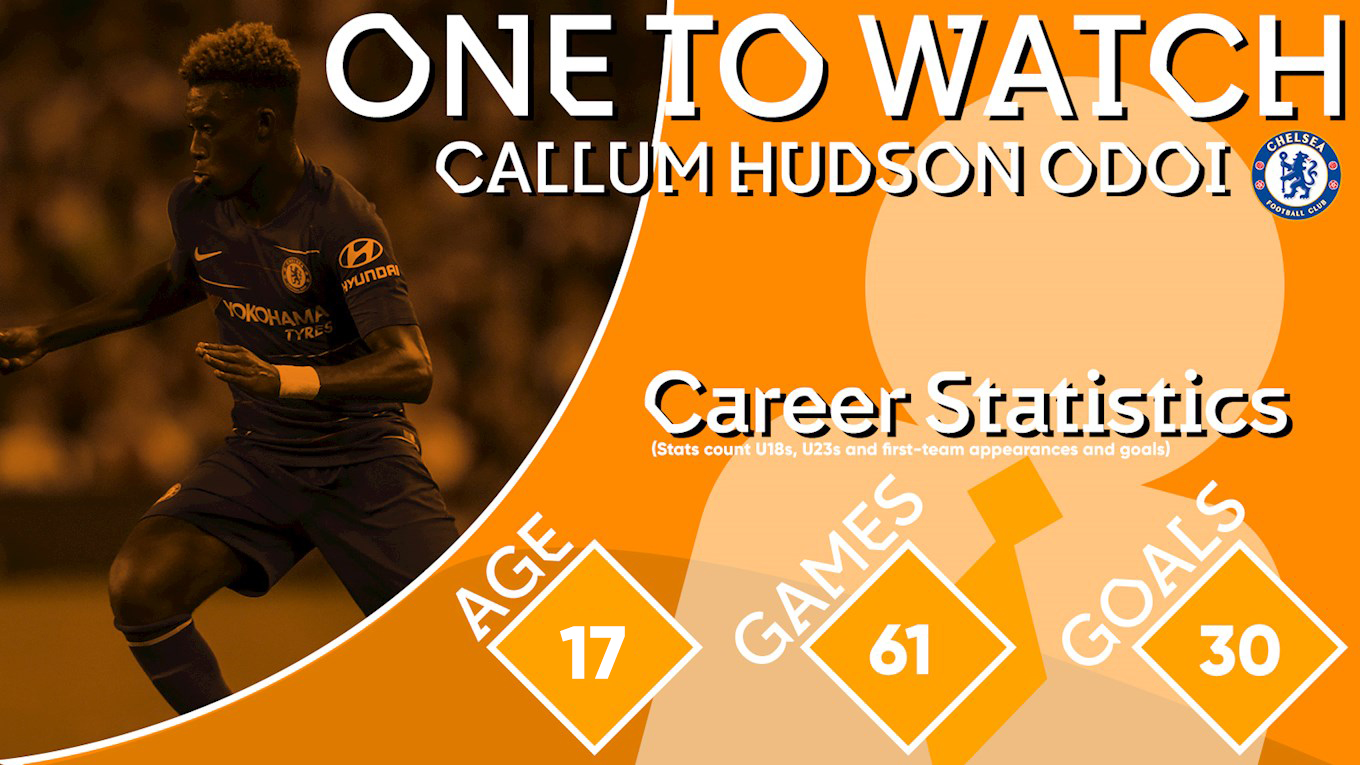 One of the hottest young prospects in England at the moment, Callum Hudson-Odoi has already been involved in the Chelsea first-team even though he is just 17 years of age.

Hudson-Odoi was picked up by the Chelsea academy at the age of six and joined the club in 2007, working his way through the various age grades before making his U18s debut in August 2016.

The forward-thinking winger went on to make 25 appearances in that debut campaign, netting eight goals as the young Chelsea side secured their eighth FA Youth Cup title.

Those performances fast tracked Hudson-Odoi into the U23 side even though he was only 16 and he went on to star in this very competition last season, scoring four times in five appearances as Chelsea reached the semi-finals.

First involved in a first-team matchday as early as December 2017, Hudson-Odoi went on to make his professional debut for the club on 28th January 2018 when replacing Pedro with nine minutes remaining in an Emirates FA Cup tie with Newcastle United.

His Premier League debut came three days later, although it wasn’t in the best of circumstances as AFC Bournemouth secured a shock 3-0 victory at Stamford Bridge.

As well as frequently featuring for the development side, the winger went on to make a further two first-team appearances last season, in a cup tie with Hull City and during Chelsea’s home defeat to Tottenham Hotspur.

Following an impressive pre-season ahead of this campaign, new Chelsea manager Maurizio Sarri handed Hudson-Odoi the number 20 shirt for the upcoming campaign and confirmed he would be heavily involved in first-team proceedings alongside the development side.

On 5th August 2018, the 17-year old made his first Chelsea start during their Charity Shield defeat to Manchester City, featuring for 59 minutes at Wembley. 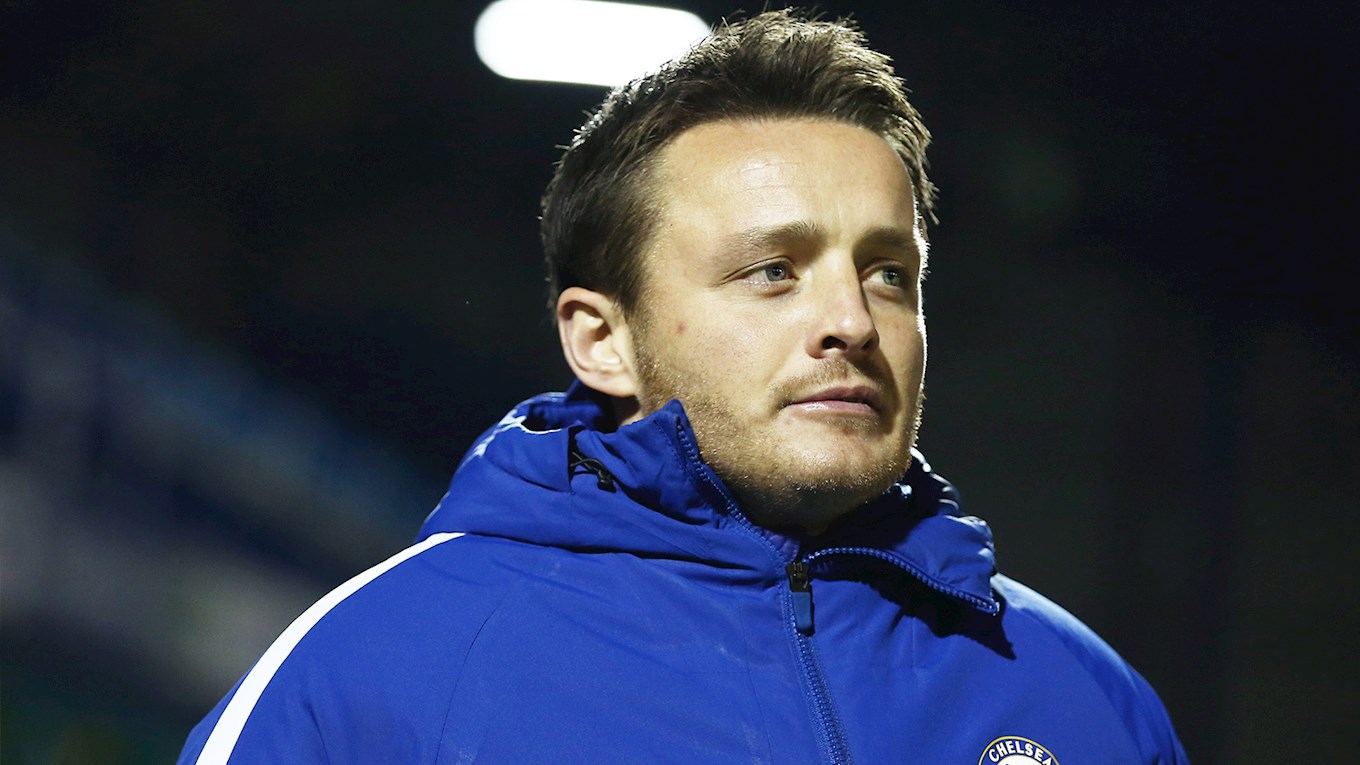 Success has been achieved for many years in the Chelsea age grades and the trophies have continued to roll in following Joe Edwards’ appointment as development team manager at the start of the 2017/18 campaign.

In his debut campaign, the young Chelsea side didn’t fare too well in the league and finished in 8th position, but Edwards led the team to more success in the CheckaTrade Trophy.

They were only denied a place in the final at Wembley following a penalty shootout defeat to Lincoln City in the semi-final, meaning Edwards holds the record for being the manager to take an academy side the furthest in the competition.

Before stepping up to the role, Edwards had been working his way up the ladder in the Chelsea setup and has been part of the Academy coaching staff since 2004, being promoted to U16s manager in 2011.

Highly-thought of within the ranks at the Blues, Edwards was handed the reins of the U18s ahead of the 2014/15 campaign and held that role for two complete seasons – winning the league and FA Youth Cup double on both occasions.

Edwards then spent the 2016/17 campaign working as loan player technical coach, meaning he was tasked with checking on the development of loan players at their respective clubs.

He was also part of the England Under-18 backroom coaching staff that helped the young Lions win the Toulon Tournament in June 2017.

His performances in those prior roles clearly impressed the Chelsea hierarchy and when Adi Vivaesh left his role as development team manager to be assistant manager at Coventry City, Edwards was the perfect candidate to come in and continue the philosophy embodied by the Premier League giants. 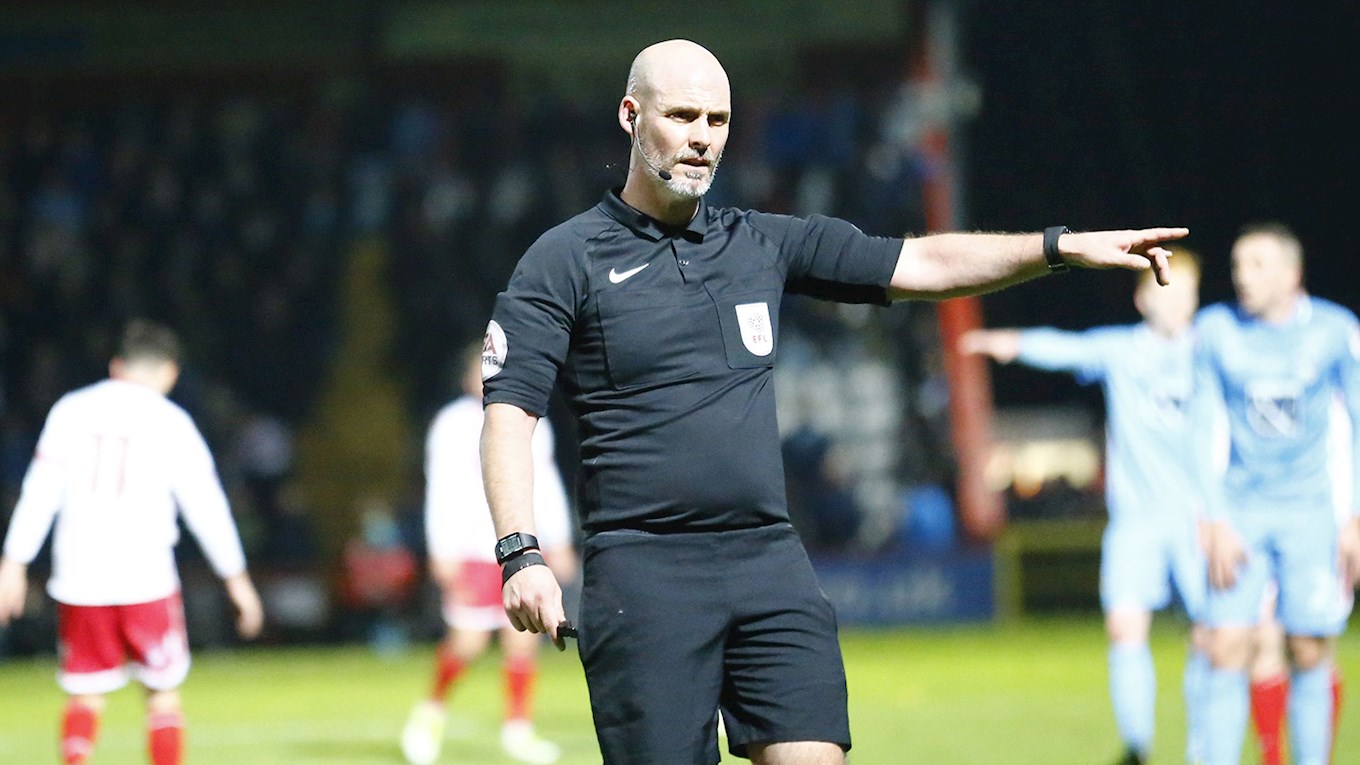 He has refereed eight matches so far this season, giving out 26 yellows and no reds, including three on the opening day of the season as Bradford City won away at Shrewsbury Town.

He gave out a further eight yellows across Plymouth’s victory at Bristol City in the Carabao Cup and Bristol Rovers’ win at Wycombe Wanderers, before failing to brandish a single card in the opening round of CheckaTrade Trophy fixtures as Stevenage demolished Swansea City U21s.

A joint league high seven yellow cards were awarded as Lincoln City won the top of the table clash at Exeter City, before he again didn’t award a card as Charlton Athletic drew with AFC Wimbledon.

One card was awarded as Peterborough United won a five-goal thriller at Southend United, while another seven cards were given in his most recent game as referee as Bury FC won at Swindon Town on 15th September.

On Saturday, he was fourth official in the Championship as Nottingham Forest secured a home victory against Rotherham United.

Other CheckaTrade Trophy matches that night