The Exiles are on the road for the first time in the 2019/20 Sky Bet League Two season this weekend, with Cambridge United the destination. 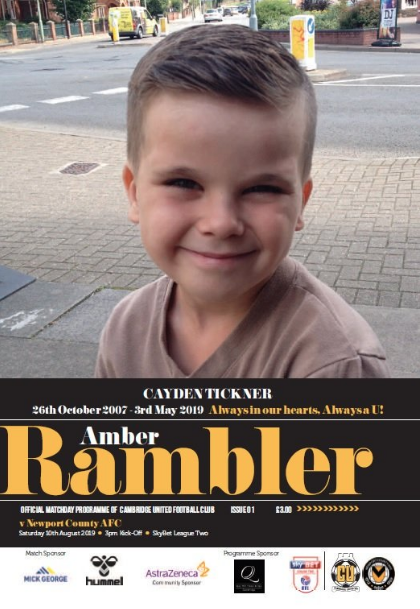 NCAFC are kindly asking all supporters who are travelling to the match to join with Cambridge United in celebrating the life of fellow U’s fan Cayden Tickner on Saturday, after the 11-year-old sadly passed away after struggling with a brain tumor recently.

An eleventh-minute applause will take place at the Abbey Stadium tomorrow to remember the former U's fan, as well as a bucket collection at several points in the stadium raising money for the Joshua Tarrant Trust.

Based in the East of England, the Trust is a registered charity dedicated to supporting Children with Brain Tumours.

Due to an issue at Cambridge's Abbey Stadium at the moment, all disabled away supporters travelling to the match have been asked to contact Andy Pickard, Matchday Safety Officer on 07946582780 upon arrival to assist with entering the South Stand where all travelling Exiles will be based.

Tickets for County's next Sky Bet League Two match of the season away at Cambridge United are available on the day.

Tickets will be available to travelling members of the Amber Army via the ticket office at the Abbey Stadium, priced at:

Purchase your ticket for £2 less before the day of the match by clicking here.

Visiting supporters are allocated tickets in the South Stand or South Habbin Stand.

Entrance to both stands are located on Coldhams Common which supporters can access either from Newmarket Road or Coldhams Lane. From the CUFC Club Shop, head back out on to Newmarket Road, turn left and then turn left again to walk down the foot path and enter at the far end of the ground.

From the South - M11 to Junction 14, then turn east along the A14 dual carriageway:

From the North - A14 from Huntingdon, then turn east along the A14 dual carriage way:

Then exit the A14 at the fourth junction (situated east of Cambridge), up the slip road to the roundabout (signposted Stow-Cum-Quy). Turn right onto the A1303, and return westwards towards Cambridge. Go straight over the first roundabout, passing Marshall Airport to the left. Go straight over two sets of traffic lights to a roundabout. The Ground's floodlights can be seen from here and McDonald's is on the right.

Turn left onto the ring road. Turn right at the first roundabout (a large Sainsbury's is on the left here), and go along Coldham's Lane. After half a mile, immediately after the traffic lights turn right into Coldham's Road before the railway bridge.

A Citibus C3 bus stops within a few yards of the ground (Ditton Walk stop) on Newmarket road and runs from the Railway Station and through the city centre every ten minutes during the day, and at longer intervals in the evenings. Check the Stagecoach website for more details and a Citi 3 timetable.

On days when the U’s play at home, both home and away supporters will be able to purchase a special £2.50 return ticket from the Newmarket Road Park & Ride to ferry them to and from the Abbey Stadium.

The ticket is valid for one passenger only. However, if travelling with children, the normal £3 Park & Ride ticket is also available to purchase, allowing children under the age of 16 to travel free with one fee-paying adult.

Ahead of the 3pm kick-off, fans can catch any of the regular Park & Ride buses heading into the city centre, which will all be stopping at the ground. On the return leg, there will be a dedicated bus waiting in the layby outside the stadium at 4.45pm, to take fans back to the Park & Ride once the game is over.

There are Tea Bars located at the rear of both the South Stand and South Habbin Stand serving a mix of hot food including hot dogs, beef and chicken burgers, chips and pies, with hot and cold drinks, chocolate bars and bags of crisps also available.

Meanwhile, there is also an additional catering unit to the left of the South Stand which away supporters will find immediately to their right once entering the turnstiles.