Newport County AFC will be looking to return to winning ways in League Two when they travel to strugglers Notts County on Tuesday night. After exiting the Emirates FA Cup on Saturday, the Exiles now have 15 games remaining to try and elevate themselves back up the table, whilst the Magpies are in-form at the moment and will be hoping to continue that in their fight against relegation to the non-league.

Here, find all the facts and statistics ahead of this League Two encounter. 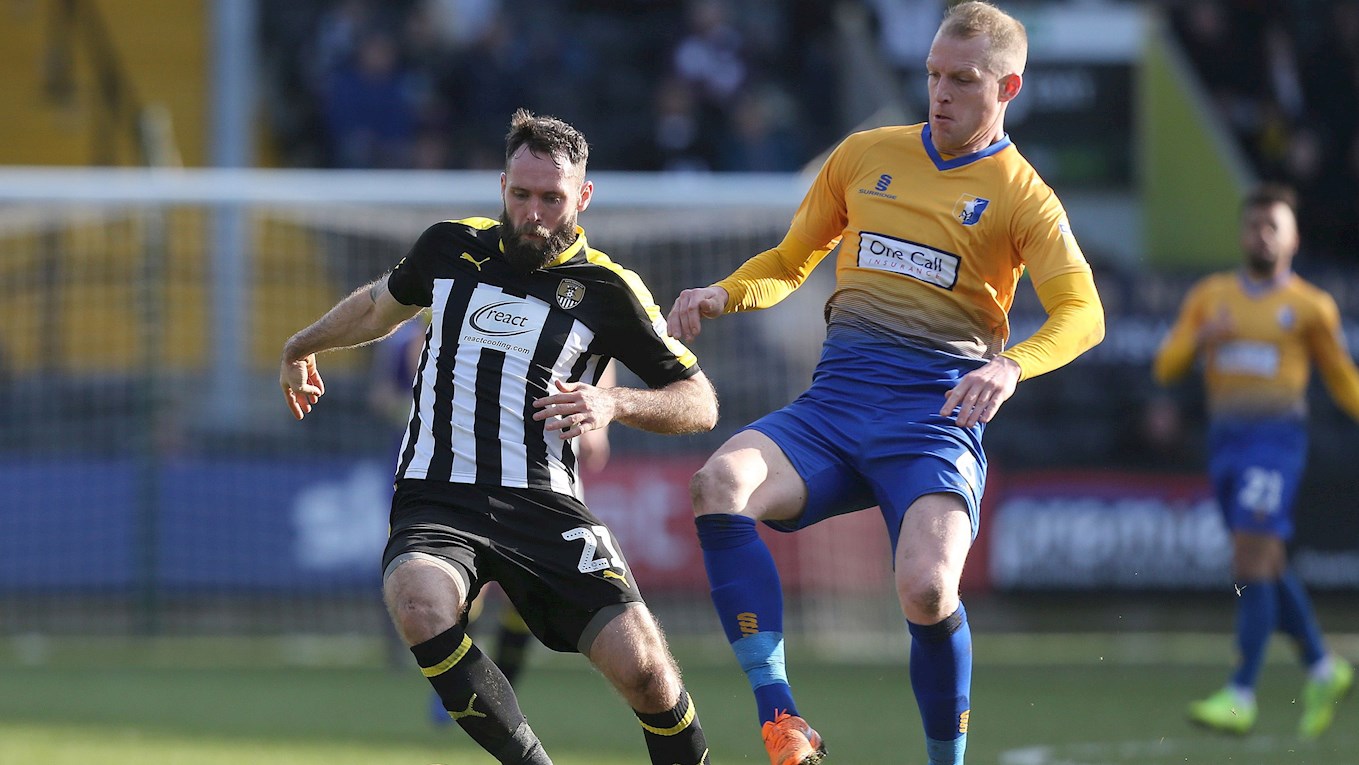 It’s been nothing other than a difficult season for Notts County and their supporters this season, but they appear to have turned a corner of late as they fight to stave off relegation.

One of the favourites for promotion at the start of the campaign, things just haven’t worked out for the Magpies and they’ve spent the majority of the season in the relegation zone – only going as high as 14th and even that was only because they drew on the opening day of the season.

The writing appeared to be on the wall for the side when they were cast further adrift of safety with a disappointing 1-0 home defeat to Cambridge United – Greg Taylor getting the winner – before a 2-0 reverse at Yeovil Town thanks to goals from Tom James and Mihai Dobre.

As shown in County’s own ‘Great Escape’ two seasons ago, the January transfer window can prove vital and after the new recruits had those games above to settle in, they’ve really knuckled down to give the Magpies a fighting chance.

Jon Stead’s penalty allowed them to hold high-flyers Lincoln City to a 1-1 draw at Meadow Lane when Bruno Andrade got the equaliser, before they stunned another promotion contender with just their second away success of the campaign thanks to Enzio Boldewijn’s late winner in a 2-1 victory at Forest Green Rovers.

On Saturday, another scalp of a team at the top was secured as they achieved a first victory over Nottinghamshire rivals for 13 years at Meadow Lane. Craig Mackail-Smith’s divine half-volley in the first-half was enough for a priceless three points in a 1-0 victory. 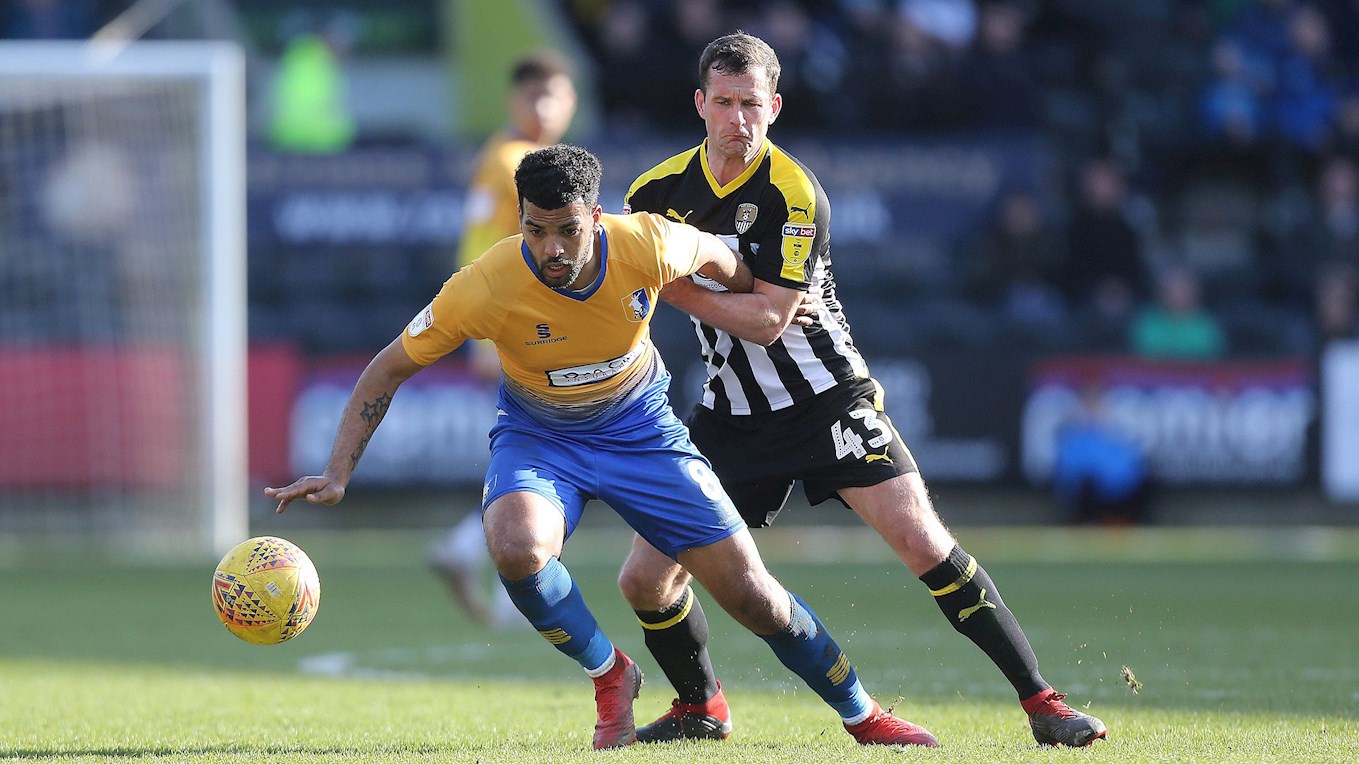 It appears that Notts County have no fresh injury concerns ahead of the Exiles travelling to Nottingham on Tuesday night.

A club with one of the biggest playing squads in the division, the Magpies brought in eight fresh faces over the January transfer window to help with their fight to avoid relegation so they could shuffle the pack for this fixture.

Manager Neal Ardley said after Saturday’s victory over Mansfield Town: “We’ll have to be careful with injuries and we’ll freshen it up a bit if we can.

“One or two might come in to the fold, we’ll have a look at that, but I won’t make any decisions until I see where the players are on Monday and we’ll take it from there.”

One to Watch – Craig Mackail-Smith 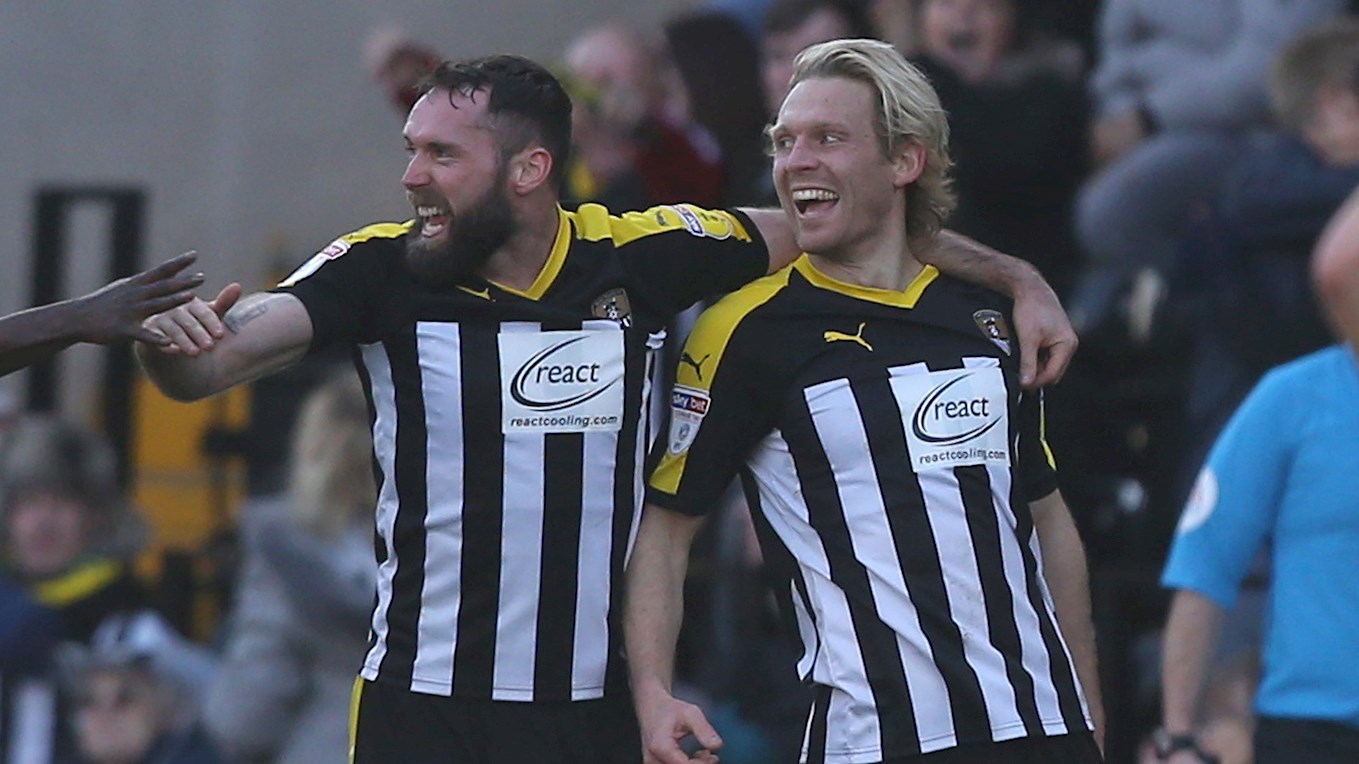 Alongside fellow experienced player Michael Doyle, 34-year old striker Craig Mackail-Smith was brought in during the January transfer window to keep the club in the Football League and he’s already starting to make his presence known in Nottingham.

He hit the winner on Saturday against Mansfield Town – a game even the club dubbed as the ‘biggest ever Nottinghamshire derby’ and he’s made a difference in all three of his appearances so far to help the club into a position where a victory over County would take them out of the drop zone.

Speaking about the game, Mackail-Smith said: “We’ve played three of the top teams which, to an extent, were free hits because no one expected us to get the results we have done, so the match against Newport on Tuesday will be a harder test.

“If we show the same application we did versus Mansfield, I think we’ll come away with a positive result.”

A goal scorer wherever he’s been, Mackail-Smith has been involved in three promotions and played in all divisions up to the Championship, and he’ll be hoping to transfer those skills to the Notts County survival push.

A key example of how Peterborough United like to buy players from the lower leagues and give them a platform to showcase themselves, the 34-year old scored 99 goals in his first spell at the club before earning his move to Brighton & Hove Albion, where he scored 24 goals. 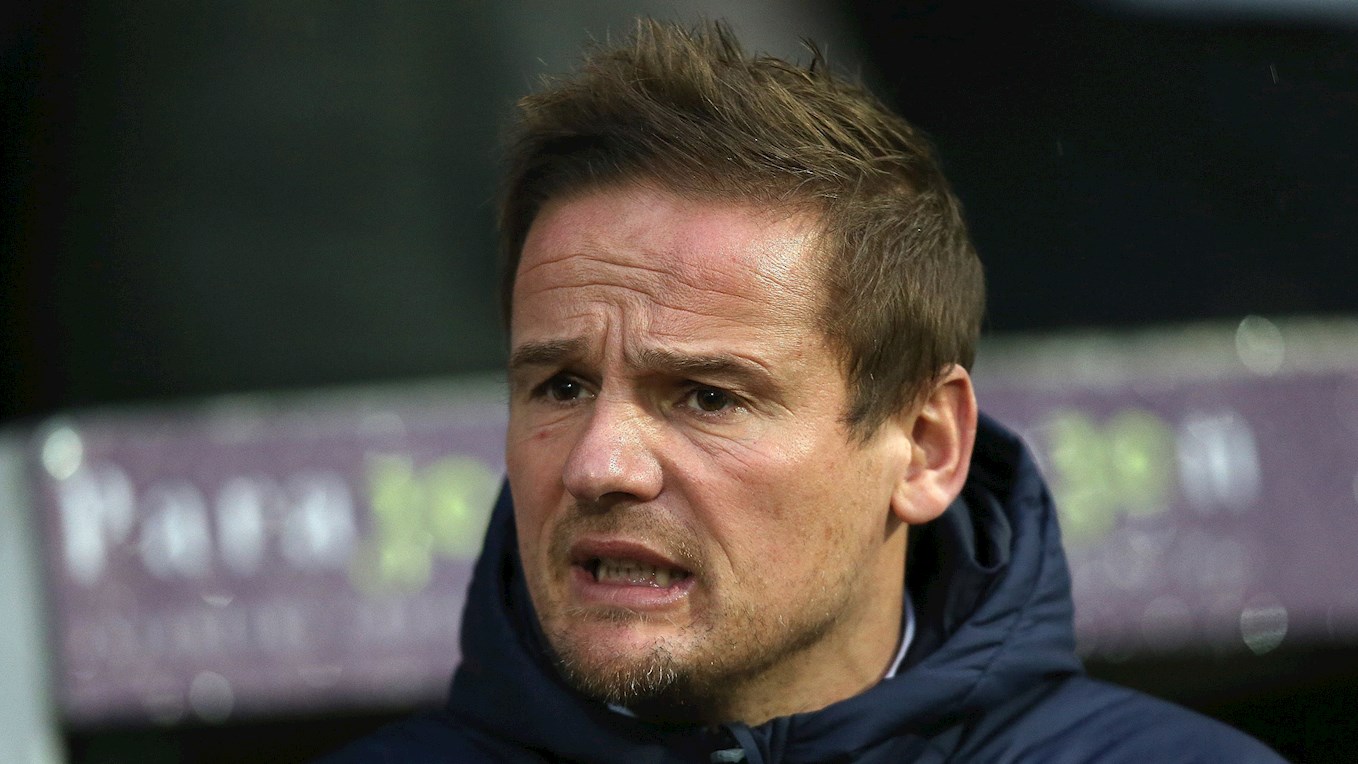 Football management is not an easy job and Notts County manager Neal Ardley will know all too well how difficult and tough it can be since taking to the hotseat on 23rd November 2018.

The Magpies had already sacked two managers in the opening four months of the campaign and Ardley’s tenure didn’t exactly get off to the best of footings with one league win in the first 12 – but he’s used his shrewd business acumen to bring the right people to the football club in the January transfer window and given the side a chance.

What Ardley has done is bring some experienced heads into the football club that will also demand perfection on the pitch, he’s united the club with its supporters once again, and turned a seemingly doomed club into one with a real chance of now staying in the Football League.

His win percentage is starting to creep back up although it is at the moment just 20%. He’s won three of his first 15 matches, drawing on five occasions and losing seven matches.

This is only his second managerial position in professional football after a six-year spell in charge of AFC Wimbledon, where he is a true club legend both for his tenure as manager and the 200+ games as a player.

Taking to the dugout on 10th October 2012, Ardley went on to achieve some magical moments for the club, none more so than promotion to League One through the play-offs in 2015/16, alongside securing the club’s first ever victory over MK Dons. 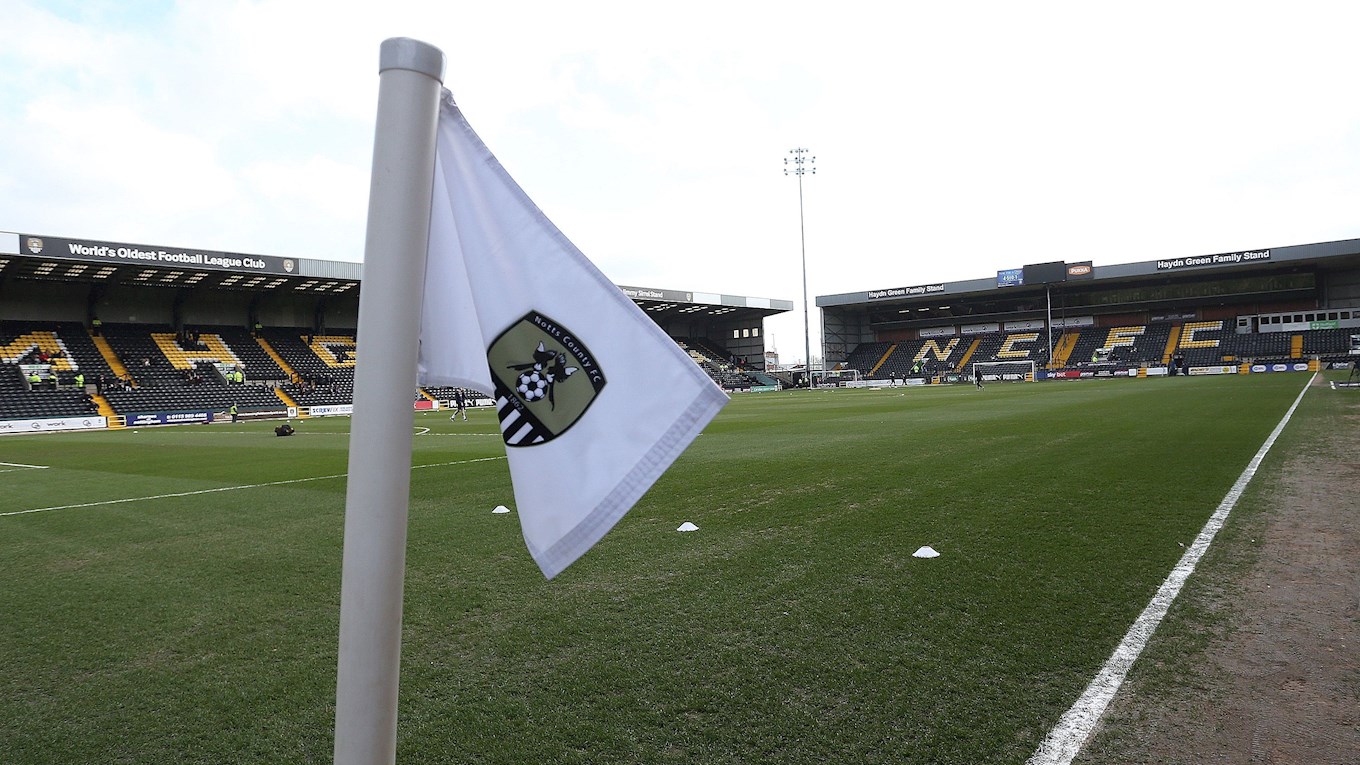 A stadium often frequented by Newport County AFC over the years, Meadow Lane has been home to Notts County since 1910 and has a current capacity of 19,841.

An all-seater stadium which arguably boasts – excluding Rodney Parade – the best view of the pitch in League 2 for members of the media in the press box.

Situated opposite the away fans in the ‘Derek Pavis’ stand, the high vantage point at Meadow Lane allows you to work out how each team has setup quite easily alongside being able to predict a pass before it is made – that is, if you are not afraid of heights!

And one recurring theme from County’s trips to Nottinghamshire throughout history has been goals – and lots of them.

Even in the recent Football League years, there’s been even more goal fests, starting with the 4-3 victory for Notts County on 12th December 2015. 380 County fans attended.

Since then, both sides have picked up a 3-0 win apiece – 241 traveling fans were there to see the Exiles triumph on 19th November 2016, whilst 341 made the trip on 28th October 2017 for the Magpies victory of that scoreline. 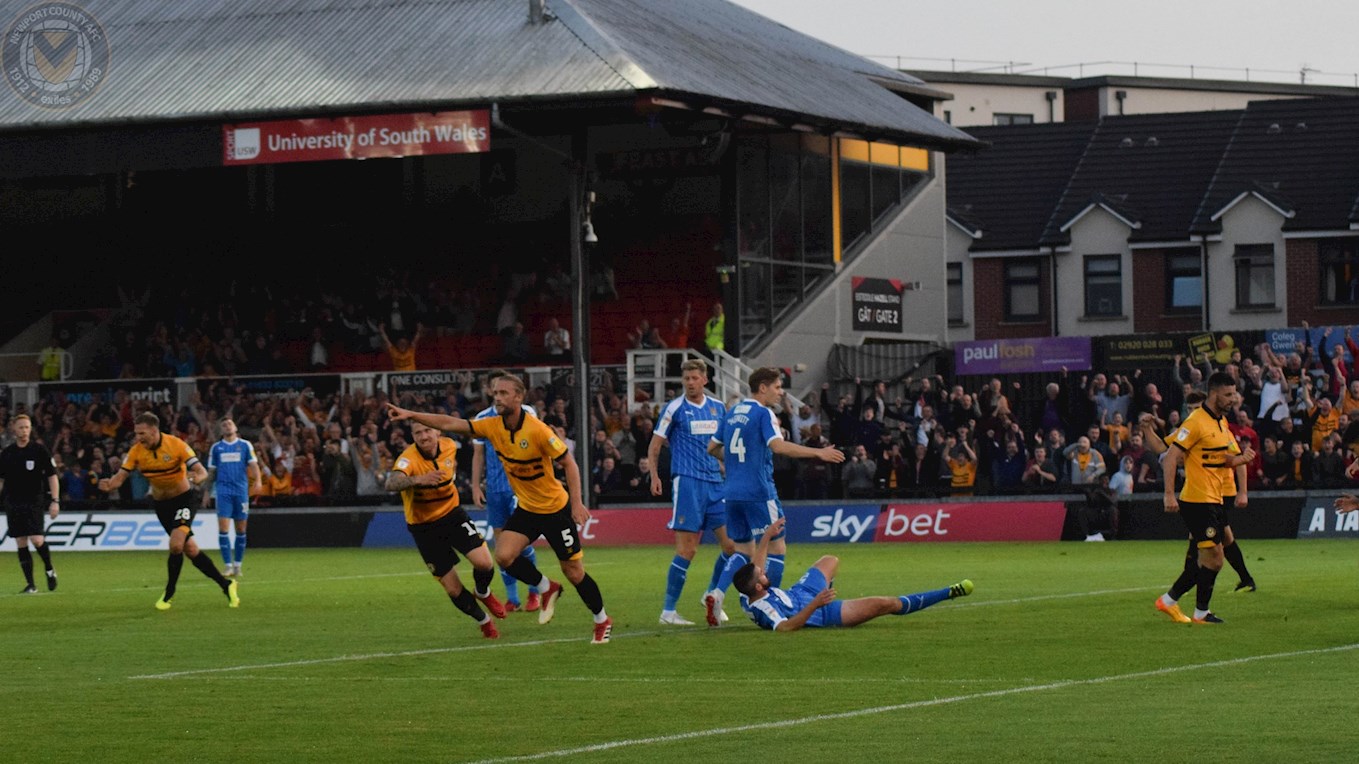 Jamille Matt struck the most dramatic of injury time winners to ensure Newport County AFC made it two from two at Rodney Parade with a 3-2 victory over Notts County.

The Magpies struck first, Enzio Boldewijn doing remarkably well to skip past the challenge of Dan Butler and into a dangerous position, crossing into the area for Kane Hemmings to stab home after beating Scot Bennett and Fraser Franks to the delivery.

Franks may have felt frustrated at not picking up his man in the area, but he certainly made up for it when netting his first goal in County colours, heading home from a Matty Dolan corner to level proceedings on 24 minutes.

The Exiles completely turned the game on its head within two minutes of the equaliser, Padraig Amond seizing the initiative after a wayward Richard Duffy pass, setting up Mark Harris to finish in off the post from outside the area for his second in two games.

Notts County hit back with two minutes remaining, Boldewijn again making the difference as his cross-field pass went over the County defence into the path of substitute Kristian Dennis at the far post, the striker taking one touch to steady himself before poking a shot through Joe Day and levelling the scores.

Some other sides would have caved in when conceding so late, but it only seemed to spur County on, and the Exiles sparked wild scenes inside Rodney Parade with virtually the last kick of the game.

Tyler Forbes’ looping ball into the area looked too deep but Amond was able to use all his might to head back into the danger area, where the ball sat perfectly for substitute Matt to tap home the most dramatic of late winners. 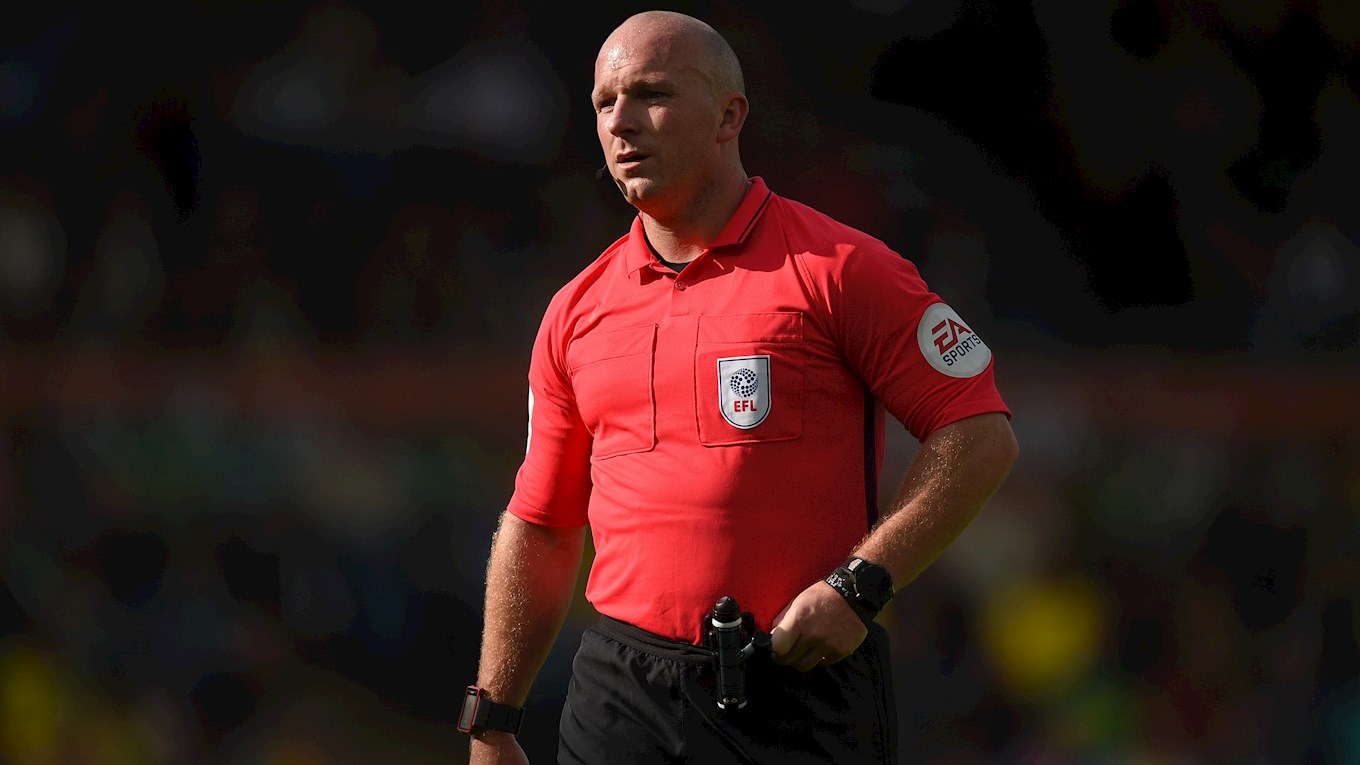 A highly regarded official, Simon Hooper has been a Football League referee for 11 seasons and has spent the majority of that time presiding over matches in the Championship.

He’s also refereed eight top-flight Premier League matches – six of which have come this season – with the first of those contests coming on 8th August 2015 as Crystal Palace won 3-1 away at Norwich City.

This season, he has refereed 22 matches thus far, giving out 69 yellow cards and four red cards, including five yellows on his inaugural match of the campaign when Yeovil Town smashed Tuesday’s hosts Notts County in a 4-0 away victory.

Only one fixture has passed this season without Hooper needing to go to his pocket – that match coming in the Premier League as Leicester City beat Newcastle United 2-0 on 29th September.

His record number of yellow cards for a solitary fixture this season stands at six, a figure he’s given out twice – the amazing 10-goal draw between Aston Villa and Nottingham Forest on 28th November and his most recent game in the draw between Charlton Athletic and Southend United on 9th February.

That follows on from refereeing a total of 42 games during the 2017/18 campaign, a season in which Hooper brandished 129 yellow cards and six red cards throughout the entirety of the campaign. 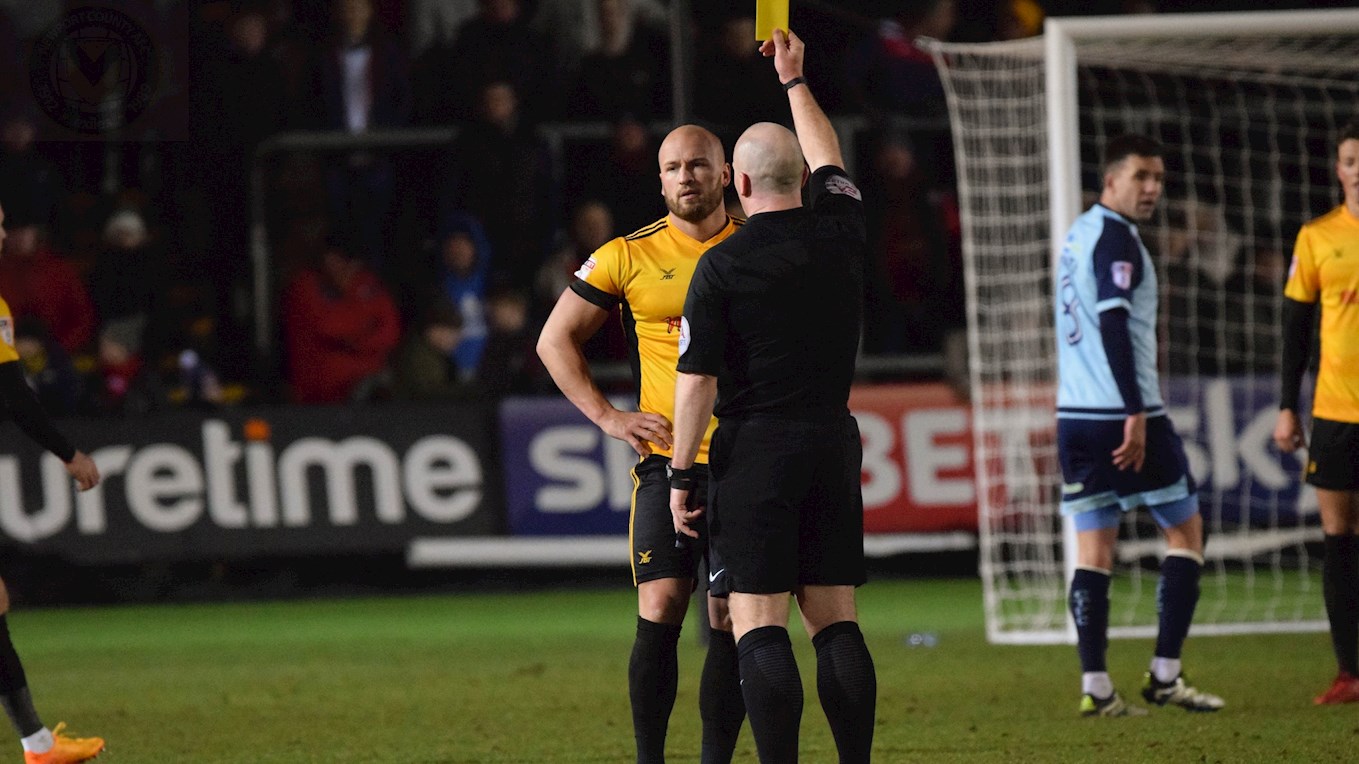 Hooper has officiated a match involving Newport County AFC on three previous occasions in League Two. Something must give on Tuesday night as the Exiles have won one, lost one and drawn once in those previous matches.

Two of those contests came last season, the most recent of which was on Friday 19th January 2018 as the Exiles moved back into the play-off positions with a 2-1 victory over Crawley Town. David Pipe was shown a yellow card.

The other game in the 2017/18 campaign came as a full-strength Cheltenham Town team defeated a much-changed County team with a 2-1 victory at Rodney Parade on 7th November 2017. No bookings for Exiles players.

Before that, the only other time Hooper presided over a County fixture came on 5th April 2014 in the 1-1 draw at Chesterfield. Max Porter scored the equaliser at the Proact Stadium, with County receiving no cautions.

Other fixtures in League Two that night (All 7:45pm kick-offs)

Don’t forget – if you reside outside of the UK, you can watch the game live by subscribing to County’s iFollow service. Commentary by Tim Thraves and Damien Footsoy can also be found at the Match Centre from 19.30pm.