Come and join us for an afternoon of family fun at Newport Stadium on Wednesday 24th July between 2pm and 5pm ahead of our final pre-season fixture against Chelsea Under 23's raising money for former player Fraser Franks.

Clwb Spytty in partnership with the Newport County AFC Supporters Trust are delighted to be hosting this event to celebrate an outstanding 2018/2019 season, the career of Fraser Franks, as well as the launch of Clwb Spytty ahead of the new season.

Fraser joined the Exiles during the last season and quickly becoming a fan favourite.

The 28-year-old, who joined County at the start of this season, has been forced to end his playing career on medical advice due to a heart issue.

Fraser appeared in 320 matches during his senior career, playing for AFC Wimbledon, Welling United, Luton Town, Stevenage and County, scoring 19 goals – including 34 appearances and three goals for the Exiles.

Tickets will be available to purchase on the gate on the evening of the match, with gates open at 5.45pm. The match will kick off at 7pm. Further ticket information will be released soon. 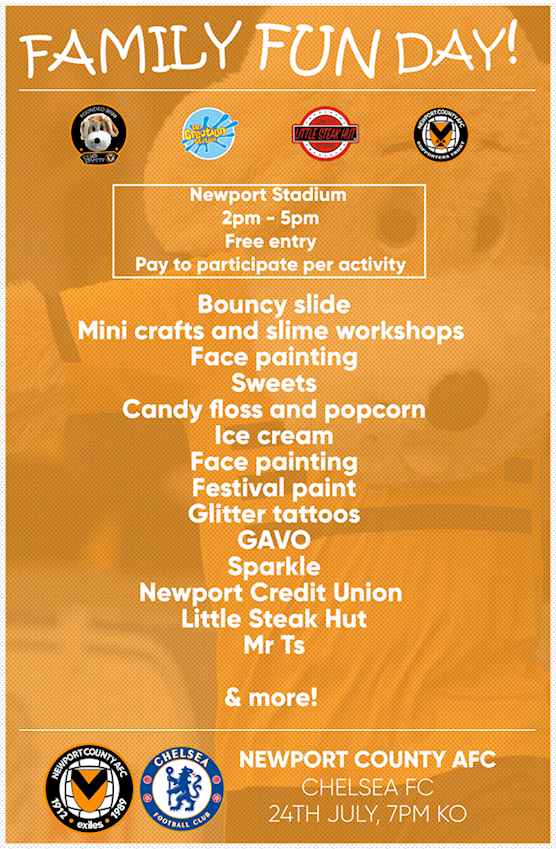 The Club would also like to place on record it's thanks and appreciation to Newport Live for the time and effort put in to host both our Family Fun Day and the friendly match against Chelsea Under 23's. On behalf of all County fans, it is very much appreciated.

We very much look forward to seeing you at our Family Fun Day!