The inaugural Newport Walk for Dementia around the city of Newport was a great success, raising over £6,000 to help people living with dementia.

Around 350 people took part on 7th April including representatives from Newport County, Newport Live chair John Harrhy and other board members, local politicians and councillors including the Mayor Cllr Malcolm Linton.

The 3km walk through the city of Newport was arranged to raise awareness and money for local services in the area for people affected by dementia. As part of the city’s commitment to be Dementia Friendly; Newport County, Newport Live (both Dementia Friendly organisations) and Alzheimer’s Society Cymru worked together on the project.

Cllr Paul Cockeram, who chairs the DFC said “What a great day for our first Dementia memory walk with special thanks to Colin Faulkner of Newport County who initiated the walk. I believe over 300 people including the mascot attended and walked through the city. I would just like to thank all concerned in helping to organise the walk and those who took part in what was a memorable day.”

On Twitter, Jessica Morden, Labour MP for Newport East also expressed her thanks to participants, volunteers and organisers. 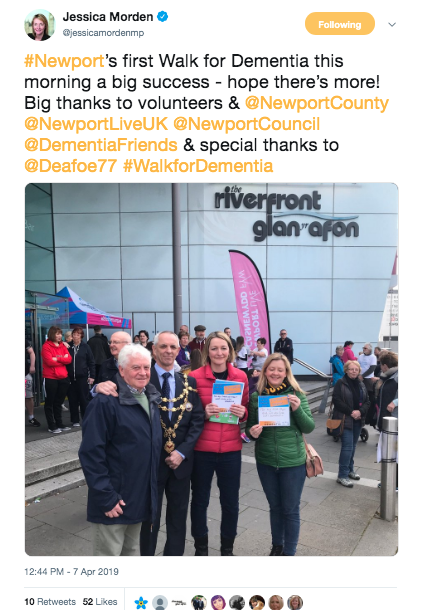 Paula Langston, Regional Fundraising Manager for Alzheimer’s Society Cymru said: "We are truly overwhelmed by the incredible success of this year’s Newport Walk for Dementia. As a result of the hard work and commitment of all involved, over £6,000 has been received to invest in continuing to support people living with the disease in Wales. The walk saw an impressive 350 participants sign up and help towards a world without dementia. Every three minutes someone will hear those dreaded words - you have dementia. This does not just happen to the person living with it but also their career, family, friends and community. Alzheimer’s Society are there for everyone. If you would like to learn more visit our website at www.alzheimers.org.uk."

The walk was made possible due to support from Monmouthshire Building Society, Newport City Council, Newport Bus and Tesco Spytty.

Steve Ward, Chief Executive at Newport Live said “We are so pleased with our partnership with Newport County AFC and the success of the very first Walk for Dementia in the city. We are already planning a bigger and better walk for next year to help raise even more funds for this important cause and that inspires people living in Newport to be happier and healthier.”