Newport County AFC will be looking to continue defying the odds when they host Mansfield Town in the first leg of the League Two play-off semi-finals. The Exiles head into the post-season as the form team, but face a difficult proposition against a Stags side reeling from missing out on automatic promotion last Saturday.

Here, you can find all the facts and statistics ahead of this League Two play-off semi-final clash… 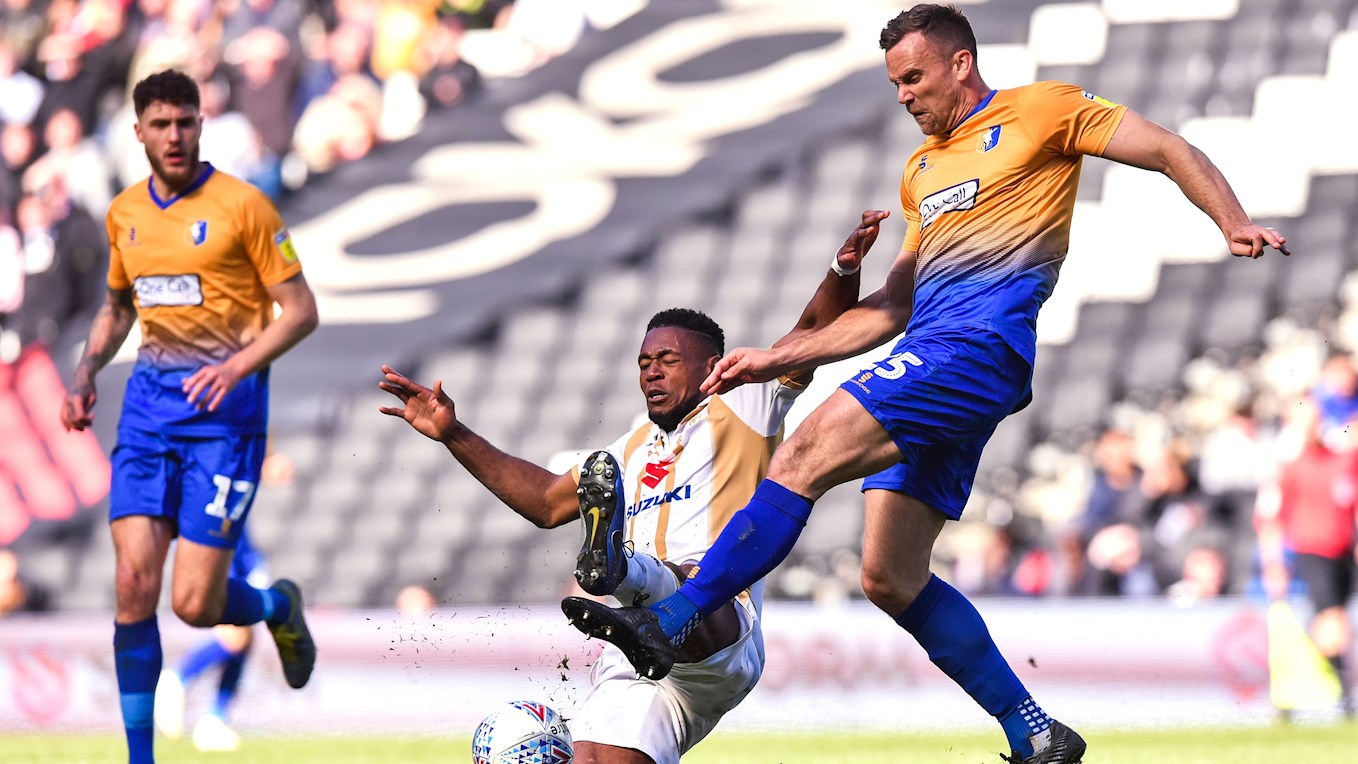 Newport County AFC head into the League Two post-season play-offs as by far the form side having picked up 22 points from the last 30 available, being unbeaten in 10 matches and conceding just three goals.

Their semi-final opponents Mansfield Town will have to pick themselves back up off the canvas after they missed out on automatic promotion against MK Dons last Saturday.

The Stags only needed to draw at Stadium MK but suffered defeat thanks to David Wheeler’s second-minute header, their third successive defeat heading into the play-offs after losing to Oldham Athletic and Stevenage.

Mansfield flirted with automatic promotion all season and before Christmas they looked imperious, losing just once in League Two at home to Exeter City midway through September, but hit rougher waters in the new year and lost a further nine matches before the end of the campaign.

A massive plus point for the Stags, however, heading into the play-offs is their defence. They finished the season with the meanest defensive record in the division, having conceded just 41 goals from the 46 league fixtures. 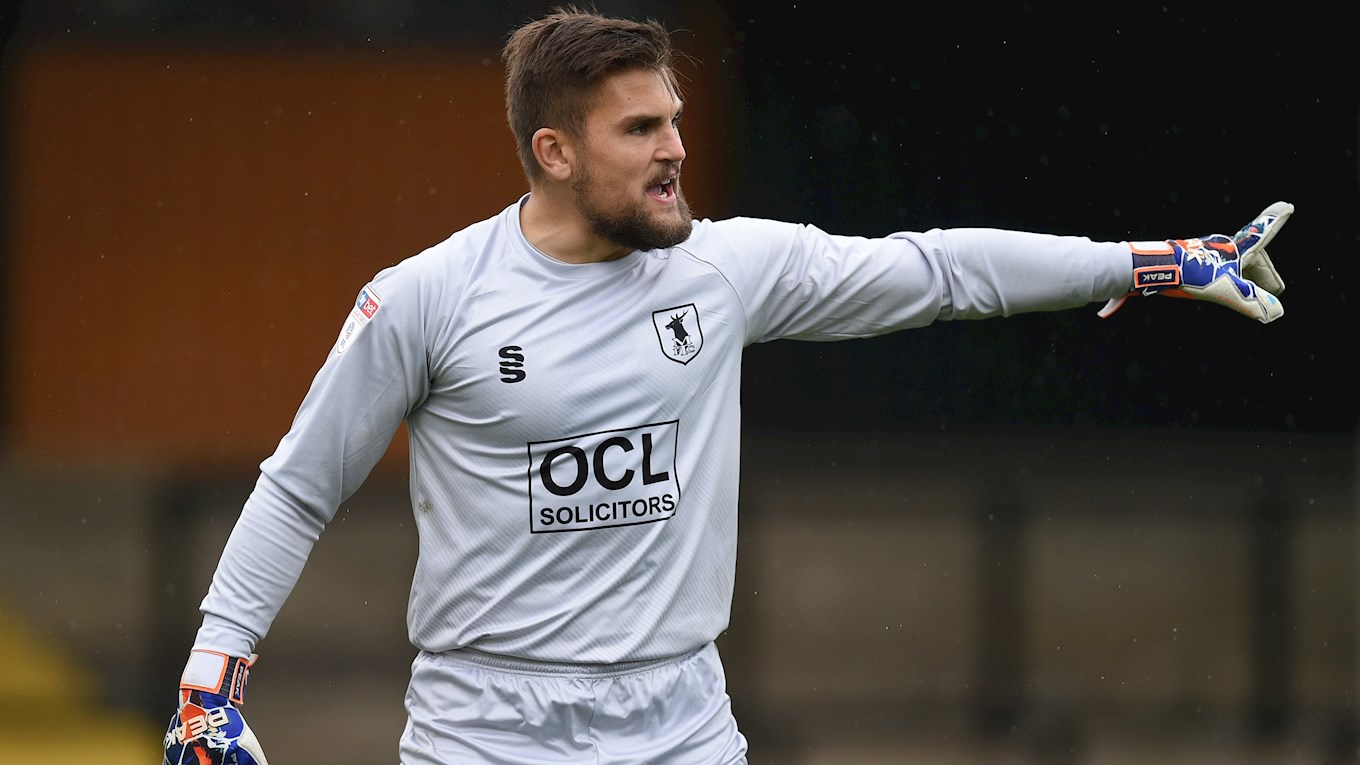 Mansfield Town manager David Flitcroft should be missing up to five long-term injury absentees for the trip to Rodney Parade on Thursday.

Defender Matt Preston withdrew from Saturday’s clash against MK Dons midway through the first-half and a subsequent concussion has ruled him out for both legs of the semi-final.

Midfielder Otis Khan – who scored twice against County on the opening day of the campaign – and defender Ben Turner have returned from their own injury problems in a boost for Flitcroft.

One to watch – Tyler Walker 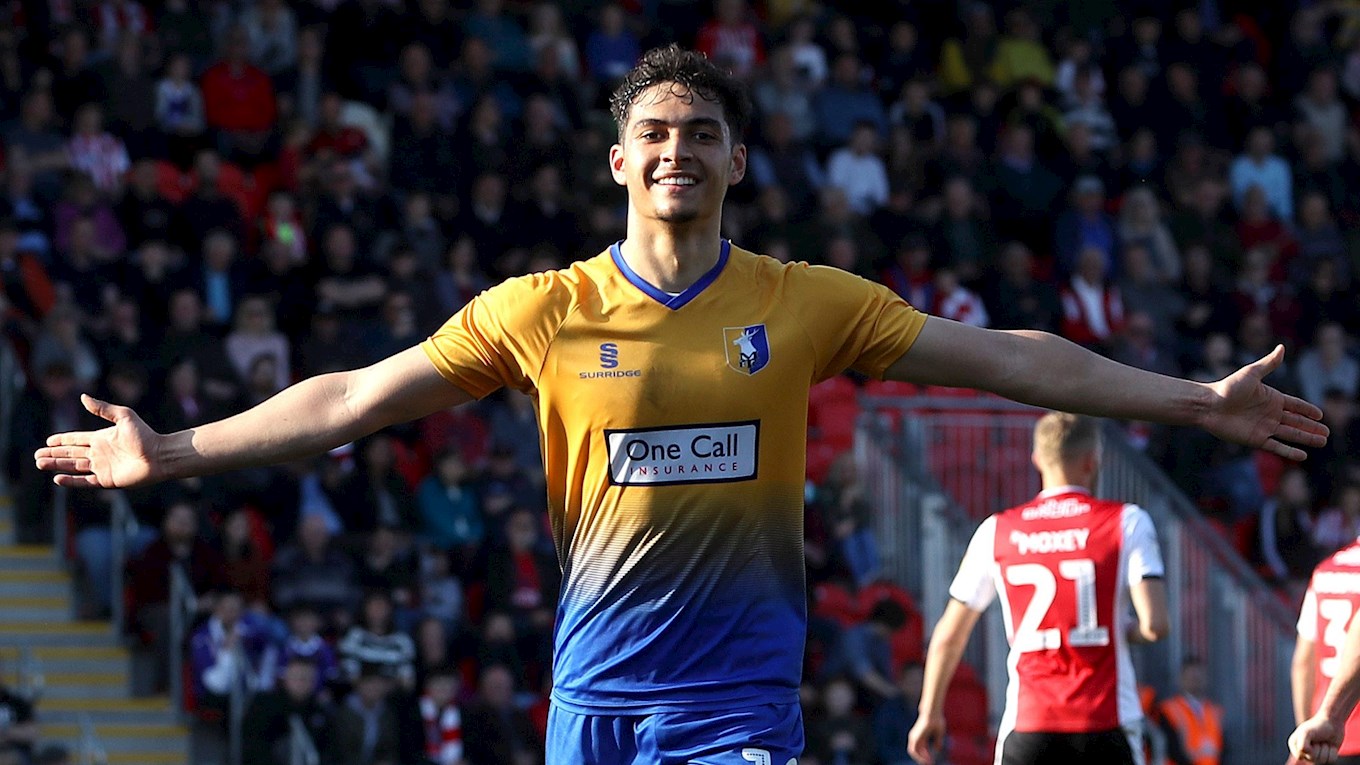 Son of former England international Des, Tyler Walker looks set to have all the attributes required to have a career akin to his father after an unbelievable campaign on loan at Mansfield Town.

Runner up in the League Two Golden Boot competition, Walker hit 22 in the regular league campaign and 26 overall from 50 appearances. This led to the striker rightfully being named in the PFA Team of the Year for the 2018/19 campaign.

Starting the season off in perfect fashion against County on his debut, scoring after just 12 minutes, Walker hasn’t looked back from there and has certainly put his name forward for more inclusion at parent club Nottingham Forest upon his return in the coming weeks.

He’s fleetingly featured for Martin O’Neill’s side since turning professional at the start of the 2014/15 season, notching up 38 Championship appearances to date.

The 22-year old has also spent on loan in the Football League at Burton Albion, Stevenage, Port Vale and Bolton Wanderers. 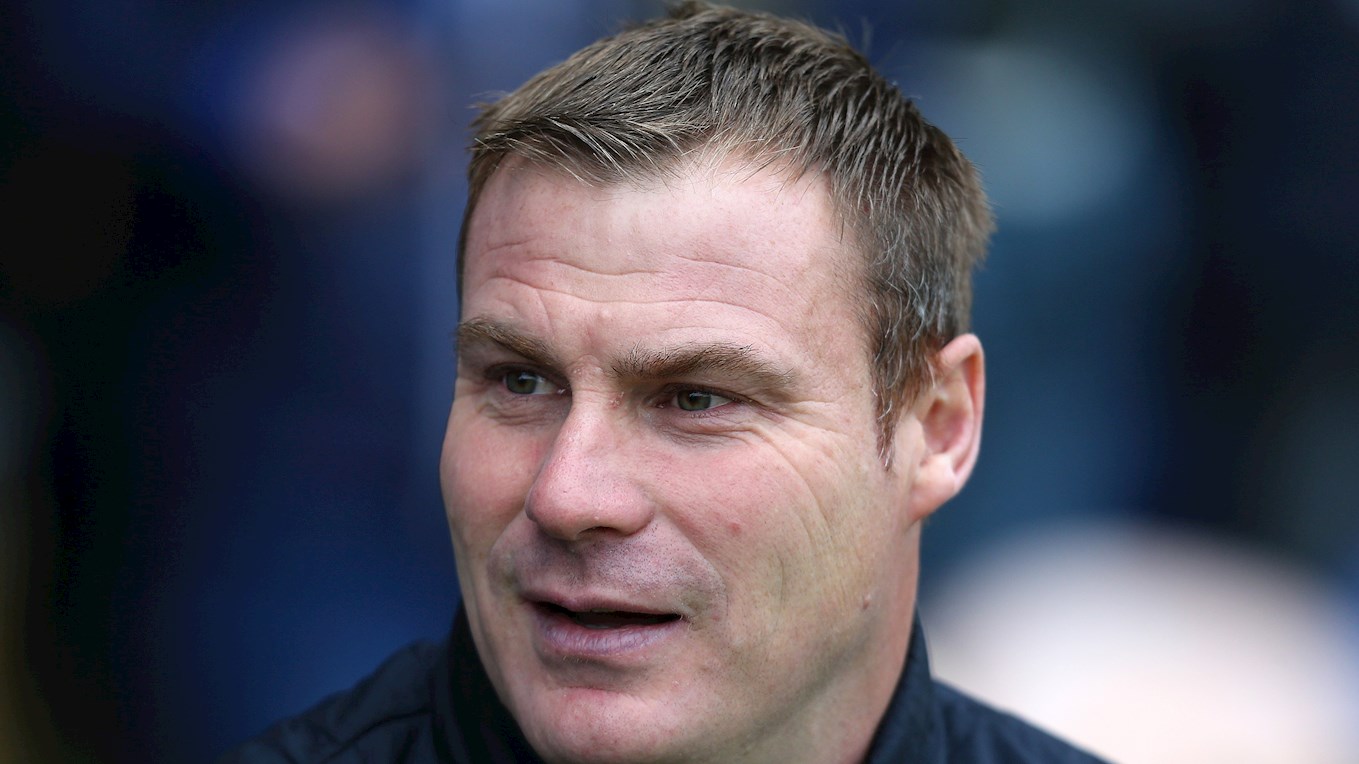 A man with the know-how to get sides out of League Two, David Flitcroft will now be facing a new challenge of trying to get his players inspired for these play-off fixtures after narrowly missing out on automatic promotion last weekend.

To be in with a shout of playing League One football in itself is a remarkable turn of events because eight draws in the opening 12 matches looked to have curtailed any promotion hopes as they only just crept into the top-half as late as November, but some imperious form has seen them in the top-three on and off since Boxing Day.

A lot of credit has to go to Flitcroft as he’s relatively new to the role having taken charge on 1st March 2018 and he’s made Mansfield an extremely difficult side to beat. He’s only lost 17 of his 66 matches in charge, drawing 23 games and winning the remaining 26. 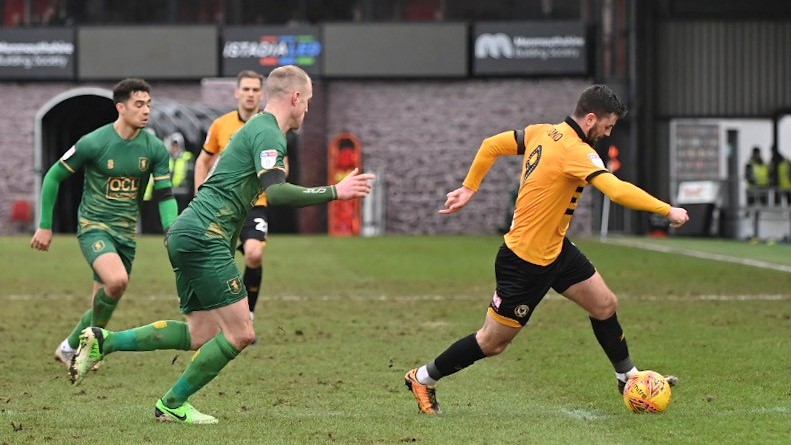 Willmott had also opened the scoring with a sumptuous strike against Middlesbrough four days previous to this one, but his goal this time around turned out to be the match winner as it came in the 15th minute.

Another corner-kick routine designed by assistant manager Wayne Hatswell worked to beneficial effect, Padraig Amond flicking Dan Butler’s delivery to the edge of the area for Willmott to smash into the centre of the goal.

Chances were far and far between from there until stoppage time when Stags captain Krystian Pearce should have ensured a share of the spoils but couldn’t direct his header on target.

That ensured County inflicted Mansfield’s third defeat from 25 league outings and was the result which really gave County the confidence they could reach these post-season play-offs.

Read what Mike Flynn and Tyreeq Bakinson thought of the game. 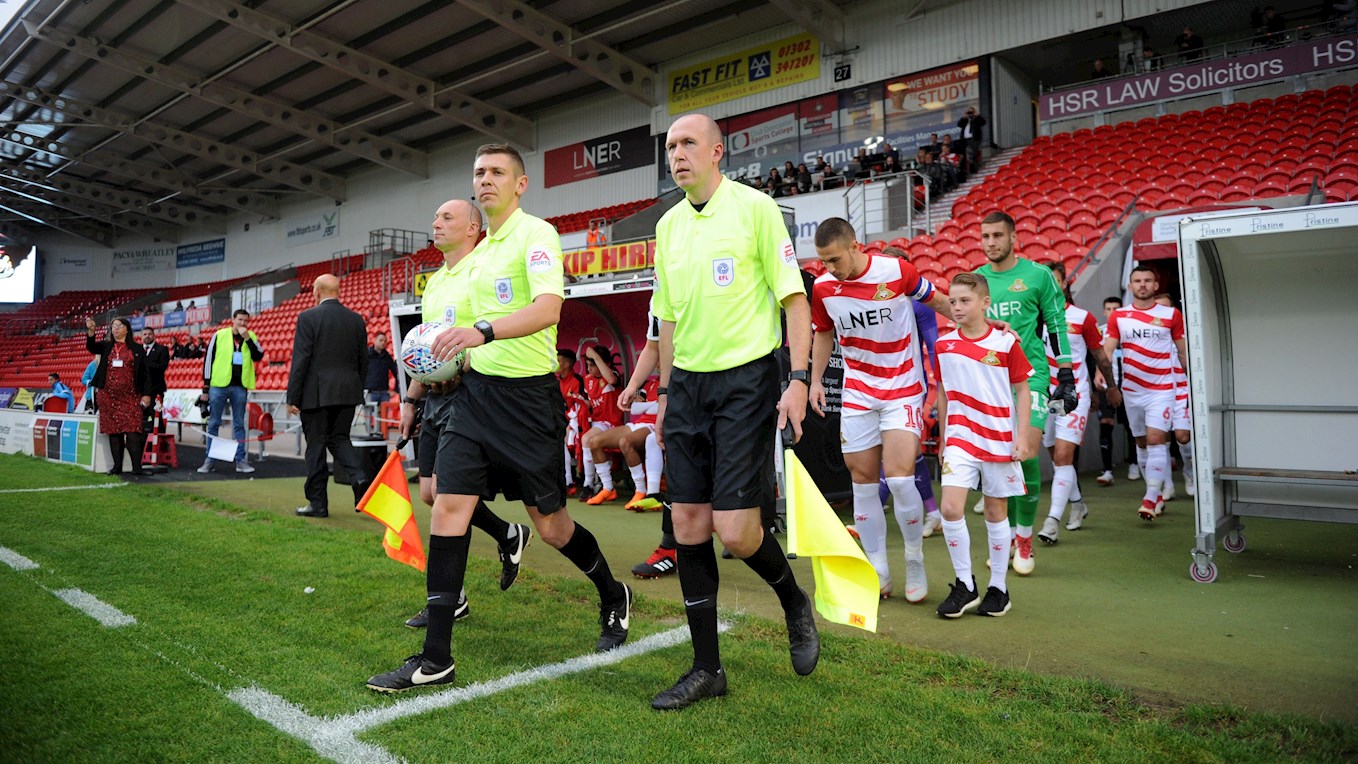 One of the 12 referees promoted to the Football League at the start of the campaign, Matthew Donohue must have impressed throughout the season to be given the opportunity to referee the play-offs in his debut campaign.

He refereed 37 matches in the regular season, giving out 135 yellows cards and seven red cards, starting with four yellow on his League Two debut as Colchester United beat Port Vale on 11th August 2018.

Only one game has passed this season without Donohue going to his pocket – that coming on 6th November as Barnsley and Everton U21s drew in the CheckaTrade Trophy before the League One outfit prevailed on penalties.

His league high number of yellow cards brandished for a solitary fixture stands at eight, a figure he has awarded just once – as AFC Wimbledon did their survival hopes the world of good with a 2-1 victory at Scunthorpe United.

That follows on from Donohue’s final season as a referee in the National League, where he brandished 47 yellow cards and two red cards from 20 matches across the entirety of the campaign.

Donohue has refereed a match involving Newport County AFC on two previous occasions in League Two and the Emirates FA Cup and this will be his first visit to Rodney Parade. The Exiles have a positive record from the previous matches, having won one and drawn the other.

It’s not been that long since Donohue last officiated a County match as he was the man in the middle for the draw with Macclesfield Town on Easter Monday – 22nd April. No bookings for County but Fiacre Kelleher and Kieran O’Hara saw yellow for the Silkmen.

The other match came during this season’s incredible Emirates FA Cup run. It was actually the inaugural game of that run as the Exiles ran out 2-0 winners at Met Police FC on 10th November 2018. Louis Birch was sent off for the home side while Dan Butler and Mickey Demetriou both saw yellows brandished in their direction.

As the game is a play-off first-leg match, no live showing of this fixture will occur on iFollow Exiles but the game will be live on SKY Sports Main Event from 19:30pm.