Newport County AFC will be looking to secure a spot in the play-offs for the first time since returning to the Football League when they go to Morecambe on Saturday. The job is simple – win and top-seven is secured, but the Shrimps will want to spoil the party on their home soil while looking to conclude the season strong. 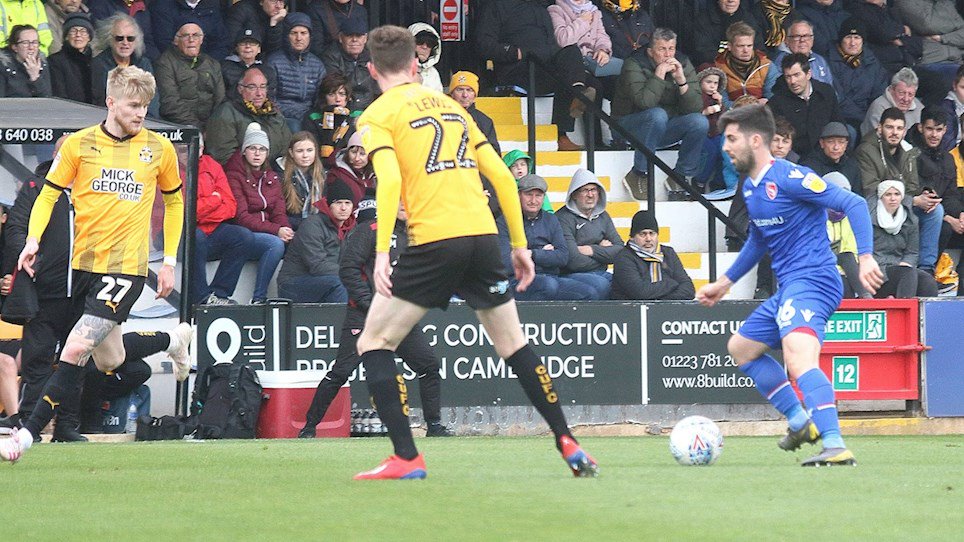 County may be at the very top of the current form table but Morecambe aren’t a million miles away after a good run of form which means they haven’t been worried about relegation for several weeks.

The Shrimps have accumulated eight points from the last 15 available, starting with the 1-1 draw secured at Macclesfield Town on 6th April when Zak Mills saw his goal cancelled out by Elliott Durrell.

Another 1-1 draw then follows, this time at home to Grimsby Town as former Exile Aaron Collins converted a penalty late on only for that to be pegged back by Charles Vernam.

It appears the Shrimps have a knack for repeating results as two 4-0 results in succession then come, although only one was a victory and the other a defeat – the reverse coming at Mansfield Town.

Collins missed a penalty and also scored in the comprehensive success against Cheltenham Town on Easter Monday, Vadaine Oliver, Kevin Ellison and Sam Lavelle also finding their names on the scoresheet.

Last Saturday, the good form continued as they battled to a 2-1 success at Cambridge United, who despite losing were definitely confirmed as safe for another season. Collins kept his purple patch going with a neat finish, while Jordan Cranston also scored to put Morecambe 18th in the League Two table. 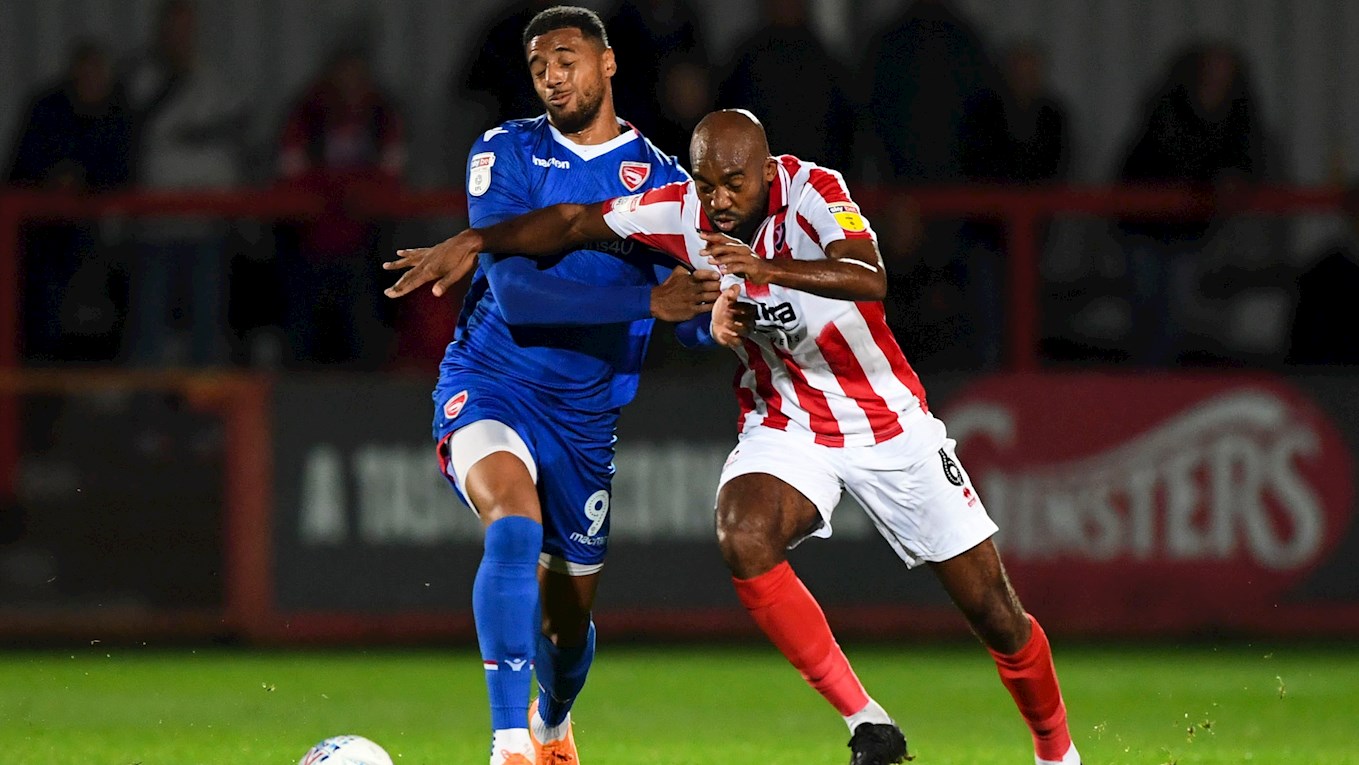 Morecambe manager Jim Bentley will have a full squad at his disposal as they prepare to welcome County to Lancashire for the final regular fixture of the 2018/19 season.

Striker Vadaine Oliver proved he had fully recovered from a knee injury by starting at Cambridge United last weekend, and there are no other injury concerns.

With the Shrimps safe, Bentley may choose to rotate his squad, but they’ve been on some good form lately and he may want to finish the campaign on a high with the same matchday squad.

One to Watch – Aaron Collins 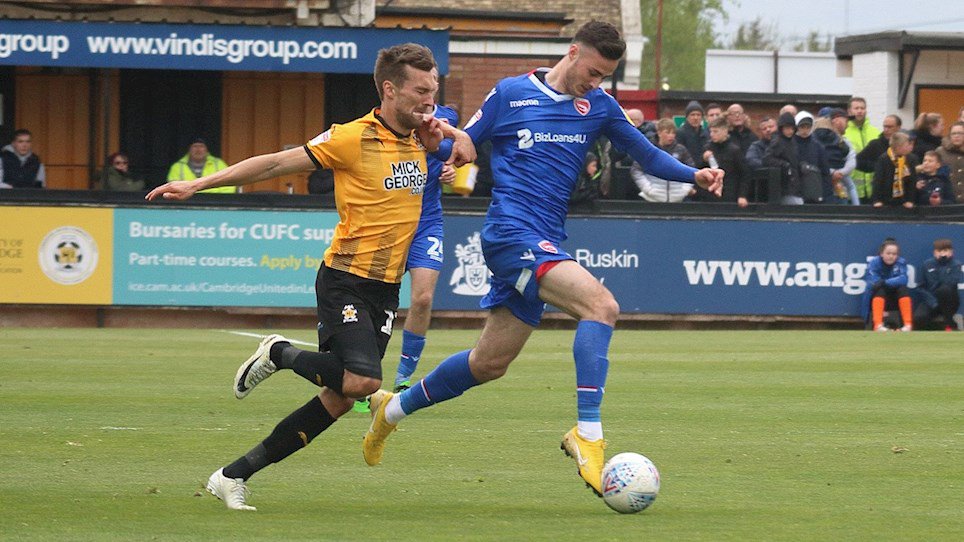 Based on recent statistics, there aren’t many in better form in League Two than former Newport County AFC academy graduate Aaron Collins.

The 21-year old hasn’t even been with the Shrimps for four months yet and he’s already joint top scorer, netting seven from 14 appearances, including three in his last four.

He found the net on his debut with the late matchwinner at Port Vale, before backing that up with further goals against Oldham Athletic, Forest Green Rovers, MK Dons, Grimsby Town, Cheltenham Town and Morecambe.

Afforded his first opportunity in the Football League with County back in April 2015 against Dagenham & Redbridge, Collins also spent time on loan at Rodney Parade last season and netted three goals in 35 appearances across both spells in all competitions.

His performances first time around in South Wales earnt him a move to now Premier League side Wolverhampton Wanderers, who he left in January to join Morecambe. Collins has also featured for Merthyr Town, Notts County, Tranmere Rovers, Maidstone United and Colchester United. 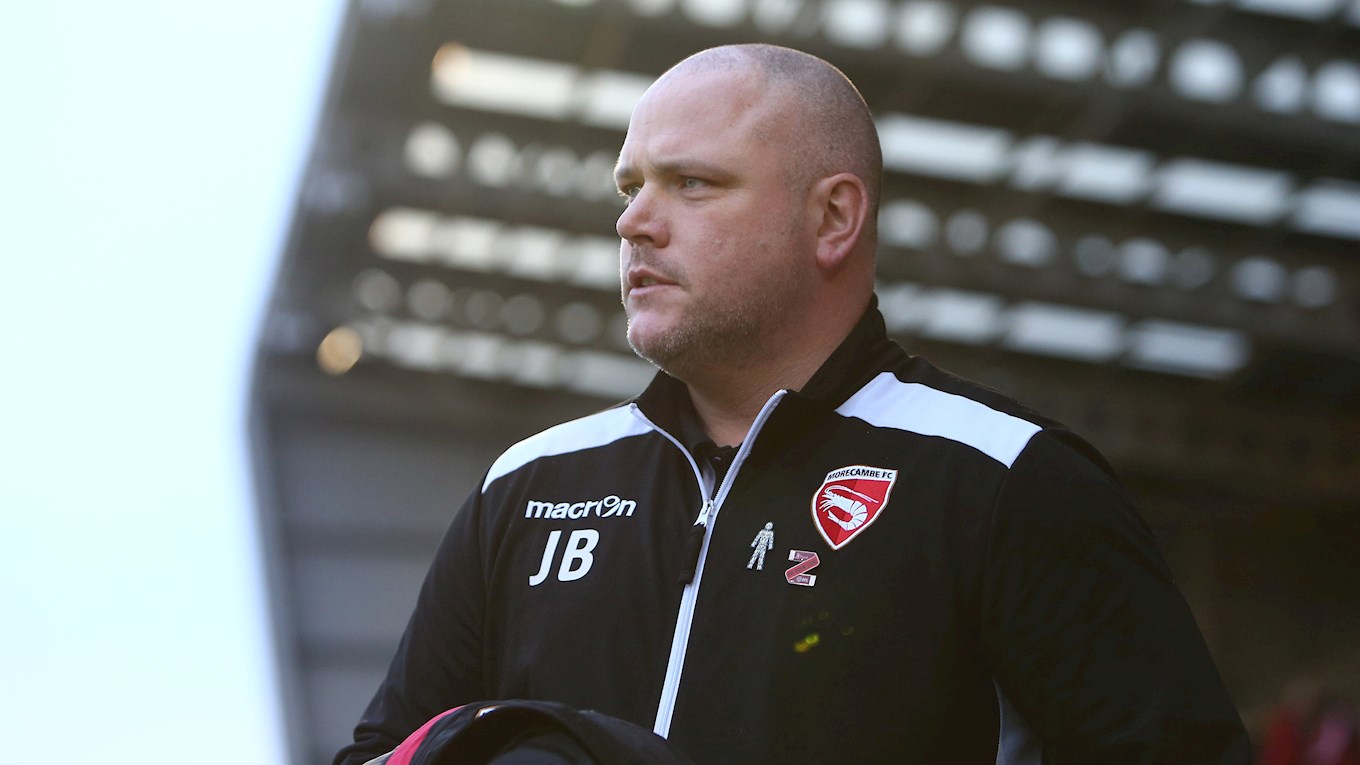 Working on the smallest budget in the division most seasons, Bentley initially ascended to the hot seat ahead of the 2011/12 campaign and the Shrimps have stayed in League Two ever since.

Always the bookies favourites to be relegated, Morecambe continually defy the odds under Bentley and McKenna’s guidance, with the Shrimps securing their safety with several games to spare this time around in another fantastic season.

Speaking after last Saturday’s victory at Cambridge United, Bentley said: “We’re in good form. I’d like to see a league table from the turn of the year. It’s all gone well and there’s a real feelgood factor. Long may that continue.”

Bentley will welcome County to Lancashire with a 29.3% win-ratio as Morecambe manager. The Shrimps have tasted success on 121 occasions from 413 matches, drawing 112 and losing the remaining 180. 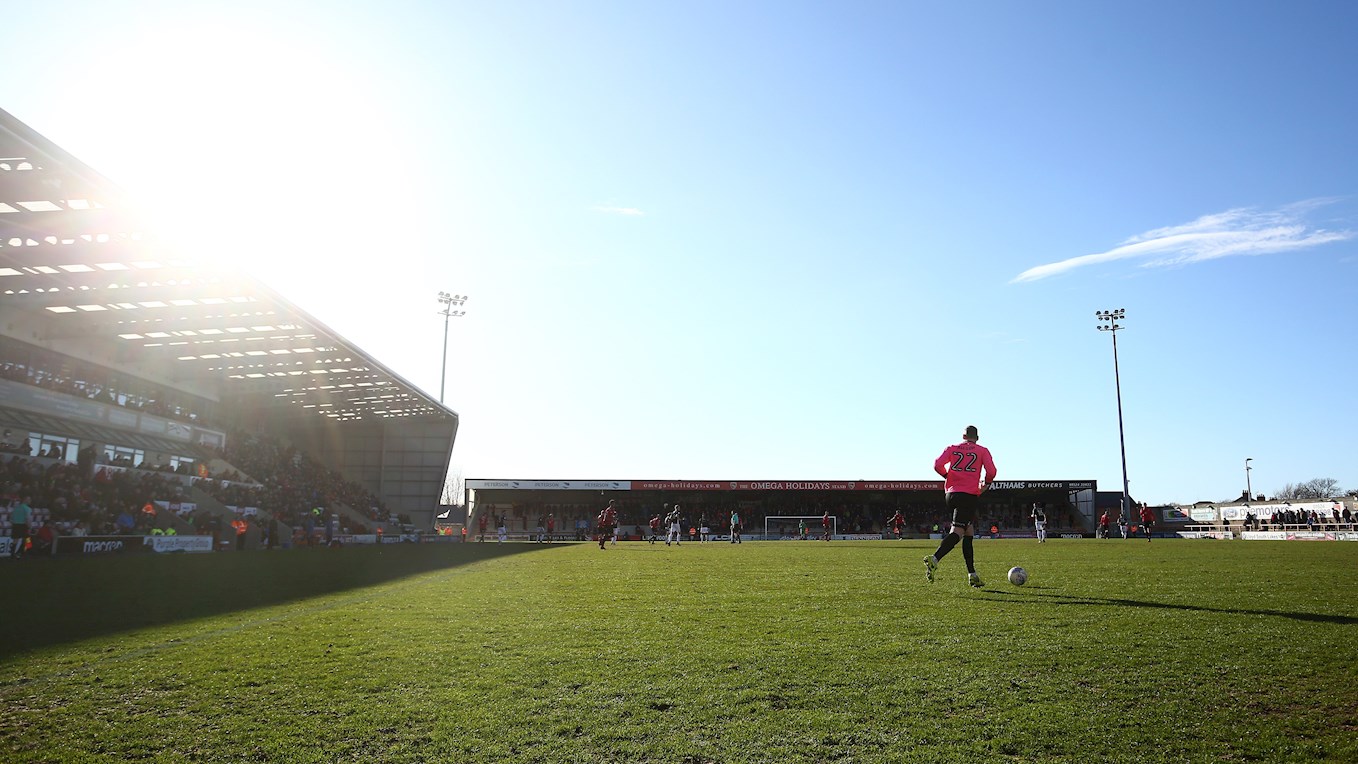 One of the smaller stadiums in League Two, The Globe Arena might just be covered in Amber and Black come kick-off with so much to play for in Lancashire for the away side.

Always a favourite destination for the media such is the quality of pie served up pre-match, The Globe Arena has an official capacity of 6,476, of which just over 2,000 is seated and the rest terracing.

On matchday, County fans will have a mixture of terracing behind one goal and some seating in the main stand of the stadium. Well over 1,000 away supporters can be accommodated and the players really need YOUR support to help achieve a play-off position.

Fortunately, the Exiles have a better record in Morecambe than in South Wales as they’ve never beaten the Shrimps at Rodney Parade. They have, however, picked up six points in Lancashire and a third win would be priceless this time around.

Arguably, the most important of the victories came in the Great Escape as Ryan Bird’s penalty gave Mike Flynn his second successive victory in temporary charge of the Exiles. 48 supporters made that trip on Tuesday 14th March 2017. 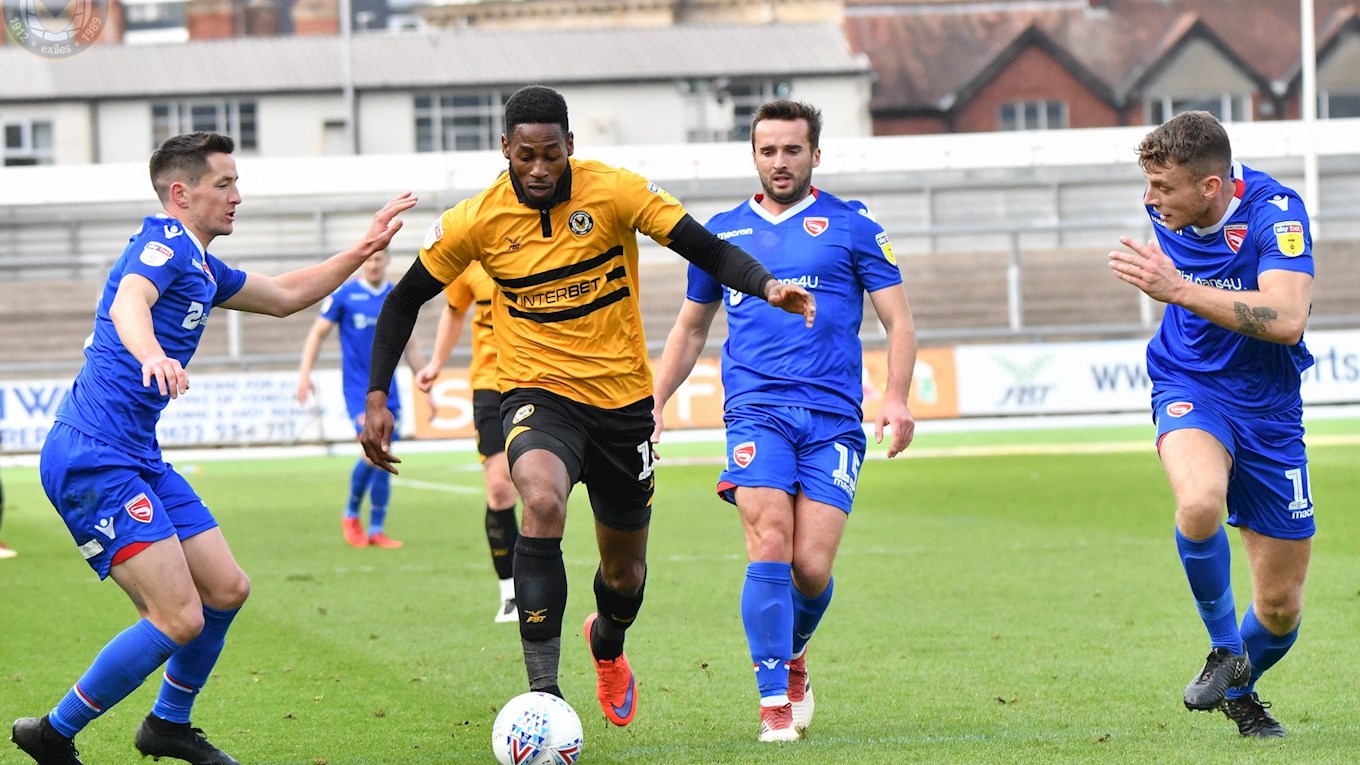 Padraig Amond scored Newport County AFC’s fastest goal of the 2018/19 season so far but it wasn’t enough for all three points at Rodney Parade as a familiar nemesis ensured a share of the spoils.

Just 19 seconds were on the clock when the Irishman converted the early chance, Morecambe only had two touches in that time including a fantastic save from Barry Roche to deny Jamille Matt, but Amond was on hand to head home the rebound.

Antoine Semenyo, Matty Dolan and Matt all came close again before half-time, while Tyler Forbes nearly bagged his first County goal after the restart but was denied by the outstretched leg of Shrimps defender Zak Mills.

Despite not asserting any real dominance on proceedings, Morecambe found a way to level with 13 minutes remaining and it doesn’t take a rocket scientist to work out who converted the rare chance when it came.

Forbes’ slip allowed Kevin Ellison to burst clear and he didn’t need another invitation to score his sixth goal against the Exiles from 11 appearances. Morecambe maintained their unbeaten record away in South Wales.

Read what Mike Flynn and Robbie Willmott thought of the game. 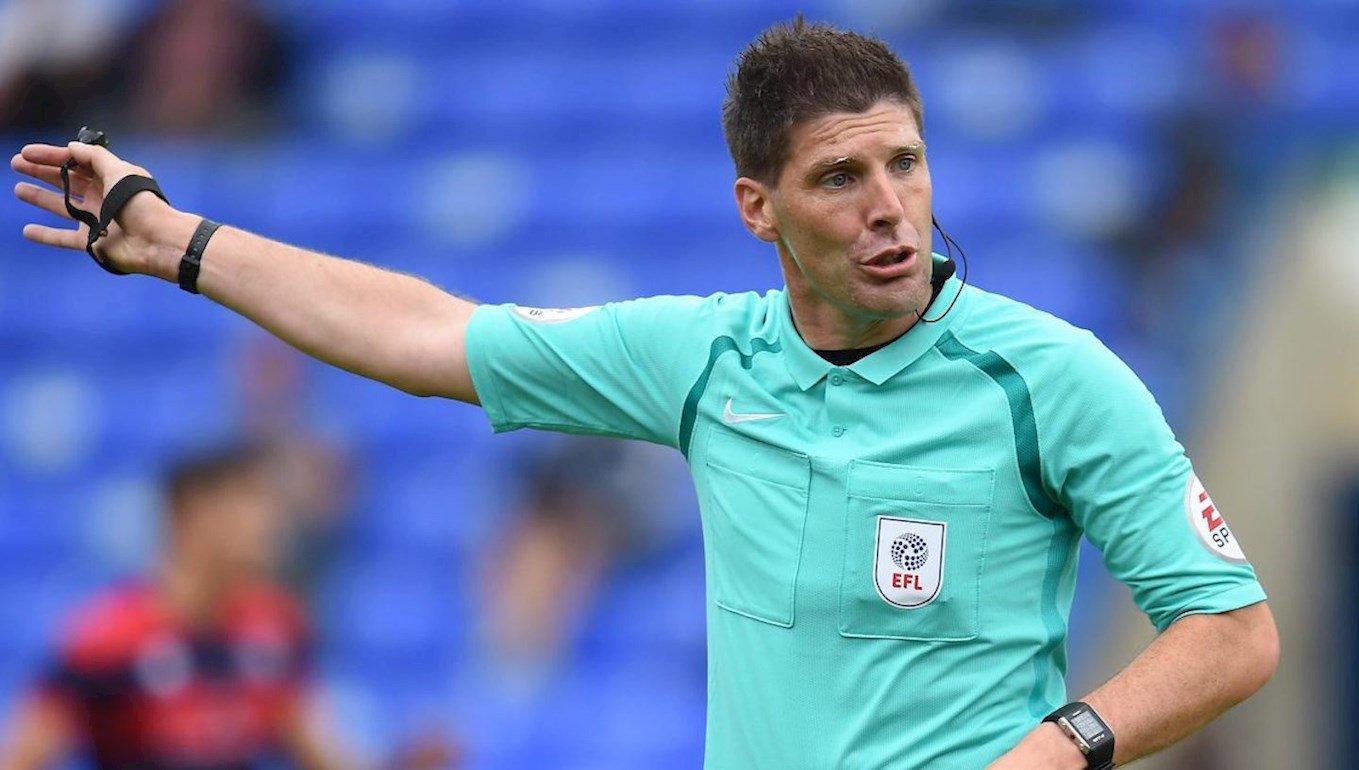 One of the 12 referees promoted from the National League at the start of the campaign, Hair is about to conclude his first season as a Football League referee having taken charge of his first League Two fixture on 4th August 2018 as MK Dons won away at Oldham Athletic.

He has refereed 29 matches thus far this season, giving out 97 yellow cards and seven red cards, including six yellows in his last game on 6th April as AFC Wimbledon and Accrington Stanley played out a 1-1 draw.

Just the one match has passed this season without Hair going to his pocket – that coming as Lincoln City and Carlisle United played out a high-scoring 2-2 draw at Sincil Bank on 23rd October.

His record number of yellow cards for a solitary fixture this season comes in at seven, something he’s only done once, as Mansfield Town scored in stoppage time to salvage a 2-2 draw at Cheltenham Town on 3rd November.

That follows on from refereeing a total of 26 games during the 2017/18 campaign, a season in which Hair brandished 81 yellow cards and three red cards throughout the entirety of the campaign. 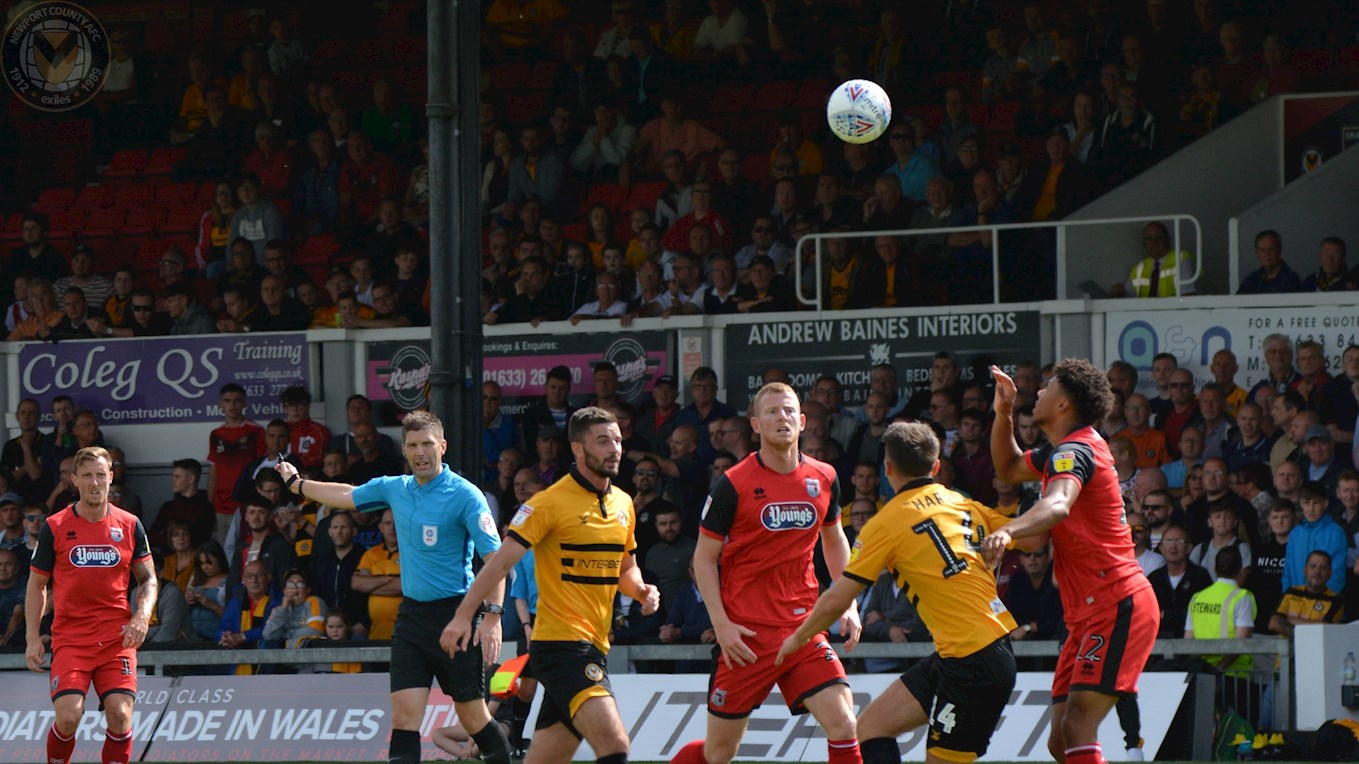 Hair has refereed a match involving Newport County AFC on two previous occasions, both of which came at Rodney Parade. The Exiles have a good record from the matches, having not conceded a goal in either contest and accumulated four points.

Both matches came earlier in this campaign, starting on 25th August 2018 when Matty Dolan’s free-kick secured a 1-0 victory over Grimsby Town. Dan Butler saw a yellow brandished in his direction, while Mariners attacker Wes Thomas was dismissed.

Hair again dismissed a visiting player when County were held to a 0-0 draw with Port Vale on 29th January 2019. This time James Gibbons was the man sent for an early bath, with Robbie Willmott booked from a County perspective.