It took Newport County AFC 100 years to get there for the first time, but on Saturday, they will contest their fourth match at Wembley Stadium in just seven seasons when they face off against Micky Mellon's Tranmere Rovers in the League Two play-off final.

Most clubs currently occupying spots in the Premier League can’t boast going to the national stadium as many times as the Exiles, and it’s poised to be another memorable occasion for the army of supporters heading with the team from South Wales.

Here, you can re-live the other occasions that County have graced the hallowed turf of Wembley Stadium…

Newport County AFC took advantage of Premier League heavyweights Tottenham Hotspur needing to use Wembley while their new home stadium was being constructed by contesting an Emirates FA Cup replay there 15 months ago.

Cheered on by 7,200 travelling Exiles – the highest ever away attendance at a Tottenham home match – the game did bring an end to a fantastic run in the competition but no one could be left too disappointed by being knocked out at such a prestigious venue.

Ahead of the game, Mauricio Pochettino made ten changes to the side which drew at Anfield three days previous, and those alterations affected the side early on as County made the brighter start.

That caused Pochettino to send a few water bottles flying around the technical area as he continued his search for a first trophy at the club, and his side clearly got the message as Danny Rose should have scored on 23 minutes but wastefully hit the side netting.

Tottenham were now well and truly in the groove and got the two goals required to seal their progression to the Fifth Round before half-time.

Dan Butler inadvertently directed a Moussa Sissoko cross into his own net on 26 minutes, before Heung-Min Son threaded a pass through the eye of a needle to set up Erik Lamela for his first goal since September 2016 just eight minutes later.

From that moment on, there was sadly only going to be one outcome. Lamela should really have finished with more than one goal and Tottenham, for whom Fernando Llorente missed a couple of sitters, should have won by a greater margin.

But they didn’t add to their tally because of a monumental defensive performance after the restart from the Exiles and a couple of heroic saves from Joe Day.

Tottenham’s Spanish striker – brought in as Harry Kane was rested – saw a low drive saved well by the County shot stopper, before sending a header then a volley past the far post from excellent Christian Eriksen crosses.

Substitute Deli Alli shook the crossbar after a mesmerising run from inside his own half, but this wasn’t a backs against the wall performance from County who almost set up a grandstand finale in stoppage time.

Some neat interchange around the Spurs penalty area gave Padraig Amond a small window to shoot but Michel Vorm got down well to deny the Exiles talisman.

Read what Mauricio Pochettino said about facing the Exiles. 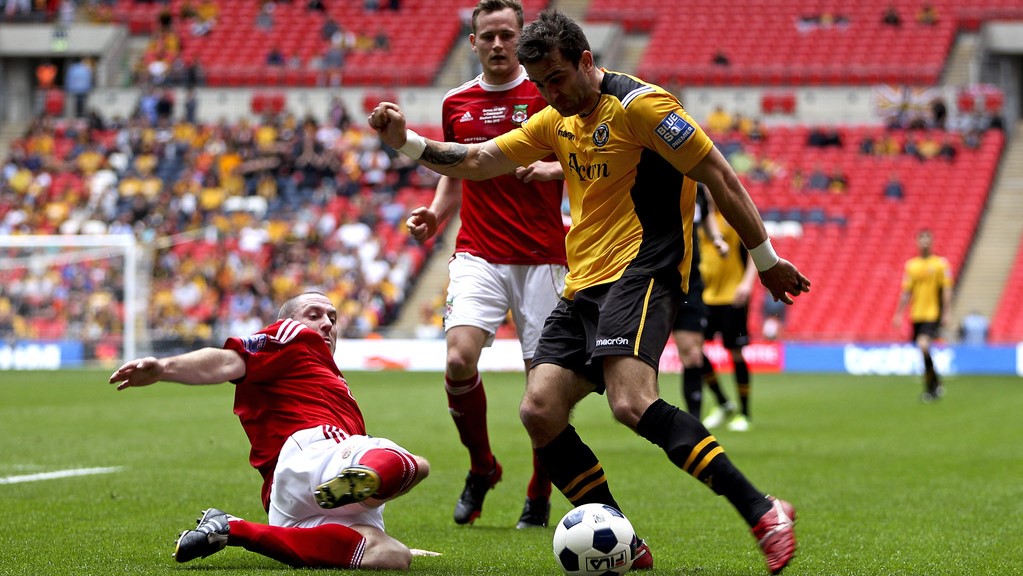 A victory against Tranmere Rovers on Saturday would arguably eclipse this result, but as it stands, this has to be up there as the greatest ever result since reformation in 1989 as Newport County AFC returned to the Football League following a 25-year absence with a 2-0 win over Welsh-rivals Wrexham AFC in the Conference Play-off final.

Manager Michael Flynn – who played 74 minutes of this fixture from midfield – admitted after the shootout victory over Mansfield Town earlier this month that County weren’t the better team in this fixture, but the Exiles found a way to win and ensure Wembley was turned black and amber for the afternoon.

Wrexham AFC really should have scored at some point as Brett Ormerod missed two glorious opportunities – the second a sitter from virtually underneath the crossbar – and Johnny Hunt also failed to hit the target.

Hunt also forced Lenny Pidgeley into a smart save on 63 minutes as the Exiles shot stopper kept the opponents at bay and gave County a platform to build upon.

The game was on a knife-edge heading into the concluding moments and County made sure that their Welsh counterparts would rue their hatful of chances by taking the lead with four minutes to go.

Andy Sandell’s clearance downfield was more hit in hope than expectation, but now Crewe Alexandra manager Dave Artell misread the situation to put Christian Jolley in on goal to give County the lead. Cue the most perfect piece of commentary from Tim Thraves that aptly summed up the magnitude of the goal.

Not Tim nor anyone else in the County end had probably stopped celebrating before it was two and the Exiles could see their name amongst the elite of the Football League.

Manager Justin Edinburgh said: “It’s the best moment of my career. As a player you have a chance to affect it but as manager it’s all or nothing. This win means so much to so many people. This is life-changing for me and I have accomplished what I set out to do. I’m so proud.”

Need any more incentive to re-watch the game? Try the extended highlights with what was an inch-perfect commentary performance from Tim Thraves. 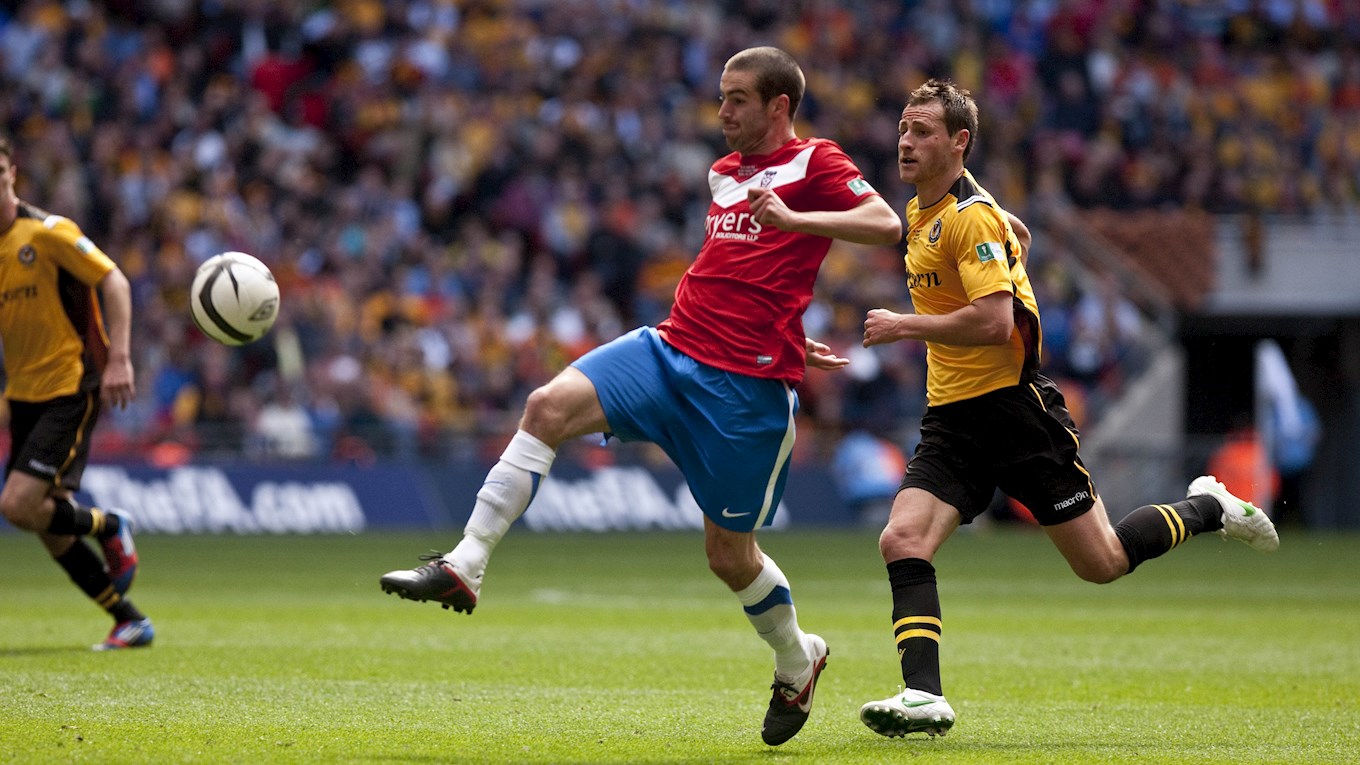 Not the result Newport County AFC would have wanted on their first visit to the national stadium as York City won the FA Trophy for the first time in their history with a 2-0 victory.

As Tim Thraves pointed out in the media car to Mansfield Town last Sunday – the Exiles have played a further twice apart from this game on 12th May. One of those was the penalty shootout victory earlier this month and the other 3-0 at Shrewsbury Town in 1980 in the second leg of the Welsh Cup final. Those were better days.

Anyway, despite the result, it was still a monumental occasion for the team to step out on Wembley Way for the first time in a season where they only just scraped survival in the Conference.

There was unfortunately an issue with loan registration ahead of the game meaning County were missing some of those members integral to the revolution under Justin Edinburgh, who took over in the October of the campaign.

Despite that, County started on the front foot but were guilty of misfiring in-front of goal. Romone Rose really should have scored early on but hit his shot straight at Matt Ingram when in one-on-one.

Rose and Nat Jarvis also missed the target in a first half dominated by County, but York perked up after the restart and left the national stadium with the FA Trophy in their grasp.

On 65 minutes, Ashley Chambers dinked a clever ball between the County centre-halves for Matty Blair to lift it over a helpless Glyn Thompson, who had ventured erratically from his goalmouth.

Man Of The Match Lanre Oyebanjo swiftly doubled the advantage eight minutes later when tapping home another inch-perfect delivery from Chambers, York completing the first part of a Wembley double as they beat Luton Town in the Conference play-off final eight days later.

Manager Justin Edinburgh said: “Obviously we’re disappointed to lose in a final. We didn’t take our chances when they came along today and that is what has cost us. The players gave it everything they had but when you get those kinds of chances you have to bury them.”