Who are Show Racism The Red Card?

Show Racism The Red Card is an anti-racism educational charity.

They aim to combat racism through enabling role models, who are predominately but not exclusively footballers, to present an anti-racist message to young people and others.

To this day SRtRC continues to utilise the high-profile status of football and football players to help tackle racism in society and has also expanded into other sports.

The majority of the campaign’s work involves the delivery of educational workshops to young people and adults in schools, workplaces and at events held in football stadiums. Across the UK, SRtRC provides educational sessions to more than 50,000 individuals per year.

After watching an informative video, Jamille took part in a fake press conference where lots of the pupils (or fake journalists, if you'd rather!) asked questions of Jamille all kinds of questions.

Shortly after the event, Jamille tweeted: 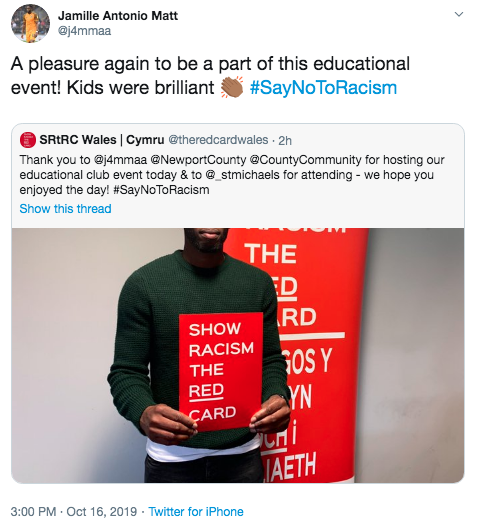 Keep an eye out at this weekend's Scunthorpe United match at Rodney Parade, where all NCAFC players will be showcasing SRtRC t-shirts in the pre-match warm-up.

Tickets are still available for that game. Click here to purchase.

Find out more about SRtRC by clicking here.