In a repeat of the game in 2013, the Exiles will again head to Adams Park to face Wycombe Wanderers on Boxing Day. A solitary lob from Mike Flynn was enough to hand the Exiles all three points back then, in what was the last time Wycombe lost on Boxing Day.

The Exiles head to Wycombe on Boxing Day to face one of the form sides in League 2.

They have picked up ten points from the last 18 available, the fifth best points haul for the league in that time, after three wins, one draw and two defeats from their last six games.

That run starts with a victory, their first in six league games at the time, as they secured a 4-0 home victory against Crawley Town.

Craig Mackail-Smith scored an 11-minute hat-trick in the second-half to set the Chairboys on the path to victory, while QPR loanee Eberechi Eze also scored.

They failed to score in their next game, however, as they suffered a 1-0 defeat to fellow play-off hopefuls Accrington Stanley.

But they returned to winning ways in their next game following a 2-1 success at home to Yeovil. Eze scored again, while a Joe Jacobson penalty secured the victory.

The Chairboys failed to score on the road again in the 0-0 draw against Stevenage, before they secured yet another home victory, their seventh in the past nine games at Adams Park, thanks to Luke O’Nien’s winner against Chesterfield.

Wycombe’s last game did in-fact end in defeat, as they were edged out 3-2 at Coventry City in Friday Night Football.

Birmingham City loanee Dan Scarr and another Jacobson penalty saw Wycombe level proceedings after being 2-0 down, although a double from Coventry striker Marc McNulty and a goal of the season contender from captain Michael Doyle ultimately saw off the Chairboys.

All this means the home side reside in fifth place in the League 2 table ahead of County’s visit to Adams Park, just two points clear of the Exiles. 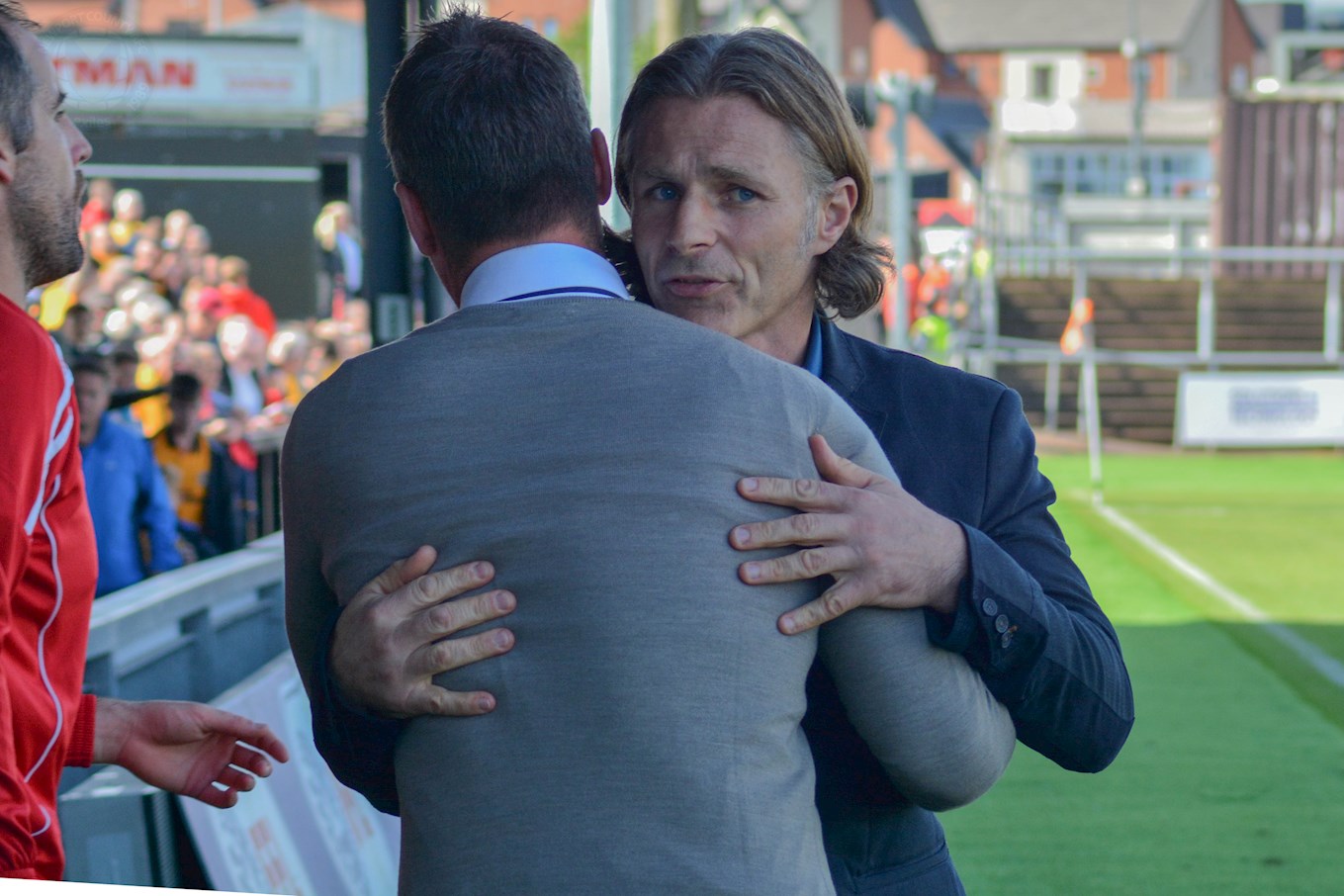 The Chairboys have several injury headaches ahead of our visit.

Captain Adam El-Abd is expected to sit out the game with the injury that forced him to miss the Coventry game on Friday, as midfielder Marcus Bean also missed out through injury.

All these injury concerns meant Ainsworth had to make two changes to his side on Friday night, as Matt Bloomfield and Dan Scarr came in to the 4-3-3 system.

One to Watch – Joe Jacobson 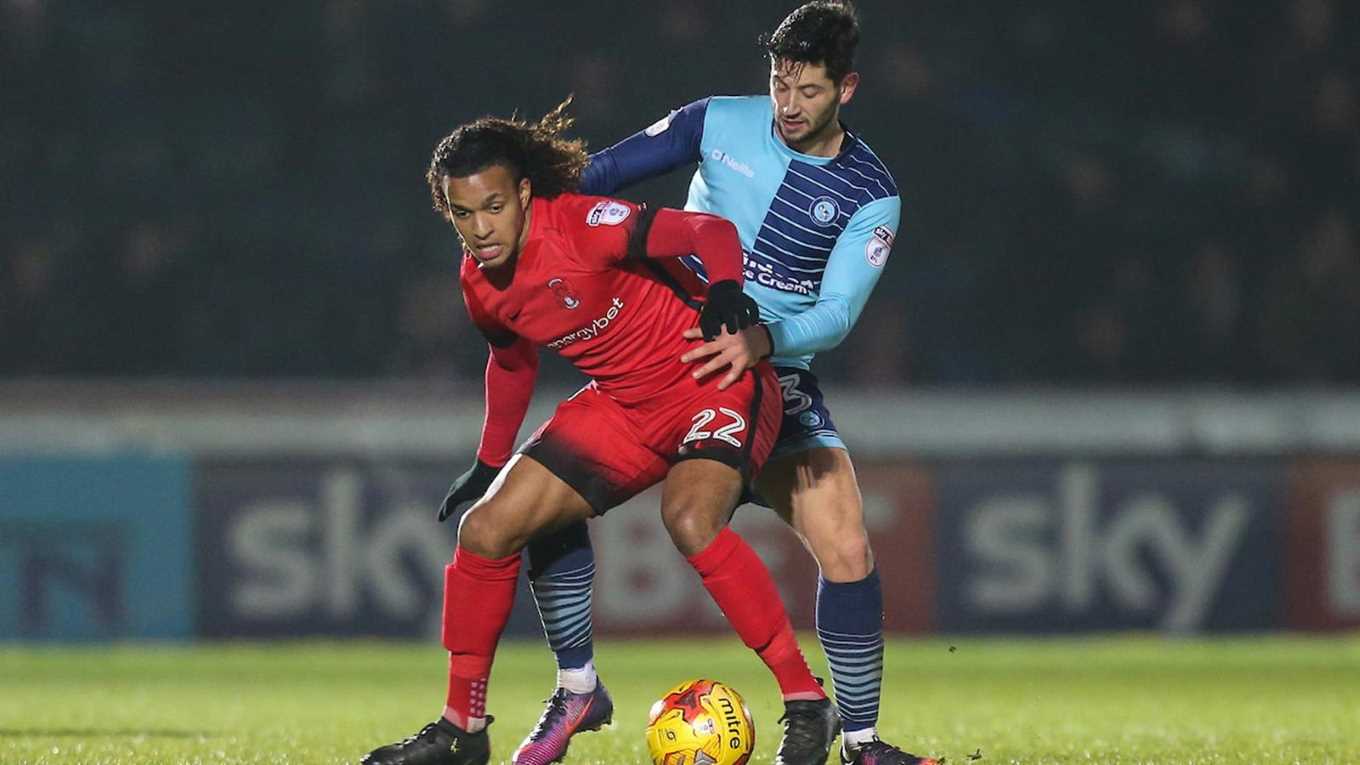 Jacobson has been a mainstay in the Wycombe side since his free transfer to the club in the summer of 2014.

He is part of a defence that has conceded the most amount of goals out of the top 13 sides, although has five goals to his name this campaign.

Three of those have come at Adams Park and he has been responsible for winning his side two points. His penalty secured a 2-1 win over Yeovil Town, while also netting against Notts County and Lincoln City.

He has also scored at Grimsby and on Friday at Coventry City, in what is his 13th season as a professional footballer.

The Cardiff born left-back started his career with his hometown team and went on to make his professional debut for the Bluebirds against Norwich City on 22nd April 2006.

Jacobson made one further appearance for the club but found game time hard to come by and moved to Bristol Rovers following a loan spell at the club and also with Accrington Stanley.

The 31-year old won supporters young player of the year in 2008 while helping the club to the quarter-finals of the Emirates FA Cup and promotion to League 1.

But Jacobson was released at the end of the 2008/09 season and moved on to Oldham Athletic.

He found match minutes hard to come by there as-well, so moved to Accrington after having another loan stint at the Lancashire club.

A brief spell with the club came to an end in preparation for the 2012/13 season as Jacobson moved to Shrewsbury Town. He played in nearly every game that season for the side, triggering a contract extension, but couldn’t prevent relegation in his second season.

That saw the defender move to Wycombe in his most recent move, as Jacobson has scored more than 20 goals from over 400 professional appearances.

Jacobson also made several appearances for the Welsh U21 side earlier in his career. He has been called up to the full squad for several friendlies, mostly under John Toshack’s reign, although has yet to take to the field. 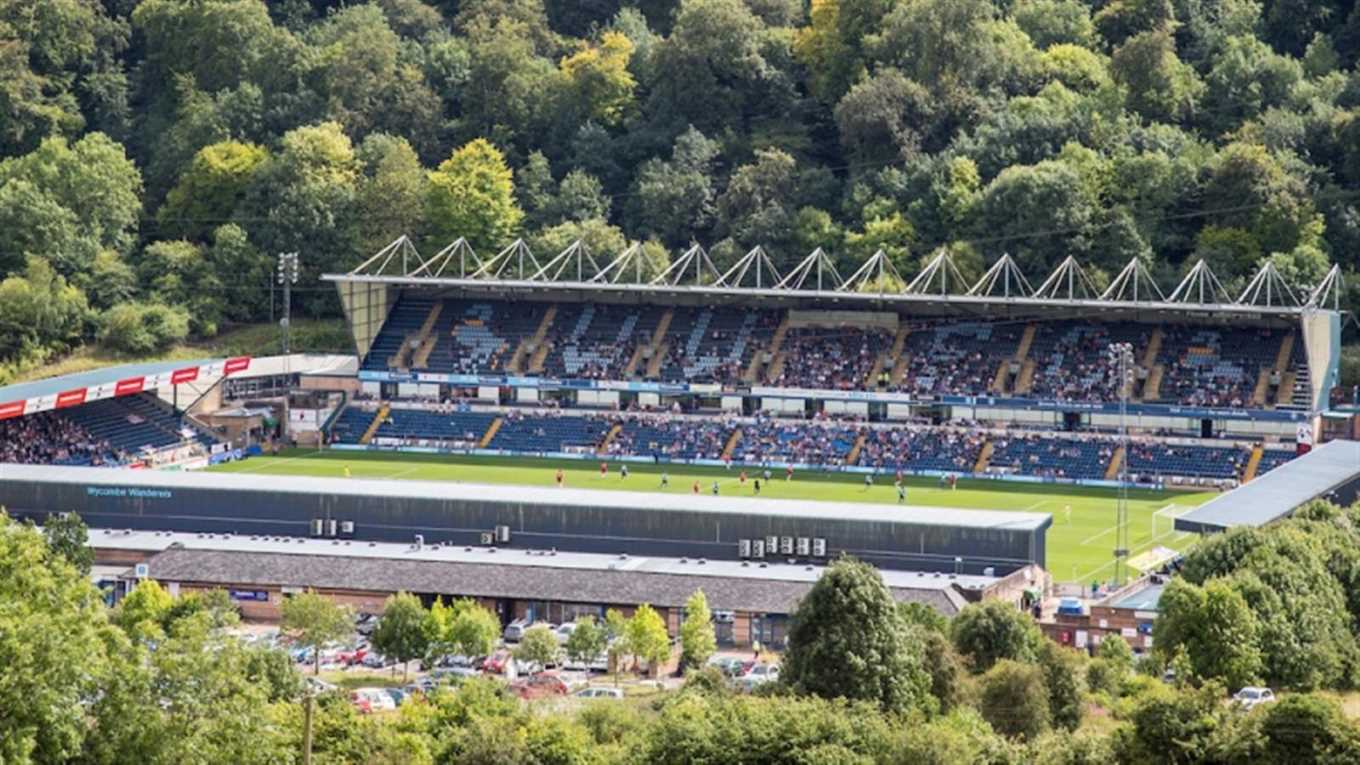 Named in honour of benefactor and former captain Frank Adams, Adams Park has been home to Wycombe Wanderers since its inception in 1990.

Away supporters will be housed in the Panache Stand on matchday, which is the east stand of the ground behind one of the goals. A total of 2,053 County supporters could be accommodated for the game in an all seater stand.

Since returning to the Football League, County have visited Adams Park on four occasions.

The first occasion was on Boxing Day 2013 when 423 Exiles fans made the trip to High Wycombe.

93 made the trip on a Tuesday night for John Sheridan’s first win as County manager in the 2-0 success on 20th October 2015.

220 County fans were there last season for the 2-1 defeat. 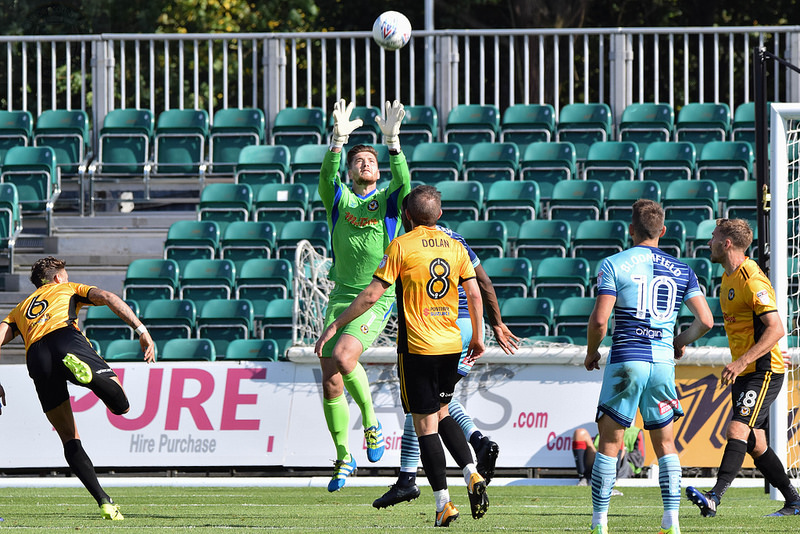 Two fine displays of goalkeeping ensured the Exiles and Wycombe Wanderers had to settle for a point apiece in a finely balanced encounter at Rodney Parade.

Exiles goalkeeper Joe Day and his opposite number Scott Brown were both in fine form during the game, pulling off a host of top saves to keep the game scoreless.

Day made two finger-tip saves to deny Luke O’Nien in the first-half, before stopping Wycombe strikers Craig Mackail-Smith and Josh Umerah in the second-half, who both had shots from just outside the six-yard area stopped at point-blank range.

County’s best opportunities fell the way of Frank Nouble and Padraig Amond in the second-half, but away goalkeeper Brown was also equal to the Exiles opportunities, meaning that both sides were involved in their first 0-0 draw of the season.

It is one of two 0-0 draws from a County perspective in all competitions this season, following the shutout with Lincoln on Saturday, while Wycombe have been involved in another three since the encounter at Rodney Parade – against Exeter City, Mansfield Town and Stevenage. 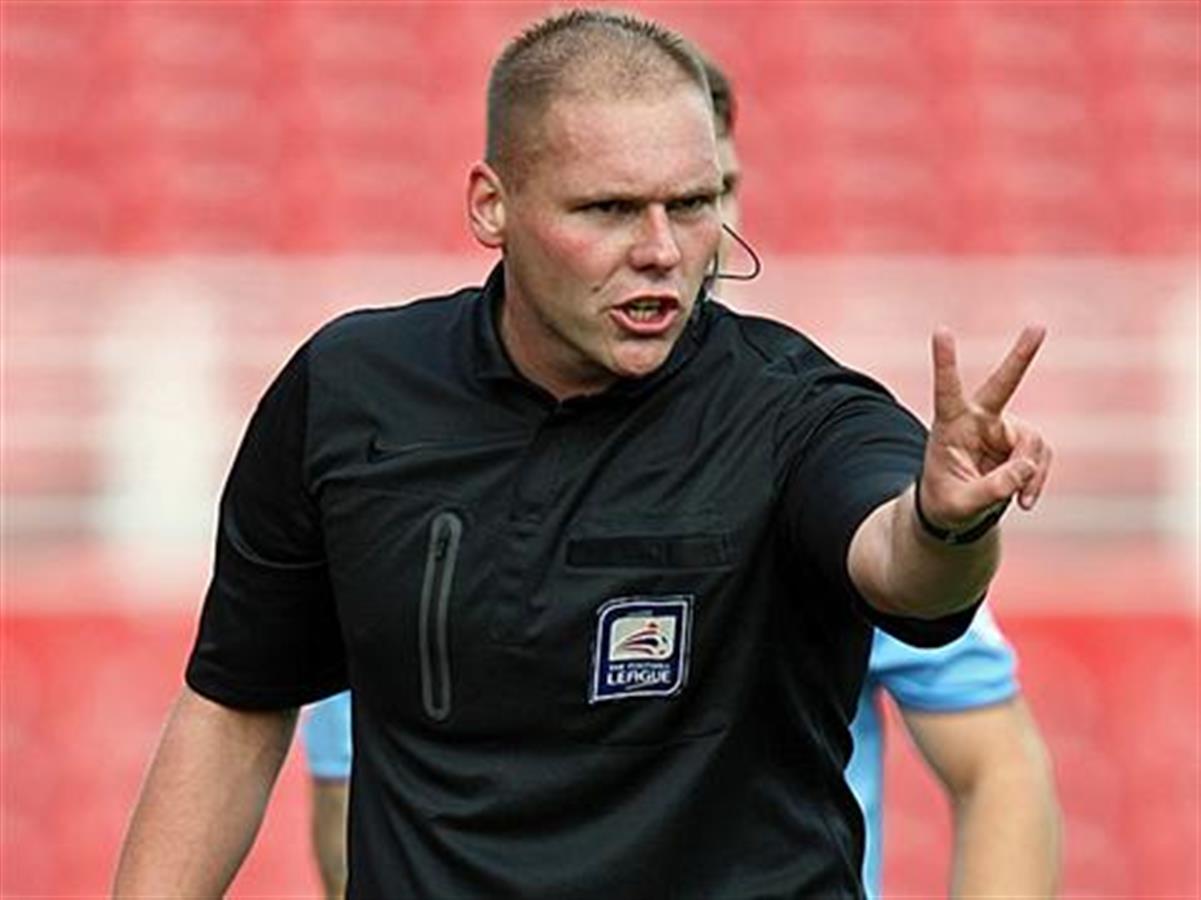 Breakspear is currently embarking on his 5th season as a Football League referee.

He has officiated 28 matches thus far this campaign, the last of which came on 16th December as Northampton secured a 2-1 home victory over Walsall in League 1.

That follows on from refereeing 40 games during the 2016/17 campaign, a season where Breakspear gave out 165 yellow cards and 10 red cards throughout the entirety of the campaign.

Breakspear has refereed County on 11 previous occasions - four times in the Conference, six times in League 2 and an FA Cup tie.

The Exiles have won two of those eleven games, with a further five draws and four defeats.

Breakspear has already refereed County this season, as Shawn McCoulsky's late goal salvaged a point in the 1-1 draw with Mansfield Town. Five bookings were given out on the day, one of which went to County, Dan Butler the offender.

And last season, County picked up just one point from the nine available in games officiated by Breakspear.

His first County game of that season came in the 2-1 defeat to Luton Town, Cameron McGeehan scoring a 97th minute penalty for the Hatters. Seven County players were booked on that day, while Johnny Mullins was dismissed for the home side.

A further three County players were booked in Breakspear’s second game that season as Portsmouth fought back to win 3-2 at Rodney Parade on Boxing Day.

Mark O’Brien was sent off against his former club in the 1-1 draw with Luton Town, with a further four County players receiving cautions.

In 2015/16, Breakspear only refereed County once, in the 2-1 defeat to Blackburn Rovers in the Emirates FA Cup third round. Joe Day was sent off in the final minute on that occasion.

The 2014/15 season also saw only one game presided over by Breakspear, as three County players were shown a yellow card in the 0-0 draw at Plymouth Argyle.

David Pipe was sent off alongside bookings for Tom Naylor and Lee Minshull in the 2-1 defeat to Dagenham & Redbridge in the first County Football League game refereed by Breakspear.

Before that, he had refereed us on four occasions in the Conference, and County were unbeaten from those games in the promotion season of 2012/13.

He refereed the 2-0 home victory over Mansfield Town as-well as the 1-0 victory against Braintree Town. Two draws bring up the list of games officiated by Breakspear, a 1-1 draw at Ebbsfleet and a 0-0 draw with Stockport.