Newport County AFC will be looking to bounce back from suffering back to back league defeats for the first time this season when they entertain Crawley Town. The Exiles will also want to conclude the highly successful year of 2018 in perfect fashion, whilst the away side will be hoping to start climbing back up the table after being in freefall in recent weeks. 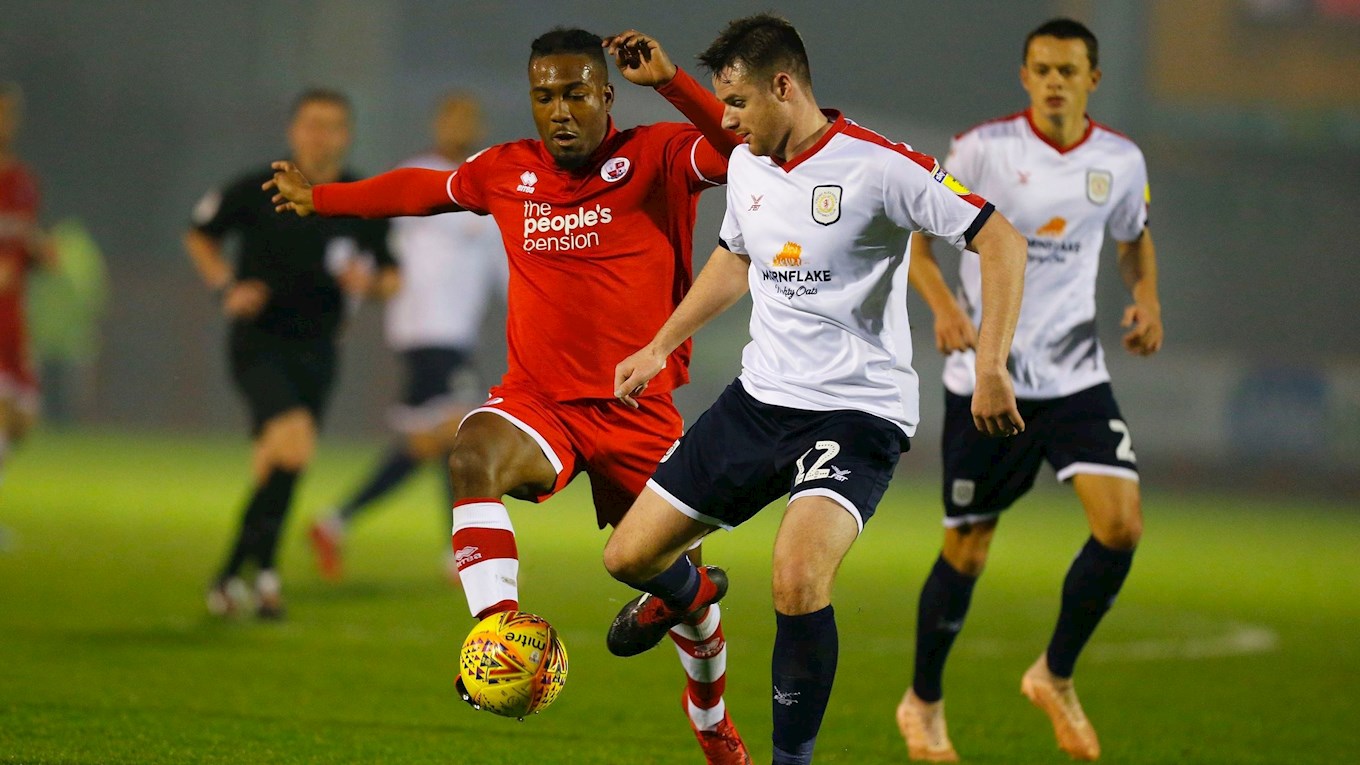 Crawley Town head to Rodney Parade on an atrocious run of form that has seen them plummet down the table and they are now precariously just six points off the League Two relegation zone.

Since quite comfortably beating County in West Sussex just over two months ago, the Red Devils have picked up just four points from the subsequent nine matches and have conceded in large quantities during that time.

Coincidentally, the solitary win since overcoming the Exiles does happen to start their run of three points from the last 15 available, where they actually comprehensively saw off Crewe Alexandra 3-0 at Broadfield Stadium. On 24th November, Josh Payne's first-half penalty was added to by late goals from Joe McNerney and Dannie Bulman.

But things have gone off the boil for Crawley recently and they have lost all four of their most recent League Two fixtures. That starts with a 1-0 reverse at home to Northampton Town, Kevin Van Veen’s second-half penalty enough to secure all three points in West Sussex.

They always say when things aren’t going your way that the most important thing is to pick up results from the teams around you, but they suffered a surprise 2-0 away defeat at strugglers Macclesfield Town. Elliott’s Durrell’s wonder strike was enough to win any game on its own, but the Silkmen also grabbed a late second through Harry Smith.

To start the festive fixtures, Crawley showed a lot of heart and desire but ultimately couldn’t take anything from the game as they went down to Carlisle United in a five-goal thriller at Broadfield Stadium. Forward Dominic Poleon struck twice for the Red Devils, but a second-half strike from Jack Sowerby gave the visitors victory after earlier goals from Jerry Yates and captain Danny Grainger.

On Boxing Day, Crawley were again left to taste defeat but this one in the cruellest of manners after Cambridge United netted with two minutes remaining to secure a 2-1 victory. Poleon opened the scoring on this occasion, George Maris equalised before half-time, then Jabo Ibehre struck late to give Colin Calderwood his inaugural success as Cambridge manager. 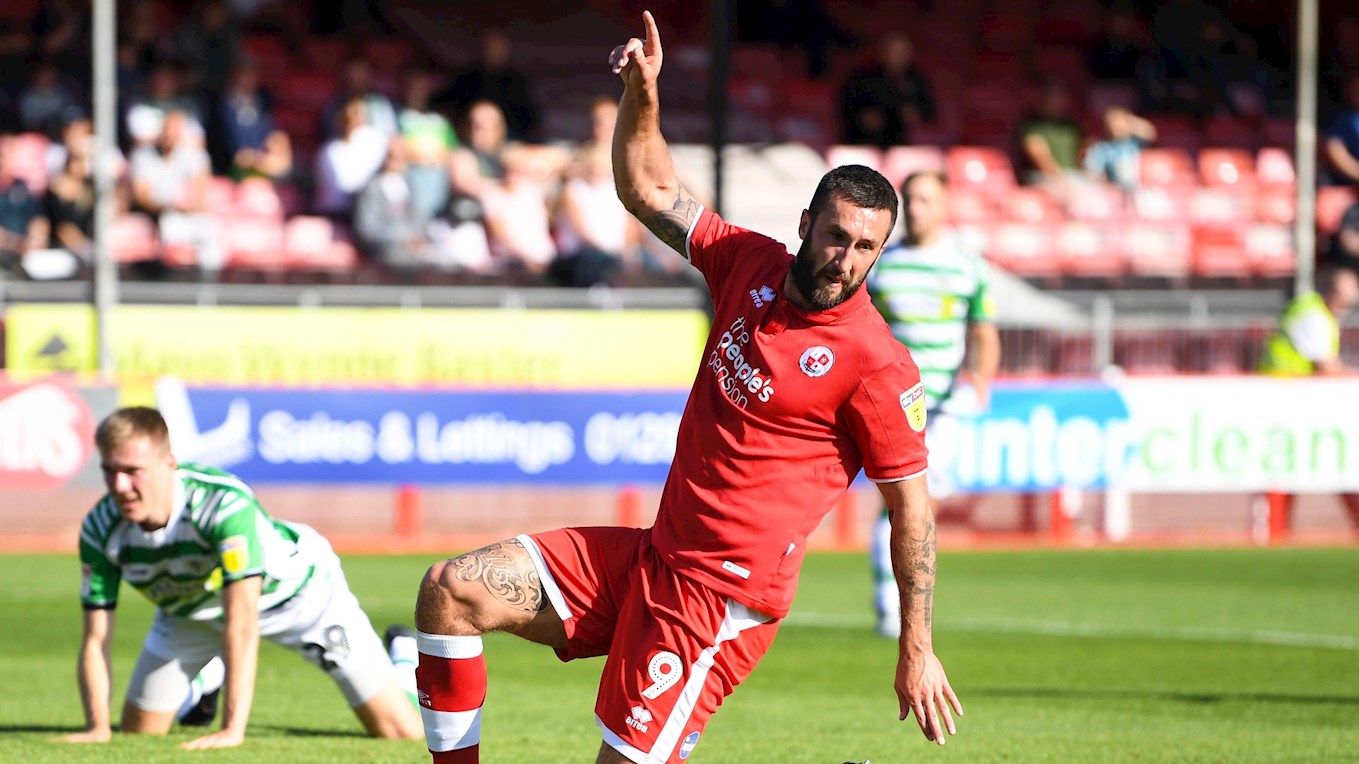 Crawley Town manager Gabriele Cioffi has a couple of problems to contend with ahead of bringing his squad to Rodney Parade on Saturday.

Striker Ollie Palmer misses out after his suspension for getting sent off against Northampton Town was extended following a charge of using foul and abusive language being confirmed by the FA.

In terms of injury concerns, Cioffi could be missing several members of his midfield for this fixture. Lewis Young (calf), Jimmy Smith (knee) and Filipe Morais are all expected to be unavailable.

Cioffi might then also decide to make some changes after another defeat on Wednesday against Cambridge United, with the games continuing to come thick and fast over the festive period maybe forcing some alterations.

One to Watch – Dominic Poleon

Difficult for any player to standout and shine when a team is struggling for form or to put results together in league and cup, but striker Dominic Poleon has at-least been on a run of good personal form.

Talisman Ollie Palmer has been missing for the last three games through suspension but the 25-year old has filled the void to beneficial effect and has three goals from his last two games – part of the five he has in total this campaign from 22 appearances.

He netted his first double of the season on 22nd December at Broadfield Stadium against Carlisle United, alongside further strikes away from home against Cambridge United, Notts County and Gillingham in the CheckaTrade Trophy.

A highly experienced 25-year old striker, Poleon certainly had a good footballing education as a youngster and spent his youth career at Chelsea, Southend United and Leeds United.

That ultimately saw him make his first professional appearance with the Elland Road outfit, coming on as a late substitute on 11th August 2012 during a League Cup tie with Shrewsbury Town.

Chances were limited in the first season for Poleon so he joined Bury FC and Sheffield United on loan, doing enough to make 19 Championship appearances with Leeds in the subsequent 2013/14 season.

He then signed for Oldham Athletic on transfer deadline day 2014 but couldn’t find consistent goalscoring form over two seasons, moving on to AFC Wimbledon and Bradford City before a move to Crawley Town over the summer. 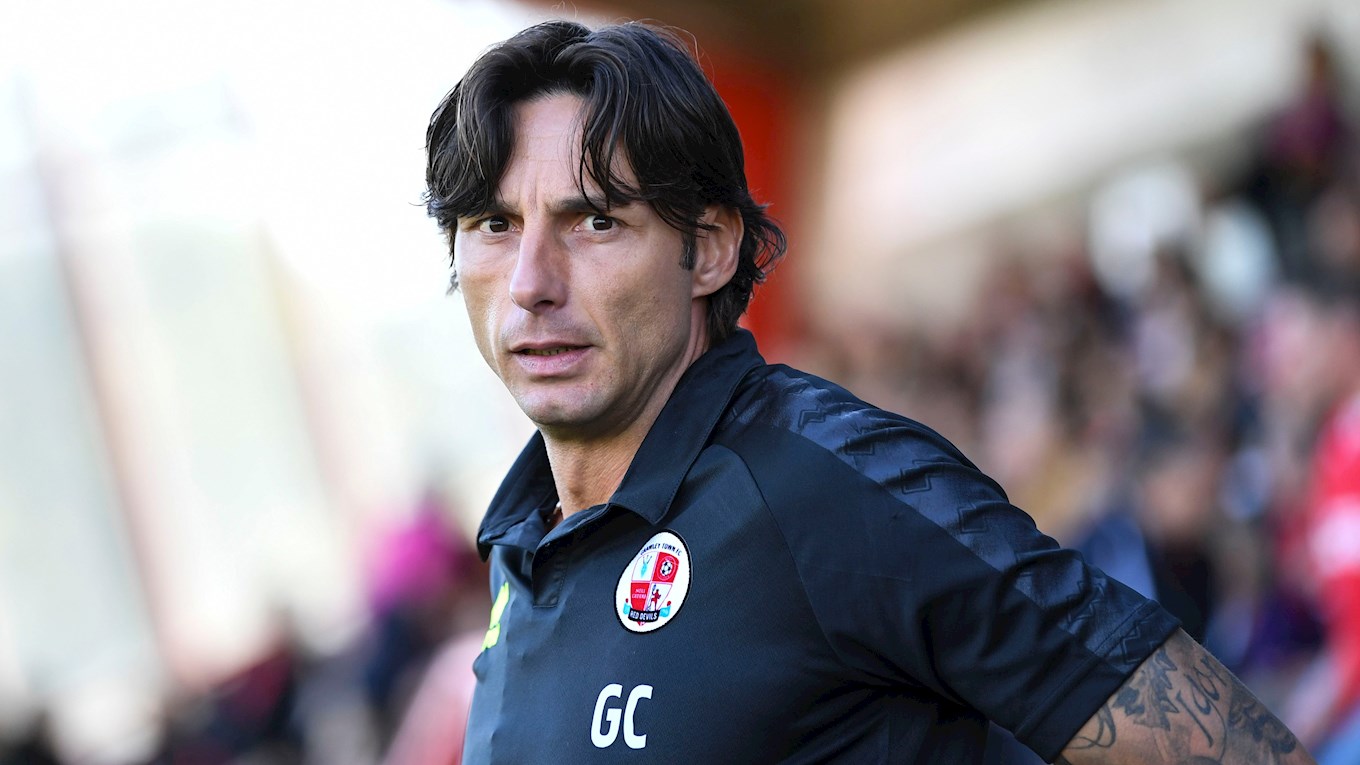 After a blistering start to life as Crawley Town manager, Gabriele Cioffi is now experiencing just how difficult life in the Football League can be as the Red Devils haven’t won in the league for over a month.

When looking at his record as a whole since taking to the hotseat on 7th September, it doesn’t look too bad as they’ve won five of his 16 league matches, including winning his inaugural fixture in English management with a solid home success over Morecambe.

But the stark reality is despite those five league wins, only one of them has come in the last nine matches and it will take all of Cioffi’s experience from his playing days to get Crawley Town back on the cusps of the play-off places like they were in late October.

This role is only Cioffi’s second managerial job and he will certainly be looking to rewrite the wrongs from his first position – where he was sacked by Lega Pro Seconda Divisione club Gavorrano after only securing one win from his first ten matches.

He’s held several coaching positions since retiring from the playing side of things in 2012, staying with Carpi as assistant coach for a full campaign.

The short stint at Gavorrano then comes, before Cioffi relocated himself to Australia and worked as youth coach for Eastern United FC. He went back to Italy for a short spell as youth coach at Südtirol but was quickly on a plane once again, this time to move to Al Jazira Club in the United Arab Emirates.

In December 2016, the Italian joined compatriot Gianfranco Zola as part of his backroom staff at Championship outfit Birmingham City but left in April 2017 – moving to Crawley in early September when replacing outgoing manager Harry Kewell. 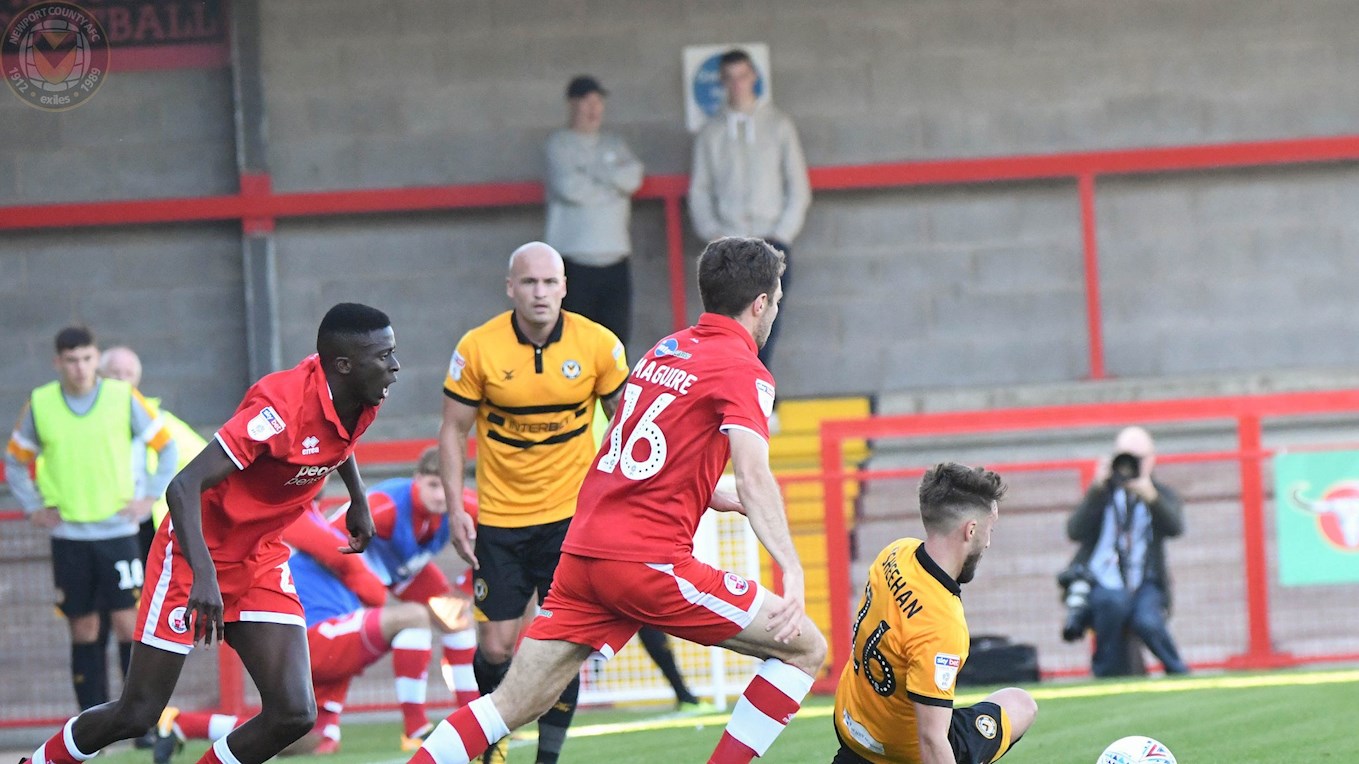 Newport County AFC suffered their first away League Two defeat since the opening day of the season as Crawley Town secured a 4-1 victory at Broadfield Stadium.

The home side started proceedings on the front foot and took the lead within the opening minute. Josh Payne did well to dictate the move from central-midfield, using his quick feet to get past his marker and spread the ball out-wide, right-back Lewis Young got to the ball and whipped an inviting delivery into the area for Joe Maguire to score his first professional goal.

A host of tremendous saves from Joe Day helped County get in at half-time just a goal behind, with the Exiles predictably rallying after the restart and finding an equaliser on 59 minutes. Pinball in the area was eventually halted by Antoine Semenyo’s desire to get in and dig the ball out, teeing up Jamille Matt who spun Mark Connolly inside out before rifling a shot past Glenn Morris.

Crawley hit back from there when insisting they would not rue the plethora of chances created before County’s equaliser and they secured the three points with a trio of quick-fire goals.

After Fraser Franks was adjudged to have pulled down Ollie Palmer in the area, home captain Filipe Morais sent Day the wrong way to restore the lead, before Palmer then got in on the act himself when meeting a George Francomb delivery at the far post.

Substitute Ashley Nathaniel-George completed the scoring with a fine solo run from his own half that resulted in a crisp 25-yard strike – Crawley inflicting County’s heaviest away defeat of the season in West Sussex.

Read what Mike Flynn made of the contest. 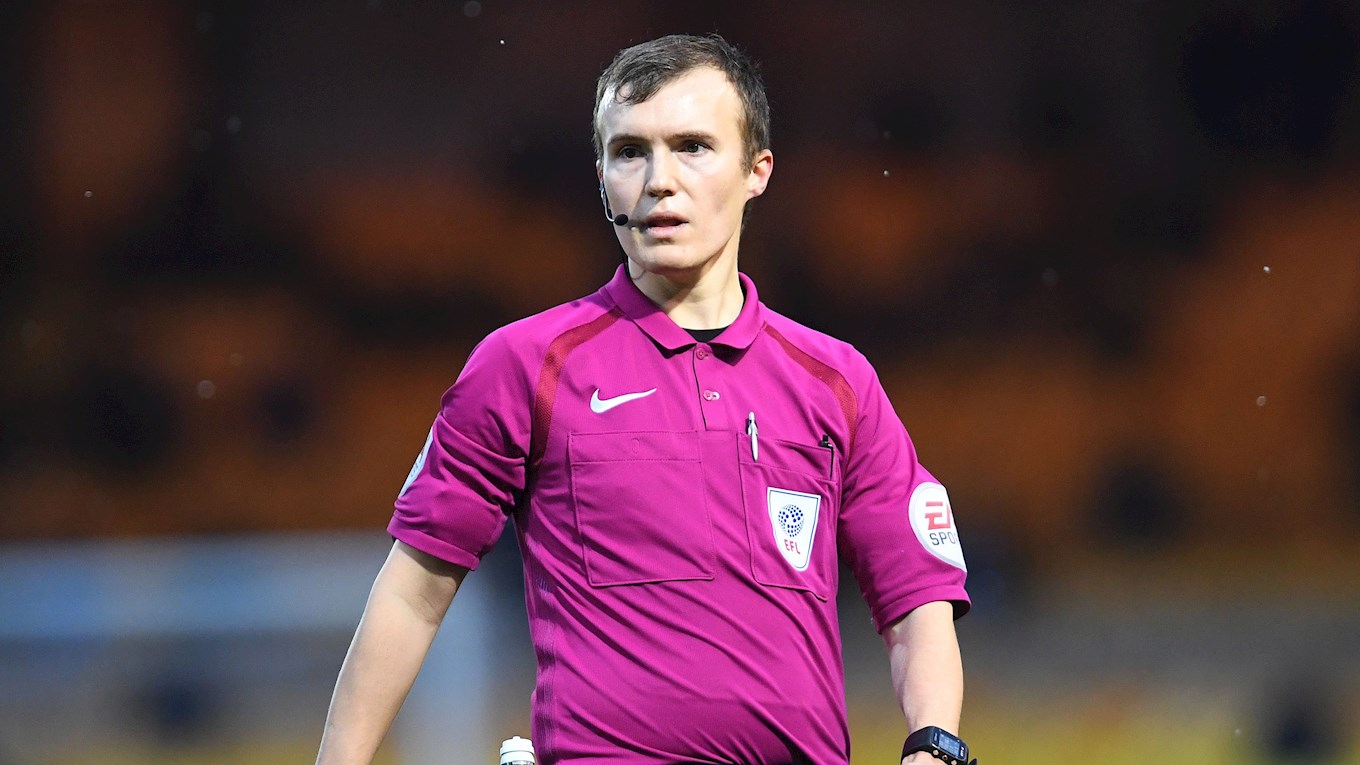 Coggins is currently embarking on just his second season as a Football League referee having officiated his first match in League Two on the opening day of last season when Morecambe started the campaign off in perfect fashion having secured a 2-1 victory over Cheltenham Town.

He has refereed 22 matches thus far this season, giving out 85 yellow cards and three red cards, including four yellows on the opening day of the season as Scunthorpe United won away at Coventry City.

Not a single game has passed this season without Coggins going to his pocket, and his highest number of cards comes on 20th October when he brandished eight yellows and a red during the draw between Swindon Town and Mansfield Town.

Those statistics follow on from refereeing a total of 34 matches across all competitions in his debut Football League campaign of 2017/18, a season in which Coggins gave out 87 yellow cards and six red cards throughout the entirety of the campaign. 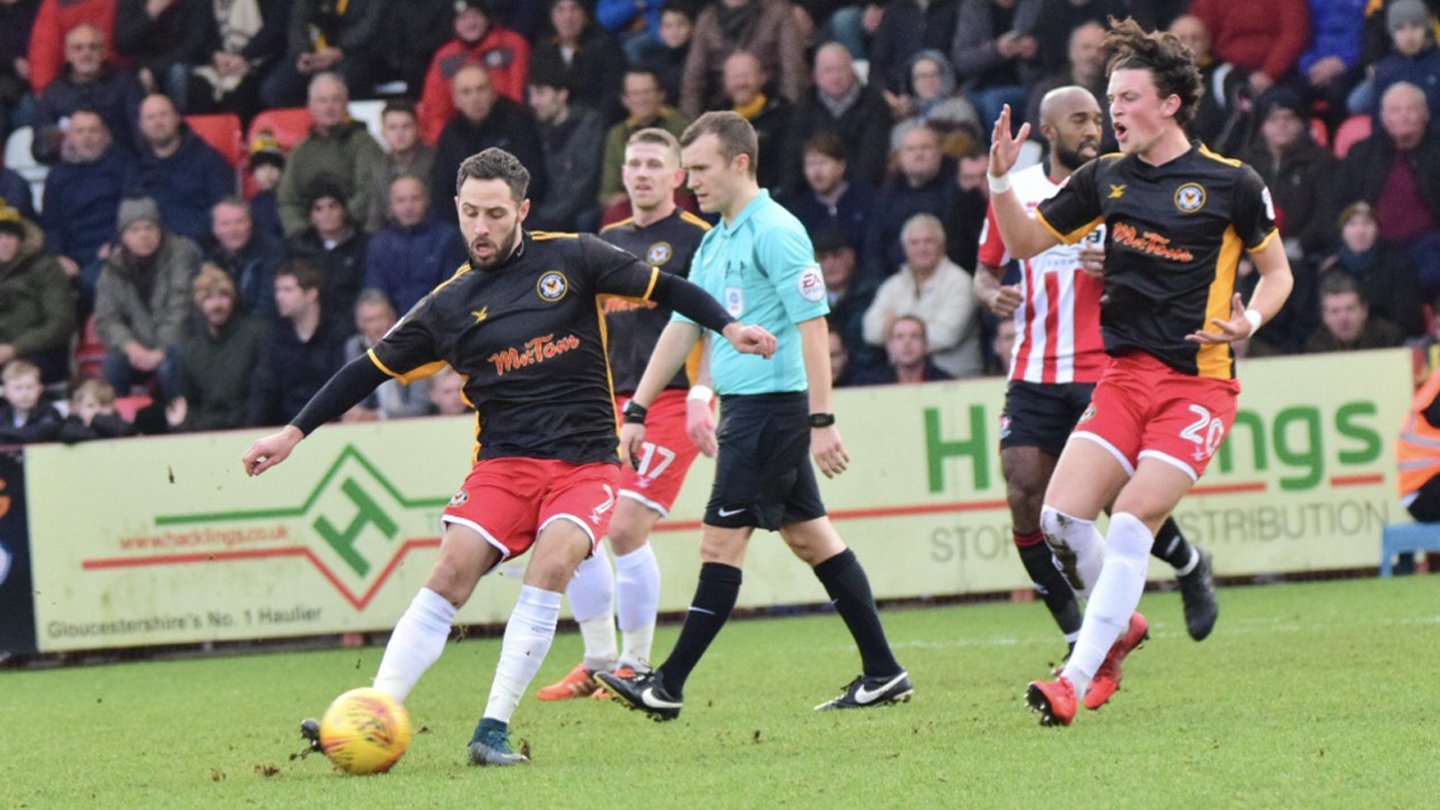 Coggins has officiated a match involving Newport County AFC on four previous occasions in League Two and the CheckaTrade Trophy. The Exiles have a pretty good record from those previous matches – having won two of the contests, drawn once and only lost on one occasion.

He has already refereed the Exiles once this season and it came on 11th September as Swindon Town secured a 1-0 victory in the CheckaTrade Trophy. Mark O’Brien was the only County player booked.

The other three matches came last season, starting with the 2-0 victory at Southend United in the Carabao Cup First Round on 8th August 2017. Shawn McCoulsky scored twice on his first start for the Exiles, while Matty Dolan and Ben White were both cautioned.

Coggins also officiated the 1-0 victory over Grimsby Town on 23rd September 2017 as Padraig Amond scored the match-winner for the second successive game at Rodney Parade. No yellow cards were distributed to County players, although Nathan Clarke was booked for the visitors.

Coincidentally, Coggins was the man in the middle for the final game of 2017 during the 1-1 draw at Cheltenham Town. Mo Eisa cancelled out Padraig Amond’s emphatic header at the LCI Rail Stadium, with Frank Nouble the only County player cautioned amongst four bookings in total.