Newport County AFC will be looking to bounce back to winning ways on Tuesday night when they host Welsh rivals Wrexham AFC. Both clubs know a victory would set-up a tie with Leicester City in the next round, a game which would also be live on BBC One, and the visitors head to Rodney Parade with an impressive victory from the weekend.

Here, you can find out all the facts and statistics ahead of this Emirates FA Cup Second Round Replay…

What’s happened since the initial tie 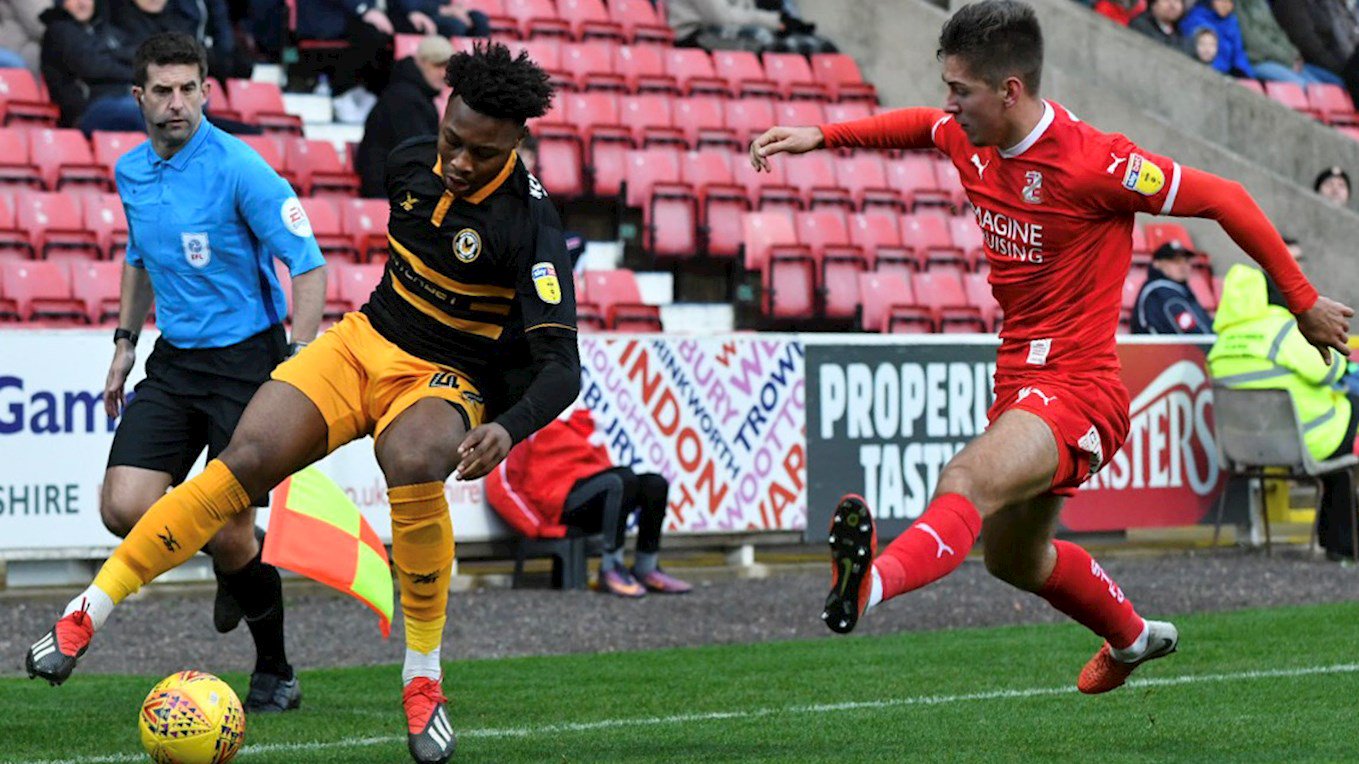 County have been out on the road twice since the initial tie at the Racecourse. The Exiles were knocked out of the CheckaTrade Trophy on penalties by Cheltenham Town, before suffering a narrow defeat amidst tricky conditions against Swindon Town.

Read the full match report from the Jonny-Rocks Stadium.

Read the full match report from the County Ground.

Wrexham AFC, meanwhile, have only played once since the initial tie and that was the 2-0 victory at home to Eastleigh on Saturday.

Striker Bobby Grant got his first Dragons goal when completing the victory after the break, defender James Jennings opening the scoring inside two minutes – and with results going their way, Wrexham AFC moved four points off top spot with a game in hand.

Interim manager Graham Barrow said: “I was more pleased with the second-half performance. It’s easy to expect the sort of performance we got in front of the TV cameras [last week against County] but we worked well this week and the players showed a good appetite today.

“We have spoken about getting back to winning ways and I thought we were worthy winners.”

Wrexham AFC still have a long way to go if they are to match their best ever run in the Emirates FA Cup as they have reached the Quarter Finals on three separate occasions.

The first time they got that far in the competition came way back on 9th March 1974 when they fell to First Division side Burnley 1-0 at Turf Moor. The Welsh side actually dominated the majority of the contest, but ultimately lost to a deflected shot late on.

In their next attempt at getting through the last eight, Wrexham AFC this time suffered a 3-2 home defeat to Arsenal in-front of a sell-out 25,000 at the Racecourse on 11th March 1978.

Malcolm Macdonald opened the scoring for the Gunners in the first-half, but they were soon pegged back after a rare Pat Jennings error allowed Dixie McNeil to equalise. Arsenal ramped things up in the second-half and goals from Alan Sunderland and Willie Young were enough to see them through. Graham Whittle got a late consolation for Wrexham AFC.

Their most recent failing at the Quarter Final stage came just over 20 years ago as they fell to a 1-0 defeat against Chesterfield at Saltergate on 9th March 1997.

Former Premier League referee Mike Riley was in charge on the day as Chris Beaumont scored just before the hour mark to send the Spireites through in a rare ‘all third-tier’ Quarter Final tie.

One to Watch – Paul Rutherford 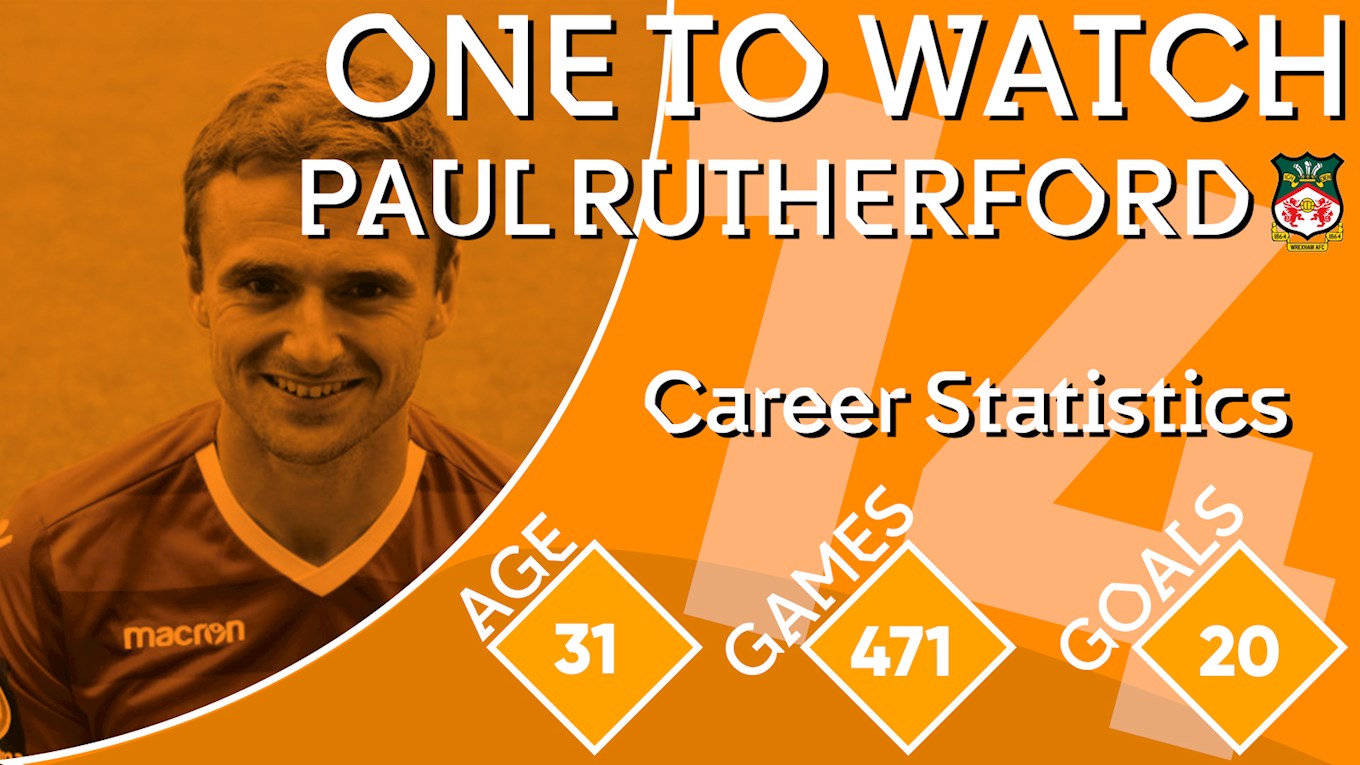 Arguably Wrexham AFC’s greatest threat in the initial tie 10 days ago, Paul Rutherford has spent the majority of his career forging himself as Mr. Consistent in the National League.

Against County at the Racecourse, Rutherford looked the only player capable of carving out goal scoring opportunities in the first-half and it was his twisting run that resulted in Joe Day making a stunning stop to deny Bobby Grant.

Rutherford again teed up Grant in the penalty run after another menacing run forward and although most of the Racecourse thought the forward had scored, he had actually hit the side netting.

After his substitution with 15 minutes left to play, Wrexham AFC looked evidently less menacing and the Coutny defence will have to be on their game to make sure the 31-year old doesn’t dictate the play like he did 10 days ago.

This current spell is just the fourth club that Rutherford has appeared for in his professional career having come through the youth ranks at Liverpool before moving to Chester City.

He made his first team debut for Chester in 2005 when facing Cambridge United in the Football League Trophy, going on to make 57 League Two appearances and scoring once.

Rutherford was more potent in-front of goal when he moved to Barrow AFC in the summer of 2009, winning the FA Trophy in his first season before a season high tally of seven goals in his second campaign.

From there, he spent three seasons with Southport between the summers of 2013-2016, moving to Wrexham AFC on 23rd May 2016 and being virtually a mainstay within the team ever since. 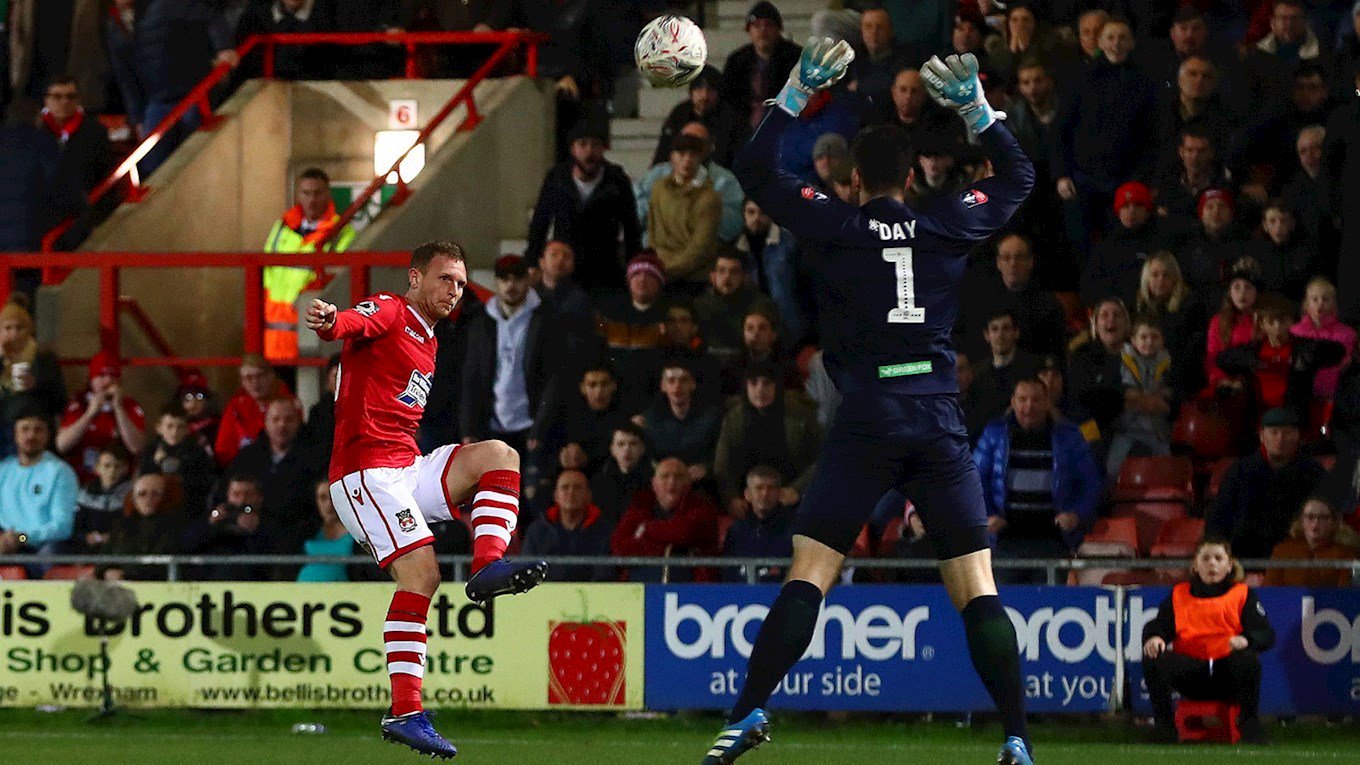 Tomorrow night’s Emirates FA Cup Second Round Replay against Wrexham AFC comes after the two sides couldn’t be separated 10 days ago in-front of the BT cameras at the Racecourse.

The hosts controlled most of the play in the first-half and their best chance came on 36 minutes when not for the first time this season, County had to rely on Joe Day’s heroics to keep them level.

Paul Rutherford – the main threat of the night for the home side – squirmed his way through David Pipe and Fraser Franks into the area, playing a one-two with Stuart Beavon, before teeing up Grant who smashed at goal, but Day somehow got a strong hand to it.

The home side continued to control proceedings at the start of the second-half and almost broke the deadlock on 53 minutes.

A long punt downfield by goalkeeper Rob Lainton caught out the County defence with a looping bounce, Beavon shrugged off Franks to advance on goal and chipped Day, but Mickey Demetriou had read the situation to hook the ball off the goal line.

County improved from there but couldn’t capitalise on the chances created, Antoine Semenyo forcing a save from Lainton before he and Tyreeq Bakinson both wasted free headers.

Day once again had to come to County’s rescue to ensure they remained in the Emirates FA Cup when pulling off a tremendous double save with 17 minutes remaining.

Walker was found at the far post from a corner-kick, he produced a smart save from Day, before the Exiles shot stopper had to react quickly after the ball bounced back off Jamille Matt and he had to scoop it off the goal line.

Read the full match report from The Racecourse. 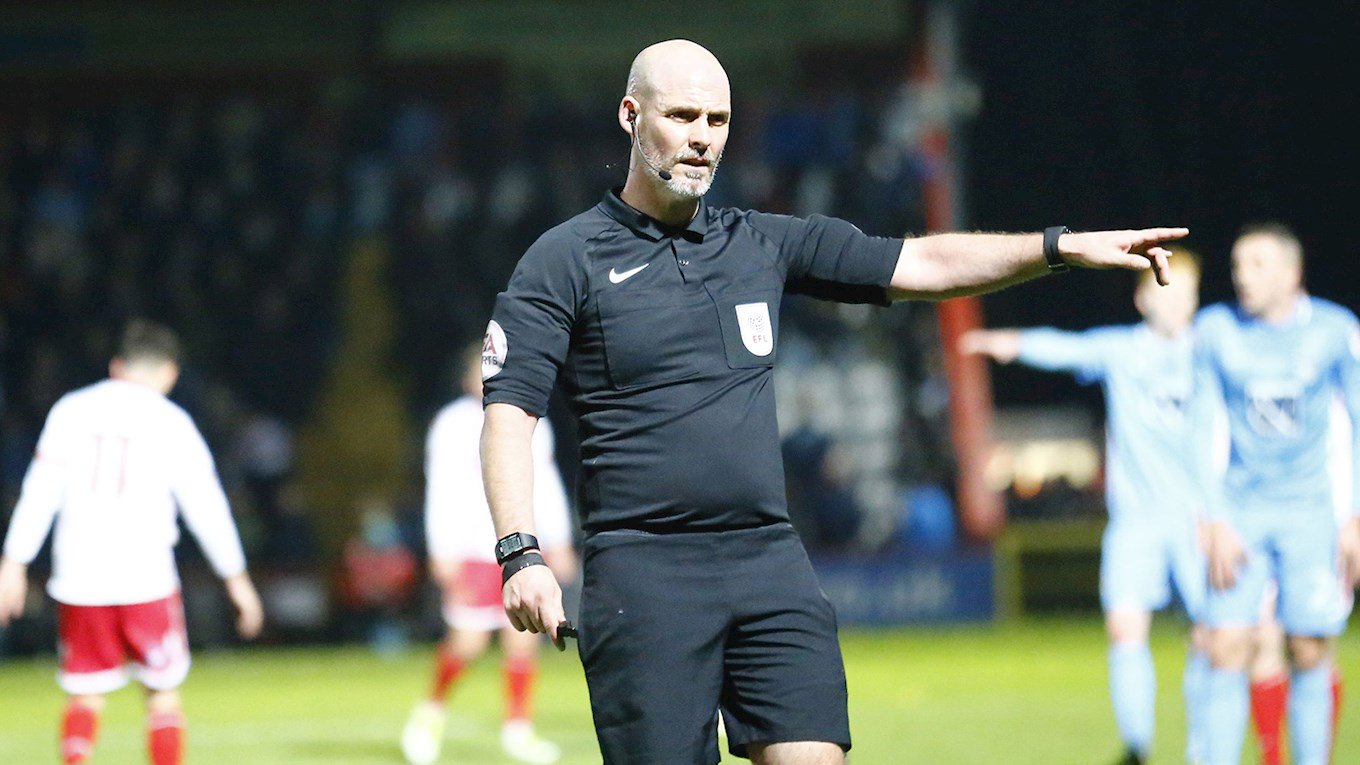 He has refereed 22 games already this season, giving out 62 yellow cards and two red cards, including three yellows on the opening day of the season as Bradford City won away at Shrewsbury Town.

Four games have passed this season without Johnson going to his pocket, three of which came in the CheckaTrade Trophy alongside one fixtin League One on 3rd November when Burton Albion won away at Walsall.

His league high total of yellow cards for a single fixture is seven, a figure he has given out twice this campaign – Lincoln City’s away victory at Exeter City on 1st September and Bury FC’s away triumph over Swindon Town on 15th September.

The two players dismissed by Johnson were Bromley’s Frankie Raymond during their Emirates FA Cup defeat at home to Peterborough United and John Joe O’Toole of Northampton Town in their CheckaTrade Trophy success at Oxford United. 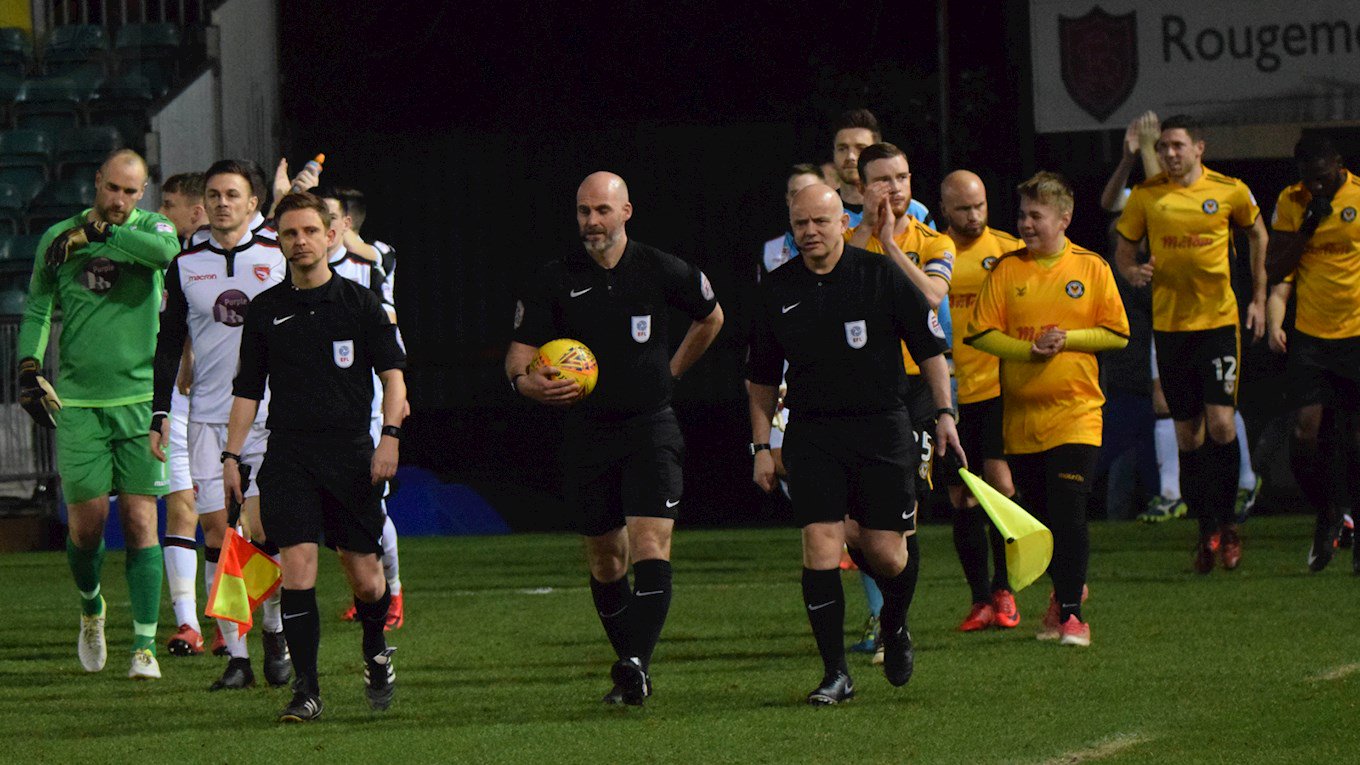 Kevin Johnson has officiated a match involving Newport County AFC on 12 previous occasions across the Conference, League Two, the Emirates FA Cup and the CheckaTrade Trophy. The Exiles have relative success in those previous matches – winning six, drawing four and losing just two.

He has already presided over a County game this season, that coming on 25th September as the Exiles secured an impressive 3-0 home success over Chelsea U21s in the CheckaTrade Trophy. No bookings.