Newport County AFC will be looking to preserve their perfect start to 2018 when Morecambe head to Rodney Parade on Tuesday night. The Exiles have never beaten the Shrimpers in South Wales in a League 2 fixture, amassing just one point from twelve, while Morecambe will be looking for their seventh win against County in just the tenth meeting between the clubs. 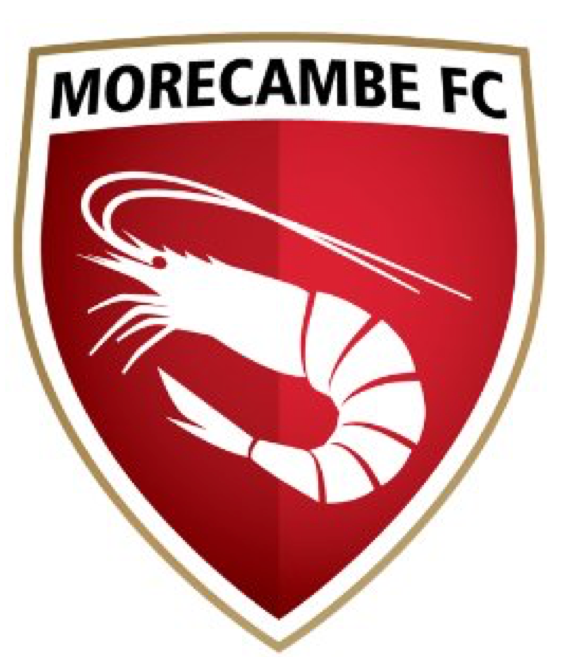 The Shrimpers head to Rodney Parade on a rotten run of just two victories from their last 16 away games.

Looking at this season in particular, the away side have only won twice on the road all campaign, having played away on 14 occasions, and only Chesterfield with just the one away win have won fewer.

But in their last six games both home and away, Morecambe have been on a relatively steady run of form, having picked up seven points from the last 18 available, following two wins, one draw and three defeats.

That run starts with a defeat as Danny Rose struck two minutes from time to give Mansfield Town a 2-1 home victory. Shrimpers striker Callum Lang had got the away side back on level terms following Kane Hemmings’ early opener, only for Rose to strike just before the end to give the Stags all three points.

They then conceded four in a convincing 4-1 away victory for Notts County at the Globe Arena.

Lang scored again with a minute to go, but the Magpies had already cruised to victory thanks to a double from both Jorge Grant and Lewis Alessandra.

But the Shrimpers certainly bounced back from those two defeats, winning a seven-goal thriller at home to Yeovil Town.

Only two of those goals were scored prior to the 72nd minute, as Jake Gray scored after 25 seconds and Otis Khan tapped in after 17 minutes to put Yeovil in command.

Vadaine Oliver and Lang got Morecambe back on level terms, before Omar Sowunmi restored the Glovers lead with six minutes remaining.

But Morecambe weren’t done there and instantly responded through Lang, before Kevin Ellison scored right at the death with a powerful header to give them a much-needed victory.

They secured back-to-back wins in League 2 for the first time this season in their next match, with an away victory at Grimsby Town.

Ellison and Steven Old both scored in the 2-0 victory at Blundell Park, before Ellison scored again in the 1-1 draw with Stevenage.

In their last match on Saturday, the Shrimpers slipped to a 1-0 defeat at Luton Town thanks to a Johnny Mullins second-half attempt.

That leaves Morecambe in 19th position ahead of their trip to Rodney Parade, just three points clear of Forest Green Rovers in the final relegation place. 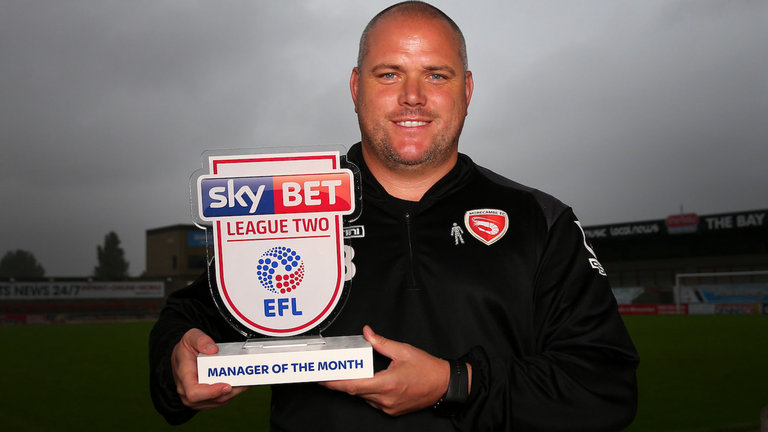 Forward Callum Lang will face a late fitness test having missed the defeat to Luton Town last weekend through an ankle injury.

The 19-year old loanee from Wigan Athletic will be a big miss for the Shrimpers if deemed unfit to play any part, following scoring five goals from his last seven appearances.

It is also unknown as to whether fellow attacker Vadaine Oliver will play any part at Rodney Parade. The 26-year old also sat out the trip to Kenilworth Road as his partner is due to give birth, with it unclear if he will be available for selection on Tuesday.

Those are the only two doubts that Morecambe manager Jim Bentley has ahead of the trip to South Wales, although he may decide to rotate his squad again having made four changes for that defeat to Luton on Saturday.

One to Watch – Steve Old 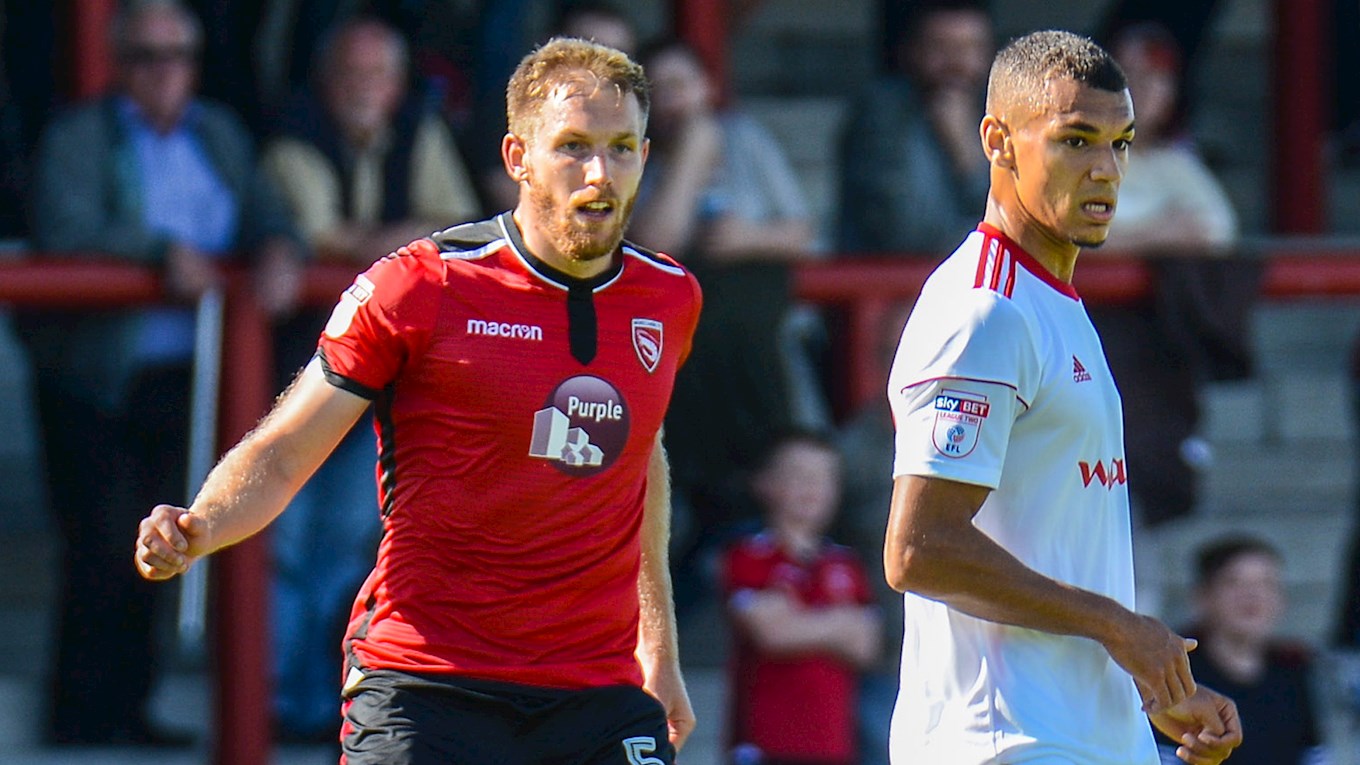 The 6’3” centre-half has provided some much-needed height and power to the Morecambe defence since signing for the club in the summer.

He has been involved in eight clean-sheets already this campaign for the Shrimpers, while also chipping in with four goals.

The most important of those goals came in the 1-1 draw with Carlisle, while also finding the net with a header in the victory at Grimsby Town, defeat to Stevenage and victory over Wycombe Wanderers.

Old has made 30 appearances to date with the Shrimpers, who happen to be the first professional club of his career in England.

The 31-year old started off in his native New Zealand at Manuatu United youth setup.

A brief stint at Newcastle Jets soon followed, before moving on to Wellington Phoenix in 2007, the only team in the A-League based outside of Australia.

He was released at the end of that season and just over a year later, signed for Kilmarnock after a successful loan trial and obtaining a work permit.

His three-year contract came to a premature end after just two years with the club, alongside a loan spell at Cowdenbeath, before joining lower league English sides Sutton United and Basingstoke Town.

Interestingly, his next career move was to China, signing for Shijiazhuang Yongchang Junhao no less, before adding Sweden to his list of destinations with GAIS.

All this eventually sees him move to Morecambe this summer, as the well-travelled centre-back looks to have accustomed to life with the Shrimpers.

Old has also been capped at all age grades by New Zealand. He has made 17 appearances for the senior side, scoring once in a 1-0 win over Malaysia, while also representing his nation at the 2008 Olympic Games and 2009 Confederations Cup. 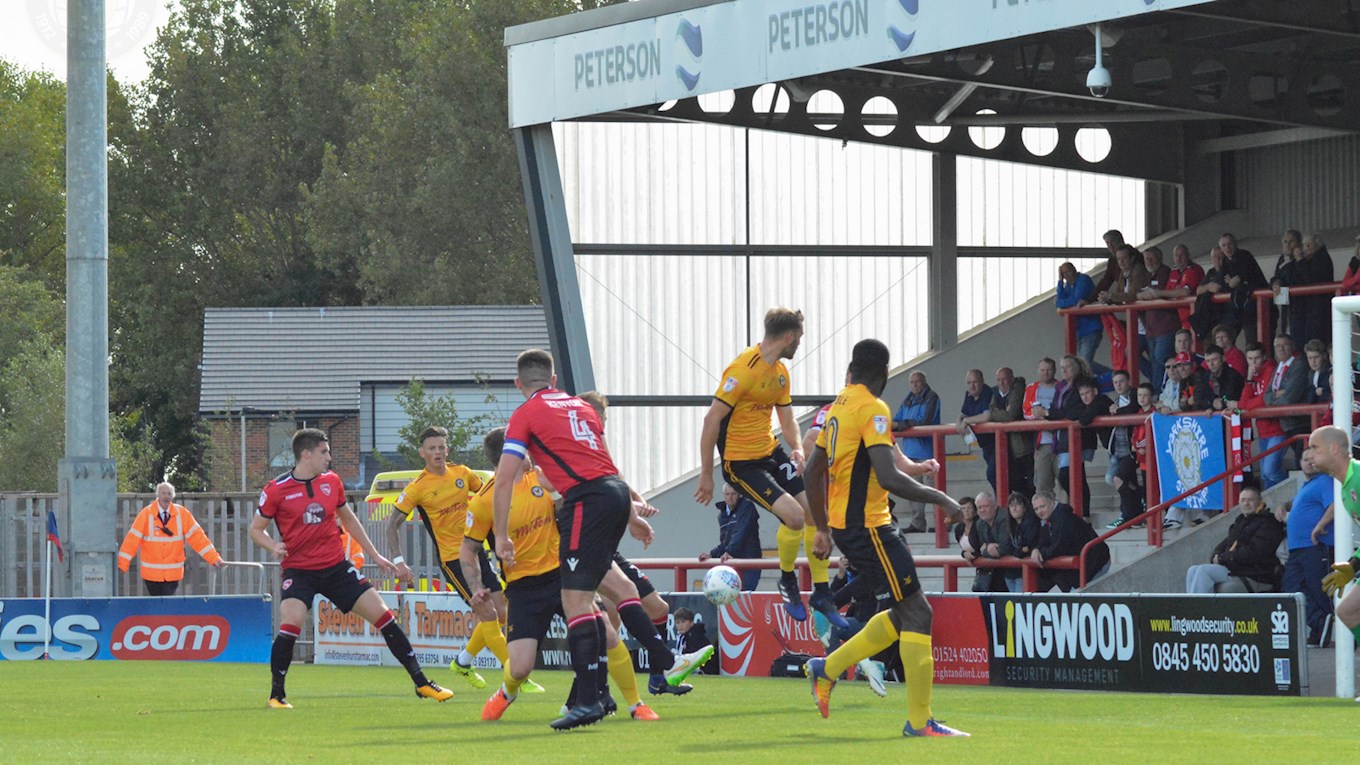 A double from Kevin Ellison ensured Newport County AFC suffered their second league defeat of the season following a 2-1 defeat at the Globe Arena.

The game had made a relatively low-key start until the opener on 35 minutes, but Ellison, so often the bane to the County side, ensured he would net that goal ten minutes before the break.

It was somewhat harsh on Joe Day to concede, who had reacted well to deny an Elliott Osborne attempt at his far post, only for Ellison to steal in and tap home.

But the Exiles weren’t to be behind for too long, however, as they grabbed an equaliser within 90 seconds.

It was the result of a really clever quick-corner routine, as Mickey Demetriou rifled Matty Dolan’s pass across the box for Scot Bennett to get a reactive flick to it and send it into the bottom corner.

Padraig Amond and Frank Nouble both came close as the Exiles started the second-half the better of the two sides, while Aaron Wildig fired wide at the other end.

Day was then forced into another trademark save to deny Adam McGurk, somehow clawing the ball away from goal following a powerful header from the edge-of-the-area.

And just as County looked to be finishing the stronger, they received a sucker punch as Ellison scored for the fifth time against the Exiles in his career with ten minutes remaining.

It didn’t appear like he knew too much about it but the 38-year old deflected a shot from substitute Adam Campbell straight into the top corner from 25 yards.

The Shrimpers held out from there as County searched valiantly for an equaliser, condemning the Exiles to a first defeat in Lancashire from three attempts, while securing just their second win of the campaign as a result.

Mike Flynn said: “They were better than us all over the park and it’s as simple as that really.There was a lot of things wrong today but listen, it’s things to work on for sure. It’s down to them to put it right in training this week and hopefully win their shirts back.”

Morecambe manager Jim Bentley added: “It’s a massive win for us because we really have needed it. The winning goal, that’s the bit of luck you need. On another day it could have gone over the crossbar, but it goes in the top corner and I’m really pleased with that.” 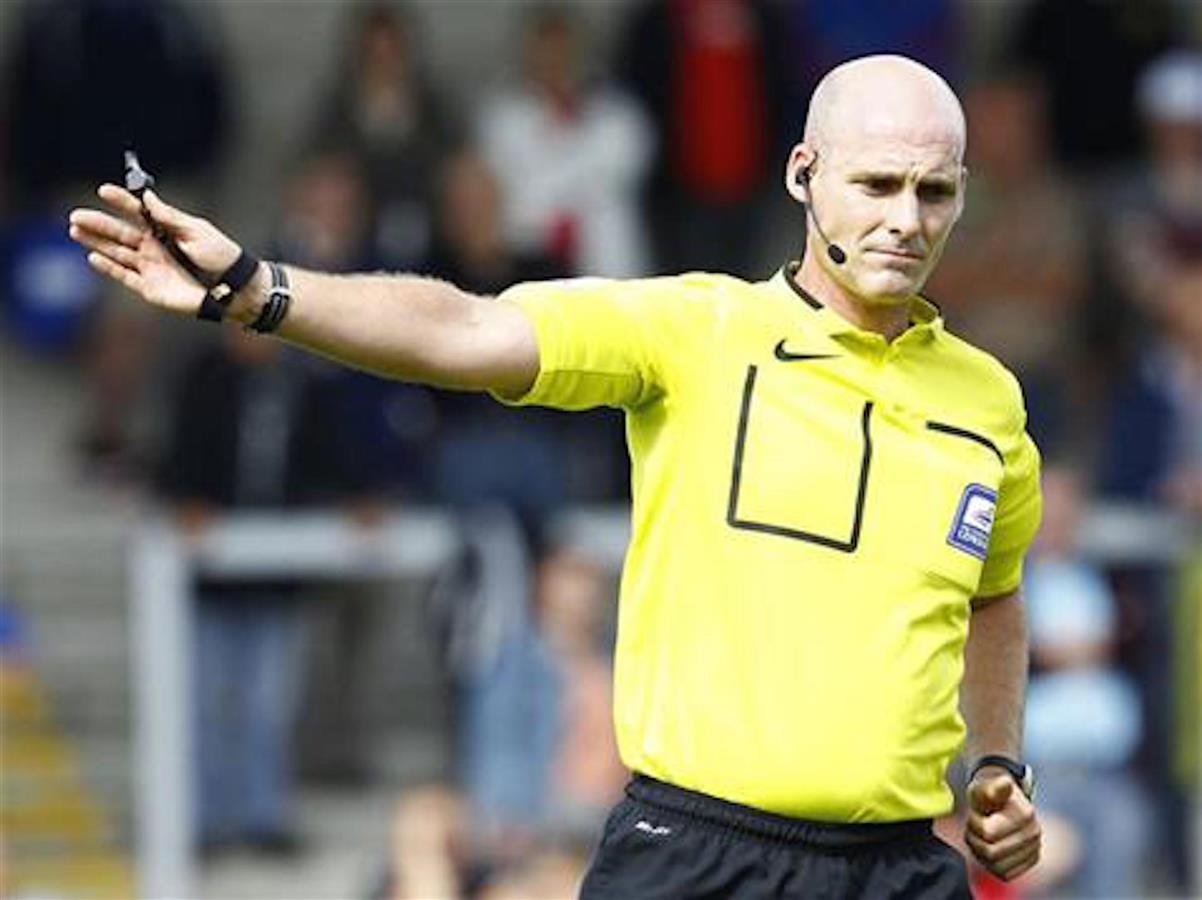 Johnson is currently embarking on just his fourth season as a Football League referee having officiated in the National League for many years prior to his promotion.

Remarkably, he has given out nine red cards already this season, including three in the game between Crawley and Carlisle – whilst another two came in the Cheltenham vs Maidstone match in the First Round of the Emirates FA Cup.

One of those dismissals also comes in the most recent of the 27 matches that Johnson has officiated this campaign, as Kristian Dennis struck in stoppage-time to gift Chesterfield a 2-1 victory at Yeovil Town.

Four yellow cards were also brandished during the fixture at Huish Park, taking his season total to 84 yellow cards and nine red cards from the 27 matches.

That follows on from his record in the 2016/17 season which reads as 100 yellow cards and four red cards from 30 matches.

Johnson has refereed County on 10 previous occasions in the Conference, League 2 and the Emirates FA Cup. And the Exiles have had relative success in those games – after winning five, drawing three and losing the other two.

In addition to being fourth official for the heroic 2-1 victory over Leeds United earlier this month, Johnson has actually refereed County this campaign.

That also came in the Emirates FA Cup as a double from Joss Labadie saw the Exiles secure a 2-0 victory over Cambridge United in the Second Round of the competition. Frank Nouble was the only player booked from a County perspective that Sunday afternoon.

The first came as goals from Tom Pett and an own-goal from Darren Jones saw Stevenage secure a 2-0 victory at Rodney Parade. Three yellow cards were given to the visitors, while Scot Bennett was also cautioned for the Exiles.

Ryan Bird, Aaron Williams and Dan Butler all scored in the other game refereed by Johnson in 2016/17, with Padraig Amond netting a late consolation as Hartlepool United were defeated 3-1 in South Wales. No bookings were given to either side.

That starts with the 1-1 draw against Burton Albion. Andy Sandell was booked against the Brewers, while Mark Byrne was given a yellow during the 2-2 draw with Hartlepool.

In the promotion season of 2012/13, Johnson officiated County three times. AFC Telford received two red cards in the first game of that season, as County secured a 4-2 away victory thanks to goals from Aaron O’Connor, Andy Sandell, Ismail Yakubu and an own goal.

The other two games came at Rodney Parade, starting with the 2-2 draw with Tamworth. Six yellows cards were brandished in that match although none were given in the 2-0 victory over Alfreton.

The 2011/12 campaign saw a further game presided over by Johnson. County saw two red cards that day, as Ismail Yakubu and Gary Warren were both given their marching orders during the 3-1 defeat to Kidderminster Harriers.

That just leaves the first ever game to be refereed by Johnson, which came way back in the 2010/11 season. County beat Mansfield 1-0 on that occasion, despite having Paul Bignot dismissed.

Other League 2 fixtures on Saturday (All 3pm kick-offs)