Today is International Women’s Day when the world celebrates the social, economic, cultural and political achievement of women throughout history. At Newport County AFC, we’re marking the day by celebrating the amazing women who help keep the Football Club running day in day out, whether it be as a volunteer, supporter, member of staff, or part of the County in the Community Team.

How many women work and volunteer at County?  The number might just surprise you!

We talk to just some of the women who are involved in the Club and asked how they got involved with the Newport County AFC and what their roles are.

Meet the Women at County...

“I’ve been the Club's Press Office for just over a year which means I’ve had the honour of covering the the miraculous Great Escape and the superb FA Cup run.  It’s a been a whirlwind 16 months but with a young, ambitious manager and CEO, it’s an exciting time to be part of Newport County AFC.

International Women’s Day is about celebrating women in all walks of life and this Football Club couldn’t survive without the incredible women who volunteer at and support the Club.  Today, we're highlighting the fantastic work these women do (often voluntarily) and hopefully showing other women and girls that there are lots of opportunities to work in football.  Nothing should hold you back!” 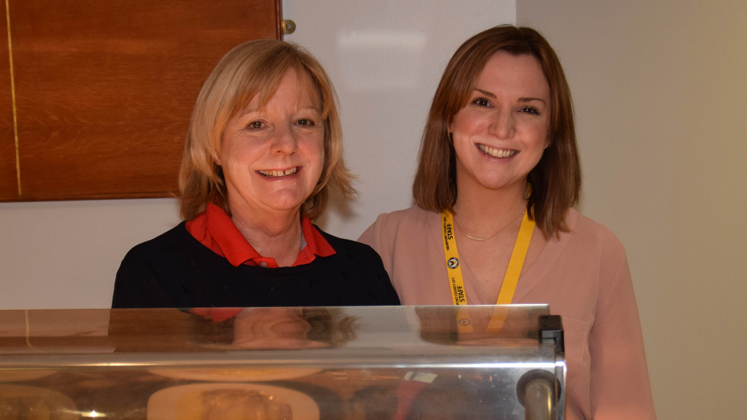 IN THE PICTURE: Rebecca Hemming (Right) with Volunteer Jane working in Hospitality on Match Day. [Photo by Nicola Johns]

“I became involved with Newport County AFC when I saw the job advertised and thought it looked like an interesting role. As part of the interview process, I attended a Home Cup game and was blown away by the character and unique atmosphere of County. I knew at that point that I really wanted to be part of the team.

“As Commercial Manager, I deal with all Sponsorship, Advertising and Hospitality bookings at the Club.  I joined the staff recently; my first day was the Tuesday after Monday night’s Emirates FA Cup Fourth Round Draw announcing we would be playing Tottenham Hotspur at home.  Quite a first week!”

“I first got involved with the Newport county AFC three years ago when I started as an intern for the Club’s Academy during my final year of University.   This season is my first working as the Lead sport Scientist at Newport county AFC Academy.

I travel to home and away matches with the U18s side and work with them at training during the week.” 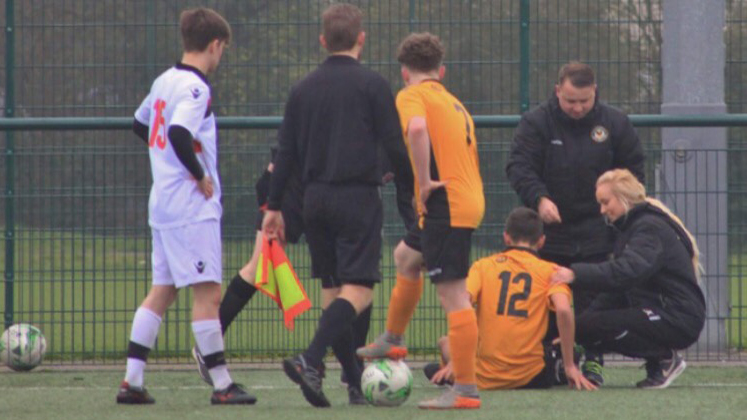 IN THE PICTURE: Leighanne performs her Physio duties during U18's Academy Match.

Danielle Seivwright, County in the Community Female and Health Co-Ordinator

“I was first introduced to Newport County through County in the Community (CitC). I was invited along to an initial meeting to find out about the community initiatives CitC deliver. After attending a few meetings, I was asked to join the board of Trustees at CitC which I agreed to without hesitation. After around a year and a half, I stepped down as a Trustee in order to become a full-time member of staff. I now conduct the role of Female and Health Coordinator and I thoroughly enjoy every second! My role consists of providing more opportunities for women and girls in Gwent to play football regardless of their experience. I also oversee programmes which aim to increase positive health behaviours of the wider Gwent community, especially to groups which are exposed to high risk factors.”

“I’ve been a County fan for many, many years since my son was involved at U17 level.  I started volunteering with the scouting side of the Newport County AFC and happened to see the advert come out about volunteer photographers.  Because I was an avid football photographer at the time anyway I thought ‘Well, I’ll send in a portfolio of photos and see what happens’ and it went from there. 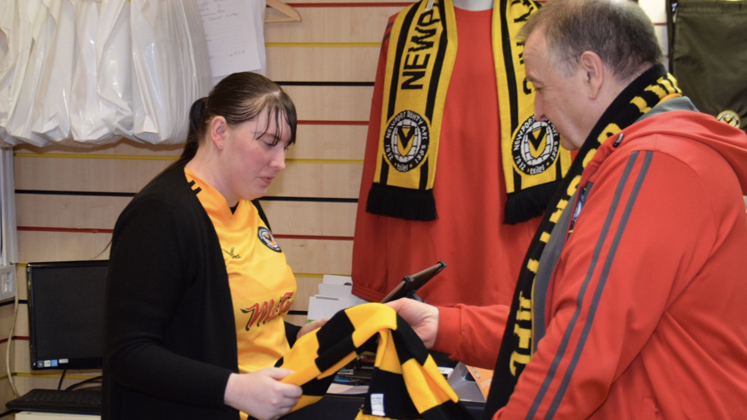 IN THE PICTURE: Volunteer Rebecca Hall working in the Club Shop on Match Day. [Photo by Nicola Johns]

“I’ve followed Newport County AFC for a long time with Robert [Susan’s Husband] and I’ve always been involved in the supporters Club as I’m the treasurer of that.  Once we retired, the Club needed someone to help at the shop and it’s just grown and grown.  I work at the shop when it’s open and on match days.  Robert and are also in charge of the sales at the away ticket end.”

“I’m in-charge of the guard of honour on match days.  I look after the kids, make sure they’re where they are meant to be, put them in their lines and get all the flags out.  At half time, we take the kids behind the goals and play a quick five-a-side game.  I got involved in County in the Community through Norman Parselle after I joined the We Wear the Same Shirt side which is a mental health team.” 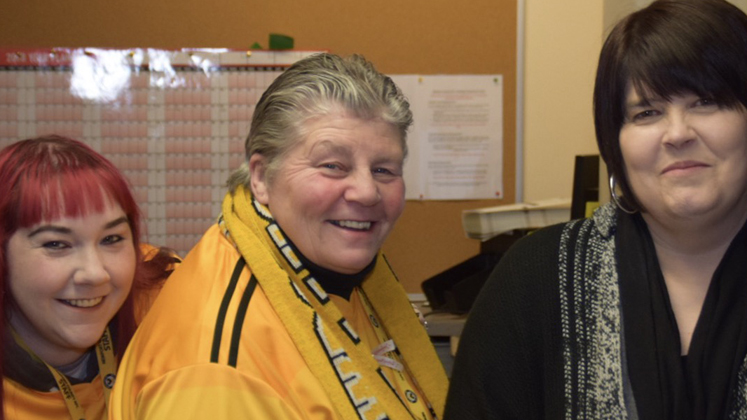 “My friend’s grandad took me over in 1997 or 1998, I saw them get promoted at Cinderford and ever since that I said to Phil Burgess and whoever was there at the time ‘if you ever need any help, just ask me’.  Ever since that I’ve done everything from dressing up as Spytty the Dog, flipping burgers, and helping out in Bar Amber; I’ve just done it all.  I now work in the Ticket Office and I love it.”

“We both volunteer in Hospitality at the food counter.  We are both avid County Supporters following them home and away since the Conference South days.  We also play walking football at the County in the Community sessions.” 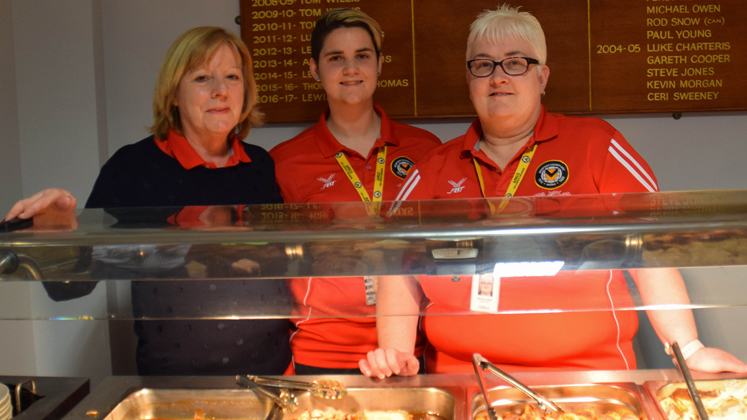 IN THE PICTURE: Volunteers Jane, Becky and Helen (L-R) working in Hospitality on Match Day. [Photo by Nicola Johns]

"I became a County fan through my day.  Here's a long-term Season Ticket Holder and I have been supporting the County since I was 10 years old.  I wanted to help my Home Club in some way.  I became a programme seller earlier in the season and I really enjoy it."

“My dad took me to my first game over at Spytty park when I was young. I can remember sitting there and jumping up when we scored and I loved it; this is how I knew that Newport County AFC were the team for me.  I am a volunteer that works within the Half Time Draw. I sell half time draw tickets on match days in the hospitality and away end of the ground.” 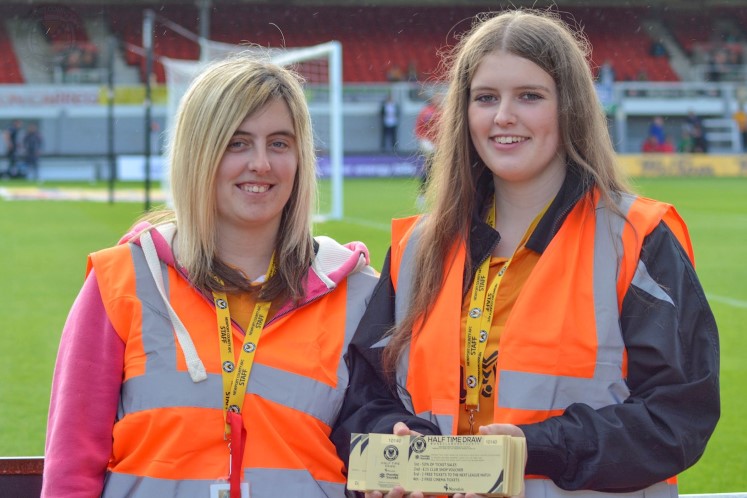 IN THE PICTURE: Leanne and Lucy brave the rain to sell Half Time Draw Tickets.

“There are lots of women of all ages who play an important role at Newport County AFC. It is undoubtedly a family club. Many give up their time to volunteer to ensure fans have the best experience on match days. Others like Danielle are part of County in the Community who do excellent work with young people across Newport and the rest of Gwent.  As a County fan I am proud of their commitment; they are a vital and valued part of our club.”

To continue our celebration of women at Newport County AFC, we’re going to be holding a “Women at County” day at our match on the 24th March when we face Crewe Alexandra.

We’ll be celebrating the success of the FAW Girls Programme (which has seen a fantastic rise in participation of girls and women in Football around Newport) and have invited five of the rising stars that came through the programme to enjoy Hospitaity with us.  We’re also planning a very special Q&A in hospitality and at Half Time, we’ll be hearing from some of the women who support and drive the Club forward.

We're still planning so look out for more updates!

County in the Community’s The PL Girls Programme will be launching very soon with opportunities for girls and ladies of all ages and abilities to start or continue playing football!  Want to make new friends, get some exercise, have some fun or even harbour dreams of becoming the next Jess Fishlock?  This programme suits everyone!

If you’d like to become a Newport County AFC volunteer like the women in this article, why not email office@newport-county.co.uk to find out more?

Get your tickets for
Newport County AFC vs Crewe Alexandra
just £5 per person!