Newport County AFC will be looking to bounce back to winning ways in League Two when they host Northampton Town on Tuesday night. The Exiles head into the game only out of the top three on goal difference, whilst the visitors are a little further behind in the table but on a recent resurgence that sees them having lost only once in their last nine league outings.

Here, you can read all the facts and statistics ahead of this League Two encounter. 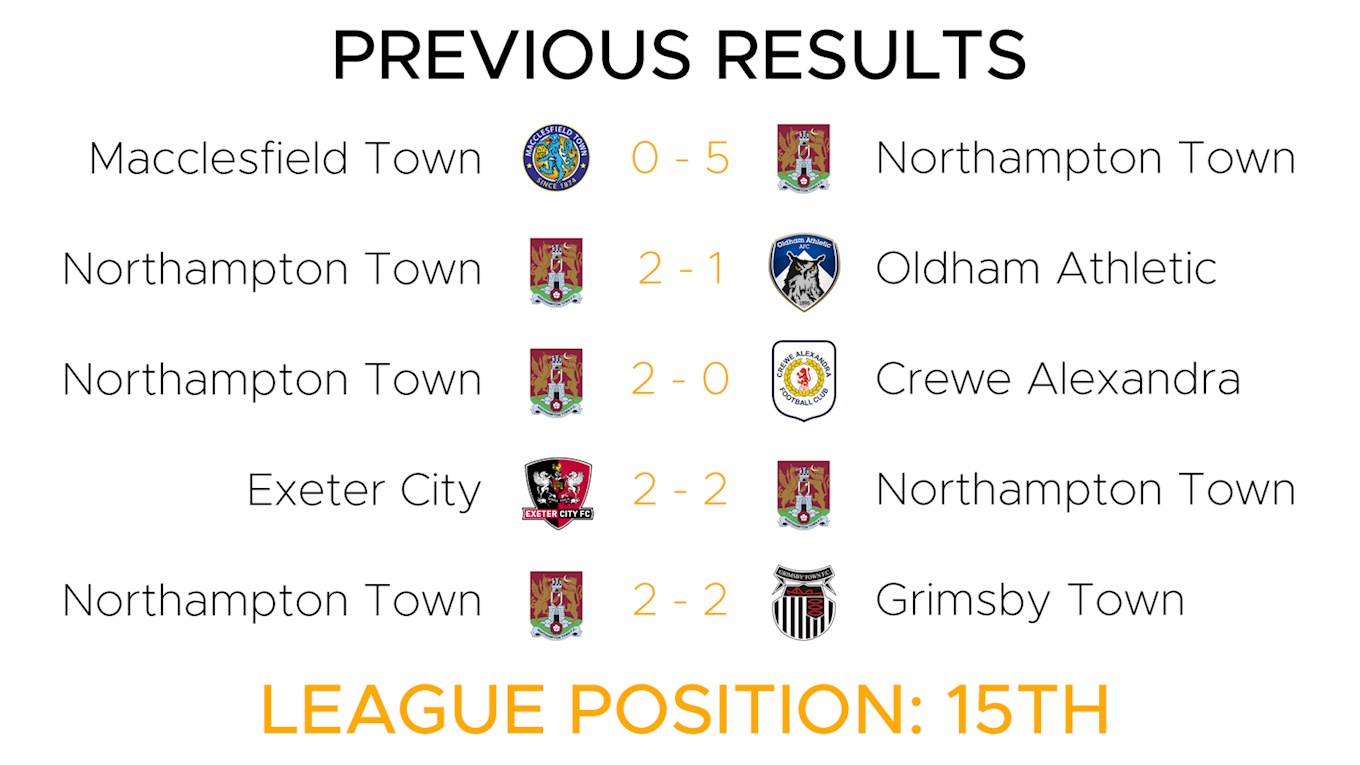 Since Keith Curle’s appointment as manager at the start of last month, Northampton Town have become one of the form sides in League Two and have picked up 11 points from the last 15 available.

That run starts on 23rd October as they secured their most emphatic victory of the season with a 5-0 away success at basement boys Macclesfield Town. Matt Crooks scored an incredible 43-minute hat-trick - whilst striker Daniel Powell and defender Aaron Pierre added the extra gloss onto a perfect performance.

In their next fixture, things weren’t so easy for the Cobblers, but they managed to fight for more than fifty minutes with 10 men and still secure a 2-1 victory over Oldham Athletic. Ex-Exile Sam Foley was dubiously dismissed after John-Joe O’Toole opened the scoring, then Kevin Van Veen converted a penalty to give them a healthy advantage. Robert Hunt got the Latics a late consolation, but Northampton held on.

That was the first time Northampton had won back-to-back league fixtures all season and they duly made it three on the spin with a 2-0 victory over Crewe Alexandra. Striker Andy Williams and Powell scored either side of half-time to keep the Curle resurgence going.

Since then, Northampton have felt differing emotions when drawing their last two league matches 2-2, starting by salvaging a point in stoppage time away at play-off hopefuls Exeter City. The Cobblers came from behind on both occasions, Billy Waters and Williams cancelling out goals from Jake Taylor and Jayden Stockley.

On Saturday, Northampton twice surrendered the lead as another scintillating performance from Mariners goalkeeper James McKeown secured Grimsby Town a 2-2 draw at Sixfields. Williams and Van Veen both found the target, but 10-man Grimsby fought back through Charles Vernam and Harry Cardwell.

Northampton Town manager Keith Curle has a couple of selection dilemmas to ponder ahead of bringing his side to Rodney Parade.

In definitive team-news, forward Junior Morais completes his three-match suspension against the Exiles, whilst striker Dean Bowditch, defender Leon Barnett and influential midfielder Matt Crooks are expected to miss out through injury.

Curle then has to decide to what extent he plays defenders Ash Taylor and Shay Facey after the defenders both featured on Saturday – but the Northampton boss might think two games in four days is too much for players recently returning form injury.

He commented: “We are getting some players back now and team selection is going to be very competitive and as a manager that is a good problem to have.”

One to Watch – Kevin Van Veen

Currently Northampton Town’s top scorer for the season with eight goals, striker Kevin Van Veen has finally found his best form for the Cobblers this campaign having not scored in his first five months as a player at Sixfields.

Six of those goals have come in the league, accruing his side four points, following strikes against Grimsby Town, Oldham Athletic, Cheltenham Town, Carlisle United and two against Cambridge United. The Dutchman also netted in the CheckaTrade Trophy against Oxford United and at Lincoln City in the Emirates FA Cup.

This spell with the Cobblers is the 27-year old’s second stint in the English game as Van Veen initially started his pathway into football back home in the Netherlands.

His performances at FC Oss in particular started to write some headlines when he netted 16 goals in 21 appearances and Scunthorpe United won the race for his signature for an undisclosed fee.

That came in January 2015 but he struggled initially to adapt so was shipped out on loan to SC Cambuur midway through the 2015/16 campaign – his first opportunity of playing in Eredivisie, the top tier of Dutch football.

It appears that Van Veen returned a completely different player and he was one of the top performers in the country for the first-part of 2016/17. Chinese Super League side Henan Jianye had a £4 million bid rejected as Scunthorpe United looked to mount a promotion bid to the Championship, although they were ultimately unsuccessful in the play-offs.

Last season again started off well for Van Veen so Northampton stumped up the cash for his signature back in January, although he couldn’t get any goals to keep them in the division as they were relegated on the final day of the campaign. 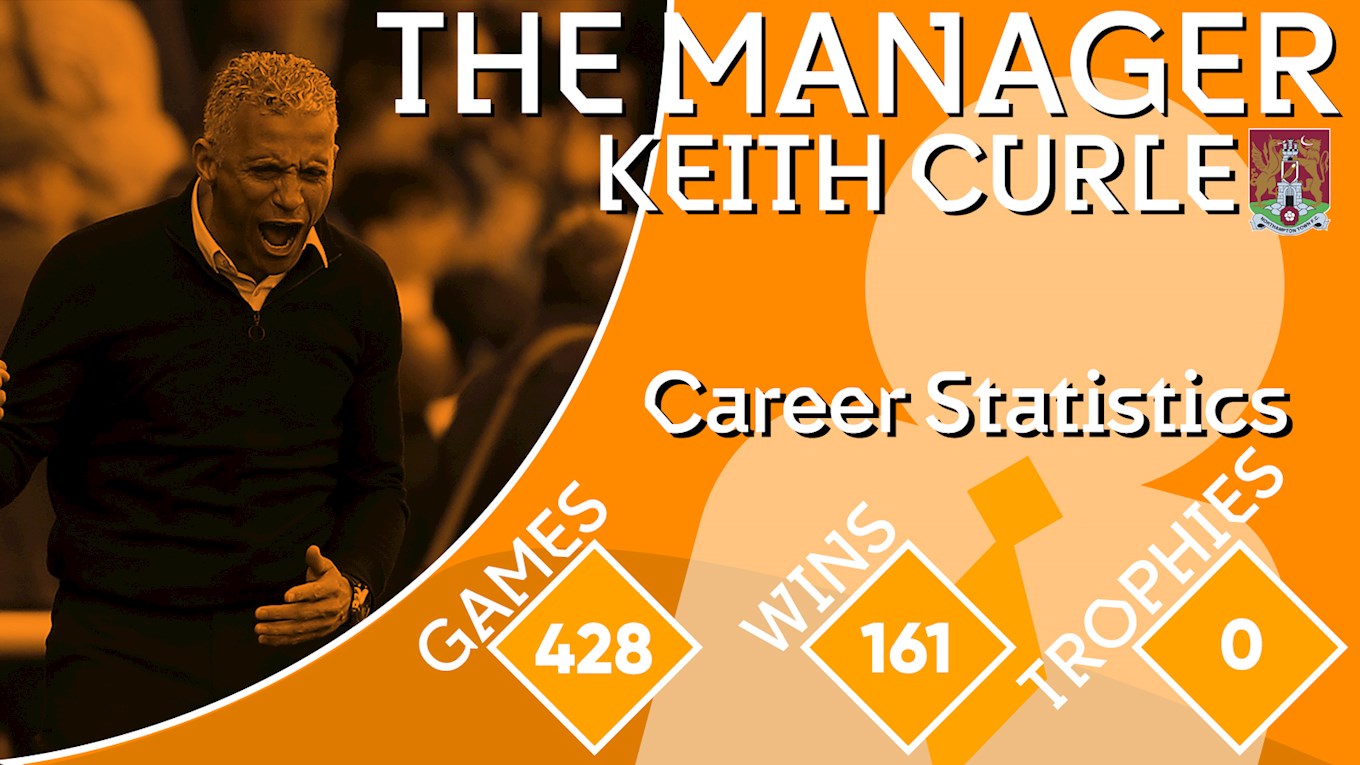 A highly experienced Football League manager, it is no coincidence that Northampton Town’s recent upturn in form has corresponded to Keith Curle’s appointment as manager on 1st October.

The Cobblers have only lost twice out of the 12 games he has taken charge of, those coming in League Two away at high-flying MK Dons and in the Emirates FA Cup to Lincoln City.

Northampton have ascended six places in the table since his appointment – as Curle embarks on his sixth managerial position.

Starting out at Mansfield Town as a player-manager in December 2002, Curle couldn’t prevent them from relegation into the fourth-tier but did get the Stags to the play-offs in the subsequent season, although they lost on penalties to Huddersfield Town in the final.

He was dismissed in December 2004 following a poor run of form and he could only last nine months at Chester City after a disastrous run of form that saw the club go through a horrible sequence of 11 defeats from 12 matches.

Curle’s next spell at Torquay United didn’t fare much better either as he failed to save them from relegation during his short-stint contract – with the 55-year old electing to move into coaching and joined Neil Warnock’s staff at Crystal Palace then QPR.

He returned to management in February 2012 at Notts County but not even an incredible record of going 22 consecutive away matches unbeaten could save Curle from being dismissed less than 12 months into the role.

Carlisle United then came calling for Curle’s services and he spent four seasons with the club before leaving for pastures new – leading them into the play-offs in 2016/17 a particular highlight of his reign with the Cumbrians. 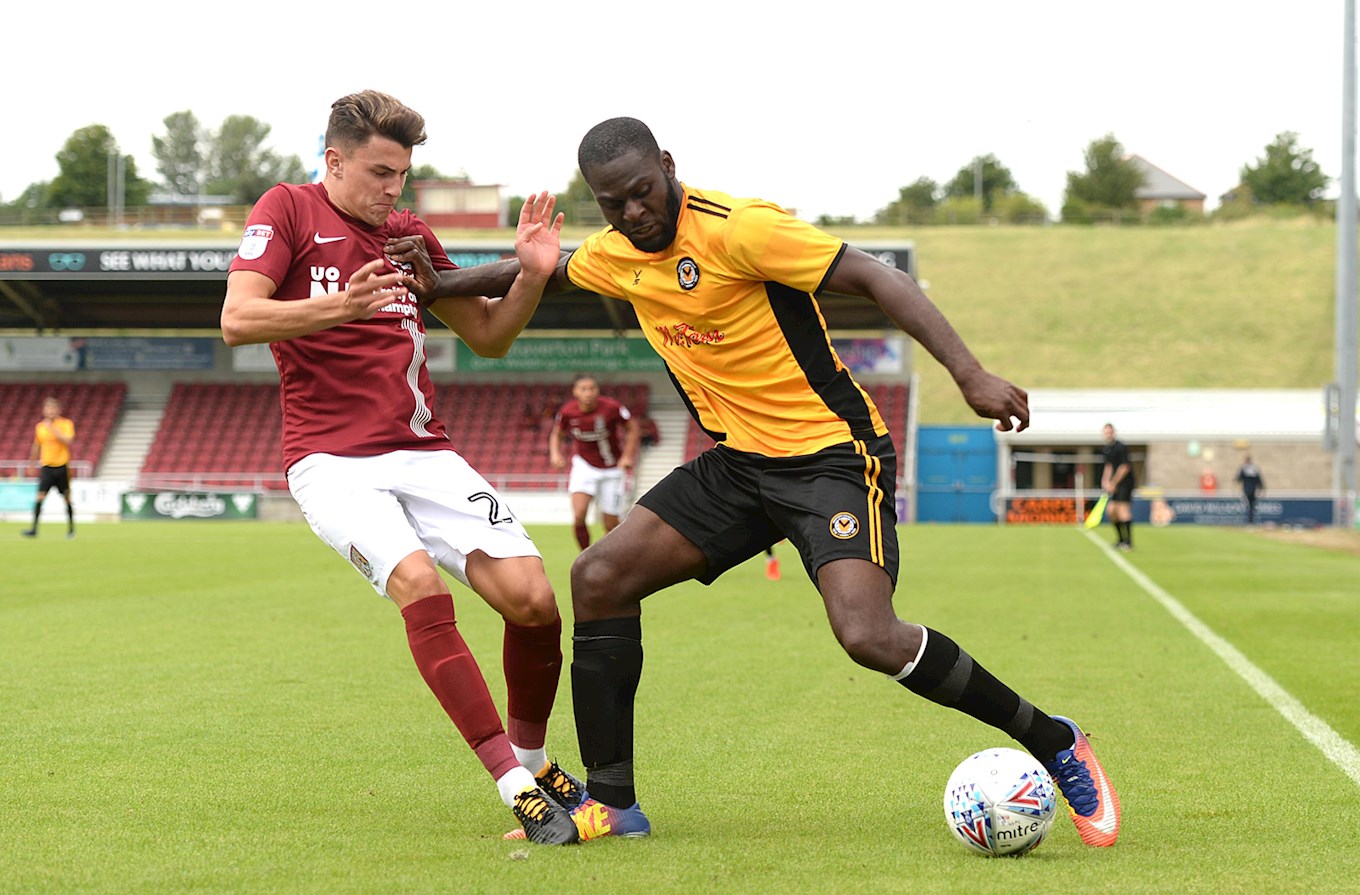 There has been 89 competitive fixtures between County and Northampton Town, with six of those meetings coming after the reformation in 1989.

The Cobblers have the better record across those matches – having won 45 of the previous encounters. They have defeated County 5-0 on four separate occasions, whilst there was also a 7-0 success in 1929 and an 8-0 victory in 1932.

County and Northampton have drawn on 15 occasions, meaning the final 29 competitive encounters all went the way of County. That includes a 5-1 victory in 1935, a 5-2 victory in 1931 alongside 3-0 wins on four occasions.

Looking at the more recent history between the sides, they last met in League 2 during the 2015/16 campaign which saw the Cobblers crowned champions after accumulating an impressive 99 points.

County only took a point off Northampton in their historic campaign, a 2-2 draw at Rodney Parade on 31st October 2015, whilst there was also a 1-0 home victory for the Cobblers on 25th March 2016.

Read the match report from that last encounter between the two sides. 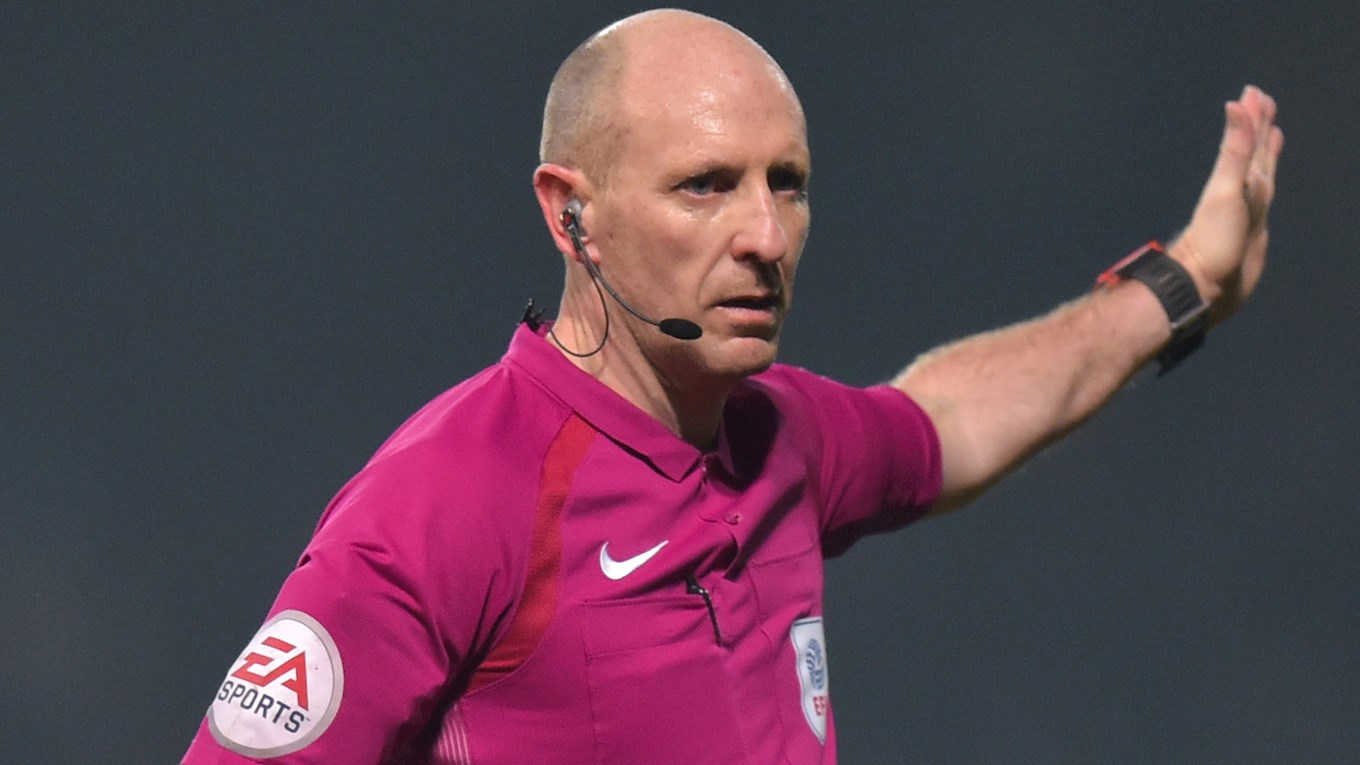 Davies is currently embarking on his seventh season as a Football League referee having officiated his first game in League Two on 18th August 2012 as Morecambe secured a convincing 3-0 away victory at Exeter City.

He is also on the list of referees in the Championship, with Davies having refereed 11 of his 15 matches so far this season in the second tier.

From those previous matches, Davies has given out 54 yellow cards and one red card, including five yellows in his first match as Paul Hurst celebrated his first game in charge of Ipswich Town with a stoppage time equaliser against Blackburn Rovers in the 2-2 draw.

Not a single fixture has passd without Davies going to his pocket, with the lowest figure of one yellow card being brandished on just two occassions.

The solitary red card awarded by Davies this season came on 1st September 2018 as Ben Pearson was dismissed in stoppage time as Preston North End drew 2-2 with Bolton Wanderers at Deepdale.

Those statistics follow on from the 31 matches in which Davies officiated in the 2017/18 campaign, a season that saw him brandish 104 yellow cards and six red cards. 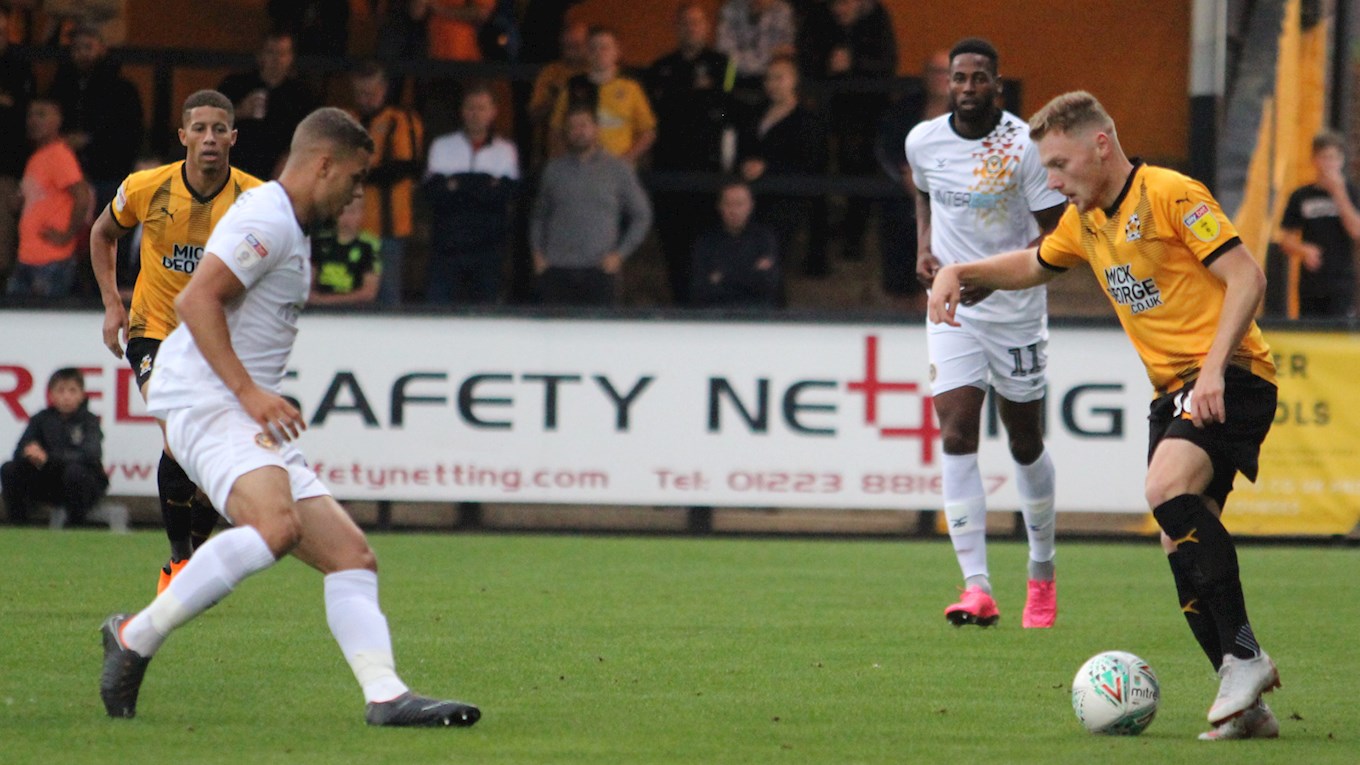 Davies has refereed a match involving Newport County AFC on eight previous occasions in League Two, the CheckaTrade Trophy, the Carabao Cup and the Emirates FA Cup. He is not the luckiest of omens, however, as the Exiles have only managed three wins and five defeats in matches officiated by Davies.

He has already refereed County this season and it came in arguably the best performance of the campaign so far on 14th August 2018 as the Exiles cruised to a 4-1 away success at Cambridge United in the First Round of the Carabao Cup. Fraser Franks was the only played booked as Padraig Amond scored a contender for goal of the season.

Watch the goal that involved nine County players in a 14-pass move.

Apart from that game, it has been over two years since Davies refereed a match involving the Exiles, although it was one of the remaining wins in a 2-0 success over AFC Wimbledon in the CheckaTrade Trophy on 8th November 2016. Tom Owen-Evans and Joss Labadie were booked for County amongst four yellows in total.

He officiated one other County match in the 2016/17 campaign and that also came in the CheckaTrade Trophy. Jordan Green scored to give County the lead on 30th August 2016, but Plymouth Argyle ultimately fought back for a 4-1 victory. Paul Bignot received the only yellow card.

Home Park was again the destination for the Exiles in the next game presided over by Davies, although it was another victory for Plymouth in a 1-0 success on 29th August 2015. No yellows awarded to either side.

He was also the man in the middle when Jay Simpson’s late penalty gifted Leyton Orient a narrow success over County on 26th January 2016. Mark Byrne, Medi Elito and Yan Klukowski were all cautioned on that occasion.

Next comes the 1-0 home defeat to Mansfield Town on 3rd March 2015, a game in which the Stags eased their relegation worries thanks to Reggie Lambe’s late match winner. No cards brandished by Davies at Rodney Parade.

The remaining two matches can be found in the 2013/14 campaign, starting with the 1-0 victory for the Exiles in an Emirates FA Cup replay against Braintree Town on 19th November 2013. Robbie Willmott’s free-kick was enough to send County through to the Second Round of the competition, whilst Danny Crow was booked.

Davies’ list of County matches is completed by the 2-1 defeat to Mansfield Town on 8th March 2014. Rene Howe equalised in the game and was also booked, alongside yellow cards for Byron Anthony, Andrew Hughes and Chris Zebroski.