Newport County AFC will be looking to ascend into the League Two play-offs for the first time since early December when they host Oldham Athletic on Tuesday night. The Exiles must take advantage of their game in hand on the top seven, while the Latics will be hoping to conclude the season strong having been knocked out of the play-off picture. 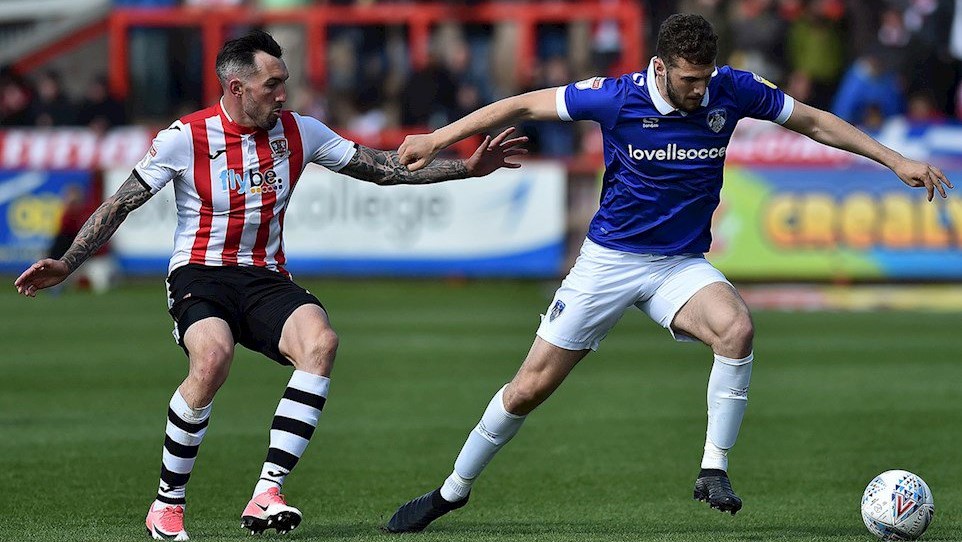 Defeat last time out means Oldham Athletic can no longer mathematically reach the League Two play-offs but that doesn’t mean they won’t be looking to see out the campaign in style ahead of a promotion push next season.

The Latics have been on good form since the beginning of March but their poor run in the early part of the season has caught up with them and they can no longer finish higher than 8th this season.

From the last five games, they have picked up eight points, starting with a morale boosting 2-0 victory at fellow play-off aspirers Colchester United on 6th April. Alex Iacovitti and Callum Lang got the goals in Essex.

Next comes back to back draws as the Latics played out an entertaining 2-2 draw with Swindon Town – George Edmundson and Johan Branger finding their names on the scoresheet – before a goalless stalemate at Cheltenham Town.

Gevaro Nepomuceno’s double and Mohamed Maouche’s neat finish gave them another impressive result, this time a 3-2 home victory over Mansfield Town, but a narrow 1-0 defeat to Exeter City on Saturday means their season will conclude this weekend. 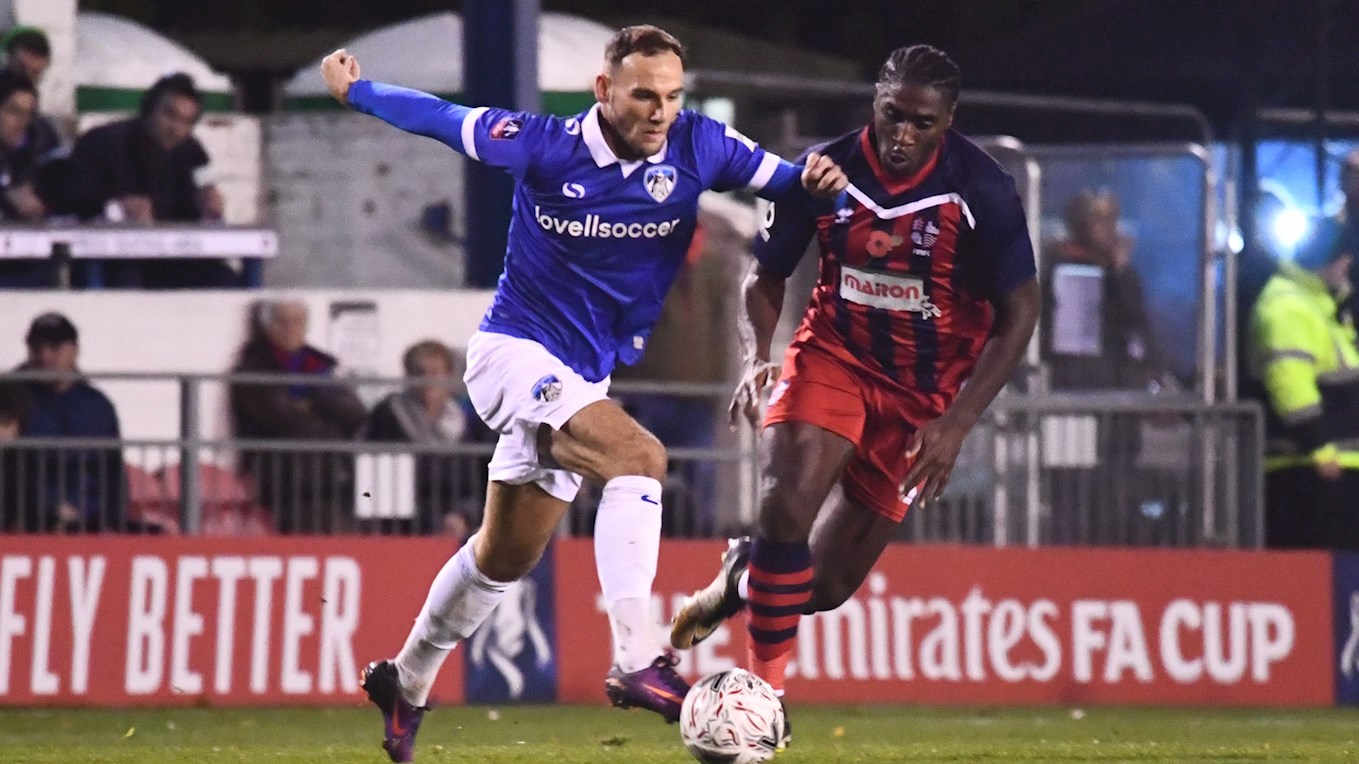 Oldham Athletic manager Pete Wild appears to have a couple of injury headaches to contend with as he prepares to bring his Latics side to Rodney Parade.

Long term absentee Dan Gardner will definitely be missing from the midfield, while up to four players could be put through late fitness tests.

Johan Branger, Jose Baxter and Oladapo Afolayan all came off the bench on Saturday but the Latics might throw caution to the wind over their inclusion having only just come back from injury.

On loan Zak Dearnley will also be assessed prior to kick-off.

One to Watch – Callum Lang 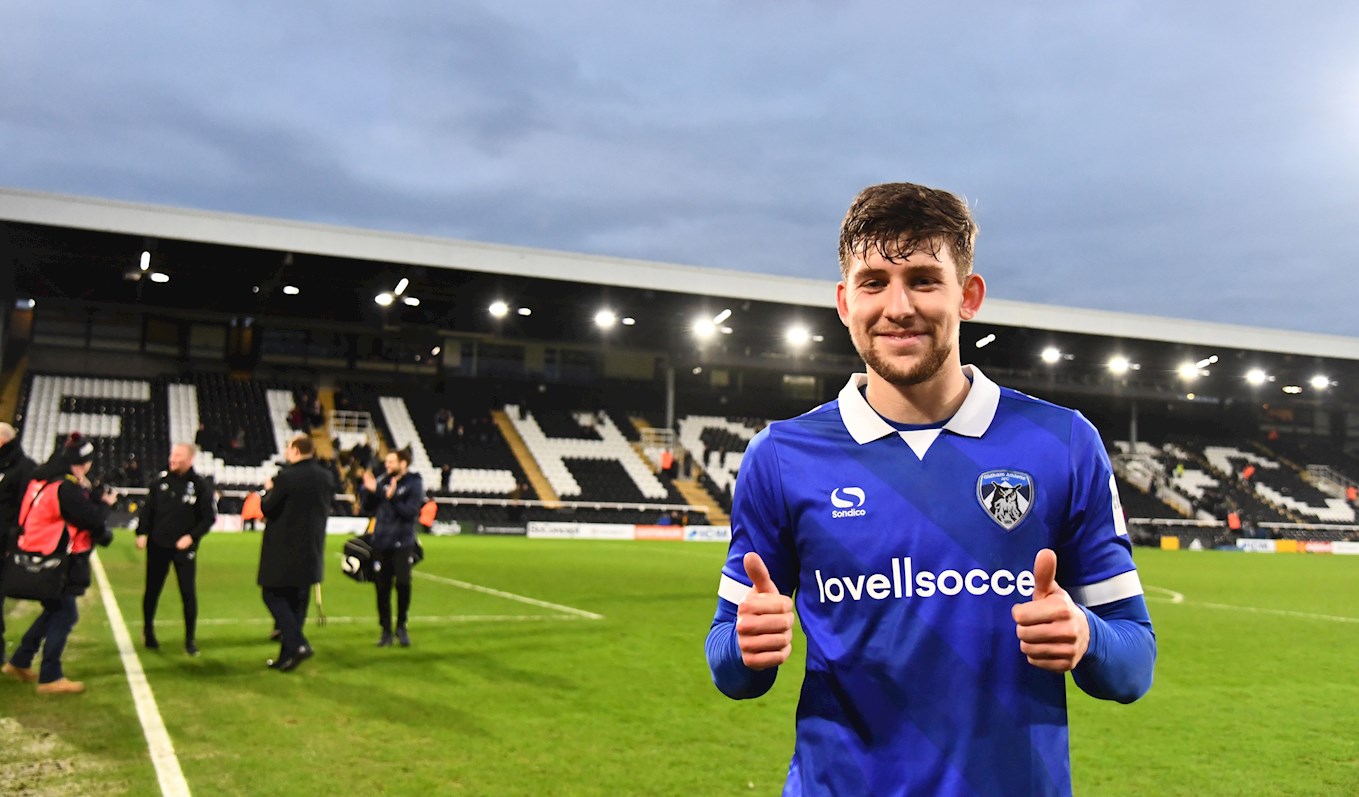 Currently Oldham Athletic’s top scorer for the campaign, Callum Lang has again impressed in League Two this season having joined the Latics on a season long loan from Wigan Athletic.

Alongside a couple of assists, Lang has bagged 15 goals from 48 appearances across all competitions. He found the target against Cheltenham Town, Stevenage, Cambridge United, Exeter City, Port Vale, Yeovil Town, Crewe Alexandra, Bury FC, Grimsby Town, Colchester United, two against Tranmere Rovers and in the various cups against Fulham, Hampton and Richmond and Bradford City.

It’s been another remarkable season for the 20-year old who spent the last campaign on loan at Morecambe. At the Globe Arena, he bagged 10 goals from 34 appearances and is a name to watch out for in the future.

Starting off initially at hometown club Liverpool, Lang made the move to Wigan in 2013 and made three appearances for them in the cup competitions last season before heading to Morecambe. 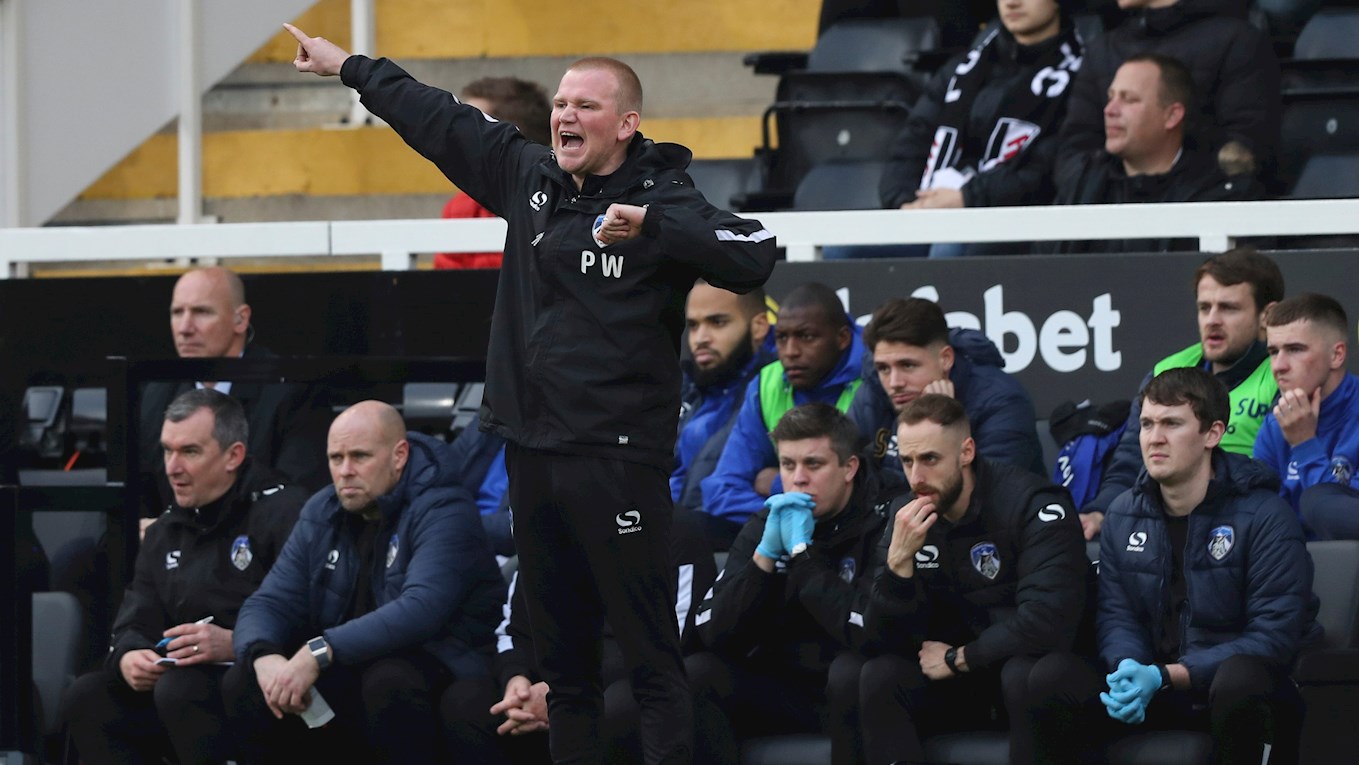 A boyhood fan of the club, Pete Wild has done a fabulous job with Oldham Athletic and was recently named as manager until the end of the campaign.

The 33-year old has been working at the club for more than a decade and was surprisingly selected as caretaker manager just after Christmas following the sacking of Frankie Bunn.

Four wins from eight matches in temporary charge – including at Premier League Fulham in the Emirates FA Cup – wasn’t enough to get the job permanently as the club went for another boyhood fan in Paul Scholes.

After the Manchester United legend resigned after just 31 days, Wild was then appointed again but this time until the end of the campaign.

He heads to Rodney Parade with a 53.33%-win ratio across the two spells. Oldham have tasted success on eight occasions, drawing three matches and suffering eight defeats. 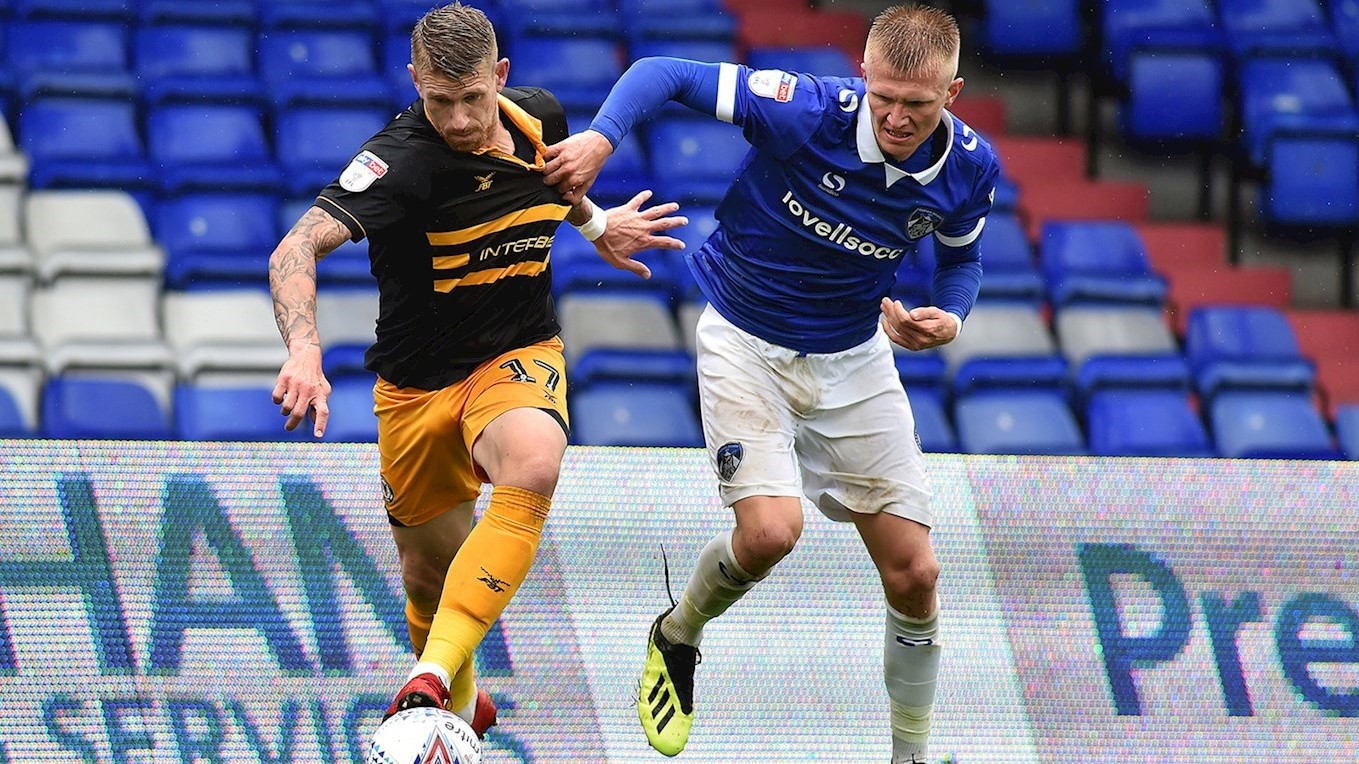 Manager Michael Flynn came out post-match and labelled his defence as ‘absolute machines’ as they prevented the Latics to just two shots throughout the entirety of the contest.

Fraser Franks bravely blocked Callum Lang’s effort which then trickled into Joe Day’s gloves, before the shot stopper had to be alert to thwart Dan Gardner’s close-range effort after a mazy run from the midfielder.

That defensive platform gave County something to build upon and they took all three points from their first trip to Boundary Park in 37 years with the matchwinner on 69 minutes.

David Pipe’s tenacious work down the right resulted in a cross into the area, that was cleared as far as Matty Dolan then Dan Butler, the left-back playing a splitting pass into Bakinson who took one touch before firing a shot across Zeus De La Paz into the far corner from 10 yards.

Read what Mike Flynn and Mickey Demetriou thought of the contest. 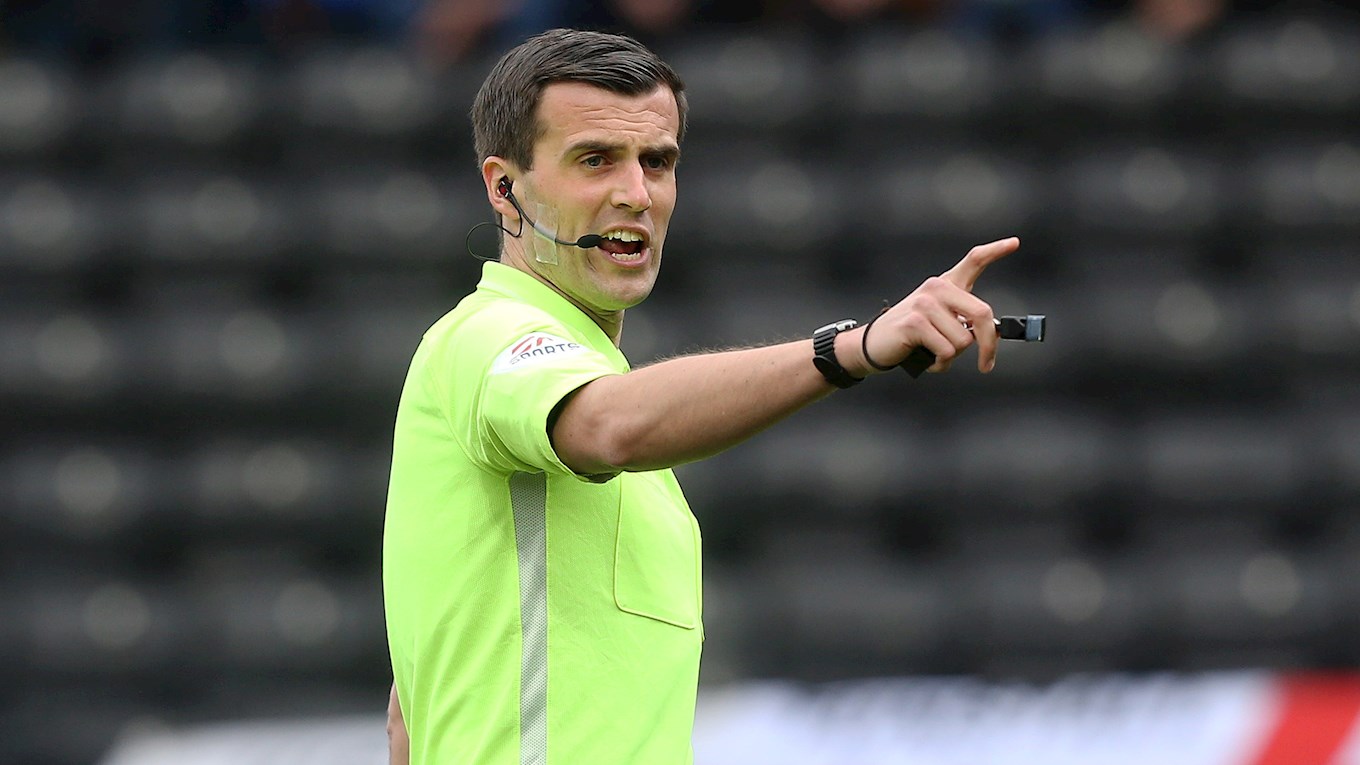 Hicks is currently embarking on just his second season as a Football League referee having officiated his first game in League Two on 12th August 2017 as Wycombe Wanderers battled to a 3-2 away victory at Port Vale.

He has refereed 38 matches thus far this season, brandishing 109 yellow cards and five red cards, including no cards of any colour as Accrington Stanley plunged Plymouth Argyle into relegation trouble with a 5-1 home victory last Saturday.

That match at the Wham Stadium is one of three matches this season where Hicks hasn’t gone to his pocket – the other games being Portsmouth’s victory at Southend United on 8th January and Scunthorpe United’s draw with Sunderland on 19th January.

His record number of yellow cards given out for a solitary fixture this season stands at seven, a figure awarded twice – Doncaster Rovers’ win at Southend United on the opening day and Portsmouth’s draw with Wycombe Wanderers on 22nd September.

That follows on from Hicks’ debut season as a Football League referee in 2017/18, where he brandished 124 yellow cards and six red cards from 38 matches across the entirety of the campaign. 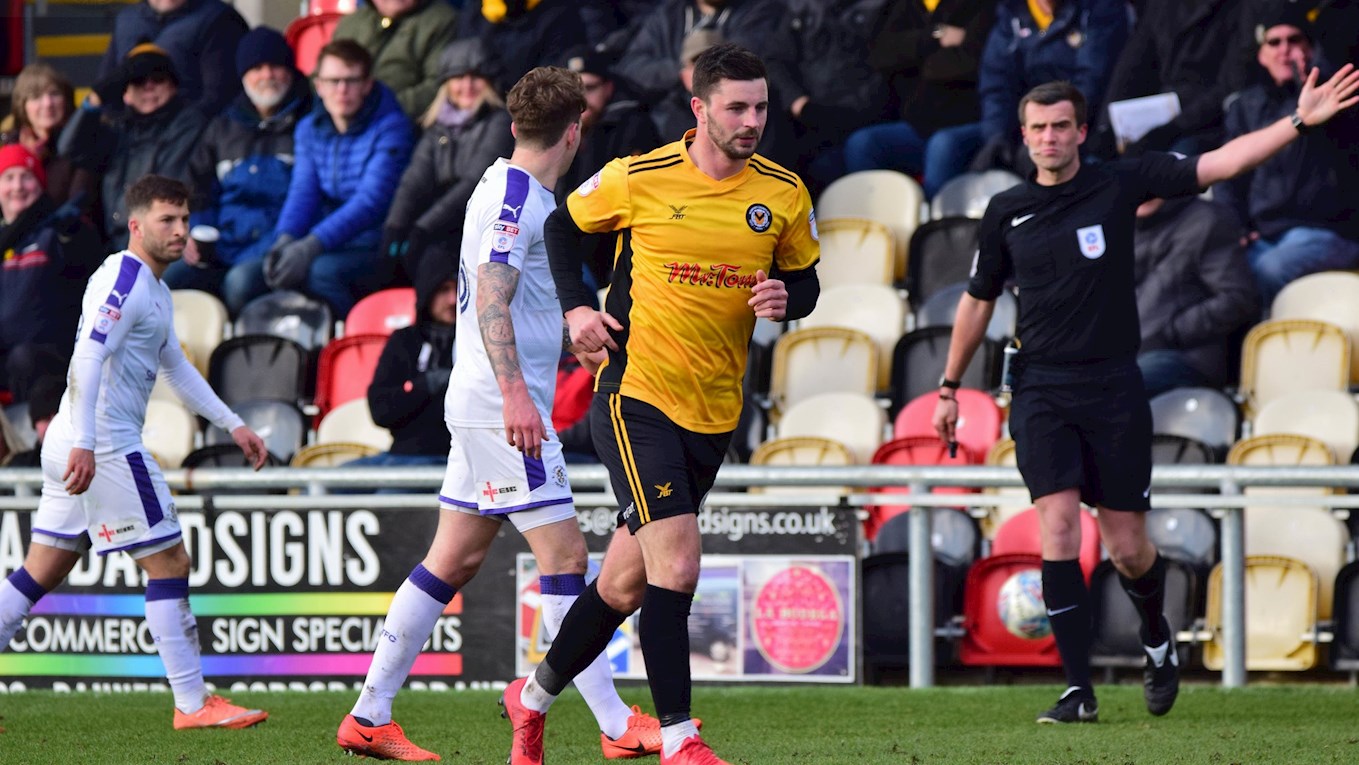 Hicks has refereed a match involving Newport County AFC on four previous occasions across League Two and the Emirates FA Cup. The Exiles have a mixed bag of results from those prior results having won one, lost one and drawn the other two.

He has already presided over a County match this season and it came as Joe Day was the hero to preserve the Exiles’ place in the Emirates FA Cup with a 0-0 at Wrexham AFC. Mark O’Brien and Josh Sheehan were booked on 1st December 2018.

All the other previous County matches officiated by Hicks came last season, starting with the 26th September 2017 as a pair of Mickey Demetriou headers were enough for a 2-1 away victory at Crawley Town. Five yellow cards were given out in total for this fixture - Dan Butler, Joss Labadie and Ben Tozer all given a caution from a County perspective.

Next comes the 3-0 reverse at Notts County on 28th October 2017 as a stunning individual display from Nottingham Forest loanee Jorge Grant saw the Magpies to victory. Dan Butler was dismissed but it was then rescinded, alongside yellows for Frank Nouble and Demetriou.

The remaining County game overseen by Hicks was 17th March 2018 as Josh Sheehan traded goals with Dan Potts in the 1-1 draw with Luton Town at Rodney Parade. Mark O’Brien and Matty Dolan were the only two players booked.