Newport County AFC is delighted to announce ticket news for Wednesday's home pre-season friendly against Chelsea U23s at Spytty Stadium, a match where 50% of all gate receipts will go towards former County and Blues defender Fraser Franks.

All tickets will be for the Main Stand only and will be on sale from 6pm at Spytty Stadium's main reception.

Tickets prices can be found below:

As previously stated, 50% of all proceeds will go to former County defender Fraser Franks, who started his career in Chelsea's academy.

The 28-year-old fan favourite, who joined County at the start of the 2018/19 season, has been forced to end his playing career on medical advice due to a heart issue.

Fraser appeared in 320 matches during his senior career, playing for AFC Wimbledon, Welling United, Luton Town, Stevenage and County, scoring 19 goals – including 34 appearances and three goals for the Exiles.

Speaking ahead of his feature interview in Wednesday's 16-page programme, Franks said: "Firstly, I want to thank both clubs and the supporters for their support because it’s going to make a big difference for myself and my family. I’ve been overwhelmed with the support since I announced my retirement and it’s a fantastic gesture that County and Chelsea U23s are playing this fixture.

"The gate receipts will be split between myself and my family and also Clwb Spytty which is important because it means the children of Newport will also benefit from this game. I still don’t think that I deserve something like this because I was only at the club for one season, but this will really help myself and my family and it gives me an opportunity to take some time to work out what’s next for me in my career."

The club, alongside Clwb Spytty and the Newport County AFC Supporters Trust, will also be hosting a Family Fun Day in the build-up to kick-off which will also raise funds for Franks.

This will also be held at Spytty Stadium between 2pm - 5pm and will feature a host of exciting activities including music from Newport City Radio. 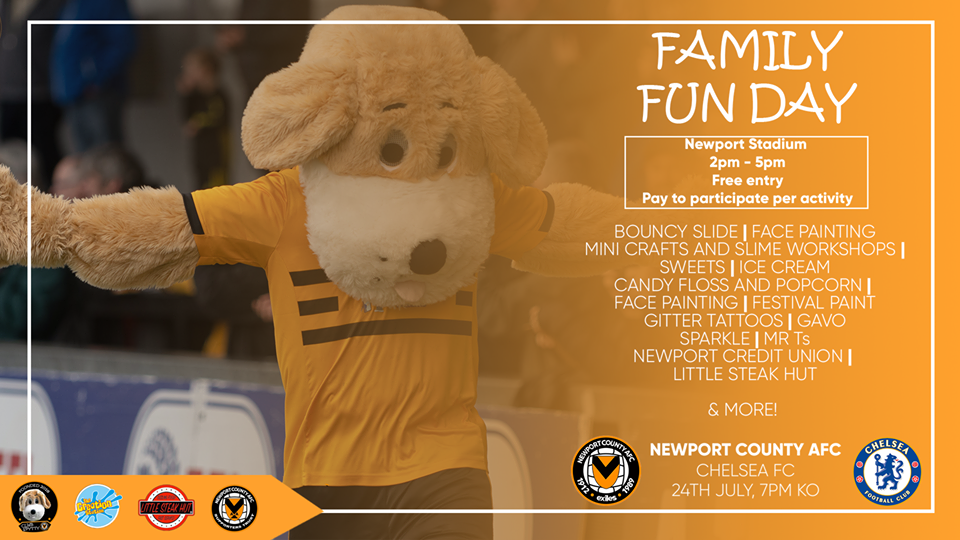 The Club would also like to place on record it's thanks and appreciation to Newport Live for the time and effort put in to host both our Family Fun Day and the friendly match against Chelsea Under 23's. On behalf of all County fans, it is very much appreciated.

We look forward to seeing everyone on Wednesday!