Newport County AFC will be looking to keep their League Two play-off hopes alive when they travel to Yeovil Town on Saturday. A 15-day break between league fixtures should mean the Exiles head into the game fresh and looking for a certain amount of revenge, while the home side are currently desperate for points in their battle to stave off relegation to the non-league.

Here, you can find the facts and statistics ahead of this League Two encounter…

It’s been nothing short of a disastrous few weeks for Yeovil Town who now have to be considered real relegation contenders alongside Notts County and Macclesfield Town who currently compose the bottom two.

Their downfall can be traced as far back to just after they secured their emphatic victory at Rodney Parade on 15th September – a result which took them to a season high of fifth – but certainly in the more recent results, some tricky statistics have started to show.

The Glovers have only scored 10 goals since the turn of the year in League Two and just six of those have come in the last 12 matches. Only two sides have picked up less than their tally of three from the last 15 points available and destiny of League Two survival is now theoretically out of their hands.

Sol Campbell’s Macclesfield side are currently trailing Yeovil by two points but have a game in hand and the Glovers recently lost at home to the Silkmen when a victory would have given them some much needed breathing space over the drop zone.

They haven’t scored in any of their last four matches following the 3-2 triumph over Morecambe when Tristan Abrahams found the net twice alongside Ryan Seager. Since then it’s been four successive defeats to Lincoln City (1-0), Port Vale (3-0), Macclesfield Town (2-0) and MK Dons (2-0). 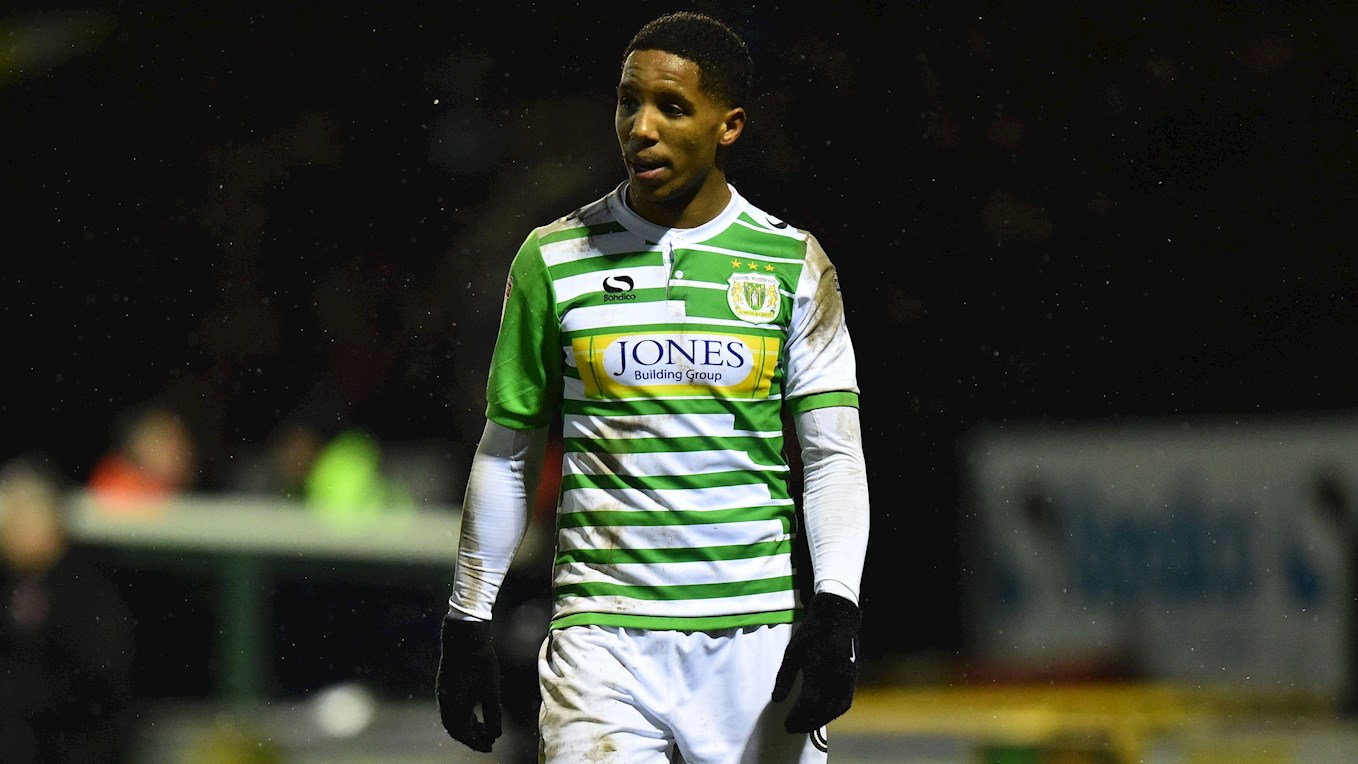 Caretaker manager Neale Marmon looks likely to have near enough a fully fit squad to choose from ahead of welcoming County to Somerset on Saturday.

Only midfielders Rhys Browne (hamstring) and Alex Pattison (back) missed the trip to MK Dons last weekend so they will be assessed ahead of this fixture.

Marmon must then decide on what sort of team he chooses to field for his first game in caretaker charge as he tries to galvanise a struggling Yeovil side, so he may rotate players and / or formation on the weekend.

One to Watch – Carl Dickinson 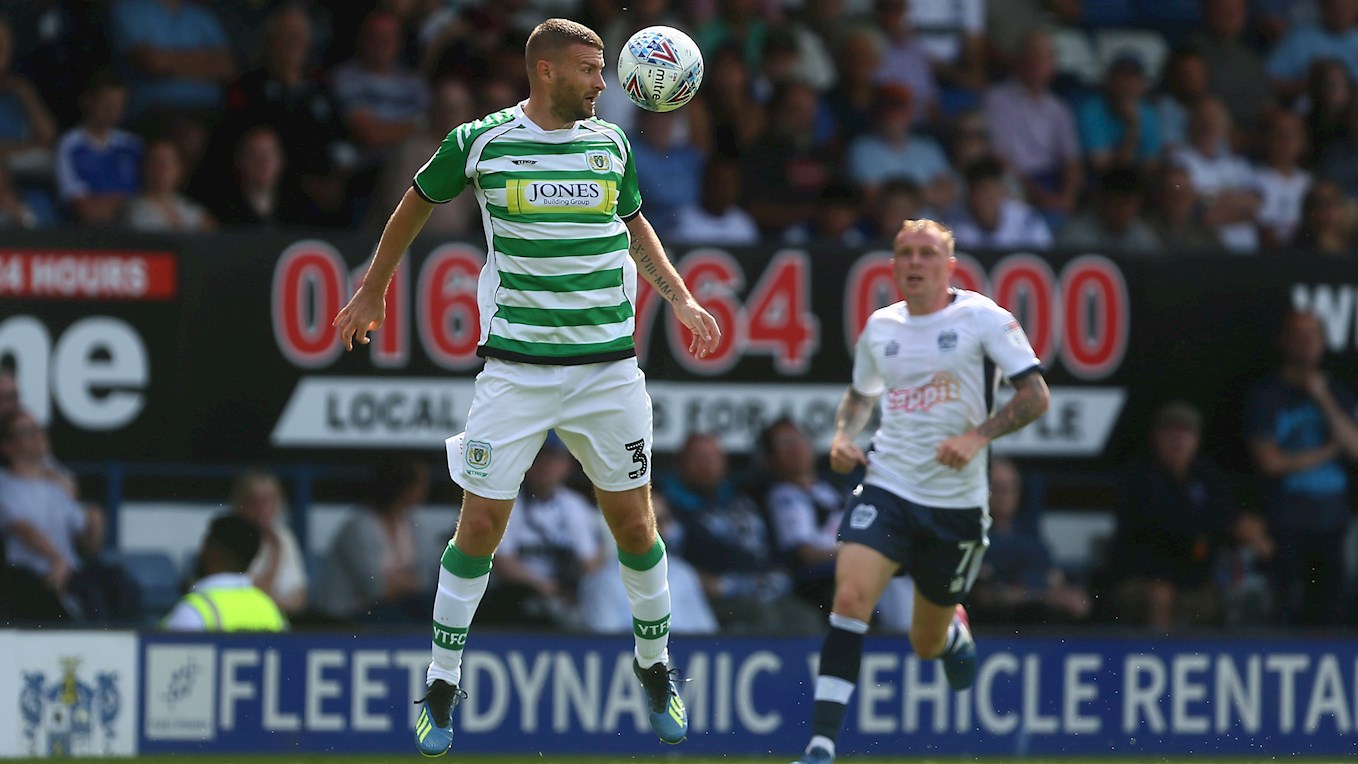 No player has particularly stood out for a struggling Yeovil Town side in recent weeks or months, but highly experienced defender Carl Dickinson has always performed well against the Exiles and is a consistent performer for the Glovers.

Featuring in 37 games to date this season, the left-back has chipped in with two goals including an excellent free-kick in the reverse fixture against County back in September, alongside another against Crawley Town later in the same month.

A solid player that has featured in the top four English divisions for virtually the entirety of his career, Dickinson has five Premier League appearances to his name alongside a Championship promotion medal from his seven years as a professional at Stoke City.

Numerous loan spells also occurred during his stint with the Potters – a club where he also spent part of his youth career – as Dickinson found himself at Blackpool, Leeds United, Barnsley, Portsmouth and Úrvalsdeild (Iceland) side Víkingur.

A move to Watford – then of the Championship – materialised in 2011 before he moved on to Port Vale then Notts County via loan spells at Portsmouth and Coventry City.

Dickinson signed for Yeovil at the start of the current campaign. 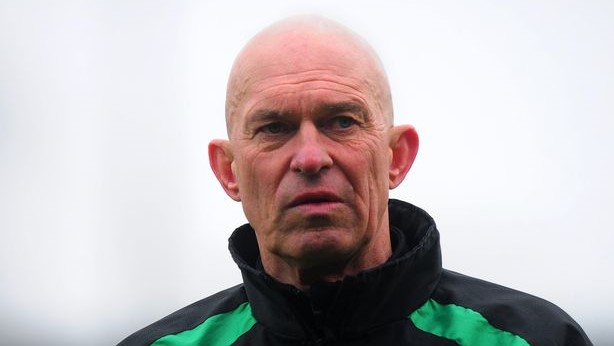 A somewhat inexperienced manager, 57-year old Neale Marmon was surprisingly promoted to the role of caretaker manager for the rest of the season after Yeovil Town parted company with Darren Way over the weekend.

Brought in by the former manager back in January to help out with first-team affairs, Marmon is currently the bookies favourite to take over on a permanent basis even though he’s never taken charge of a game in England – let alone in League Two – yet.

His managerial career to date all stems in Germany – where he spent a lot of his playing days – with Marmon previously being player/manager of SV Elversberg and briefly took charge of Sc Preußen Münster back in 2002.

Marmon also had spells in a coaching capacity at FC Kutzhof and SG Schwemlingen/Tünsdorf/Ballern, leaving the latter of those clubs at some point recently to first join the coaching staff at Yeovil and now become their caretaker manager. 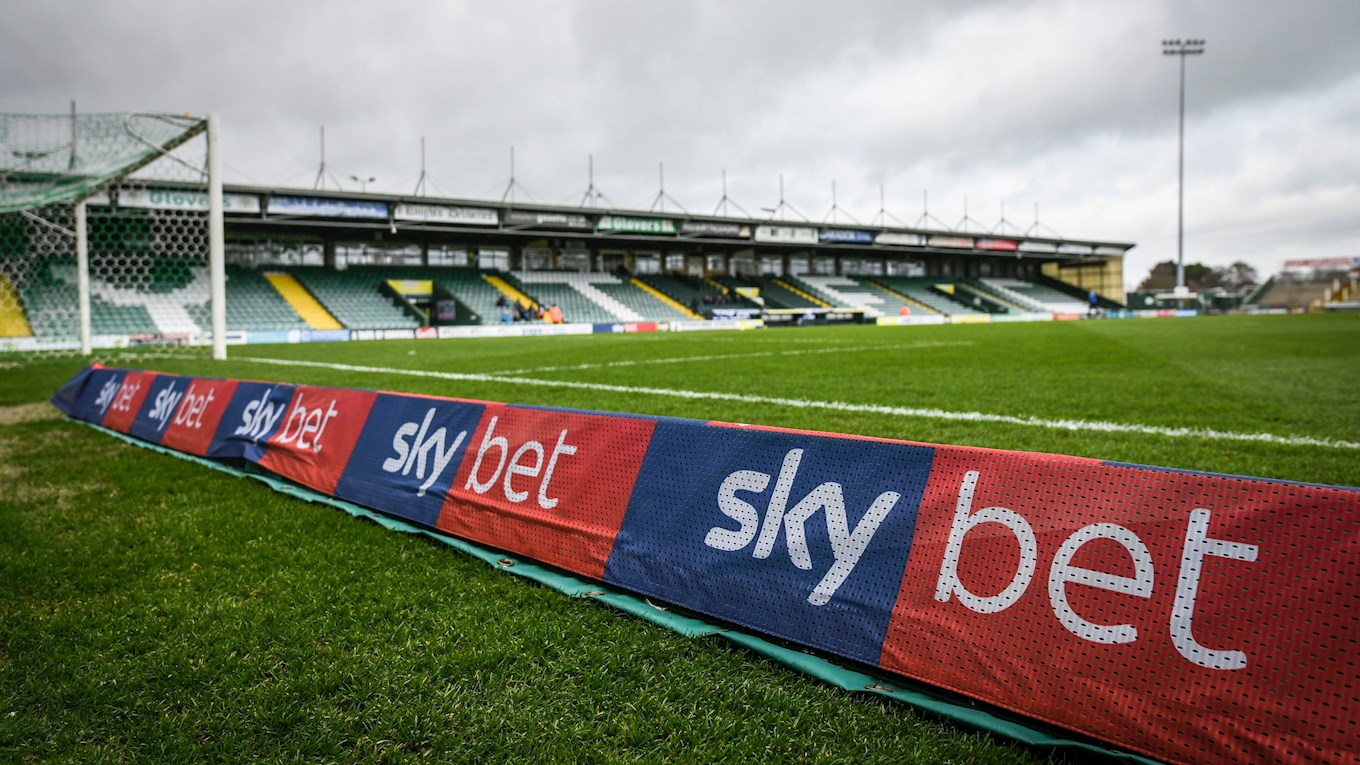 A familiar stadium to County supporters in recent years and at a familiar time of year with Huish Park being the closest of the four stadiums still left to visit this season in League Two.

On what will only be the fourth ever visit to the Somerset venue for the Exiles, this will be third occasion that the match has been played in either March or April.

A relatively small stadium, Huish Park has an overall capacity of 9,565 across seating and terracing, with the record attendance set just under that figure as 9,527 were there for the visit of Leeds United on 25th April 2008.

On matchday, County supporters will have a mixture of terrace and seating tickets both alongside one side of the pitch and behind one of the goals.

Coincidentally, it was again 439 supporters composing the away end at Huish Park last season as County secured a 2-0 on 10th March 2018 victory thanks to Josh Sheehan’s first goal in over a year and Paul Hayes’ strike in stoppage time. 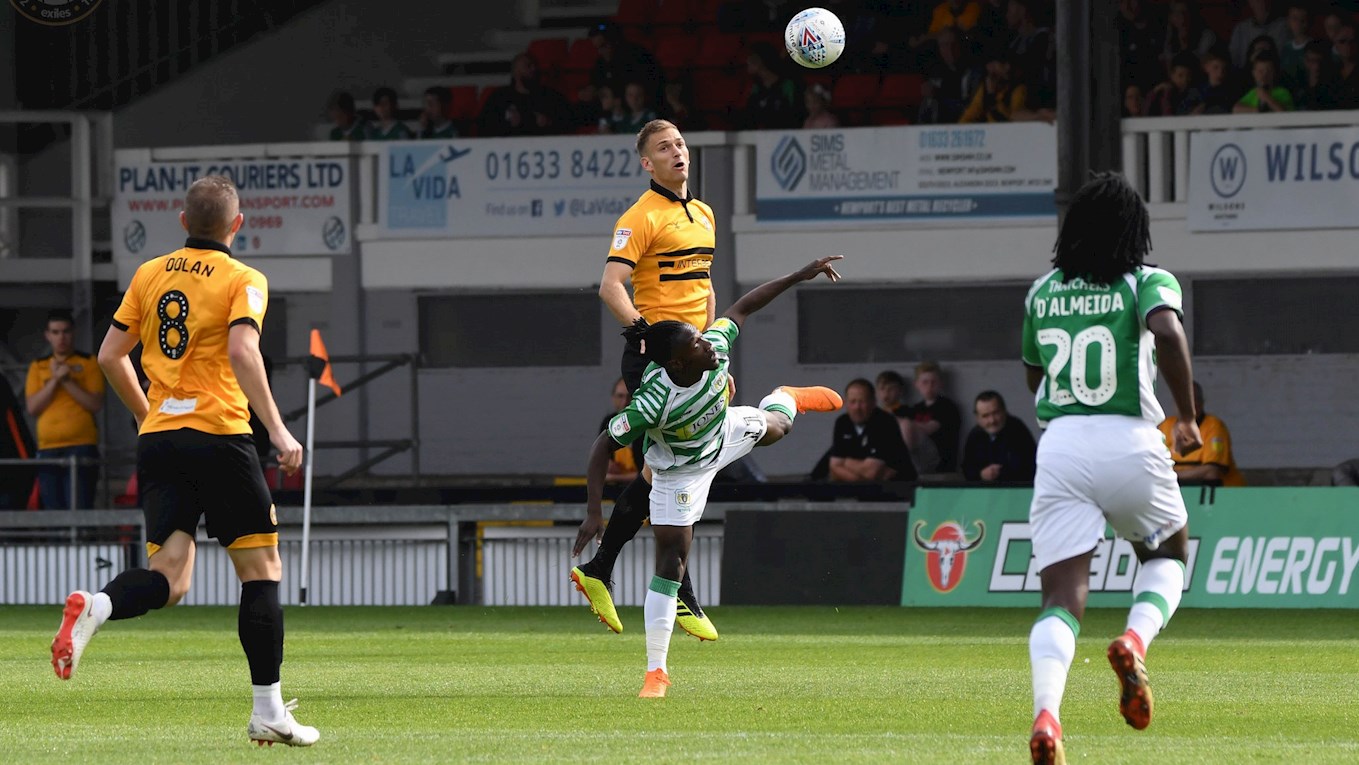 It’s fair to say that revenge will be firmly on the mind when Newport County AFC head to Huish Park on Saturday as they will be trying to overturn a miserable afternoon which occurred in the reverse fixture between the sides.

It was a match where nothing went for the Exiles and everything went for the traveling Glovers as the visitors secured their most emphatic Football League victory in their history and the biggest away success for a League Two side in seven years.

It was fair to say ex-Exile Jordan Green – whose performances earnt him a move to Barnsley in January – was enjoying the return to Rodney Parade and he grabbed two goals himself alongside an assist for the opener which was converted by Yohan Arquin.

Goals from Diallang Jaiyesimi, Olufela Olomola and a free-kick by Carl Dickinson completed the scoring in South Wales as County failed to rise to the summit of the League Two table. 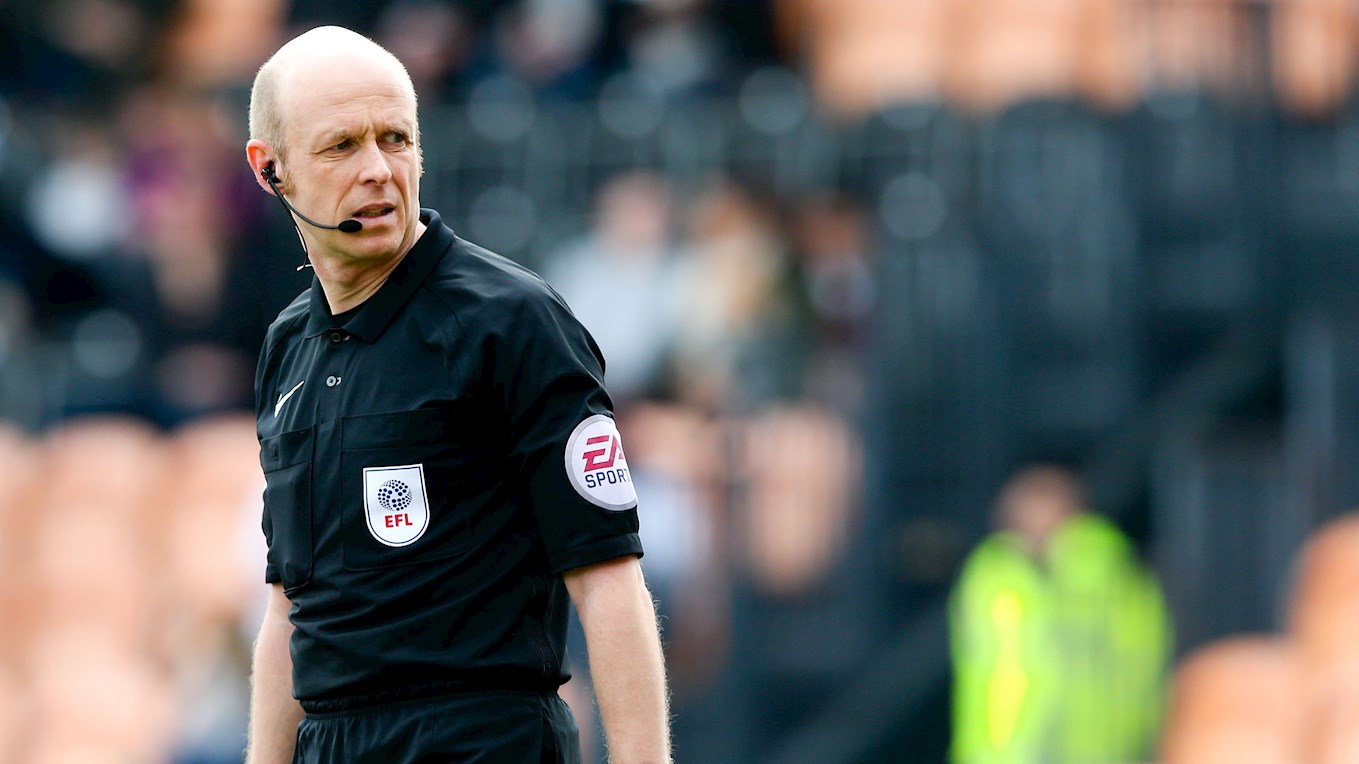 Kinseley is currently embarking on his fourth full season as a Football League referee having officiated his first game in League Two on 17th January 2015 as Exeter City won a five-goal thriller away at Mansfield Town.

He has refereed 20 games thus far this season, giving out 60 yellow cards and two red cards, including three yellows and one red on the opening day of the season as Wycombe Wanderers and Blackpool played out a 0-0 draw.

Only one game has passed this season without Kinseley going to his pocket – Oldham Athletic’s comfortable away victory over Grimsby Town on 15th September.

His league high number of yellow cards stands at six during AFC Wimbledon’s away victory over Gillingham on 8th September, whilst the other red card brandished this season went to ex-Sunderland defender Michael Turner during Southend United’s home defeat to Blackpool.

Those statistics follow on from refereeing a total of 29 matches across all competitions in the 2017/18 campaign, a season in which Kinseley gave out 124 yellow cards and six red cards throughout the entirety of the campaign. 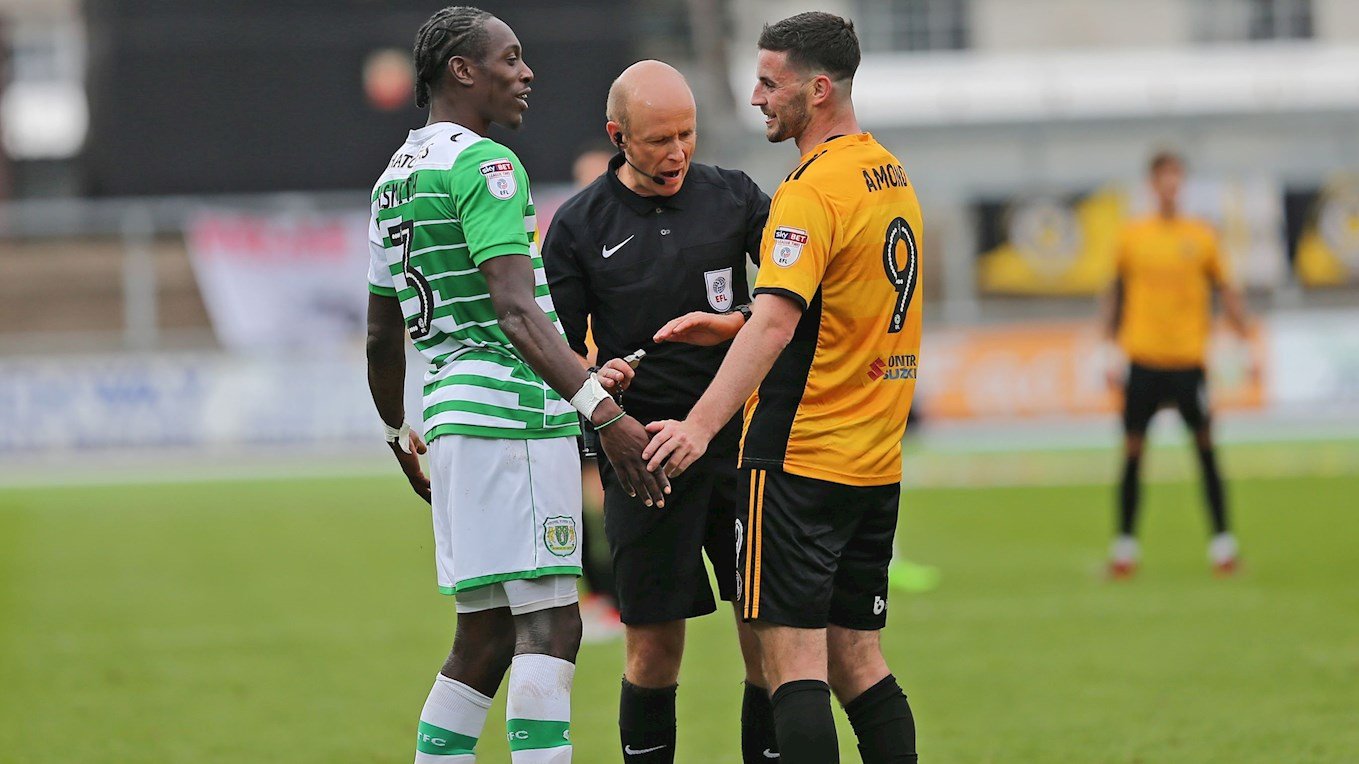 Kinseley has refereed a match involving Newport County AFC on nine previous occasions in League Two and the Conference. The Exiles have a mixed bag of results from the previous matches, having won three, drawn once and lost the other five.

He has already presided over a County fixture this season and that came on 12th January 2019 as Crewe Alexandra made a late comeback to win 3-2 at Gresty Road. Antoine Semenyo and Jamille Matt were both cautioned.

Last season, Kinseley only officiated one match involving the Exiles, but it was a game in which they ensured a best start to a Football League season since 1982 with a comfortable 2-0 home victory over struggling Yeovil Town on 7th October 2017. Joss Labadie and Matty Dolan both booked.

In 2016/17, Kinseley took charge of two County fixtures, starting with the 2-1 home defeat to Cambridge United on 24th September 2016. Reece Grego-Cox, Ben Tozer, and Rhys Healey all booked for County during the game.

In the 2015/16 season, a further three County games were presided over by Kinseley, including the 2-2 draw in the opening home game of the season against Stevenage on 15th August 2015. No bookings for the Exiles.

Next comes arguably the highlight result of the season as the Exiles stormed to a 4-1 away victory against Bristol Rovers on 24th October 2015. Medi Elito received a yellow card at the Memorial Ground.

In County’s promotion campaign of 2012/13, Kinseley officiated a further two fixtures including when Jamille Matt scored an all-headed hat-trick against the Exiles in a 3-2 victory for Kidderminster Harriers on 8th December 2012. No bookings.

Kinseley was also the man in charge as County booked themselves a place at Wembley with a 1-0 play-off semi-final victory over Grimsby Town on 18th April 2013.