Clive Hutcherson has been following The Exiles for over a decade and has held a Season Ticket every year since their return to the EFL.

Along with Glyn Teague, the pair were chosen as joint “Supporter of the Year” last season for their incredible commitment to following “The ‘Port” with journeys to Carlisle and Tuesday evening trips to Morecambe all part of the territory for Clive and Glyn.

Supporters Club Secretary Jeff Challingsworth said: “Glyn and Clive went to virtually every home and away first team game last season.  They support every event that we put on and they take part in every fundraiser that we do.  When it came to voting for a Supporter of the Year, for us, it was a no brainer.”

At the kit launch, Mr. Teague spoke of his delight at receiving the award.

“The Supporters Committee voted for the award and both myself and Clive were really pleased to be selected for the award – and for Clive to receive the Shield from Joe Day and David Pipe was a great gesture from the club,” he said. 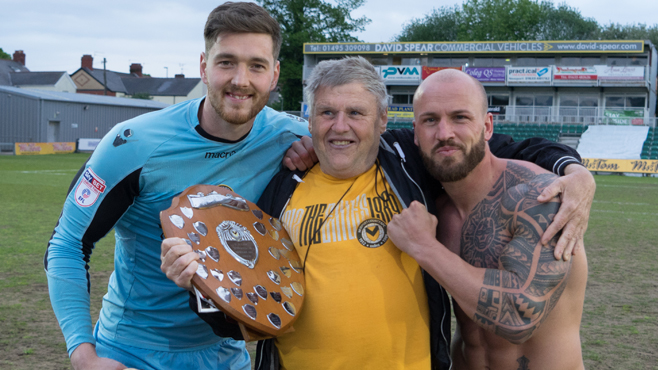 Looking to the coming season, they would both like to emulate their achievements from last season and have set their expectations high.

Mr. Teague said: “Our plan for next season is to keep on supporting the club, getting to as many games as we possibly can and I firmly believe that we can finish in the top 10 this season.”

READ MORE ABOUT THE SUPPORTERS CLUB

SEE THE ONE CLUB COUNTY LAUNCH