The Newport County Ladies team are a squad of around 18 players aged between 16-42. Whilst they have long-term ambitions to rise through the leagues and compete with some of the best ladies’ players across England and Wales, they are currently focused on representing the Club in a positive and professional manner.

Players’ Player of the Year for last season, Georgie Cridland, was chosen to represent the team in the photoshoot after a stunning first year in the side.  She was voted Players’ Player for demonstrating the unity and belief which runs through the entire Club but she’s also determined that the side will improve next season.

She said: “Last season, we were pretty much a new team. A lot of us moved up from u16’s so it took us a while to gel together as a team. Once that happened we performed really well.

“We finished middle of the table this year which I think is excellent for a new team.

“Like any team, some players will go and we will have some new additions but we should all be okay with that.

“16 is probably the youngest in the team and then it goes all the way up to 40 so there’s a lot of diversity within the team which is another positive for us and we need to take it forward next season.”

County in the Community Trustee, Paul Lovell, presented Georgie with her Players’ Player of the Year award at half time during last Season’s dramatic finale with Notts County. 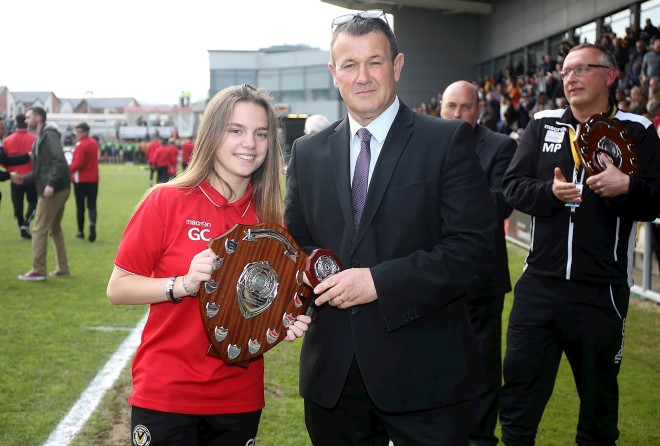 LEARN MORE ABOUT THE LADIES TEAM

SEE THE ONE CLUB COUNTY LAUNCH