Newport County AFC will be looking to keep their play-off hopes alive when they entertain high-flyers Bury FC on Good Friday. The Exiles have only conceded one goal when going unbeaten from their last five matches, although face an altogether different challenge from the Shakers who only need two more goals to bring up a century across all competitions.

Here, you can find the facts and statistics ahead of this League Two encounter… 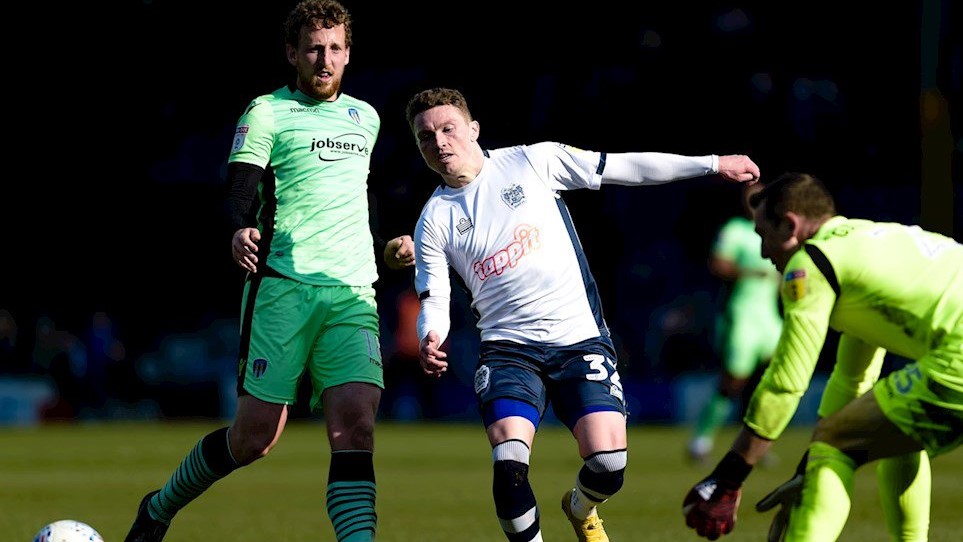 Bury FC have destiny in their own hands in terms of automatic promotion to League One with the Greater Manchester outfit knowing winning every game from now until the season’s conclusion will see them bounce straight back to the third tier.

The Shakers are the case in point when it comes to how many twists and turns there could still be before May 4th, with the wheels seemingly coming off for the side after a four-game run without a win yet all three points last time out lifted them back up to second.

A dip in form is understandable considering all the off the field problems in recent weeks – an adjournment on a winding up petition by the High Court last week, failure to pay the players wages on time for March and the team going on a 48-hour strike.

In the most recent five matches, the Shakers have accumulated just four points, starting with a battling draw at Grimsby Town on 23rd March.

Three successive defeats to Swindon Town, Cambridge United and Carlisle United appeared to suggest Bury FC had bottled the opportunity to go up automatically, but Dom Telford’s double to defeat Colchester United on Saturday arrested those worries ahead of four crucial fixtures. 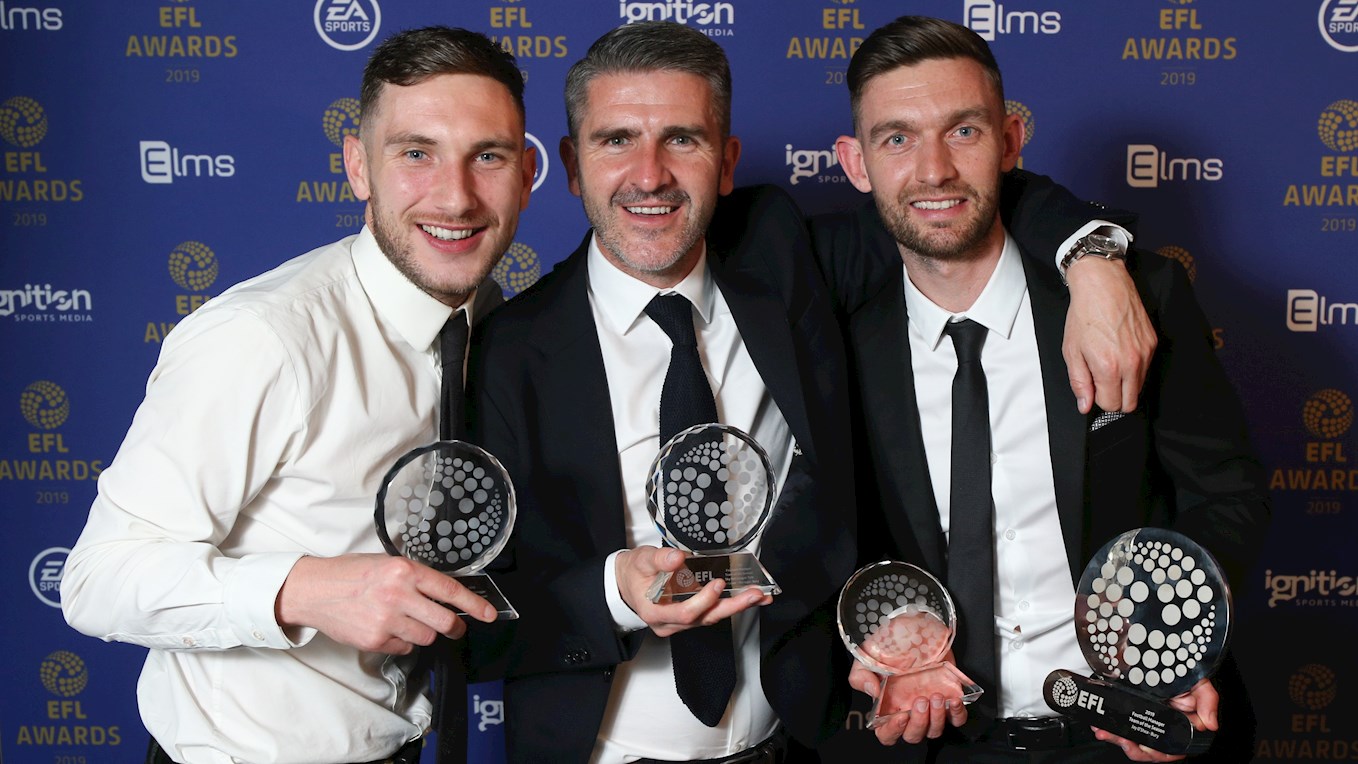 Bury FC manager Ryan Lowe appears to be able to call upon a fully-fit squad as he prepares to visit Rodney Parade on Friday afternoon.

The Shakers are boosted by the return of talismanic midfielder Danny Mayor from a three-match suspension, while the Greater Manchester outfit boast no fitness concerns.

One to Watch – Danny Mayor 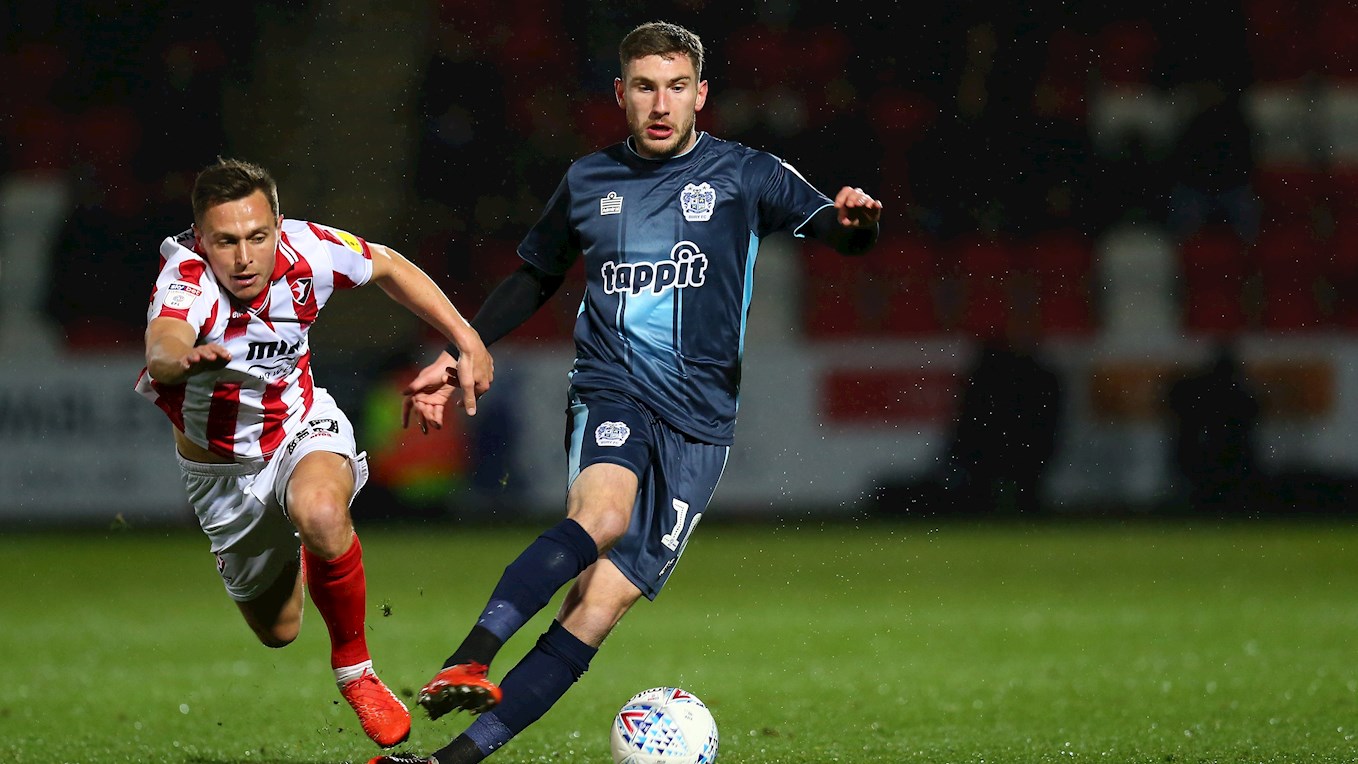 It’s been a magnificent season for the 28-year old who has drawn plaudits from all League Two managers – not just Flynn – and alongside his numerous assists, he’s scored 10 goals from 40 appearances across all competitions.

Mayor has found the target against Crawley Town, Stevenage, MK Dons, Morecambe, two against Grimsby Town, twice against Accrington Stanley in the CheckaTrade Trophy, Oxford United in the same competition and Dover in the Emirates FA Cup.

It’s comfortably beaten his previous tallies for goalscoring seasons, with Mayor having plied his trade in Greater Manchester since a loan spell at the back end of the 2013/14 campaign was subsequently made permanent. 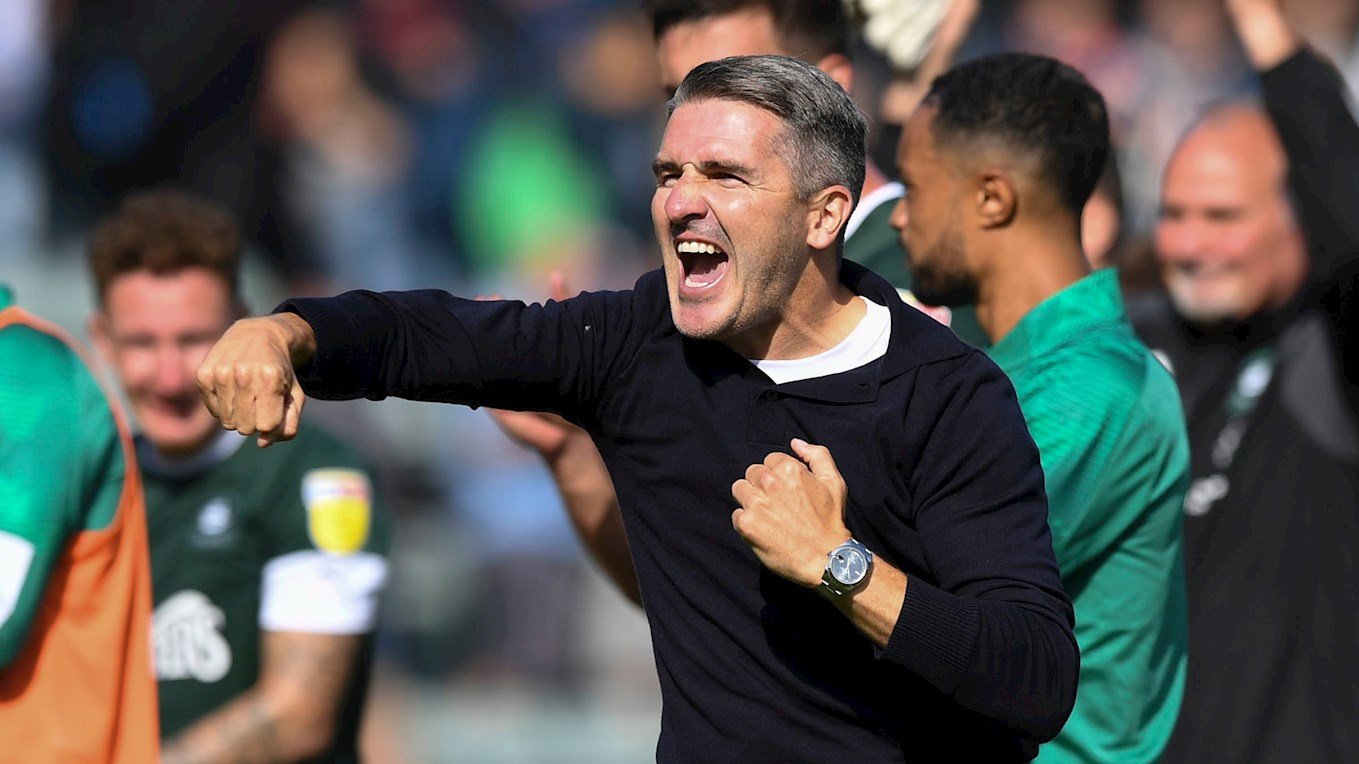 It’s certainly been an interesting start to life in management for Bury FC manager Ryan Lowe as he looks to guide the Shakers back to League One at the first time of asking.

The 40-year old is very similar to County manager Michael Flynn in that he played for the Shakers on three different occasions during his playing career, the last of those spells coming under the role as player/coach in January 2017.

Whilst partaking that duo-role, two managers – Lee Clark and Chris Lucketti – were dismissed meaning Lowe stepped up on two occasions to caretaker manager, although didn’t have the greatest success.

Despite failing to keep the Shakers in the third-tier last season, Lowe was tasked with securing an immediate return and he’s grabbed the opportunity with both hands to leave them in second place ahead of coming to Rodney Parade. A play-off place is basically secured as a worst-case scenario.

His attack minded style – praised by Jurgen Klopp, Pep Guardiola and Rafa Benitez amongst others – has paid dividends with Lowe currently holding a 42.86%-win ratio across the various spells at the helm. He’s won 33 of his 77 matches in charge, drawing 21 and suffering 23 defeats. 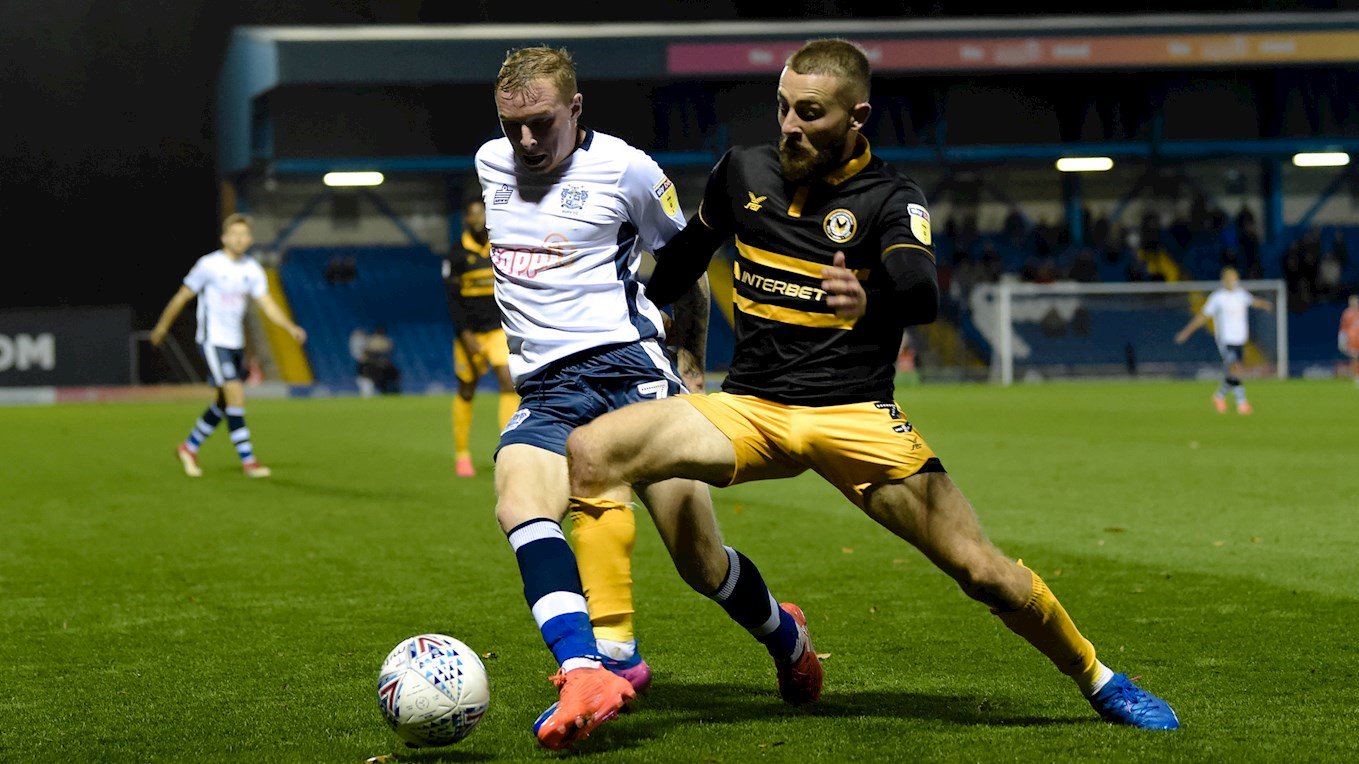 A battling performance from both sides ensured Bury FC and Newport County AFC shared the spoils at the Energy Checks Stadium at Gigg Lane after a 1-1 draw.

It was certainly an enterprising game throughout, with chances coming all the time, although it was the home side to take the lead on 24 minutes through a piece of brilliance by Nicky Maynard. The striker used all his previous Premier League experience to spin Mickey Demetriou on the centre circle, advancing on goal before picking his spot from 25-yards out.

Bury FC had chances to put the result beyond doubt in the early stages of the second-half but found Joe Day in their way. Danny Mayor – on his 300th career appearance – danced his way past four challenges before being thwarted by the shot stopper, while Maynard was denied twice from point blank range.

County refused to go down without a fight and they secured themselves a point when Jamille Matt grabbed his ninth of the season on 56 minutes. Antoine Semenyo sent a beautifully weighted cross into the area, Matt pulled away from his marker to tap home unmarked in-front of the 88 travelling supporters.

Read what Mike Flynn and David Pipe thought of the game. 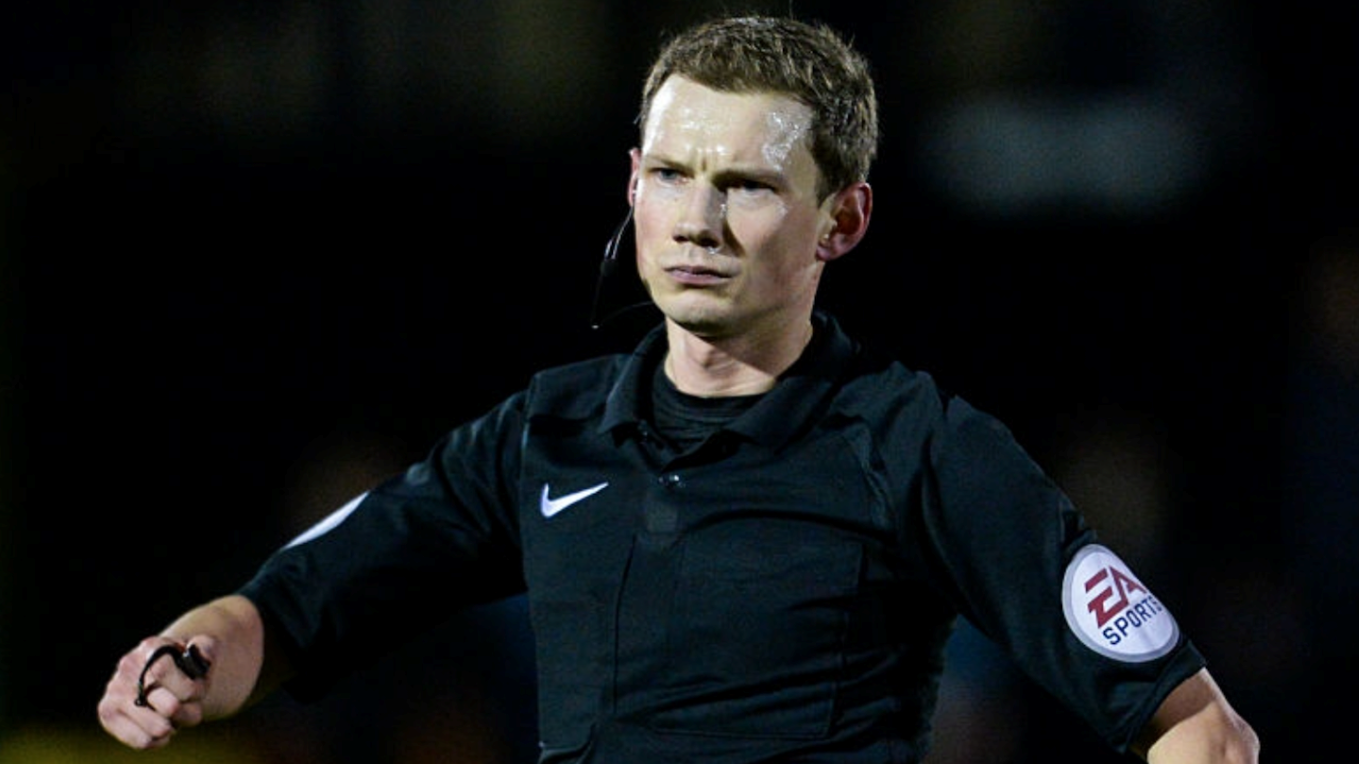 Wright is currently embarking on his first season as a Football League referee having taken charge of his first match in League Two on 14th August 2018 as Stevenage secured a commanding 3-1 away victory at Crawley Town.

He has refereed 33 games so far this season in his debut Football League campaign, giving out 96 yellow cards and six red cards in that time, with Wright most recently giving out one yellow card on 13th April as Peterborough United won 1-0 at Blackpool in League One.

His league high number of yellow cards brandished for a solitary fixture stands at six, a figure he has awarded just once – as Carlisle United won away at Cheltenham Town on 18th August 2018.

That follows on from Wright’s final season as a referee in the National League, where he brandished 70 yellow cards and four red cards from 26 matches across the entirety of the campaign. 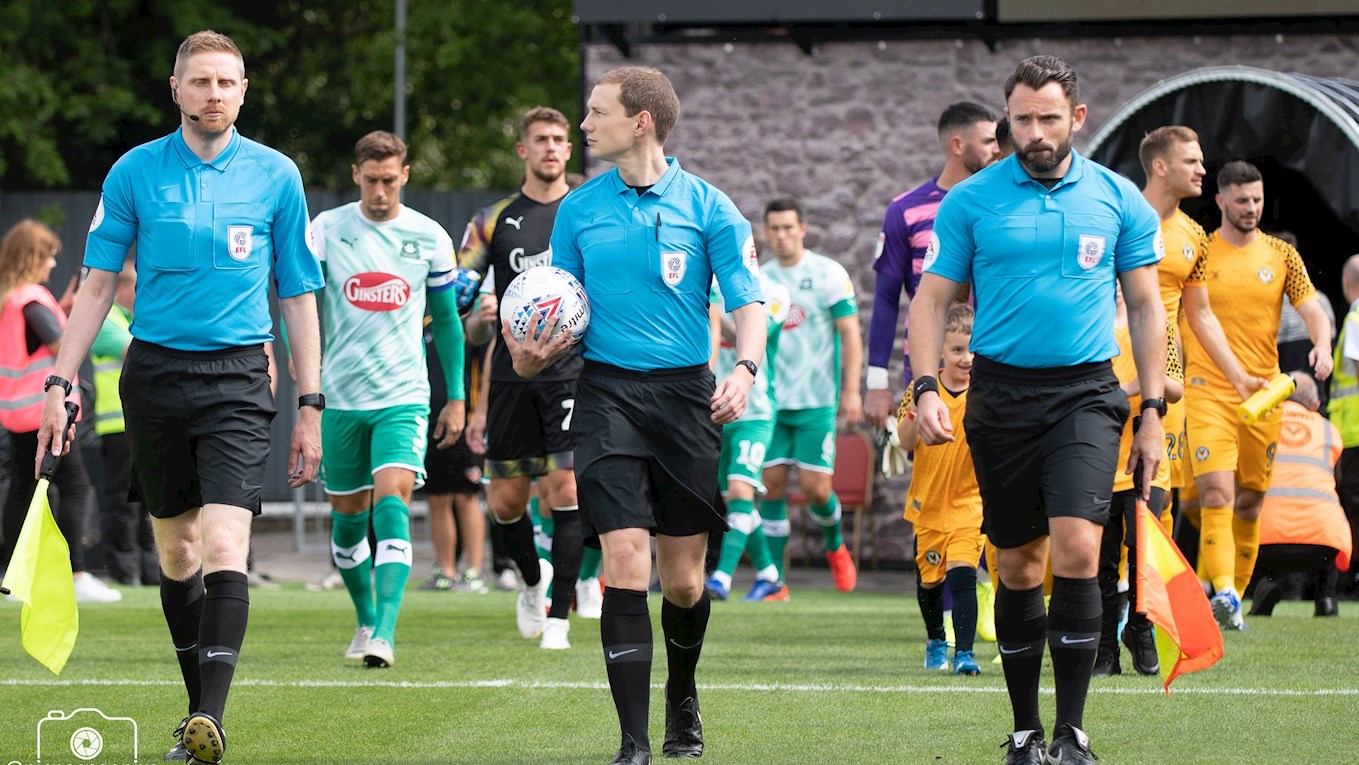 Wright has refereed a match involving Newport County AFC once previously in League Two, but it didn’t exactly go to the plan for the Exiles on that particular occasion.

The match came at Rodney Parade on 15th September 2018 as Yeovil Town made off with a 6-0 away victory. Robbie Willmott was sent off nine minutes from time, while Josh Sheehan saw a yellow card brandished in his direction.

This will be the first time Wright has refereed Bury FC.