Many will remember Gordon Grafft (left) as the man who took a 10,000-mile round trip from California to Newport just to watch the Exiles make history by remaining in the Football League in the last minute of the season. Now, Gordon and Sean McElroy (right) are on another adventure to convince ex-US international defender Jimmy Conrad to become a County fan too – but how did it all begin?

Like many international football supporters, FIFA helped me find the club I support” said Gordan Grafft.  “I fell in love with the history of Newport County and started watching The Amber Army videos on youtube and following the matches on twitter.”

With the unbelievable feats of the team’s Great Escape unfolding, Gordon knew he couldn’t miss the final act of one of the Club’s defining moments.  He took a plane to London followed by a bus journey to Newport to ensure he was at Rodney Parade at 5.30pm on the 6th May 2017.

Whilst initially nervous about heading to the football match by himself, Gordon quickly found that the Amber Army treated him as one of their own.  And since that day, Gordon says “there’s been no looking back”.

Incredible day. Thank you to all for the amazing hospitality. We are staying up and I will be back!!! https://t.co/fh3uMMO4nm

It’s been even easier for Gordon and our other international supporters to follow County this season with the vast majority of EFL League Matches being streamed live on iFollow; Gordon can now watch every match from the comfort of his living room in San Fransisco.

Since returning to the US after witnessing Mark O’Brien’s historic 89th minute winner, Gordon along with his friend Sean McElroy have been slowly convincing ex-US footballer and one of the stars of the MLS, Jimmy Conrad, to become a County fan too.

Jimmy Conrad might not be a household name in Europe, but he’s a great ambassador for football in the US and always genuinely enthusiastic and interested in all of the amazing things going on in the game not just in the US but around the world too.  He’s also one of the US National team’s key promoters and will often be in fan zones ahead of US matches.  Beyond that – if that wasn’t enough – he is also a YouTube personality.

Gordon first met Jimmy in March 2017 at one of these fan zones ahead of the US World Cup Qualifier vs Honduras.   Conrad was challenging people on FIFA and Gordon couldn’t resist taking up the challenge as Newport County; explaining a little about the fans.

The next time they met – just three months later in early June – the great escape had been completed and Gordon had plenty to update him and everyone else on!

Jimmy Conrad himself @JimmyConrad has adopted @NewportCounty as his League Two club of choice!!!! pic.twitter.com/goYOdK89Dc

“We met him again in Colorado before the US vs. Trinidad and Tobago World Cup Qualifier.  This was right after I had returned from my trip to Newport and I was in my County shirt, so we told him about the great escape, got him to adopt Newport County as his league two club of choice and snapped our first picture with him.”

From there, it seemed only right to cement Conrad’s commitment to Newport County as his League Two team and when the Club offered free shirt printing on pre-orders, Gordon couldn’t resist getting Jimmy his own shirt. 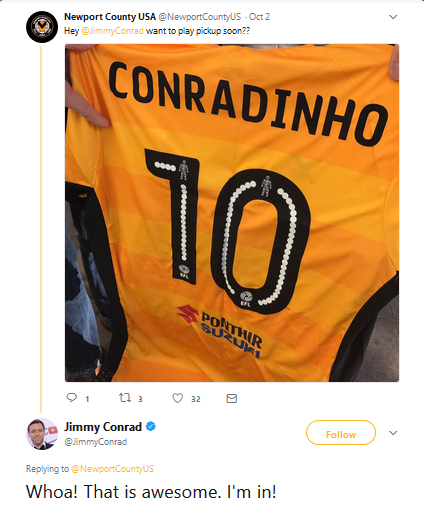 “We figured it was a great opportunity to lock in [Jimmy’s] loyalty and hopefully give some promotion to our USA Supporter’s Club. We ordered the shirt with "CONRADINHO 10" printed and when he organized a pickup game in San Francisco we knew it was the perfect opportunity to deliver it to him.”

We don’t think there are many better gifts in football!

Gordon is hoping to come to Newport again soon to support his beloved Club and we’ll look forward to seeing you Gordon!